Support on Patreon Follow @wellshwood
22 Comments
Enemies of the People. Trump and Sanders, I Mean.

Today White House press secretary Sarah Huckabee Sanders refused to walk back the president’s assertion that reporters are “the enemy of the people.” While President Trump tweeted on 7.19 that “the real enemy of the people [is] the Fake News Media,” his daughter Ivanka said earlier today that she does “not” believe that the media deserves that label. Sanders ignored that statement when questioned by CNN’s Jim Acosta, and stood by the President’s statement. After the Sanders exchange Acosta tweeted that he was “totally saddened by what just happened.” He called Sanders’ refusal to reject the characterization of the press as an enemy as “shameful.”

I’ve been on the Scotty Bowers trail for about a year now, and so when the Brigade guys asked if I wanted to talk to Matt Tyrnauer, director of Scotty and the Secret History of Hollywood, I figured “why stop now?” We met at BUILD studios (corner of Broadway and East Fourth Street), and retired to a kind of green room with free soft drinks and energy bars. Our chat lasted 29 minutes, give or take. A good interview, if I do say so myself. Then I watched Matt sit for an on-camera BUILD interview.

I’ve explained this six or seven times, but most of Tyrnauer’s surprisingly intimate, low-key, non-gossipy film is about old Scotty — a 90something, white-haired pack rat who owns two homes in the Hollywood hills and lives with a good-natured, seen-and-heard-it-all wife who loves him — and only intermittently about the mostly gay and bi movie stars and celebrities (Cary Grant, Spencer Tracy, Walter Pidgeon, Vivien Leigh, Charles Laughton, Vincent Price, Katharine Hepburn, Noël Coward, James Dean) who regarded Scotty as a trusted pimp and pleasure-giver who could and did set them up with same-sex lovers.

Scotty and the Secret History of Hollywood opens tomorrow at the IFC Center. 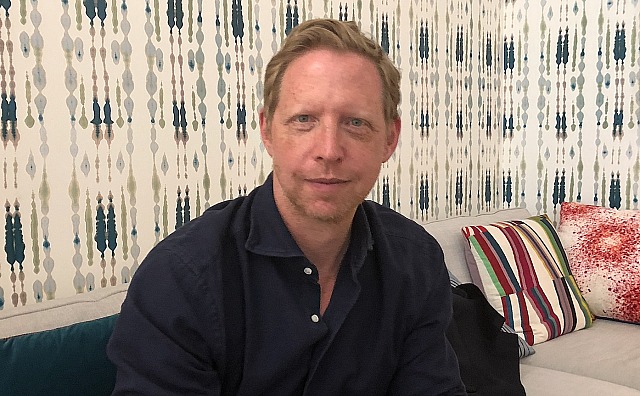 I’ve never seen Dennis Hooper‘s The Last Movie, which has been commonly regarded for decades as a legendary artistic embarassment and financial catastrophe, not to mention the film that killed Hopper’s directing career for over a decade. And yet it’s playing for a week at the Metrograph, starting tomorrow. And I’m asking myself “how many opportunities am I likely to have in the coming years to see this infamous creation in an allegedly restored condition on a first-rate theatre screen?” The answer may be “never again,” and so I’m tempted to catch a late afternoon show.

This is partly due to a near-breathless Village Voice review by Bilge Ebiri, titled “Dennis Hopper’s The Last Movie Is as Essential as Cinema Gets.” He calls it “one of the great lost films of the ’70s,” a statement that deftly sidesteps whether or not it’s any good. 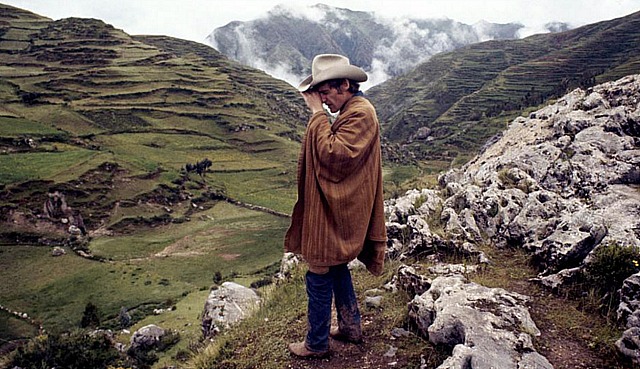 He also says that The Last Movie “benefits from multiple viewings the way 2001: A Space Odyssey or Eraserhead or The New World do; you catch through-lines and details you’d missed earlier, while also developing new mini-fascinations and obsessions. It’s the rare film that seems both clearer and completely different with each viewing. The representational fissures of cinema — the tension between the real and the imaginary, between imitation and inspiration — have been woven into its very fabric.”

Toward the end of the review Ebiri calls The Last Movie Hopper’s “greatest ruin and his greatest triumph,” and says that it leads the viewer to “ask whether anyone but Hopper, the veteran character actor who became an unlikely counterculture figure after Easy Rider, could have made this film. And could The Last Movie have had any other fate than to [send Hopper] off to wander the winds of infamy, a man become a myth, and a myth become a man?”

See what I mean? Ebiri’s prose quickens the pulse. How bad could The Last Movie be? It has to be worth at least one viewing, right?

Then I came upon a sentence that gave me pause: “There is an excellent documentary about this chaotic, destructive period in Hopper’s life, called American Dreamer, which is also a lost classic.” Uhm, no…wrong. I saw American Dreamer back in 2010 and here’s a portion of my review, which I titled “American Boob“: “I was stunned by the doc’s shapeless sloppiness, and amused and repelled by its portrait of Hopper as a bearded, drug-fried horndog on the verge of destroying his directing career with the abomination that was The Last Movie.

Based on the 1974 James Baldwin novel and set in early ’70s Harlem, If Beale Street Could Talk (Annapurna, 11.30) is about how a young African-American couple deals with a false accusation in 1970s Harlem.

The main protagonists are Tish (Kiki Layne), a 19 year-old, and Fonny (Stephan James), a 22 year-old sculptor, and their extended family. Fonny is unjustly accused of raping a Puerto Rican woman, Victoria Rogers (Emily Rios), and is sent to prison. Soon after Tish discovers she’s pregnant. She, her family and her lawyer struggle to find evidence that will free Fonny before the baby is born.

A guy who’s heard from a guy who saw Beale Street says it’s “art-housey…very theatrical and in line with Fences. Feels mostly like Barry adapting a book that was very personal to him. Even smaller than Moonlight and told in overlapping voiceovers, saturated cinematography and lots of montage. Stephan James is said to be the best in show and very charming. The fact that this film deals with sexual assault in an inconclusive manner may turn out to be an issue in this, the #MeToo era.”

Imagine being complacent enough to actually consider buying tickets to see Jaume Collet-Serra‘s Jungle Cruise when it opens on 10.11.19. Imagine being that pliant, that willing. The Disney pic has been shooting in Hawaii since late May.

Dwayne Johnson mentions the example of The African Queen, which was released 67 years ago, and the Charlie Allnut and Rose Sayer characters (played by Humphrey Bogart and Katharine Hepburn) that Johnson and Emily Blunt‘s characters (Frank and Lily) are presumably based upon.

Boilerplate: “Frank, a boat captain, takes his sister and her brother on a mission into a jungle to find a tree believed to possess healing powers. All the while, the trio must fight against dangerous wild animals and a competing German expedition.”

While reading through the Elia Kazan Facebook thread that I mentioned yesterday, I came upon a story about a chat between director Joseph L. Mankiewicz and Marlon Brando on the set of Julius Caesar. It was April of 1952, and news about Kazan having named names in front of HUAC was just getting around. (Not “fresh” names though — Kazan confirmed names that the committee already had.) Brando was aghast, devastated. “What will I say when I see him again?” he asked Mankiewicz. “I truly loved that man, but look what he’s done.” Mankiewicz said something to the effect of “don’t judge or shun him…open your heart and give him a hug…he’s the same man you knew before, and I’m sure he had his reasons.”

In his autobiography A Life, Kazan wrote “I don’t hold people’s faults against them [and] I ask their tolerance for mine.” In the winter of late 1953 and early ’54, or roughly 20 months after Kazan’s testimony, he and Brando joined forces on On The Waterfront, which came to be regarded in some quarters as Kazan’s explanation for the occasional righteousness of testifying against former friend and colleagues. Brando was around when Kazan has given his honorary Oscar in 1999, but he never said a word for or against. They never worked together again after Waterfront. 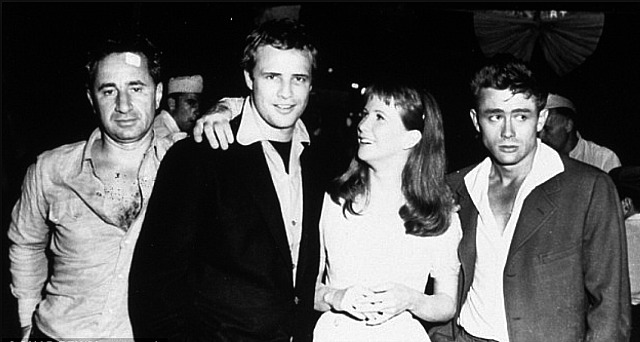 I finally saw Boots Riley‘s Sorry To Bother You yesterday afternoon. I agree with the admirers — it’s a piece of wildly-out-there satire that warrants everyone’s attention and respect. I laughed from time to time and admired the Brittania Hospital-meets-Idiocracy surrealism, but I just didn’t care for the Oakland prison colony vibe (especially after sitting through the tedious, Oakland-based Blindspotting). As much as I got off on Riley’s edge and flamboyance and inventive sidestepping of the usual-usual, I didn’t want to “live” in this film. And that’s a key thing.

I was saying to myself, “Yup…a clever, smart living-in-the-21st-Century-horror flick with a trippy sense of style…thumbs up.” But at the same time it’s basically a film about pervasive tyranny — about economic desperation and miserable 30somethings surrounded by a system that’s trying to turn them into drones and slaves. Yes, there’s a rebellion aspect but the tone is nonetheless dominated by the oppressors. I was feeling uncomfortable less than ten minutes in, and actually doubly so as I knew that if I wrote anything even half-negative that Glenn Kenny would accuse me of being a Grand Wizard.

And yet at the same time I wanted to escape. I’m sorry but I did. Sorry To Bother You made me feel like Steve McQueen in Papillon. It made me feel like a shrieking man-horse, writhing on the floor. I loved Lakeith Stanfield‘s deadpan performance and laughed every time he spoke in his pee-pee “white voice” (actually David Cross‘s), but I liked the presence of Jermaine Fowler more…sorry. Tessa Thompson is obviously fetching (especially since she announced that she’s having an affair with Janelle Monae) but lacks range. Armie Hammer was brought in to satirize his white Winklevoss master-of-the-universe vibe…whatever.

Can I get out of this? I “liked” and “admired” Sorry To Bother You — it’s definitely a film with an attitude of its own and a lot of tricks up its sleeve, and I completely agree that it’ll win all kinds of indie-centric awards early next year. But I’ll never watch it again because on a certain level I felt as if Riley and his cast were more into taking than giving. I nodded glumly at the vision being presented, but I felt as if some essential liquid enzyme was draining out of me as I sat there in my Village East auditorium. I’d rather jump off a 300-foot rocky cliff than become a telemarketer, and this film made me feel as if I was literally stuck doing that.

I had roughly the same reaction to Sorry To Bother You as I did to Steven Soderbergh’s Unsane, which I half liked. The difference is that Sorry is a lot funnier and crazier.