27 Comments
Eyes Have It

The Rilla isn’t anyone’s idea of a knockout, but it’s still the best, I think. Those glowing eyes and white-blonde hairdos, and those wonderfully crisp, steady-as-she-goes black-and-white compositions from dp Geoffrey Faithfull. The film serves as a metaphor, of course, for how older establishment types sometimes regard younger generations with disdain and repulsion, and sometimes even fear or panic. These aren’t our children — they look and behave like aliens.

Socrates and others of his generation felt this way about teenagers, of course, and this is definitely how the WWII generation saw stoned, shaggy-haired ’60s counterculture types in the late ’60s and early ’70s. I don’t see Millennials or GenZ-ers as especially odd or alarming because I’m an enlightened X-factor fellow with a background in authority-defying and psychedelic mysticism, but I do regard the brah culture uniform with absolute horror.

A respected Village of the Damned Bluray popped a week ago, and is available to stream. 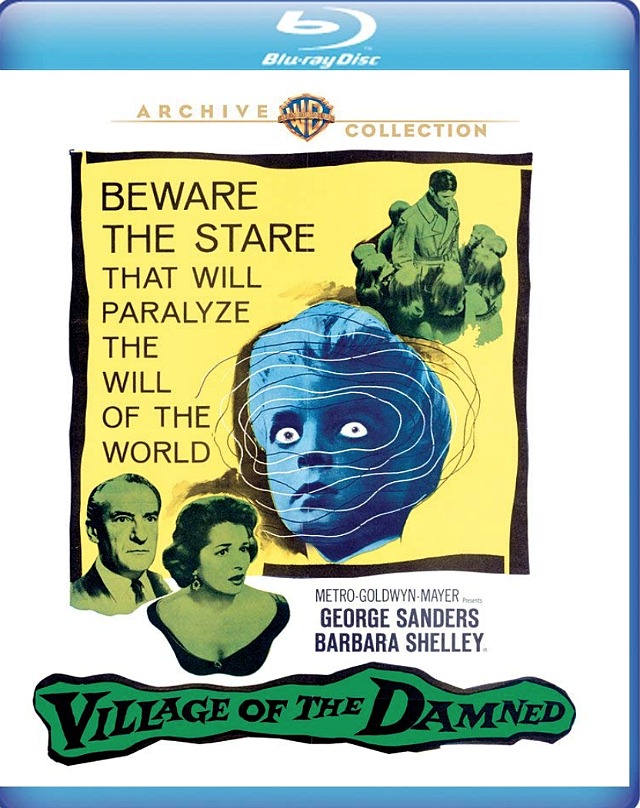 HE-posted on 1.9.14: “In the realm of press releases no word is more phony sounding than ‘excited.’ Whenever someone is hired by a company of any size they’re always, always ‘excited’ about a great opportunity; ditto their employers; ditto any creative or business person or senior management type embarking on any entrepreneurial, cooperative or corporate venture.

“‘Excited‘ is so ubiquitous it’s almost scary. Because people in the business world refuse, bizarrely, to use any other word. Like it’s some kind of code. It’s so commonly used you can pretty much count on the person using it being…I don’t want to say they’re a political zombie but they’re certainly looking to blend in. I’m serious — anyone who says ‘I am very excited about this opportunity’ in a press release can and should automatically be perceived as a joiner, a go-alonger, a Zelig, a drone.

“If you’ve seen the John Carpenter film They Live, you know what kind of person I’m talking about.”

Gunshot squibs are little micro-explosive devices that leak or spray dark-red glop to indicate that a character has been shot. They’re been used by filmmakers for the last half-century or so. The first time I noticed them was during the machine-gun slaughter scene at the end of Bonnie and Clyde. Since the early ’80s I’ve been on dozens of film sets and talked to two or three guys who knew all about squibbing, but I never once heard about squibs being activated by crew guys pulling on fly-fishing lines. These were apparently used in the gangland massacre of Sonny Corleone scene in The Godfather. It seems kind of silly to yank on two or three fishing lines in order to make a bullet hole or two appear. With the sound of rattling gunfire and the screaming and abundant bleeding and the fast cutting who’s going to notice if a little black hole or two suddenly appears on James Caan‘s face? Nobody. 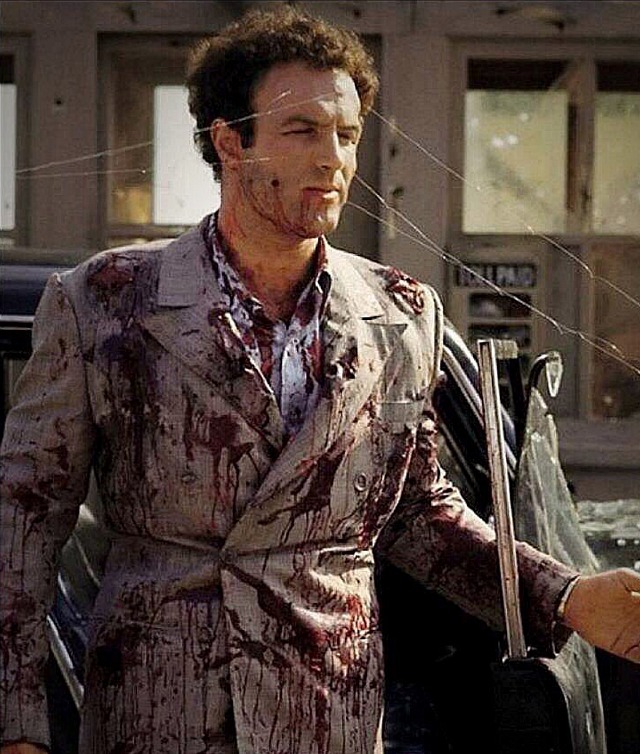 14 years ago I was talking to a gifted, highly respected, somewhat bitter guy who was well acquainted with how big-studio Hollywood worked. The subject was John Moore‘s Flight of the Phoenix, a commercially unsuccesful, not-so-hot remake of Robert Aldrich’s same-titled 1965 original with Dennis Quaid in the James Stewart role.

What may have seemed like an overly angry assessment from “bitter guy” 14 years ago is now par for the course. The production wings of major film studios are largely staffed by soul-less zombies who instinctively flinch at the idea of adult-friendly drama. Marketing films to the empty-Coke-bottle crowd is all. Now we say “of course!” but back then (three and a half years before Iron Man and the eventual MCU/D.C. takeover) it was different. Back then paying $100 million for a movie of this calibre ($65 million to shoot it, $35 million to sell it) seemed exorbitant and wasteful. Back then there was still a belief in some corners about mainstream movies occasionally serving adults.

Here’s how “bitter guy” described the Flight of the Phoenix back-story:

“It was going to be Deliverance in the Gobi desert. The script was about character with everyone slowly going insane as the days went on, and when the new plane was built the pilot [Quaid’s role] is reluctant to fly it because the desert crash was his fault and his confidence is shot.

“And he couldn’t be Mel Gibson. If it was Gibson you’d want to see him do it. You’d be waiting for that.

“Then the studio said they wanted the Bedouins to come back and attack the plane at the last minute, just as they were trying to lift off. But hold on. If the baddy Bedouins are close enough to regroup and gather their forces they must be within shouting distance of some kind of half-civilized outpost, so why don’t the survivors just walk to wherever that is? That didn’t get through. The studio didn’t care about that.

“It was the first movie I ever worked on in which notes on the script were sent along by the head of marketing. Mainly because suddenly the movie was costing $60 to $65 million dollars. The average movie costs $65 million, and then it’s $35 million to open it.

“This business has become so wag-the-dog, so marketing driven. And with $65 million being spent no one can look like they’re really hurt or dying, no one can lose their minds, there can’t be any swearing, and no heavy character stuff.

“There was another stranded-in-the-desert thing called The King is Alive. It was a Dogma movie, didn’t cost anything, same basic deal, people stranded in the wilderness. But on a stripped-down budgetary level. Hollywood doesn’t know how to make a film like that. They don’t want to know, I mean.

Posted on 12.28.04: There’s a scene in Titanic when Leonardo DiCaprio’s Jack Dawson — an independent-minded, self-starting, vaguely bumpkinish guy who lives by his own rules — sits down with a bunch of white-tie swells in the first-class dining room. Jack’s a little intimidated at first, but he stands his ground by being himself and explaining a personal philosophy that’s hard to disagree with, which is to always “make it count.”

It’s not a great scene, but a moderately satisfying one. It instills respect for Jack, and at the same time lends a certain warmth by saying that even the blue-bloods can relax and laugh at themselves and show respect for a guy who can look them in the eye.

There’s a scene in The Aviator when DiCaprio’s Howard Hughes — vaguely bumpkinish, independent-minded, self-starting, living by his own rules — sits down with a bunch of Connecticut swells, or more preicsely the family of his girlfriend, actress Katharine Hepburn.

Howard’s a little intimidated at first, but the Hepburns are absurdly rude and snooty to him, which leads to his getting testy and then a bit rude himself.

“That’s because you have it,” Howard answers.

“Would you repeat that?”

“You don’t care about money because you have it,” he says again. “And you’ve always had it. My father was dirt poor when I was born…”

“Back in torrid Houston, this would be?” asks Mrs. Hepburn.

Supporting HE excerpt #1: “Here is reason #1 why hinterland bubbas are squarely behind Donald Trump. Here are reason #2 and reason #3. They’re behind this megalomaniac because he’s leading the last-gasp charge in defense of a white heirarchy that ran the show as recently as 15 or 20 years ago. That era is over and the flannel-shirters who don’t have the right kind of skills for the 21st Century economy know it, but they’re nonetheless determined to go down swinging like Bill Holden, Ernest Borgnine, Ben Johnson and Warren Oates at the end of The Wild Bunch.” — from “Bubba’s Hurtin’ Too Much To Care,” posted on 5.31.16.

Supporting HE excerpt #2: “Ever since the fall of 2016, when Republican Senate Majority Leader Mitch McConnell privately turned down an Obama-administration proposal for a bipartisan warning to Russia not to interfere in the election, the underlying dynamic has been set: Most Republicans would rather win an election with Putin’s help than lose one without it.” — from Jonathan Chait’s 7.8.18 New York article, “Will Trump Be Meeting With His Counterpart Or His Handler?”

Supporting HE excerpt #3: “Roy Moore: “The hand of God…providence…put Trump into the White House.” [Few seconds later] “You could say that America is the focus of evil in the world.’ Guardian: “For example?” Moore: “Same-sex marriage.” Guardian: “That’s what Putin would say.” Moore: “Maybe Putin is right.” — from “Alabama Recalcitrance,” posted on 12.10.17.

“Trump calls the media the enemy of the people, except for Fox News…they’re so far up Trump’s ass they’re the enema of the people.”