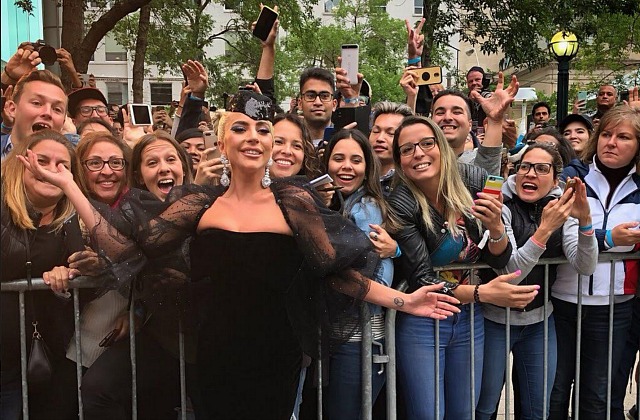 These same people would never take selfies with Alfonso Cuaron. Almost all of them have seen Gravity, and I’ll bet 97% of them don’t have a clue who Cuaron is. The mere prospect of trying to learn who he is would give most of them a splitting headache. 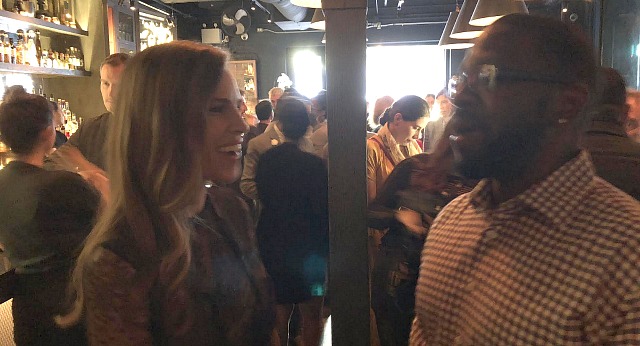 Yesterday afternoon I dropped by a party for Elizabeth Chomko’s What They Had, which I’m seeing tonight at the Elgin. The highlight was chatting with Hillary Swank for a couple of minutes. This may be the worst-quality photo (i.e., Swank talking with Blackfilm’s Wilson Morales) I’ve ever posted on Hollywood Elsewhere. 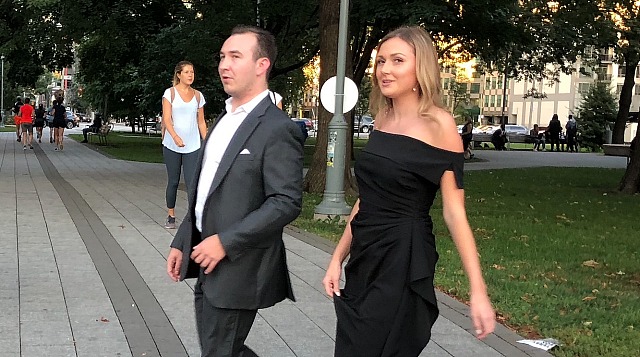 Jacques Audiard‘s The Sisters Brothers (Annapurna, 9.21) is a grimy, gunky wad of episodic, half-comedic western nihilism — aimless, wandering, constant gunplay and fuck-all violence at nearly every turn. It ambles and shuffles along in a loose, tension-free way that tests your patience and has you begging for a conclusion at the one-hour mark. Unfortunately you have to sit there for another full hour.

At the very beginning there’s a cool-looking nocturnal gunfight in which extra-bright lightning gun blasts illuminate the darkness a bit more than they probably would in actuality. That’s the one thing I genuinely admired about this film.

Otherwise I found the second half agonizing. Almost everyone dies in a fairly brutal and bloody way, and all the characters, it seems, are negligible and not worth giving a fuck about, and none of it amounts to squat. Everyone has bad teeth and is covered in grease and dirt or are dressed in smelly boots and stinky socks or a combination of all five, and it’s all on the level of “Jesus H. Christ, what did Audiard and Annapurna see in this material? Dear God, please…lemme outta here.”

Except I was stuck in the middle of a big IMAX theatre (#12 in the Scotiabank plex) with about 15 people to step over or around on either side, and I was asking myself “which is worse, staying to the end or irritating all these people as I make my way out?” I decided it would be more honorable to tough it out.

John C. Reilly and Joaquin Phoenix play the titular characters. Reilly’s Eli is the wiser, gentler and more thoughtful of the two, or at least is less grunty than Phoenix’s Charlie Sisters, and so he delivers a more affecting performance. (I guess.) Jake Gyllenhaal and Riz Ahmed are of passing interest (good acting but I couldn’t have cared less about their characters) in supporting roles. Rutger Hauer plays the Commodore, the Sisters Brothers’ boss. I didn’t even recognize Carol Kane, who appears at the very end as Reilly and Phoenix’s mother.

Here’s what Norm MacDonald said in yesterday’s Hollywood Reporter-Seth Ambramovitch interview that the Maximilien Robespierre cabal wanted to behead him over.

“I’m happy the #MeToo movement has slowed down a little bit.” (Due in part to the Asia Argento and Aziz Ansari episodes.) “It used to be, ‘One hundred women can’t be lying.’ And then it became, ‘One woman can’t lie.’ And that became, ‘I believe all women.’ And then you’re like, ‘What?’ Like, that Chris Hardwick guy I really thought got the blunt end of the stick there.

“The model used to be ‘admit wrongdoing, show complete contrition and then we give you a second chance‘. Now it’s ‘admit wrongdoing and you’re finished‘. And so the only way to survive is to deny, deny, deny. That’s not healthy — that there is no forgiveness.

“I do think that at some point it will end with a completely innocent person of prominence sticking a gun in his head and ending it. That’s my guess.”

Here’s what got him in trouble: “There are very few people that have gone through what [Rosanne Barr and Lous C.K.] have, losing everything in a day. Of course, people will go, ‘What about the victims?’ But you know what? The victims didn’t have to go through that.”

MacDonald meant that the victims didn’t see their lives and careers wiped in a matter of hours or a few days.

The #MeToo response would be “maybe not, but they were muscled and gangstered by powerful people into submitting to sexual propositioning, and that is very cruel and damaging.”

It has struck me from the beginning that the #MeToo punishments lack proportionality.

If a guy is pulled over for drunk driving, you don’t take him out to the woods and hang him from the nearest tree. You take his driver’s license away, you demand that he get alcohol treatment counselling, maybe give him some probation or jail time. But you don’t put a bullet in his head.

I’ve never watched a single film on my Sony 65″ HDR 4K TV with the “aid” of motion-smoothing, which makes everything look overly fluid and video-tapey and generally removes the scrim-texture of film. But as appalling and repellent as motion-smoothing is, I’m strangely attracted to using it when watching old black-and-white films.

There’s something hypnotic about watching, say, William Wellman‘s The Public Enemy, which I’ve seen several times since I was a kid, with the motion-smoothing effect. Shot 87 years ago, this rickety-feeling James Cagney gangster flick is a formally framed, somewhat squawky-sounding film for the most part, but with motion smoothing it feels (and I know I’m not supposed to say this) cleaner, fresher, less antiquated.

In any event, the motion-smoothing option may eventually be removed by TV manufacturers. Or at least removed as an easy default option. If Christopher Nolan and Paul Thomas Anderson have anything to say about it, that is. The directors are reportedly talking to TV manufacturers in the UHD Alliance about implementing a universal “reference mode” that would kill motion smoothing and thereby make films look like they do in theatres, which is what their creators have always intended.

From a letter reportedly sent by the DGA to members: “Many of you have seen your work appear on television screens looking different from the way you actually finished it. Modern televisions have extraordinary technical capabilities, and it is important that we harness these new technologies to ensure that the home viewer sees our work presented as closely as possible to our original creative intentions.”

“TV manufacturers are reportedly open to the idea, but want to know specifics on what would be important to directors. The survey includes questions like ‘How important is it to you to have a simple way to get consumers’ home TV setup similar to monitors in the color-grading suites for viewing film and television content that YOU created?’ and ‘Would you expect this ‘reference mode’ to be called the same thing on different manufacturers of TVs?'”

Handsomely lighted by Loyal Griggs but otherwise a typical Cecil B. DeMille scene with an emphasis on old-fashioned “acting”, which is pretty much inevitable given the theatrical-sounding dialogue (written by Aeneas MacKenzie, Jesse L. Lasky Jr., Jack Gariss and Fredric M. Frank), which is steeped in stiff, faux-Biblical pretentiousness. But the youngish Yul Brynner (who was somewhere around 35 when he acted in The Ten Commandments) and Edward G. Robinson (62 at the time) make this scene work regardless. Because their acting skills and naturally grounded presence overcome the DeMille bullshit. This is what you want when you cast a film — actors who are good and gifted enough to make your crappy dialogue sound better than it is, and to make your film not seem as if it’s been shot on a sound-stage set.

Be mindful and take heed of the Guy Lodge brigade, already grousing and muttering about Green Book overpraise and loading their weapons as they ready a pushback movement as soon as possible. Have they actually pushed back yet? No, but they will — I can smell their thinking from thousands of miles away. For 12 hours the Green Book reception was a Toronto rainshower of love. Now it’s a coming war, skirmish, street fight, fisticuffs. 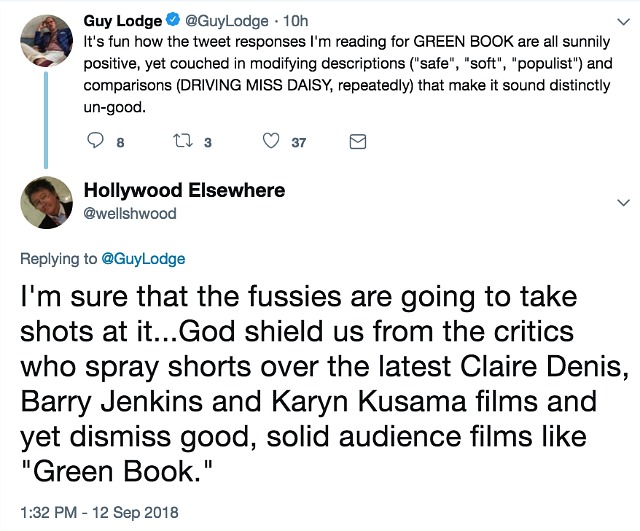 The Gold Derby team needs to understand the Viggo Mortensen-Mahershala Ali Green Book award-season strategies. I’ve been told that Team Viggo is going for Best Actor while Mahershala’s people want to run him in supporting, the thinking being that Viggo gives a showier performance and that his mildly racist goombah character undergoes a bigger growth arc over the course of the film. So Gold Derby programmers need to insert Mahershala as a Best Supporting Actor option. Right now he’s missing in this context, which is why my Best Supporting Actor spitballs don’t include him. If Mahershala was part of the Gold Derby tray he’d be right at the top.

I’m otherwise slightly confused or dithering about current Best Supporting Actor picks. I’m 100% firm on Mahershala as well as Sam Elliott in A Star Is Born, but beyond these two I’m not feeling a great deal of passion.

HE commenters have responded to my Green Book rave. Last night “The Cinemaholic” claimed that “post-TIFF, the following films are (almost) confirmed” to receive a Best Picture nom — Roma, First Man, A Star Is Born, Green Book and If Beale Street Could Talk. He further asserted that The Favourite and Can You Ever Forgive Me? are “likely but not guaranteed.”

This prompted “RossoVeneziano” to comment that “The Favourite is much ahead of Green Book LOL,” whatever the hell that means.

My response: If Beale Street snags a Best Picture nom, fine, but my gut suspicion is that it’ll be a miracle if that happens. Don’t buy into the Toronto hype-and-denial hymnbook. It’s a “good”, handsomely composed film with a palpable love current, but it’s definitely an endurance test. It made my petals wilt.

The Barry Jenkins brigade was out in force during that first Princess of Wales screening, and 90% of the critics (pre-cooked admirers of Barry’s gentle, meditative, Wong Kar Wai aesthetic) followed suit in order to play it safe. No downside if they praise it, but if they don’t finger-pointers might begin to question their loyalty to progressive identity politics.

The Favourite is a witty, visually distinctive, Barry Lyndon-like, political-conflict comedy between a pair of shrewd schemers (Rachel Weisz, Emma Stone), but it’s not an audience-pleaser with the button-pushing potency of Green Book.

Yorgos Lanthiimos’ film is therefore not, as of this morning, “much ahead” of Green Book in the Best Picture competish. I think they’re side by side right now, with the Peter Farrelly film currently enjoying a euphoric bounce off of last night’s TIFF screening.

And then “Mark VH” asked if Green Book is “better” than Hidden Figures, which he thought “was one of the most satisfying movies of its kind I’d ever seen (didn’t much care for The Help). Sounds like this is gonna be right up my wife’s alley, as she loves this kind of thing.”

My response: As a well-crafted period piece about pride, smarts and diligence pushing back against racial barriers, Hidden Figures was somewhere between a double and a triple. Set in the same era (early ‘60s) and mining a somewhat similar theme, Green Book is somewhere between a triple and a homer. It’s also, in my book, occasonally funny as shit (Hidden Figures used humor here and there) and generally more entertaining with a better, more deep-down third act. Farrelly’s film, no offense, is a LOT better than “my wife will like it.”