Support on Patreon Follow @wellshwood
7 Comments
And On That Note…

One of the best iPhone snaps I’ve ever taken in Italy. The light was perfect and the silhouette effect with the trees was flawless. Just lucky, I guess. Taken near Panzano, looking south, on or about 5.29.17 in the late afternoon. 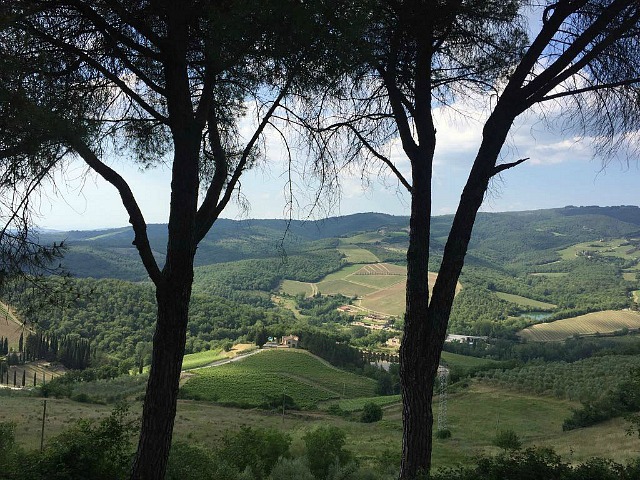 I’m not sure if the following notion is worth exploring, but I’m wondering which noteworthy 21st Century films would be enhanced if you watched them while tripping on LSD. I say this not having come within miles of the stuff since the pre-Watergate Nixon administration, but there used to be this notion that certain films would take on a quality of dimensional extra-ness (more poignant, hilarious, emotional, profound, meaningful) if you watched them after dropping a tab of Orange Wedge or Blue Cheer.

Curious as this might sound, Sydney Pollack‘s Castle Keep, which is kind of a trippy film to begin with, plays really well under this condition. So do Peter Bogdanovich‘s The Last Picture Show and What’s Up, Doc?. But not Targets.

Dispensing with any notions of awards or nominations, here are HE’s favorite 2018 films (i.e., a combination of the most artful and emotionally satisfying) as we speak, and in this order:

At one point Seth Meyers‘ jailbird character says to Kenan Thompson‘s “Bill Cosby”, “This is gonna sound mean but have you ever considered just dying?” Cosby is an animal, I know, but that’s not funny.

An earlier incarnation of this post appeared on 9.15.14: My childhood was a gulag experience. So were my teens. Things started to get a little better when I began as a film journalist but my life didn’t really pick up until ’80 or thereabouts. And even then it was constant struggle, struggle, toil and trouble. Aleksandr Solzhenitsyn may have lived a tough life but so did I.

I started to feel really badly about life’s possibilities when I seven or eight. The misery seemed to intensify when I turned 11 and 12, but the onset of puberty seemed to make things worse in so many ways. I used to argue with myself about which parent I despised more, as they were awful in their own specific ways. My only encounters with happiness, however brief, came from hanging with certain friends and catching new films at my local theatre (the Westfield Rialto) and on WOR’s Million Dollar Movie or the CBS Late Show when I visited my grandmother, who would always let me stay up as late as I wanted.

My home town of Westfield, New Jersey, was a pleasant enough place, but the social aggression and general bullshit in junior high school meant there was always a taunt and a challenge and some kind of shit going on behind your back. A fairly rancid atmosphere. Everything was awkward or tortured or tedious.

My basic response was to say “fuck this concentration camp and the fucking rules you have to live by or live up to,” and to start living in my own realm, which for me meant the universe of cinema. At age 13 or 14 I got into the habit of taking the bus into Manhattan (a secret mission as my parents wouldn’t let me go alone) and just roaming around Times Square and looking at the various marquees and just soaking it all up. I’d take the bus in the late morning, visit Mecca for three or four hours and get back for dinner by 5 or 6 pm. I paid for these trips with my modest weekly allowance plus a little extra lawn-mowing money.

I used to love the smell of bus exhaust inside those Port Authority parking areas. To me those fumes were the city itself — they smelled like oxygen.

James T. Wells, Jr., my witty, well-educated, occasionally surly dad, died a little more than a decade ago. He wasn’t always surly — he could also be snappy and sullen. He also did grumpy. I posted the following on 6.21.08:

My father had 86 years of good living, mostly. He was miserable at the end, lying in a bed and watching TV, reading and sleeping and not much else. I think he wanted to go because his life had been reduced to this. He was a good and decent man with solid values, and he certainly did right by me and my brother and sister as far as providing and protecting us and doing what he could to help us build our own lives.

But he was also, to me, a crab and a gruff, hidden-away soul (his Guam and Iwo Jima traumas as a Marine during World War II mashed him up him pretty badly) and even, it seemed at times, something of a bitter curmudgeon. But not altogether.

I feel very badly for his suffering the indignities of old age and the mostly horrible life he lived over his final year or two. I know that whatever issues I have with my manner, attitude or personality, it is my charge alone to deal with, modify and correct them. But I also know deep down that Jim Wells was the father of it. He lived in a pit so deep and dark you needed a kleig light to see around.

He was a lifelong Democrat who hated John Wayne for his pro-war posturings. He liked Simon and Garfunkle but never got the Beatles, which always flabbergasted me. He actually thought that Michael Herr‘s Dispatches was a waste of time. My brother tried to get him to watch The Limey and he wouldn’t do it. He lived in his own world and could be a real pain to hang with at times. He was foul and nasty and a snappy contrarian about everything during a trip we took to Lake George about 12 years ago. My son Dylan (who was with us) and I did everything we could to escape his company.

I distinctly remember feeling tear-struck in 1986 when I learned of the death of Cary Grant, whom I’d always regarded as a beloved debonair uncle of sorts. I didn’t feel anything close to that when I heard the news about my dad the night before last. The truth is the truth.