Richard Curtis‘s Love Actually opened 15 years ago, and I’ve read some happy tweets about this. Hence this four-year-old riff about this Universal release, which made $246 million worldwide. I recall enduring this thing like it was yesterday.

People are obviously entitled to love what they love and share their enthusiasm, but I immediately despised the dipshit sentimentality.

“I believe that Curtis has done more to sugarcoat and suffocate the romantic comedy genre than any other director-writer I can think of,” I wrote in 2013. “If there’s someone else who has injected his films and scripts with more mirth, fluttery-ness and forced euphoria, I’d like to know who that is.”

I remember recoiling at an early voice-over line that mentioned how people on the hijacked 9/11 planes called their significant others, families and lovers to say “I love you.” This didn’t sound to me like an affirmation of love as much as an expression of the panic anyone would feel in this situation.

“Curtis has no discernible interest in ground-level reality,” I continued. “When writing romantic material he seems interested only in those first-surge-of-hormonal-excitement moments when an attractive man and a dishy woman can finally let their true feelings out and look into each other’s eyes, etc.”

As Bill Maher pointed out last February Love Actually is almost entirely about older guys hitting on their underlings. It certainly wouldn’t pass muster with the #MeToo crowd.

During my one and only viewing, I was comparing Love Actually in my head to Robert Stigwood‘s Sgt. Pepper’s Lonely Hearts Club Band.

Curtis can turn his life around starting today and write and direct nothing but masterpieces henceforth (he’s currently working on an untitled Beatles-related film with Danny Boyle), but he will never atone for Love Actually.

Director Nicolas Roeg has passed at age 90. Hugs and condolences to all concerned. Then again he lived a long, colorful life (born in ’28) and enjoyed a good creative period as a cinematographer during the ’60s (Lawrence of Arabia, Doctor Zhivago, Petulia) as well as a flush directing streak in the early to mid ’70s. No sadness in that.

Roeg’s finest three films, of course, are Walkabout, Don’t Look Now and The Man Who Fell to Earth. And also, don’t forget, Performance, which he partly directed with Donald Cammell. I’m sorry but I was never down with the creepy Bad Timing or the twitchy Alaskan prospector flick, Eureka, which starred Gene Hackman. Nor was I into Insignificance, his light-hearted Albert Einstein movie.

I was, however, half-taken with Castaway, which I wrote the press notes for while working for Cannon publicity. My phone interview with Oliver Reed didn’t go well — I tried not to rub him the wrong way but I said something about his character being a bit of a lazy sod. Things went downhill from there on.

No Comments
Despite My Reservation

I’ll never be happy with Criterion’s decision to cleaver their Some Like It Hot Bluray down to 1.85 (i.e., slicing the tops and bottoms off the slightly boxier 1.66 version). I’ve said this two or three times; I really hate it.

But I watched the Criterion disc last night and I have to report that the 4K remastering is the stuff of Bluray orgasms. The 2011 MGM Bluray is wonderful also, but the Criterion is…how to put it? Blacker, a bit more detailed (Pat O’Brien‘s checked overcoat has to be seen to be believed), cleaner, crisper, more glistening, more sugary. I could watch it again right now. Congrats to everyone involved and particularly Sony restoration guy Grover Crisp, who presided over the re-do.

And here, by the way, is an excerpt from Howard Suber’s brilliant commentary track. It partly explains how the basic scheme of all great comedies — desire, deception, discovery — adheres during the finale of Some Like It Hot. 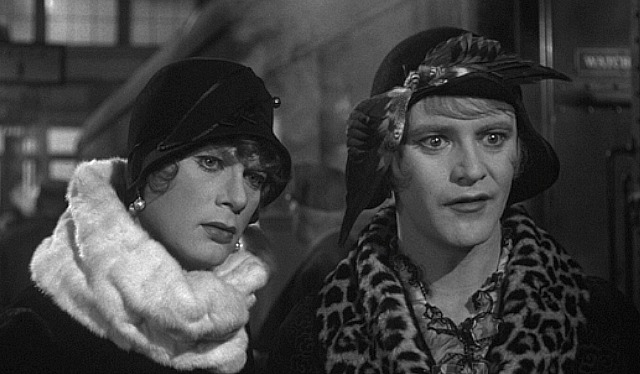 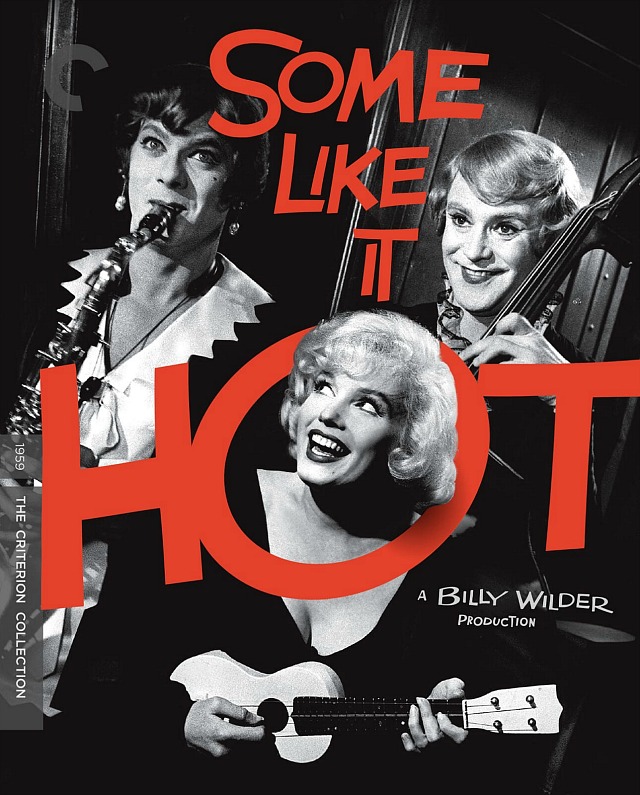 It’s about values, decency, consideration for others — either you get it or you don’t.

Green Book, by the way, is #3 at the box office this weekend in terms of per screen averages. Averages are what really count. Julian Schnabel‘s Eternity’s Gate is #1, and Grindelwald — the number one grossing film in terms of sheer volume — is actually number two in filling the seats.

I’ve posted five or six riffs about how Beto O’Rourke has to run against Donald Trump in 2020 — no ifs, ands or buts. An 11.11 Hill piece by Amie Parnes (“Beto 2020 Calls Multiply Among Dems“) stirred the pot a bit. Last Tuesday a similar piece by Politico‘s David Siders had a snap-crackle-pop effect.

“The prospect of a presidential bid by O’Rourke, whose charismatic Senate candidacy captured the party’s imagination, has suddenly rewired the race,” he wrote. “O’Rourke — who raised a stunning $38 million in the third quarter of his race — is widely considered capable of raising millions of dollars quickly, according to interviews with multiple Democratic money bundlers and strategists, catapulting him into the upper echelons of the 2020 campaign.”

The implication of the Siders piece is that O’Rourke will need to pull the trigger by early ’19, certainly by March or April if not before.

Excerpt: “Mikal Watts, a San Antonio-based lawyer and major Democratic money bundler, said several donors and political operatives in Iowa, after hearing from other potential candidates in recent days, have called to ask whether O’Rourke is running, a sign of his impact in the first-in-the-nation caucus state.

“They’re not wanting to sign on to other presidential campaigns until they know whether Beto is going,” Watts said. “And if Beto is running, what good progressive Democrat wouldn’t want to work for Beto O’Rourke?”

Once again, O’Rourke will beat Trump because (a) he’s a blend of Barack Obama, Bobby Kennedy and Bill McKay, and will enlist the enthusiasm of younger voters, (b) he’s 16 or 17 times smarter and more knowledgable than Trump, not to mention more eloquent and principled, (c) is 26 years younger than Trump, (d) at 6′ 4″, he’s roughly two inches taller (and the taller candidate almost always wins), not to mention a lot thinner, (e) he skateboards and (f) played in a band in the ’90s. A changing of the generational guard — sold.

Late November is a good time to catch films in cinemas, of course, but otherwise the megaplex experience is generally a must-to-avoid, or at the very least a touch-and-go thing. Mainstream movies have been declining for many decades, and always because of stupid audiences.

In the early ’50s Manny Faber wrote an influential essay called “Blame the Audience,” although if you consider what was playing in Manhattan in the late summer of 1953 it’s hard to understand what he was on about.

In 1964, Pauline Kael asked “Are the Movies Going to Pieces?” in The Atlantic Monthly, claiming that “the younger generation’s embrace of crudely made films and the intelligentsia’s fondness for intentionally confusing ones was responsible for Hollywood’s decline.”

On 1.21.72, right in the middle of the grandest, funkiest and most fabled era of auteurist glory, Dick Cavett asked four directors — Robert Altman, Mel Brooks, Peter Bogdanovich and Frank Capra — if Hollywood was dead. He didn’t mean L.A.-centric filmmaking but the big-studio system that reigned from the ’20s through the ’50s. He was also observing that corporations and corporate-think had taken over from old-school moguls like Harry Cohn, Daryl F. Zanuck and Louis B. Mayer.

On 6.23.80 Kael published her famous New Yorker broadside — “Why Are Movies So Bad or, The Numbers” — about the increasing corporate influence upon Hollywood filmmaking culture.

I first began to sense the onset of megaplex theme-park cinema and the general loss of the spiritual in the early ’90s…a general feeling of alienation from the concept of theatres-as-churches and a gradual slide into the swamp.

12 and a half years ago I wrote that “movies are a religion and, whether some of you get this or not, going to see the best movies is the same thing as going to church and, in a manner of speaking, taking Holy Communion. They’re about values (philosophical or otherwise) and emotion and contemplation and quality of life. Even the shallowest people out there understand that the best movies contain and in fact propel notions of spirit and emotion and transcendental recognition.”

Movies are doing well enough in some respects (via this and that format), but that communal, church-like atmosphere in theatres…when was the last time you felt it?

I honestly wonder if deep-soul qualities in films (i.e., the kind of thing you can sense in abundance from Alfonso Cuaron‘s Roma) are of any importance to the New Academy Kidz, the p.c. militants, the representation and identity-politics crowd.

On 7.17.06 I wrote that “some may see going to a just-opened movie as a kind of cathartic Southern Baptist service (talking back to the screen, letting it all out, etc.), but most people probably see movies as a kind of sporting event or mass video game or amusement ride.

Clint Eastwood made his bones in the ’60s and ’70s with brutal, emotion-less dispensations of violence — by projecting a capability and willingness to drill the bad guys between the eyes without blinking an eye and certainly without giving it much thought. He wasn’t as much two-fisted as big-gunned, and he sure as hell blam-blammed a whole lot of guys during his “Man With No Name” meets Dirty Harry heyday, and with rightwing justifications, of course. “You fuck with me, you’ll pay the price.”

He was never anyone’s idea of a great or highly skilled actor, but he always knew how to deliver that silent, steaming-radiator thing and was certainly effective within his range. I think his Unforgiven performance (i.e., the snarly Bill Munny) was actually pretty close to great, partly because of (a) “helluva thing, killin’ a man,” “(b) “we all got it comin’, kid” and (c) how that final shoot-out scene draws upon our collective memory of the snarly guy he was in the Nixon, Ford and Carter eras.

But when we think of Eastwood we mainly sink into a soothing impression that took hold in the early to mid ’90s, which was when he suddenly became this exalted, almost mythical-level actor and director — one on hand with his aging, guilt-ridden secret service agent in Wolfgang Petersen‘s In The Line of Fire (’93) and on the other as the director who delivered the one-two punch of Unforgiven (’93) and The Bridges of Madison County (’95).

And at the same time his reputation as a likable, laid-back, salty-haired guy who always shot films fast and unfussy and who occasionally described himself as an Eisenhower Republican…all of that sunk in too. Even his briefly warming to Sarah Palin + talking to the empty chair thing…even that didn’t dispel the genial vibe.

And here we are on the 2018 home stretch and still no word of any Mule screenings, which reenforces suspicions that it’s probably nothing too special, even with Eastwood giving what may be his last performance…who knows?