Snapped sometime prior to the 6.1.55 premiere of Billy Wilder‘s The Seven Year Itch. I tried watching this 20th Century Fox sex comedy a couple of years ago, and I couldn’t stay with it — it’s tedious, labored, constipated. I smirked a few times but I didn’t laugh once — not once. Tom Ewell wants to ravage Marilyn Monroe but he’s too chicken. On top of which I think his off-screen orientation came through on some level. I didn’t believe him.

Itch was the second of five ’50s films directed by Wilder during his “house director” phase, so-called because these films represented a creative hibernation for the director of Double Indemnity and Sunset Boulevard. The usual Wilder traits — cynicism, opportunistic characters, smartass dialogue, ironic turnarounds — weren’t entirely absent in Sabrina (’54), The Seven-Year Itch, The Spirit of St. Louis (’57), Love in the Afternoon (’57) and Witness for the Prosecution (’57), but they were in relatively short supply. Wilder finally returned to form in ’59 with Some Like It Hot.

The house phase began in the wake of the success of Wilder’s Stalag 17 (’53), although the primary factor, I’ve always believed, was the failure of Wilder’s caustic and ultra-cynical Ace in the Hole (’51). After that film bombed critically and commercially, the word went around that Wilder needed to retreat from his hard-edged material and ease up for a while. He did. 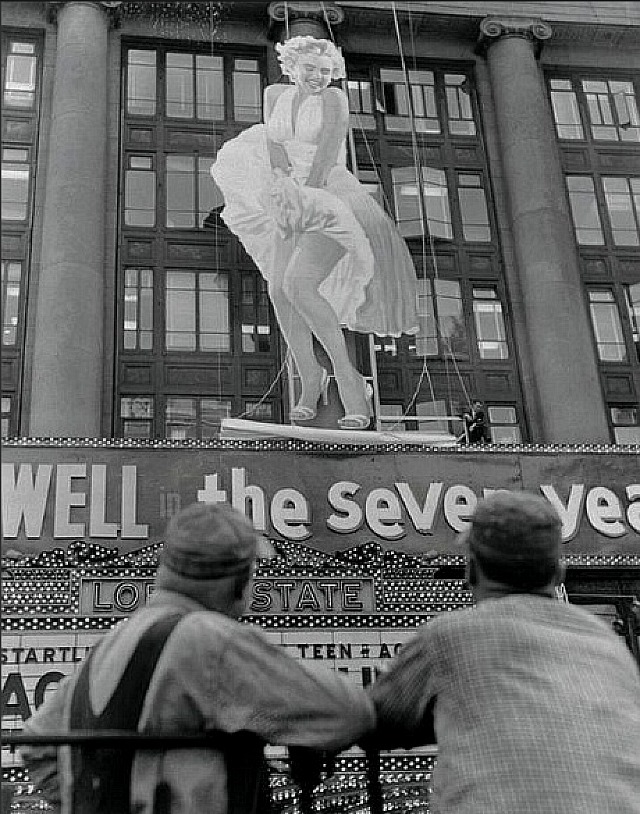 I just had a chat with World of Reel‘s Jordan Ruimy about the New York Film Critics winners, particularly Regina Hall winning the Best Actress trophy for her performance in Support The Girls. Along with a little David Edelstein (but not too much), a discussion of the 18 films on Eric Kohn’s best of the year list, and a little mondo bizarro Beto O’Rourke vs. Hillary Clinton speculation. It’s cut into two portions — part #1 and part #2.

Congrats to Regina Hall for winning the NYFCC’s Best Actress award for her performance in Andrew Bujalski‘s Support The Girls. Which I didn’t bother to see, frankly, because it didn’t seem substantial enough, and because it opened two days before the start of the 2018 Telluride Film Festival.

Nobody and I mean nobody had put Hall’s performance on their Best Actress short list over the last several weeks– the NYFCC honor is totally out of the blue.

Lee Chang-dong‘s Burning is mainly about an uneasy fraternal tension between Jong-su, a young, none-too-bright writer (Yoo Ah-in), and Ben (Steven Yeun), a rich, laid-back sociopath who drives a Porsche. Jong-su is intensely interested in Hae-mi (Jeon Jong-seo), a pretty 20something he vaguely knows from childhood, and yet she’s totally attached to Ben, who has much more of a comme ci comma ca attitude about women and in fact about everything.

The poster image is from a scene in which Hae-mi impulsively disrobes and does a primitive dance in front of Ben and Jong-su. It’s interesting that the designer decided to focus on this one moment, which doesn’t feel like anyone’s idea of an “important” scene while it’s happening. And yet the silhouetted image sinks in. 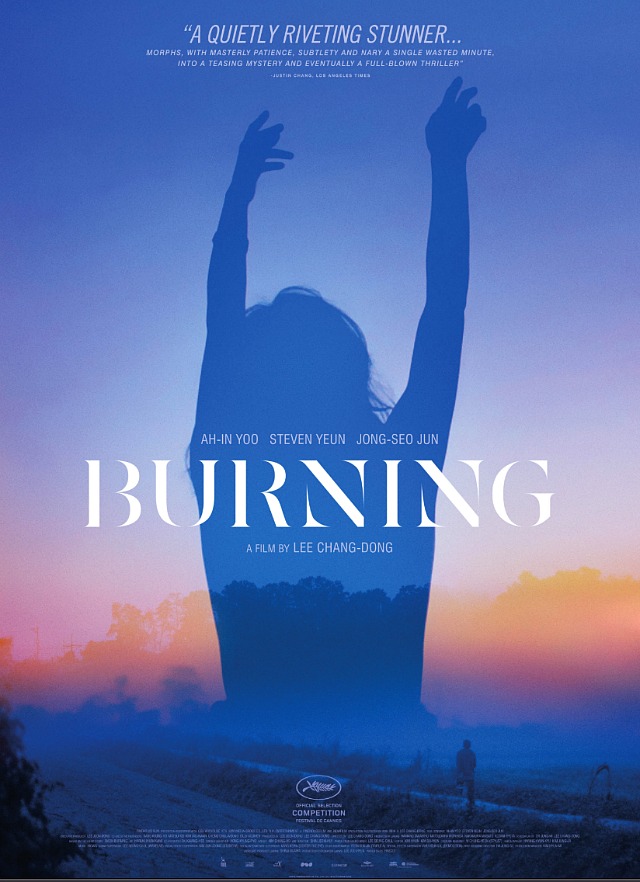 This is supposed to be a Mars sunset, but where’s the amber-orange tint? Why does it look so gray and ashy-smoggy? This could have been snapped on the 60 going out to Palm Springs, or taken from a camping site in Twenty-Nine Palms or in the middle of Utah’s Wasatch Mountains on the way up to Park City. 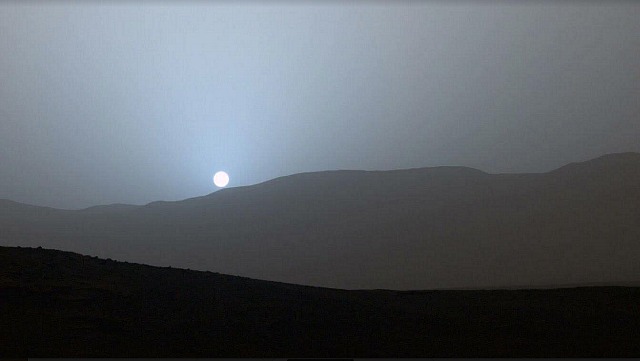 Trump repeatedly says Cohen is lying, but then adds: "Even if he was right, it doesn’t matter because I was allowed to do whatever I wanted during the campaign."pic.twitter.com/xncmtKKFmH

22 Comments
Summaries Can Be Cruel

Imagine all the magical feeling, insight, intuition and imagination that surely flowed through the nimble mind of screenwriter Gloria Katz, who passed four days ago from ovarian cancer. There’s always so much more to a person’s life than their so-called career highlights, obviously, but this, fairly or unfairly, is what obituaries always come down to.

And the hard fact is that Katz and her creative collaborator husband Willard Huyck are best known for their fruitful association with George Lucas and more precisely two major hits (one uncredited) during the early to mid ’70s, and for one huge stinker that happened in the mid ’80s.

Huyck and Katz’s greatest credited success was American Graffiti (’73), Lucas’s semi-autobiographical, night-on-the-town adventure film set in 1962 Modesto, California. Graffiti‘s success led to a long association between the couple and Lucas, which peaked (in a financial sense at least) when Katz and Huyck worked as uncredited script doctors on Star Wars (’77). They also co-wrote Steven Spielberg‘s Indiana Jones and the Temple of Doom (’84). They also teamed on the duddish Best Defense (co-writing screenplay, Huyck directing, Katz producing).

And then disaster struck.

Howard the Duck (’86), shadow-produced by Lucas, directed by Huyck, produced by Katz and based on their co-written script, not only failed commercially but became known as one of the biggest stink-bombs in Hollywood history. Huyck and Katz’s reps never really recovered. Katz wrote a 1989 TV film, Mothers, Daughters and Lovers, and then she and her husband co-wrote one more feature film, the Lucas-produced Radioland Murders (’94). And that was it. Smothered by tainted duck feathers. But at least they had that glorious ’70s streak to look back upon.

Remember the good old days when the New York Film Critics Circle’s website had a live-blog that would tap out the winners as they were decided upon? Now everyone just follows the blow-by-blow on Twitter or via Gold Derby. Voting is underway as we speak. 11:55 am: Things have stalled with ony three awards decided upon. Let’s get this show on the road, guys…hubbah-hubbah! 12:50 pm: All is forgiven with First Reformed‘s Ethan Hawke having taken the Best Actor prize, Paul Schrader winning the Best Screenplay trophy, and Can You Ever Forgive Me‘s Richard E. Grant having won for Best Supporting Actor. Not to mention Alfonso Cuaron‘s Roma cinematography having also triumphed.

Best Actor: First Reformed‘s Ethan Hawke. HE response: Yes! I had Hawke on my Gold Derby Best Actor roster from the get-go while the go-alongers (i.e., the vast majority) ignored him. Why? Because First Reformed opened last May and was therefore not on their Oscar radar. Do you understand how completely embarassing this kind of thinking is?

Best Actress: Regina Hall, Support The Girls. HE response: I never saw it.

Best Supporting Actress: Regina King, If Beale Street Could Talk. HE response: I don’t get it — King delivers a standard “mother courage” performance — but whatever. I would have voted for Amy Adams‘s Lynne Cheney performance in Vice.

Best Supporting Actor: Richard E. Grant, Can You Ever Forgive Me?. HE response: All hail the glorious cat killer!

Best Screenplay: First Reformed, Paul Schrader. HE response: 100% agreement and then some.

Best Cinematography: Roma (Alfonso Cuaron). HE response: There was no other choice except for Łukasz Żal‘s lensing of Cold War. Hearty congrats to Cuaron.

Best Animated Film: Spider-Man: Into the Spider-Verse. HE response: I don’t care how good it supposedly is. I don’t do animated, especially anything to do with superheroes.