The thing about Sunset Boulevard that doesn’t quite play in today’s terms is Joe Gillis‘s refusal to confide to Betty Schaefer what he’s up to — that he’s become a kind of screenwriting gigolo, living high on the hog with a 50 year-old silent movie star. Gillis cares for Schaefer and vice versa — audiences can tell they’d be a good match — but he’s too consumed with self-loathing to let her know what’s up. That doesn’t figure. He was broke and ready to skip town when he met Norma Desmond. Now he’s hustling a rich meal-ticket while he plots his next move. What’s so shameful about that?

The first 30 minutes of Sunset Boulevard are sharp and catchy, and the last 15 are grand-slammy. But the middle 65 of this 110-minute film are a little slow and frustrating.

And why hasn’t Gillis insisted to Desmond that he has to be paid an actual weekly salary? If he got one he could save up enough to buy a new car and move back into his apartment and get his career going again, especially with Schaefer as his new writing partner.

Cameron Crowe: “There is a famous story from the first Hollywood screening of Sunset Boulevard [in 1950]. Louis B. Mayer [head of MGM] was standing on a stairway, railing about ‘How dare this young man, Wilder, bite the hand that feeds him?’ What did you say to him when you overheard all this?”

Billy Wilder: “I am Mr. Wilder, and go fuck yourself.”

Crowe: “What did he say to that?

Wilder: “He was astonished. He was standing with the great MGM bosses who were below him, there at the studio, Mr. [Eddie] Mannix and Mr. [Joe] Cohen. And that so astonished them, that somebody had the guts to say, “Why don’t you go and fuck yourself?” [And that’s when] I knew that I had a good picture there. — from October 1999 Vanity Fair piece, “Conversations With Billy.”

Right now is Best Picture crunch time. Opinions are hardening. People are now looking to be talked out of already-decided-upon favorites. What am I missing right now? In what ways if at all is my list incorrect? What do I need to move up or down?

For many, many weeks ESPN’s Adnan Virk and I were the only Gold Derby-ites to predict Ethan Hawke as a Best Actor finalist. Then he won the Best Actor trophy from the Gotham Awards and the New York Film Critics Circle. As of right now 21 out of 30 Gold Derby spitballers have included Hawke on their top-five contender lists. That’s quite an uptick. They wouldn’t get behind him on the merits of his First Reformed performance — sticking their necks out would have made them feel unsafe. They finally took the plunge when the Gothams and the NYFCC insisted that Hawke has heat. The other four are still Bradley Cooper (A Star Is Born), Viggo Mortensen (Green Book), Christian Bale (Vice) and Rami Malek (Bohemian Rhapsody). 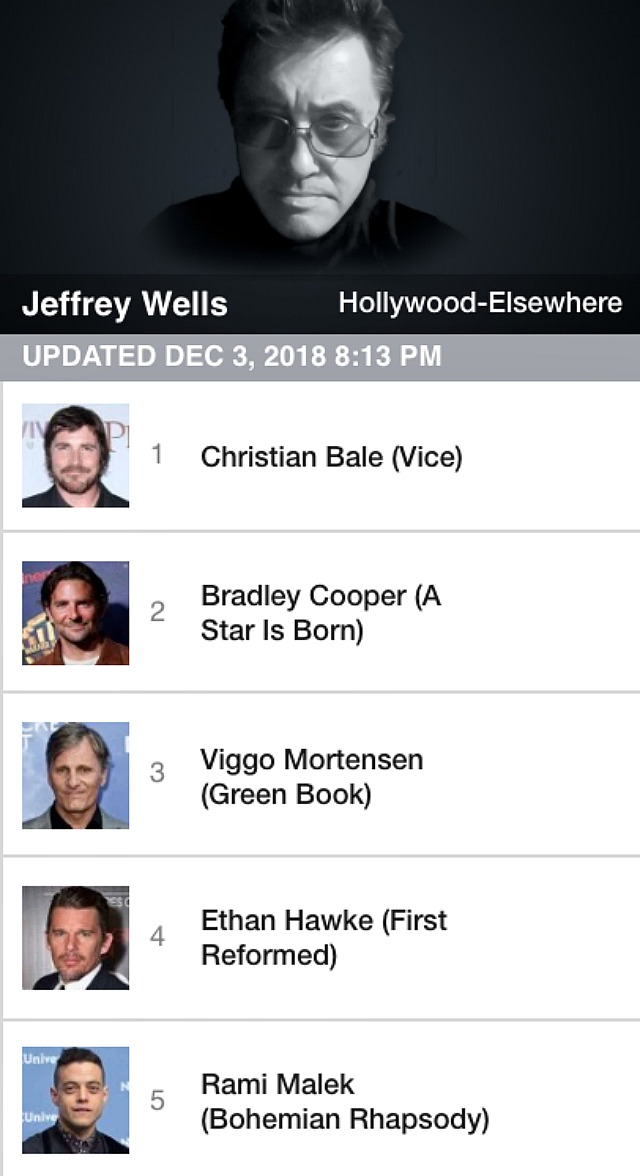 It says something for Ethan Hawke‘s charisma that I didn’t even blink when he appeared in a pair of flip-flops in Juliet Naked. Normally that would prompt am agonizing reappraisal, at least in my realm. The only other moment in which mandals weren’t an HE issue was when Spike Jonze donned a pair for that Moneyball scene that he shared with Brad Pitt and Robin Wright. That was because I knew they were being worn with a wink — because director Bennett Miller was saying to audiences (and to guys like me in particular) that “it’s okay if you don’t like Jonze’s character that much…given his footwear I wouldn’t blame you…you get what I’m saying, right?”

I honestly believe that the bad mandal karma has gotten around or you’d see actors wearing them a lot more. I can think of only four instances apart from Hawke and Jonze. Michael Fassbender wearing a pair in Prometheus — a moment that was probably pivotal in my forming a negative opinion of the guy. Billy Baldwin strolling around in bathroom flip-flops in Backdraft — if only Ron Howard had taken him aside and said “I don’t think they work.” Adam Sandler in 20 First Dates. And Colin Farrell wearing sandals during a kitchen chat scene in Miami Vice.

It’s not just mandals but footwear in general. Directors almost never allow an audience to consider whatever kind of shoe, boot or sandal…none of that. Even in the matter of really slick-looking shoes, like those polished lace-up cordovans Cary Grant wears in North by Northwest. 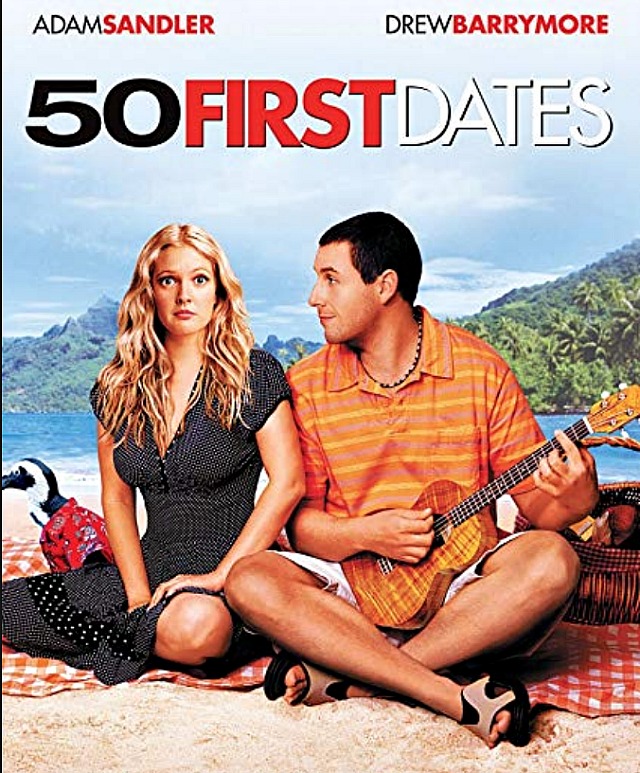 “On the evening of 12.8.80, Roone Arledge was presiding over ABC’s Monday Night Football in his capacity as its executive producer. When Arledge received word of John Lennon‘s death, a game between the New England Patriots and the Miami Dolphins was tied with less than a minute left in the fourth quarter and the Patriots were driving toward the potential winning score. As the Patriots tried to put themselves in position for a field goal, Arledge informed Frank Gifford and Howard Cosell of the shooting and said they be the ones to report on the murder.

“Cosell was apprehensive at first, as he felt the game should take precedence and that it was not their place to break such a big story. Gifford convinced Cosell otherwise, saying that he should not ‘hang on to (the news)’ as the significance of the event was much greater than the finish of the game. The following exchange begins with thirty seconds left in the fourth quarter, shortly after Gifford and Cosell were informed.” — from “Murder of John Lennon” Wiki page.

Eight or nine days ago I promised to stream Andrew Bujalski‘s Support the Girls and assess the merit of the New York Film Critics Circle giving Regina Hall their Best Actress trophy. Which some regarded as a curious call. For whatever fudgeball reasons I didn’t get to it last weekend, and then the neck surgery happened last Tuesday and I’ve basically been Kharis for four days now.

But last night I finally hit play, and I have to say that Support The Girls isn’t half bad, and that I get what Indiewire‘s Eric Kohn and David Ehrlich were on about when they posted raves during last March’s SXSW festival or when it opened last August. And I get why they pushed and politicked on Hall’s behalf during the NYFCC voting. Their enthusiasm wasn’t unwarranted, and I think I understand why they preferred giving the award to Hall rather than Can You Ever Forgive Me‘s Melissa McCarthy or The Wife‘s Glenn Close or Widows‘ Viola Davis. So yes, I respect their motives, but I’m still persuaded that McCarthy’s is far and away the finest in her field. Hall is obviously skilled and entirely commendable in Support The Girls, but McCarthy is like “whoa, hold on, stand back, look at this.”

Support The Girls is a believable, better than decent, woe-is-me, carry-that-weight, handle-that-shit, “One Day In The life of Ivan Denisovich” mumblecore no-laugh “comedy” about poor Lisa (Hall), the manager of an Austin Hooters-like bar (i.e., Double Whammies) who has to be “the adult in the room” as she copes with all kinds of employee problems and personal hassles and you-name-it. The trailer tells you that right off the bat.

You’re not supposed to laugh or even chuckle with Lisa as much as feel for her situation and identify with her burden, and I sure as hell did that. I admired her strength, persistence, maturity and people skills as she fused just the right combination of steel, patience and restraint. Hall is a good actress — she knew exactly how to make this character feel genuine and whole. I spent the whole time pulling for Lisa, wanting to see her come through, telepathically urging her adversaries to go easy, etc. Your heart goes out.

God help the poor souls of suburban Austin and in fact all denizens of blighted urban sprawls who live or work within spitting distance of freeways…God help them all. Life can feel so miserable and deflating under the wrong cultural conditions or circumstances and especially in the company of people with ongoing issues, but here’s to the Lisas of the world…they keep things running and humming despite all kinds of sadness and frustration and the heaviest of hearts.