I’ve been a Bruce Springsteen fan for the last 40-odd years, like everyone else. But I never saw him live, not once. The ticket situation always seemed so damn competitive and pricey. I forget how many months ago a Los Angeles attorney friend paid God knows how many hundreds of dollars to catch his one-man Broadway show; even if I could have afforded that I wouldn’t have felt very good about it. There are limits to the value of watching someone perform.

But last night I watched the Springsteen on Broadway show on Netflix, and it got me. But good. I was seriously impressed by the depth of the writing and the caressing emotions I felt as this 69 year-old guy recalled his New Jersey-based life — the childhood, the conflicts, the rock ‘n’ roll salvation. It was like being with a good friend or something, and listening to him unload.

I’m not a passionate “New Jersey guy” the way Springsteen is, but it felt to me like great heart-touching poetry. For the first time in my life I felt myself melting as I listened to this and that song. The New Jersey I knew as a kid and a teenager was horrific in some ways — I was actually delighted to move to Connecticut, once I got to know it — but for some reason I was feeling the old pangs anyway. That’s Bruce for you — his stuff reaches out and takes hold.

It’s a journey, this show…a ride and a walk into the past, and a sad, shared appreciation of a whole lot of things about American life, about the after-taste of the ’50s, ’60s and ’70s and how much of the home-grown fibre has been tainted or swallowed by corporatism or narcotized by opioids over the last 35 or 40 years.

I somehow didn’t realize that Bruce’s between-song patter would be so skillfully written and performed just so. It’s his story and his heart and everything he’s seen and been through, but he’s sharing it as a “performance.” He’s acting but at the same just being.

I don’t know at what precise point the show began to get to me, but I it might have been during his low-key delivery of “My Hometown.” Also “Tenth Avenue Freeze Out”, “The Rising,” “Dancing in the Dark”…hell, all of it.

Clint Eastwood is pushing 89 but still has a nice clean jawline. I don’t meant to sound obsessive, but Joe “turkey wattle” Biden, 76, needs to “Clint up” before he announces his Presidential candidacy sometime next year. Joe knows what to do. He’s been no stranger to this and procedure over the years. He was a hair-plug pioneer way back in the late ’80s or thereabouts, and it probably helped him a lot. 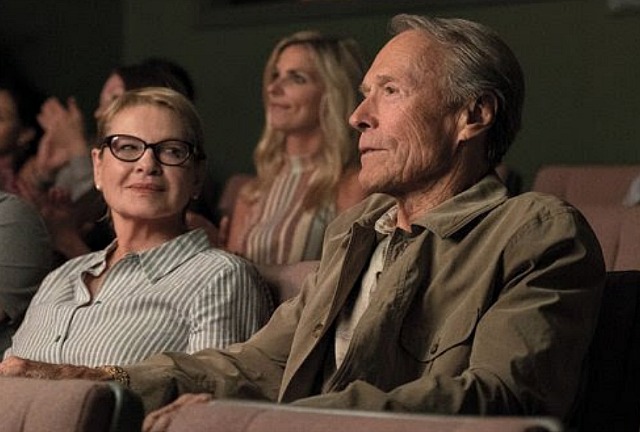 Killer Farber Quote #1: “Ashes In The Snow is a bit too somber and unrelentingly bleak to draw much of an audience beyond the festival circuit, but it does showcase a number of talented actors and filmmakers.”

Killer Farber Quote #2: “The film is heartfelt and often powerful, but sometimes too sluggish to carry maximum impact.”

Killer Farber Quote #3: “Ashes In The Snow [is] punishing rather than dramatically gripping. There is not enough variety in the scenes of torment to keep us fully engaged, and the pacing sometimes flags. It is admittedly a challenge to execute this kind of story of brutalization without leaving the audience feeling somewhat brutalized as well. The history is very much worth retelling, but the film might have benefited from a touch of poetry along with the misery.”

Imagine the feelings of absolute devastation if the All-Powerful Movie Godz of the Apoocalypse were to suddenly appear on the highest Hollywood mountaintop and proclaim “for the next five years creative content providers are hereby forbidden to work in horror, zombie, comic-book and and superhero genres.”

Tens of thousands would be stranded, panic-stricken, without a paddle…unable to earn a paycheck. The result would be for all practical purposes an industry-wide Armageddon.

I’ve no problem watching a film on the Macbook Pro with earphones, but every so often I’ll “mirror” a film so I can see it on the Sony SONY XBR-65X930C, which I bought in April 2016. I use a “Mirror for Samsung TV” app, which has worked pretty well. Because I use a Samsung 4K Bluray player as the principal mirroring device.

Except last night, just as I was firing up the app for another mirroring, the sound quit on me. The problem didn’t originate with any of the hooked-up devices (Roku player, Samsung 4K Bluray, Oppo Bluray, cable TV) — something just shut off within the TV itself. Bing! Thank you, Sony, and thanks also to God the Father Almighty, maker of heaven and earth and all living things.

So I spent an hour or so trying the usual remedies…nothing. I tried reading the basic manual, I went into chat rooms, this and that.

Then I called three or four Sony tech support numbers, only one of which offered a human being — a carefully mannered fellow who spoke with what sounded to me like a kind of speech impediment. (He had trouble with certain vowels.) The first thing out of his mouth was “we don’t assist people with TVs manufactured in 2015,” which translates as “if you want our help your TV has to be newer.” I said I fully realize that I’m an unworthy, low-rent customer for owning a TV made three years ago and therefore out of warranty, but that I’d be glad to pay for his technical assistance. He tried to fob me off with an offer of emailed instructions, but I asked him to please show a little basic humanity and help over the phone.

What I didn’t want to hear from this guy was “go to settings and do a basic factory reset.” Because with the slow-as-molasses software downloads and installations and my having to input all the device passwords this effort would consume at least a couple of hours of my time. But that’s what he said.

I initiated a hard factory reset an hour ago. The software downloading process is taking forever, and there’s all the username and password loading for the connected devices yet to come. Update: Everything is up and working again, but I doubt if I’m going to “mirror” anything again. Not. at least, with that “Mirror for Samsung TV” app.

“Who Cares?” is a track off Paul McCartney‘s Egypt Station album, which popped on 9.7.18. The basic message of Brantley Gutierrez and Ryan Heffington‘s “Who Cares?” video (shot on 65mm film) is that bullying really sucks. But most of us understand that.

The dialogue exchange at the beginning is the most interesting part. McCartney, playing a graying, gentle-mannered hypnotist called “Dr. Lorenz” (no first name?), asks a frazzled-looking Emma Stone about her emotions of the moment. She answers yes to all the antsy negatives. Then Dr. Lorenz mentions the power of suggestion. He turns on his early 20th Century swirling hypnosis device and suddenly we’re swimming in an animated, candy-coated Ken Russell fantasy video, straight out of The Boy Friend or Tommy.

Stone is totally unrecognizable in her flaming-orange-hair kabuki makeup. McCartney needs to dial back on the large shocks of silver hair — he needs to go back to little sprigs of gray around his ears and side temples, but no gray on top. If he insists on showing his age I would suggest that he go with dyed dark-gray hair mixed with silvery-white sprigs. Sounds weird, I know, but it works for some.