“Nicole Kidman is indeed remarkable [in Destroyer], as rumor suggests, but mainly because you can’t stop remarking her. It’s an over-cover performance in an undercover role. Though aiming to blend in, she’s so dramatically busy that she ends up sticking out, like a chameleon who’s praying for an Oscar nod.

“The rule seems to be that the more makeup and prosthetics she piles on the more likely we are to cry out, in unison, ‘Oh, look, it’s Nicole Kidman!'” — from Anthony Lane’s review in the 1.17.19 issue of The New Yorker.

From “Pains of Hell,” my 9.1.18 Telluride review: “Destroyer is mostly about the way Kidman looks, like a combination vampire-zombie with dark eye bags and a complexion that suggests a heroin habit mixed with twice-daily injections of embalming fluid. Plus a Desolation Row, gray-streaked hair style. It’s also about the whispery way in which she speaks. I swear to God I missed over half of her dialogue.

“Kidman and Kusama are basically saying to us, ‘Have you guys ever seen such a badass, hardass undercover female cop in your moviegoing life? Even in a zombie movie?’ HE answer: No, I’ve never seen a cop character who looks this wasted, this dead-to-the-world, this gutted, this excavated, this George Romero, this Bela Lugosi-ish. Hats off.”

This morning the Producers Guild of America revealed 10 nominees for their Best Picture prize (i.e., Daryl F. Zanuck award). The elite arbiters are freaking about the mildly mediocre but well-liked Bohemian Rhapsody being among them. For me the more appalling nominee is Crazy Rich Asians, which was included because of the all-Asian cast and the fact that it made boatloads of money. The other nominees are Black Panther, BlacKkKlansman, The Favourite, Green Book, A Quiet Place (another outlier), Roma, A Star is Born and Vice. 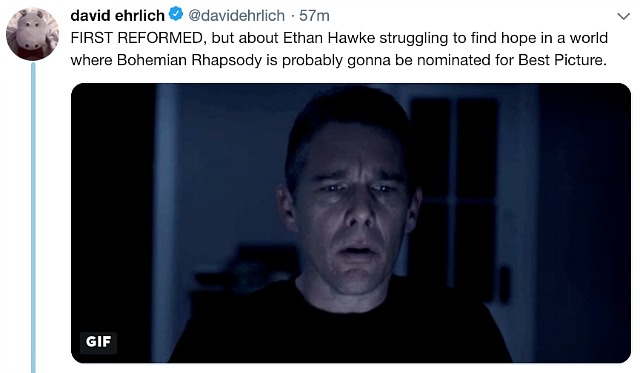 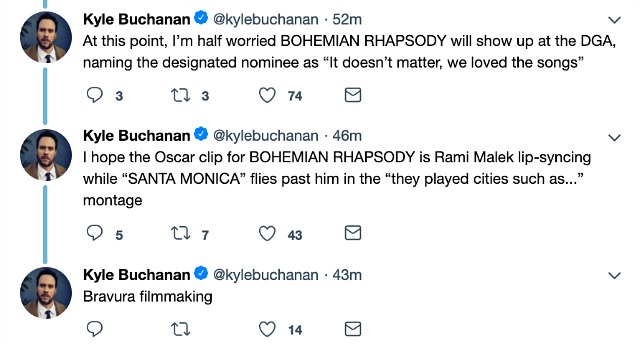 If you wanted to be snide about it, which of the favored Best Picture contenders could be regarded as a kind of soap opera? A Star Is Born, The Favourite or If Beale Street Could Talk…right? So which is being referred to in this tweet? 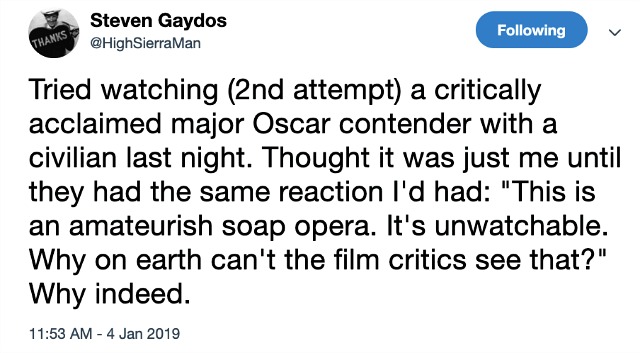 2:40 pm Update: Variety‘s Matt Donnelly is reporting that “key parties involved in the annual Oscars telecast are open to the return of Kevin Hart as host, following an alternately contrite and defiant appearance on The Ellen Show on Thursday.”

Earth to Academy honchos: Did you guys read what Hart told Kris Tapley only hours before chatting with Ellen?

Sir Thomas More to Kevin Hart: “When you spoke to Tapley you said you wouldn’t host the Oscars…’it’s done, it’s done.’ Hours later you told Ellen you might want the gig after all. We must just pray that when your head’s finished turning, your face is to the front again.” 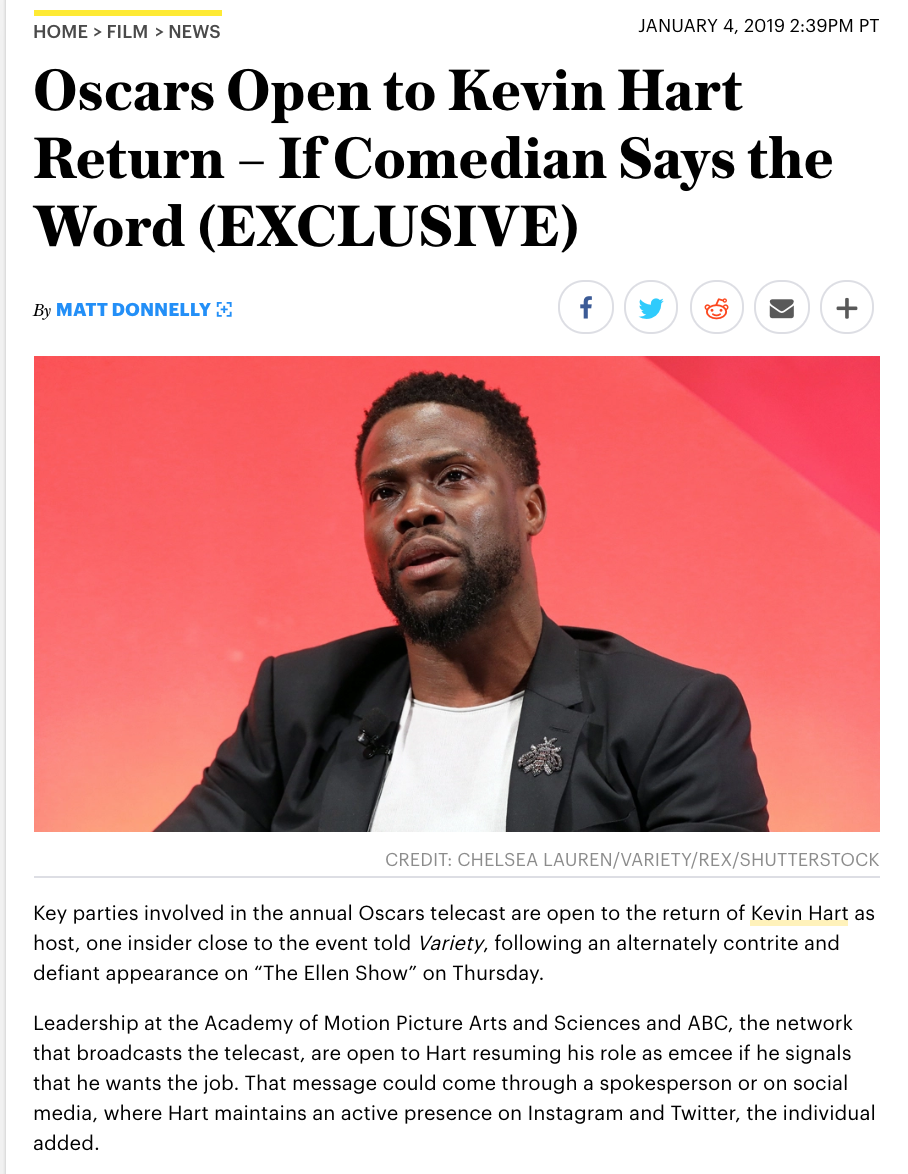 Previously: Hours before visiting with Ellen DeGeneres and suggesting to viewers that he’s re-assessing the Oscar hosting gig, Kevin Hart firmly told Variety‘s Kris Tapley that he would not host the Oscars…no way, no how, nopeski.

Hart #1: “Would I ever do it? No, it’s done. It’s done. The moment came and it was a blessing and I was excited at the opportunity and I still am.”

Hart #2: “In my mind I got the job, it was a dream job, and things came up that simply prohibited it from happening. But I don’t believe in going backwards. When I go on that stage, it will be because I’ve somehow figured out a way to win the Oscar. Somehow I’ll get to the stage but it’s not going to be in this way because it just comes with such a weird cloud at this point.”

So now there are two arguments about Hart filling the presumably-still-open Oscar gig. One, the LGBTQs have doubled-down on him for not really apologizing for those old ugly tweets and for generally being a bad fit in 2019. And two, he’s all kinds of shifty and dodgy about what he really wants, telling Ellen one thing and Kris another.

Throughout most of Cold War, which spans about 14 or 15 years (1949 to the early-mid ’60s), Tomasz Kot‘s piano-man character wears hipster whiskers. Nobody and I mean nobody adopted this look until the debut of grubby-chic manbeards in the mid to late ’80s (GQ, Don Johnson, Miami Vice). Anyone who wore three-week-growth whiskers before that late-Reagan era was universally regarded as an alcoholic bum, a hobo, a down-at-the-heels loser.

“War” is one thing and political conflict another, but there’s a certain amount of overlap. The slight irony is that Alexandria Ocasio-Cortez is probably more dug into the idea of pitched-battle politics than any of the new generation of Congressional legislators. To her credit, of course, but she’s certainly not averse to using social-media grenade launchers and other tools of political warfare. Fight, fight, fight, fight, fight, fight, fight.

I hear the GOP thinks women dancing are scandalous.

Wait till they find out Congresswomen dance too! 💃🏽

Have a great weekend everyone 🙂 pic.twitter.com/9y6ALOw4F6

Is this an even worse Kevin Hart debacle than the first one? I kinda doubt that the LGBTQ community is going to follow Ellen Degeneres‘ lead by saying ‘okay, Kevin…we forgive your homophobic tweets, host the show, all is well,” etc. Or am I misreading the situation?

Sopan Deb‘s N.Y. Times report contains the following Ellen quote: “So I called [the Academy]. I said ‘Kevin’s on.’ I said, ‘I have no idea if he wants to come back and host. But what are your thoughts?’ And they were like, ‘Oh my god. We want him to host. We feel like that maybe he misunderstood or it was handled wrong or maybe we said the wrong thing but we want him to host.’” 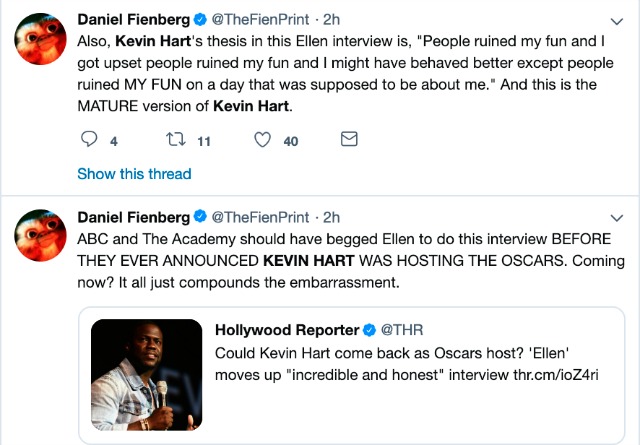