Legendary producer and studio chief Alan Ladd, Jr. has long been regarded as one of the good guys — a smart, well-respected industry fellow who had quite a run from the mid ’70s to early ’90s.

Ladd was the intrepid 20th Century Fox-based producer of George Lucas‘s Star Wars, promoting and guarding it during a notoriously dicey era when Fox execs feared it might be a clunker. A year or so later his regime also produced Ridley Scott‘s Alien.

A classy, conservatively dressed, soft-spoken guy who was never much for interviews or colorful quips, “Laddie” — the son of ’40s and ’50s superstar Alan Ladd — was widely respected by filmmakers. Like Warner Bros. honcho John Calley, Ladd brandished something that very few producers would dare to mention in 2019 — upmarket taste. He even occasionally found the balls to take creative risks on what he believed was first-rate material.

He was also the guy who didn’t seem to strongly believe in Blade Runner (he insisted that Harrison Ford record a narration track) and who released a truncated cut of Sergio Leone‘s Once Upon A Time in America for its initial release. (Leone’s director’s cut version is the one everyone thinks of today.) And Laddie had a terrible time as the head of MGM in the mid ’80s, when the company was owned by fraudster Giancarlo Parretti

The trailer for Amanda Ladd-Jones‘ Laddie: The Man Behind The Movies strongly suggests it’ll be a cottonball portrait — basically Laddie’s filmmaker pallies telling us what a shrewd, dependable and admirable guy he was, etc. Ladd-Jones is his daughter — the chances of her delivering even a hint of a warts-and-all approach are probably somewhere between slim and none.

I’m nonetheless interested in catching it at the American Cinematheque on Friday, 1.18. The AC’s website informs that the doc runs 184 minutes — almost certainly a typo. If this was the actual running time, I would be genuinely excited.

Not that Oscar contenders shouldn’t be taken to task (sharply reprimanded but not necessarily killed) if some form of ghastly conduct comes to light, but remember when widely–read opinion pieces were the talk of the town, and which sometimes helped determine the Oscar fate of this or that film or performance?

Like, for example, the late William Goldman‘s controversial hit piece about Martin Scorsese‘s Gangs of New York (“Crashing The Party for Poor Marty”), which ran in Variety on 2.2.03?

Did Goldman kill Gangs at the Oscars? Maybe to some extent, but Gangs mainly killed itself. Scorsese’s brutally violent historical epic was nominated for 10 Oscars, and won exactly none. Reason: Nobody really liked it. Four years later Scorsese’s The Departed won the Best Picture Oscar. Reason: People liked it.’

Green Book has been twittered to death, but where is the definitive William Goldman-esque takedown of A Star Is Born? Oh, how I wish Bill was still among us so he could bang it out. If he was still here and in good health, he’d almost certainly write about (a) the first drop-out moment (i.e., when he stopped believing in Bradley Cooper‘s film), and (b) how it’s probably not the greatest idea since the invention of sound to give the Best Picture Oscar to a remake of a remake of a remake of a remake — i.e., the fifth version of a showbiz saga that dates back 86 years.

Here’s the Goldman vs. Gangs piece:

“I don’t know about the rest of you, but I am sick unto death of feeling guilty about Martin Scorsese.

“Here are the names of five great directors: Charlie Chaplin, Howard Hawks, Alfred Hitchcock, Stanley Kubrick and Orson Welles. What do they have in common? For all their fame and brilliance, none has won the Oscar for best direction.

“Should the five have won? Absolutely. But it’s not a mortal sin they didn’t. Should Scorsese? You bet. A couple of times. Taxi Driver, obviously. Raging Bull, obviously. But I fell in love with his talent earlier on, with Alice Doesn’t Live Here Anymore.

“This year, more than ever, it’s like there’s a Byzantine plot to get Scorsese the honor. As if the phonier critics all dropped to their knees and looked up at the Hollywood Gods, going in unison, ‘Oh pwease, we twied so hard wif Kundun, we even twied wif Bwing Out the Dead, so pwease pwease wet Marty win this year, he wants it sooooo bad.”

“That he does. The Hollywood parties he is attending must make him want to barf, but there is, glad-handing anyone in the vicinity who is an Academy member who might throw him a vote.

“Miramax, the greatest movie company of the era (and the most brutal — and maybe they have to go together) is so all-out for Scorsese it’s heart-stopping. They do a brilliant job and I honor that — but I will never forgive them for hyping the Oscar to Roberto Benigni, the scummiest award in the Academy’s history. And I suspect Scorsese will win too.

“But he sure doesn’t deserve it, not this year. Because Gangs of New York is a mess.

I’m delighted with our West Hollywood abode — two cats, great location, hardwood floors, nicely furnished, low rent — but there’s this guy upstairs with a loud voice. He’s one of those friendly smoothie types, and totally in love with his own honky voicebox — actually a combination of a foghorn and a French horn.

The problem is that he bellows in a mild sort of way — his voice volume is always set to at least eight — with occasional high-pitched giggles and tee-hees. Always on the phone, always chuckling and smooth-talking his pallies and always extra-double audible.

My guess is that deep down this guy is some kind of frustrated talk-show host or March of Dimes charity emcee, but I’m telling you that listening to that honking voice for hours on end is awful.

Most people who’ve been decently raised and acquired a little cultivation understand by the time they’re ten or twelve that there are three voice levels in polite society — (a) intimate (low), (b) conversational (medium) and (c) addressing people in a Madrid bullfight stadium without a microphone (the guy upstairs).

Foghorn Leghorn doesn’t know, doesn’t care, can’t be bothered…he just adores that wonderfully lulling sound, that calming vocal-chord vibration, that feeling of being the ostensible “charmer” with the smoothly braying donkey voice. On top of which he has heavy feet — he’s always clomping around, which is another indication of a lack of couth.

Needless to add this guy represents a common plague of the modern age — loud, coarse people who are more or less indifferent to the fact that they might be aurally torturing (or at least afflicting) others nearby. Guys like this are all over. A couple of summers ago I was sitting with Tatyana at an outdoor table at Cafe Camille, and we were rolling our eyes about the sound of four or five Ugly Americans a couple of tables away who couldn’t (wouldn’t) keep their voices down. I got into trouble when I complained about this syndrome in 2010 — my mistake was mentioning that the ethnicity of the bellowers.

Over the last year or so I’ve noted certain apparent similarities between Tatyana Antropova and Vladimir Putin, and I mean that as a compliment. A brilliant organizer-manager (at which she excelled during her peak professional years in Russia), Tatyana is nothing if not bright and shrewd and skilled at divining the ins and outs of the fluctuating American zeitgeist. Commercially, culturally or spiritually, she’s constantly separating the wheat from the chaff — sniffing, exploring, comparing, assessing.

Tatyana is on Twitter, of course, and a fervent Instagram and Facebook player, of course, and while driving around she’s a total WAZE hound (and can’t speak poorly enough of Google Maps). If she was a professional gambler she’d be the Russian Amarillo Slim. Plus she hates the noisy guy upstairs as much as I do, and has excellent taste in clothing and interior design, and over the last couple of years has blended into Los Angeles culture as well as can be expected, and probably better than most other Russian expats.

Tatyana’s command of English is 90% to 95% “there”, and to her credit she’s always asking about this or that noun or verb or slang expression. (She’s obviously way ahead of me in terms of being bilingual and understanding the gist of many European tongues.) But one thing she hasn’t mastered, English-wise, is modifying her strong Russian accent. Which I, selfish to the last, find delightful.

Tatyana is a go-getter, as noted, but her first stabs at pronouncing this and that are sometimes fascinating and always, for me, heartwarming. I love her mispronunciations, and how it sometimes takes two or three minutes of question-and-answer discussions to get to the bottom of things. If I was a better partner I’d be a tougher taskmaster, but I can’t help but be charmed.

The other day it was about “Hahnray BOHNduhl.” I eventually discerned that she was talking about Henri Bendel, the financially struggling women’s accessory chain. The correct pronunciation is “AhnREE BenDELL.” I guarantee that most under-40 American female customers mispronounce it also — 90% of them probably say “Henry BENdul.” The difference between Tatyana and American women is that she’s always correcting herself, always sharpening her game. Most younger American women? Maybe not so much. Because they have nothing to prove.

Tatyana and I attended a special gathering Friday night for Cold War director Pawel Palikowski and star Joanna Kulig. The elegant affair happened at the Brentwood home of producer and hostess supreme Colleen Camp. A sea of faces both familiar and distinguished — Alexander Payne, Michael Mann, Phillip Noyce, Helen Hunt, Dustin Hoffman, David O. Russell, Robert Towne, screenwriter Michael Tolkin, producers Art Linson and Albert Berger. It was great speaking with Kulig (due to give birth to a son in early February) and her husband, documentarian Maciek Bochniak. The evening ended with Kulig singing three songs, accompanied by a skilled, low-key pianist and a stand-up bassist. (I regret that the videos I took were unsteady and poorly angled.) Awesome buffet, desserts to die for. A special thanks to Camp for her gracious hospitality. 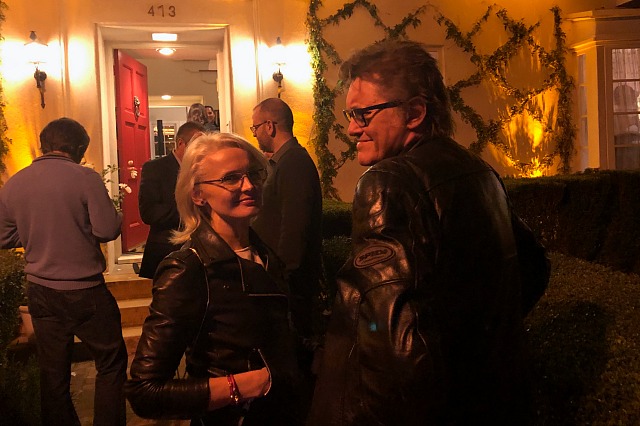 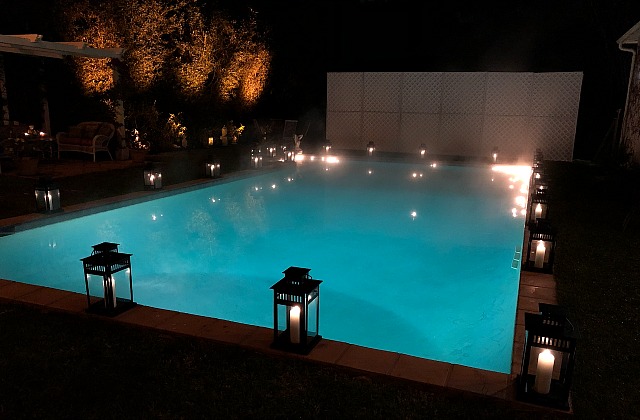