Earlier today I was flipping through an elegant, rather pricey ($175) coffee-table book on Alfonso Cuaron‘s Roma. Obviously an award-season deal but a class act. Published by Assouline, 172 pages, 165 illustrations, a Cuaron essay, etc. I gradually came upon an acknowledgment at the very end, which is that HE’s own Roger Durling (exec director of the just-concluded Santa Barbara Film Festival) co-handled the design and editorial duties with Claudia Lizale. Roger is quite modest, but I gather he was more or less in charge. Flew down to Mexico City to see Roma last July, etc. He and Lizale began the work not long after. An excellent job, one of the very best, Taschen-level. 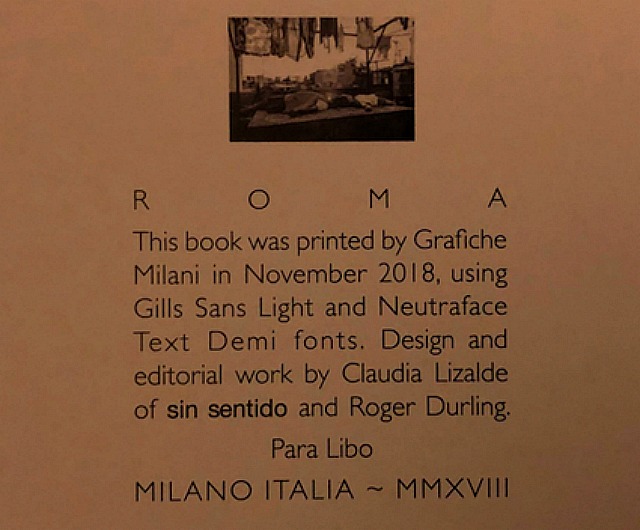 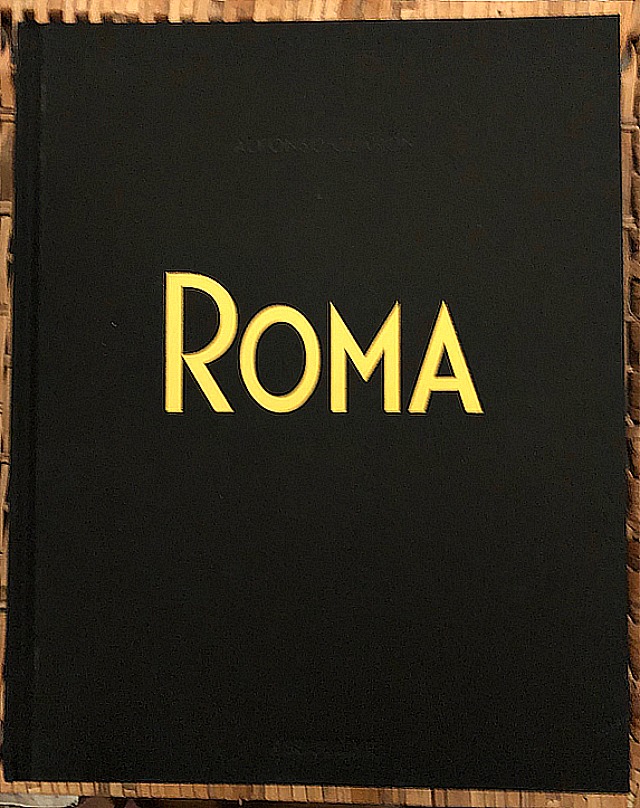 Earlier today a New Orleans-based friend of a friend wrote a tribute to Albert Finney on his Facebook page.  About the time he worked alongside Finney on the set of Miller’s Crossing, which shot in the Nyawlins area:

“Finney’s role of Leo in Miller’s Crossing was originally written for Trey Wilson, who played Nathan Arizona in Raising Arizona. Trey died days before shooting. Finney stepped in on a few days notice and was incredible in the role.

“Finney went right to the production office when he got to town and announced loudly to all, ‘My name is Albert Finney but you can call me whatever the hell you want!’ He then kissed all the women and charmed all the men.

“Finney chose a teamster as his driver, a guy whose father worked at the racetrack. He had the driver take him to the track every day, spending lots of time [there].

“Albert had a table waiting at every Marva Wright show. More then once I saw Marva stop a show and tell folks to ‘make way for Mr. Albert.’

“There was a cigar store back then on Royal, just off Canal Street. The woman who worked the counter was older and British. Albert would stop in to buy cigars and the woman, noticing his British accent, became friendly with him.

“One day as he was leaving she said, ‘Has anyone ever told you you look a bit like Albert Finney?’ He replied, ‘Do you think so?’ She answered, “Yes, but I’m afraid he’s a bit more handsome than you.” Finney walked out laughing.

“Finney was everything I ever thought a movie star would be, and getting to observe him on stage and off remains one of the joys in my life.”

“In my next life I want to live my life backwards. You start out dead and get that out of the way. Then you wake up in an old people’s home feeling better every day. You get kicked out for being too healthy, go collect your pension, and then when you start work. You get a gold watch and a party on your first day. You work for 40 years until you’re young enough to enjoy your retirement. You party, drink alcohol, and are generally promiscuous, then you are ready for high school.

“You then go to primary school, you become a kid, you play. You have no responsibilities, you become a baby until you are born. And then you spend your last 9 months floating in luxurious spa-like conditions with central heating and room service on tap, larger quarters every day and then Voila! You finish off as an orgasm!” — Woody Allen.

Certain parties complained about Allen’s joshing speech at a 2017 AFI tribute for Diane Keaton. But it’s a funny speech. Especially the Newport Beach joke; ditto bulimia + Pizza Hut. And: “Death is like a colonoscopy — the problem is that life is like the prep day.”

Roughly 40 years ago Sir Laurence Olivier was presented with an honorary Oscar. This YouTube capture lasts six minutes and 25 seconds — 130 seconds for Cary Grant to introduce Olivier, 80 seconds of standing ovation, and two minutes and 45 seconds for Olivier’s eloquent acceptance speech (i.e., “the prodigal, pure human kindness of [this tribute] must be seen as a beautiful star in that firmament”). And that’s not counting the film-clip reel, which probably lasted a good 90 seconds if not longer. So figure 7 minutes, 55 seconds — call it eight minutes.

This was one of the great emotional-surge moments in Oscar history. (Consider Jon Voight‘s reaction after Oliver concludes.) And this is what people watch the Oscars for — for some great articulation, some damburst of feeling, some out-of-the-blue surprise or upset or even a big mistake. The 2017 La La land / Moonlight screw-up was actually great TV…really!

As I understand it, the ABC commissars want this year’s host-free Oscar telecast to unfold as fast as possible, and that means eliminating or reducing Larry Oliver moments and cutting down on acceptance speeches and suppressing emotional outbursts and basically cutting all the impromptu stuff.

And — this is significant — handing out the Best Cinematography Oscar off-screen. Movies are an overwhelmingly visual medium, and they want to hand out the Best Cinematography Oscar during a commercial? The people who love movies and the joy and glory of legendary Oscar telecasts and the whole messy fun of it need to rise up and tell the ABC commissars to leave the room and let the Oscar show breathe and be itself, and basically let the love and humanity back in.

Deadline‘s Pete Hammond is picking Green Book to win the Best Picture Oscar for the same reason that everyone else is buying into this scenario — Green Book is a very strong preferential ballot contender whereas Roma is either a #1 pick or an end-of-the-lister.

Oh, and by the way: BlacKkKlansman‘s Spike Lee will be the recipient of a career-tribute “gimmee” by way of a Best Adapted Screenplay Oscar (which he’ll share with Charlie Wachtel, David Rabinowitz and Kevin Willmott). Sorry, but that’s the best he can hope for.

I’ve had this mint-condition, foam-mounted Sexy Beast poster for nearly 20 years now. I snagged a copy during the 1999 Toronto Film Festival. The “devil Ben Kingsley” ad concept was abandoned when Fox Searchlight acquired it for distribution, so it’s a relative rarity. But I’ve always found it too extreme to hang on my living room wall, and Tatyana has told me to throw it out. So it’s going to waste in a dark closet.

I’m figuring someone out there might want to own it and display it proudly. After 20 years I’m figuring it’s worth at least $250. No negotiations — take it or leave it. 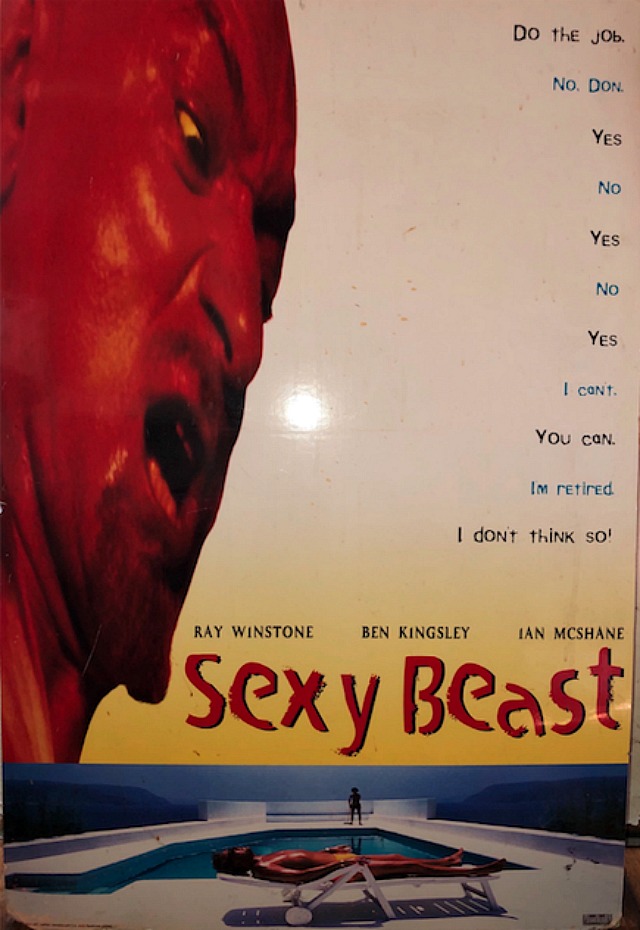 47 Comments
Sean Penn Has A Problem

Sean Penn has posted an essay on Deadline that basically castigates the industry for refusing to give any awards to A Star Is Born director Bradley Cooper.

A well-placed source has sent Hollywood Elsewhere what is alleged to be an early draft of Penn’s Deadline essay. I’m not saying this was actually written by Penn, but he may have…who knows? Or maybe someone else did. Either way it reads as follows:

“Bradley Cooper has a problem, all right, and it’s you, the industry voters. Seriously, what’s up with you guys? Are you blind, resentful, obstinate…what’s your problem? Cooper has made the most successful contemporary love story of all time and you’re blowing him off across the board? So far he hasn’t won shit. We all know he’s isn’t winning the Best Director Oscar and the film sure as shit isn’t winning the Best Picture Oscar.

“I mean, you guys were told and told for months that this film is a stupendous fucking award-winner, and now you’re saying ‘fuck you’ to Bradley, me, and even Variety‘s Kris Tapley? Did you guys take a secret vote and decide to stick it to A Star Is Born for spite? Or…what, to fucking embarass us? The other day Bradley said he’s embarassed that he didn’t get nominated for Best Director. You embarassed him!

“I told you guys last March that A Star Is Born is ‘one of the most beautiful, fantastic…it’s the best, most important commercial film I’ve seen in so many years.’

“And then last September Tapley told you that A Star Is Born “is an across-the-board Oscar contender…it has the muscle to achieve what only three films in movie history ever have: Win all five major Academy Awards (picture, director, actor, actress, and screenplay).’

“You guys were instructed, you were prepared, you were given cue cards and told how it was going to play out by people who know what goes, and then you all gave us the finger and told us to take a fucking hike. Well, fuck you right back!

“In the end, the apples and oranges of film competition, and the inequity of advertising budgets has always left the Academy Awards with some inevitable aftertaste of the alcohol most of us have to drink to get through them. To spare myself potential disappointment, I’m raising a glass in advance to Bradley Cooper and A Star is Born. Surely a raised glass is as legitimate as a globe of gilded gold or a male statuette minus a penis (also gold gilded). God forbid it have balls this year!

“A Star is Born is simply everything that movies should be. If we honor anything, this should be it.”

Albert Finney, rest his soul, was always a flinty, lion-like actor of the first alpha-male order. When I recall his best middle-period work I think of the angry drunk in Under The Volcano, George Dunlap in Shoot The Moon, “Sir” in The Dresser — edgy contrarians, bellowing, lashing out. But there’s a difference between delighting in a young actor’s dash and pizazz, and admiring or saluting the work of an older, non-dashing fellow who enjoys bending the elbow and has settled into a certain workmanlike approach to his craft.

Much of Western Civilization (certainly the female half) swooned over the slender, rakishly handsome Finney in his mid to late 20s, the fellow who starred in Saturday Night and Sunday Morning (’60), Tom Jones (’63) and Two For The Road (’67). I wish I could have seen him perform on-stage in the late ’50s, when he was completely engaged and on fire.

But then Finney’s drinking started to add to his frame and he more or less become a chunky character actor of consequence, certainly by the early ’70s, and that is who and what Finney was for most of his life — a gifted, justly admired, somewhat beefy and then flat-out bulky guy who was never less than first-rate when the writing was up to speed and the pressure was on.

In a 6.24.82 Rolling Stone piece (written by David Rosenthal) called “This Might Possibly Be Albert Finney,” the 46-year-old actor spoke about his early days and the arc of his career:

“’As a youth, it seemed relatively attractive to be the roaring boy,’ Finney says. ‘You know, where you drank at the pub during lunchtime and then gave a performance. I went through a period where I thought, ‘Oh, yes, it’s terrific to be like that, to be John Barrymore,’ that kind of syndrome. I found the idea of it appealing, playing that role, but my system in those days — it’s [become] more hardened since — actually couldn’t cope with it. I used to go on these drinking sessions with various mates, and after a bit, they’d help me out of the bar so I could throw up somewhere.

“I guess it’s possible that it was a kind of escape hatch. If you’re regarded as someone of talent, expected to be an achiever, perhaps if you screw yourself up, they’ll say, ‘Well, if only he hadn’t become an alcoholic, he would have fulfilled the promise.’ But it didn’t happen for me because I simply couldn’t do it. I could not be John Barrymore.’

“It isn’t that Albert Finney is abstemious these days, only that he generally stays away from the hard stuff. He can imbibe quite seriously, but no one’s ever mentioned him in league with, say, Peter O’Toole. And it has never, by all accounts, affected the work. ‘Albert could drink a gallon of wine at night, be on the set the next morning and do everything perfectly the first time,’ says John Huston, the director of Annie.