Gray suit and a black T-shirt…cool. But with shiny white sneakers? I’ve always harbored an inexplicable animal dislike of Taron Egerton, and this cinches it. The white shoes aren’t entirely Egerton’s doing — it’s the fashion frame of reference he grew up with. I’ve long contended that Millennials (Egerton was born in November ’89) have the worst fashion sense of any generation in the history of western civilization. 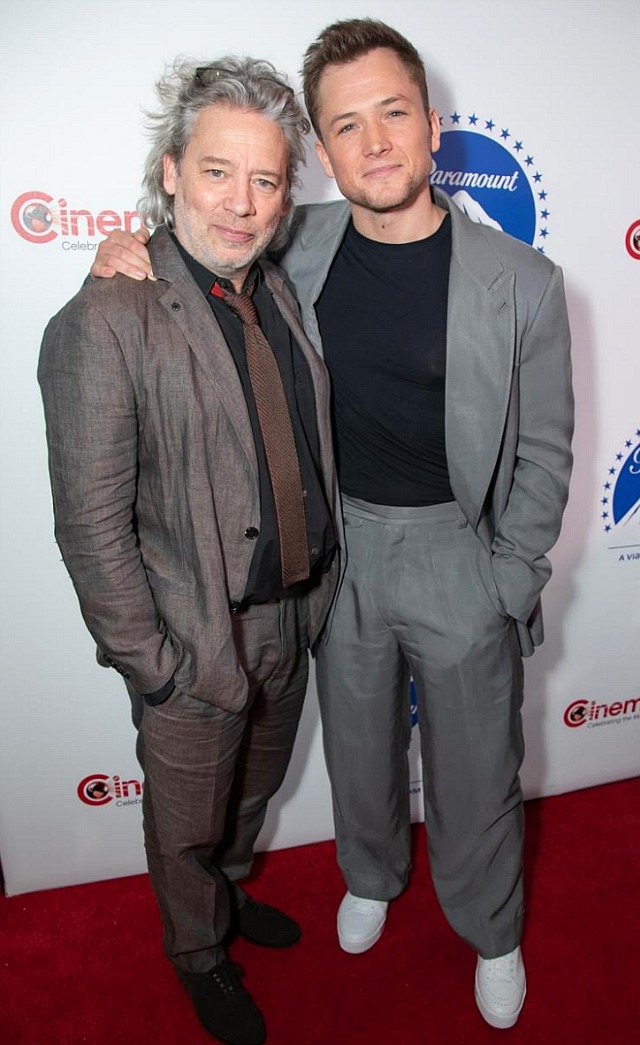 I can’t believe I’m actually going to hump it down to the Arclight to pay money to see The Best of Enemies, which is allegedly half-decent but less than electric or galvanizing. That’s because STX and Sunshine Sachs didn’t invite a lot of us to a screening, and offer to send any streaming links.

Based on Osha Gray Davidson‘s “The Best of Enemies: Race and Redemption in the New South”, it’s about some kind of mano e mano that led to a rapproachment between civil rights activist Ann Atwater (Taraji P. Henson) and Ku Klux Klan leader C.P. Ellis (Sam Rockwell) in 1971.

To go by this trailer for Andrew Slater’s Echo in The Canyon, there’s a night-and-day difference between (a) what seems like a generic boomer nostalgia doc that explores and celebrates the ’60s Laurel Canyon musician community (Jackson Browne, Ringo Starr, Brian Wilson, Eric Clapton, Beck, Michelle Phillips, David Crosby, Cat Power, Lou Adler, Stephen Stills) that influenced everyone and everything back in the day, and (b) a rich, double-down, grade-A, personal-confession doc like A.J. Eaton and Cameron Crowe‘s David Crosby: Remember My Name.

Echo in the Canyon opens on 5.24 at Arclight’s Cinerama Dome in Los Angeles. Jakob Dylan, the Wallflowers crooner and son of Bob Dylan, handles the narration and interviewing. Right away the question is “why him? what’s the connection?”

From my Sundance review of the Eaton-Crowe doc: “Triple grade-A doc…the antithesis of a kiss-ass, ‘what a great artist’ tribute, but at the same time a profoundly moving warts-and-all reflection piece…hugely emotional, meditative, BALDLY PAINFULLY NAKEDLY HONEST…God! There’s a special spiritual current that seeps out when an old guy admits to each and every failing of his life without the slightest attempt to rationalize or minimize…’I was a shit, I was an asshole, how is it that I’m still alive?,’ etc. Straight, no chaser.

“And this isn’t because I’m partial to boomer nostalgia flicks or because so many are being shown here, or because I grew up with the Byrds (12-string twangly-jangly), Joni Mitchell, Crosby, Stills and Nash and that whole long lyrical–frazzled history. It’s about the tough stuff and the hard rain…about addiction and rage and all but destroying your life, and then coming back semi-clean and semi-restored, but without any sentimentality or gooey bullshit.”

18 Comments
But Of Course

From The Washington Post‘s Ellen Nakashima, Carol D. Leonnig and Rosalind S. Helderman: “Members of Robert Mueller’s team have complained to close associates that the evidence they gathered on obstruction was alarming and significant.

“‘It was much more acute than Barr suggested,’ said one person, who, like others, spoke on the condition of anonymity because of the subject’s sensitivity.

“Some members of the office were particularly disappointed that Barr did not release summary information the special counsel team had prepared, according to two people familiar with their reactions. ‘There was immediate displeasure from the team when they saw how the attorney general had characterized their work instead,’ according to one U.S. official briefed on the matter.”

Like Francis Coppola, Brian DePalma‘s heyday was in the ’60s, ’70s and ’80s. The film looks and feels low-rent. Nikolaj Coster–Waldau and Clarice van Houten (who replaced Christina Hendricks) are “names” but not stars. The 2017 shoot (partly in Spain, partly in Denmark) was reportedly a mess.

“I had a lot of problems in financing Domino. I never experienced such a horrible movie set. A large part of our team has not even been paid yet by the Danish producers. This was my first experience in Denmark and most likely my last.

“Domino is [about] a revenge of a cop duo against terrorists who killed another. For me the film was more of an opportunity to explore a visual narrative. In the film, terrorists are obsessed with the idea that their actions are instantly visible live on the internet or on TV. It’s not my project. I did not write the script.” — Brian DePalma quoted by The Playlist‘s Rodrigo Perez on 6.5.18.

The fifth-estate Cinemacon cheering section went apeshit this morning over a longish Rocketman reel. Most of it seems to boil down to “Taron Egerton‘s performance as Elton John is a lock for a Best Actor Oscar nom.” Fine, great, terrific. Nobody said a word, of course, about the fact that Egerton’s singing voice (how many times have I said this?) sounds like a cruise-ship imitator rather than the real thing. Which would seem to contrast poorly with Rami Malek‘s very Freddie Mercury-like singing voice in Bohemian Rhapsody.

I and I alone will determine the value of Egerton’s performance (which will obviously include his not-good-enough imitation of John’s singing) and of course Rocketman itself when I see it in Cannes. 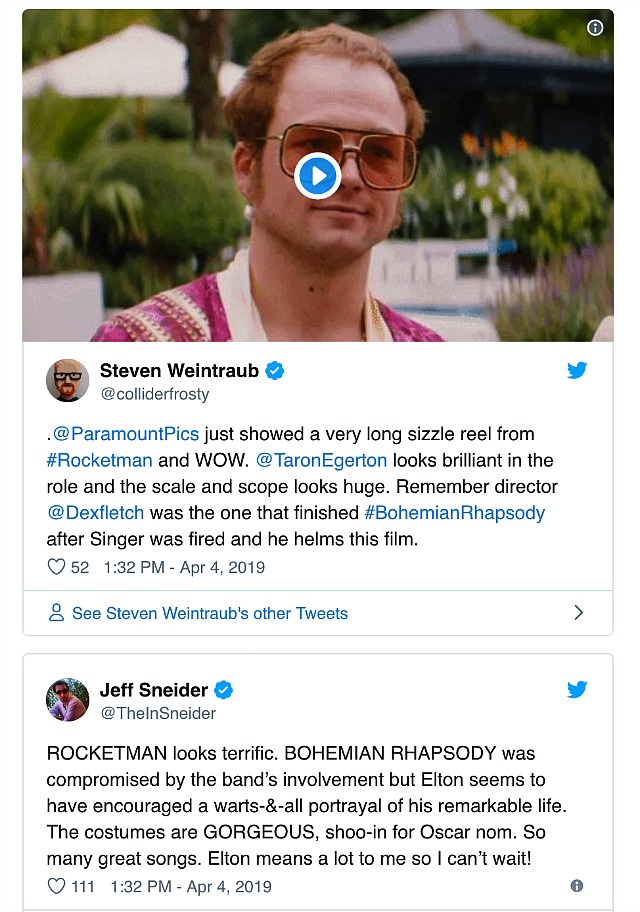