Pete BUDDHA-judge “is a polyglot. He’s conversational in Spanish, Italian, Maltese, Arabic, Farsi and French, and taught himself to speak Norwegian. He also plays guitar and piano, and in 2013 performed with the South Bend Symphony Orchestra as a guest piano soloist.” — from Mayor Pete’s Wikipage. 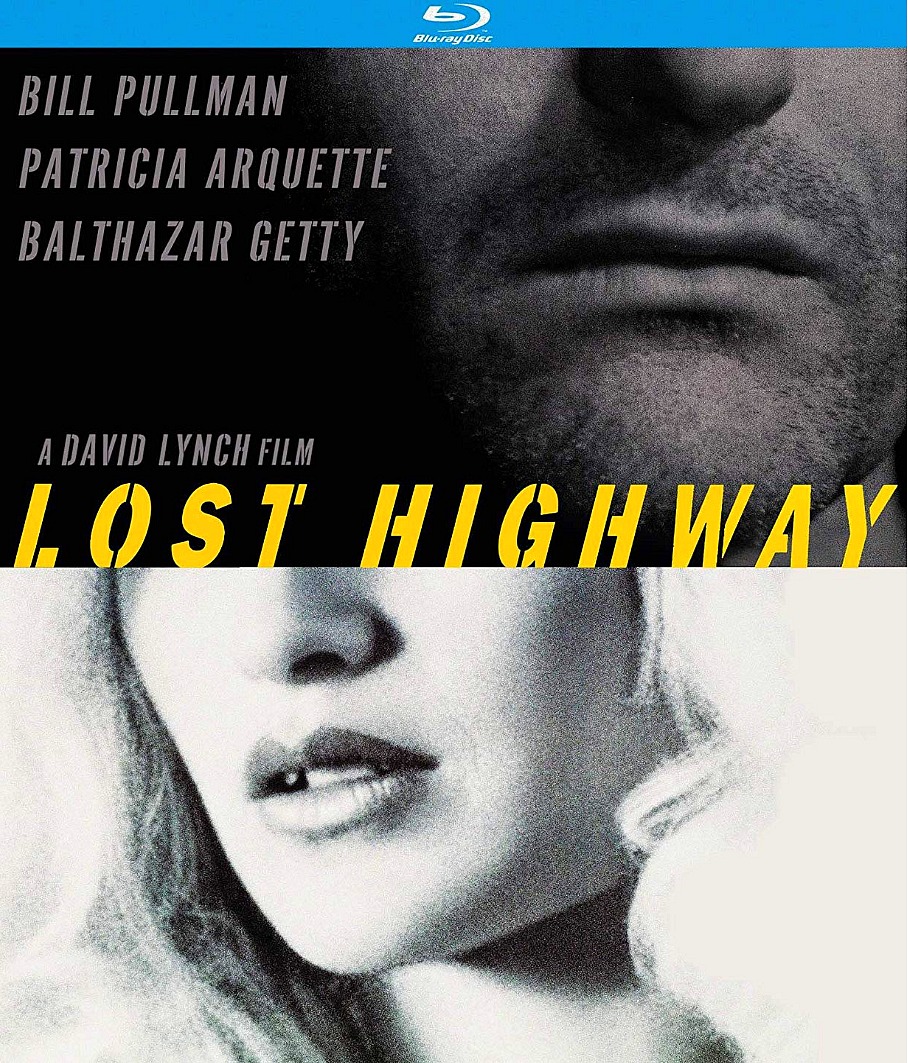 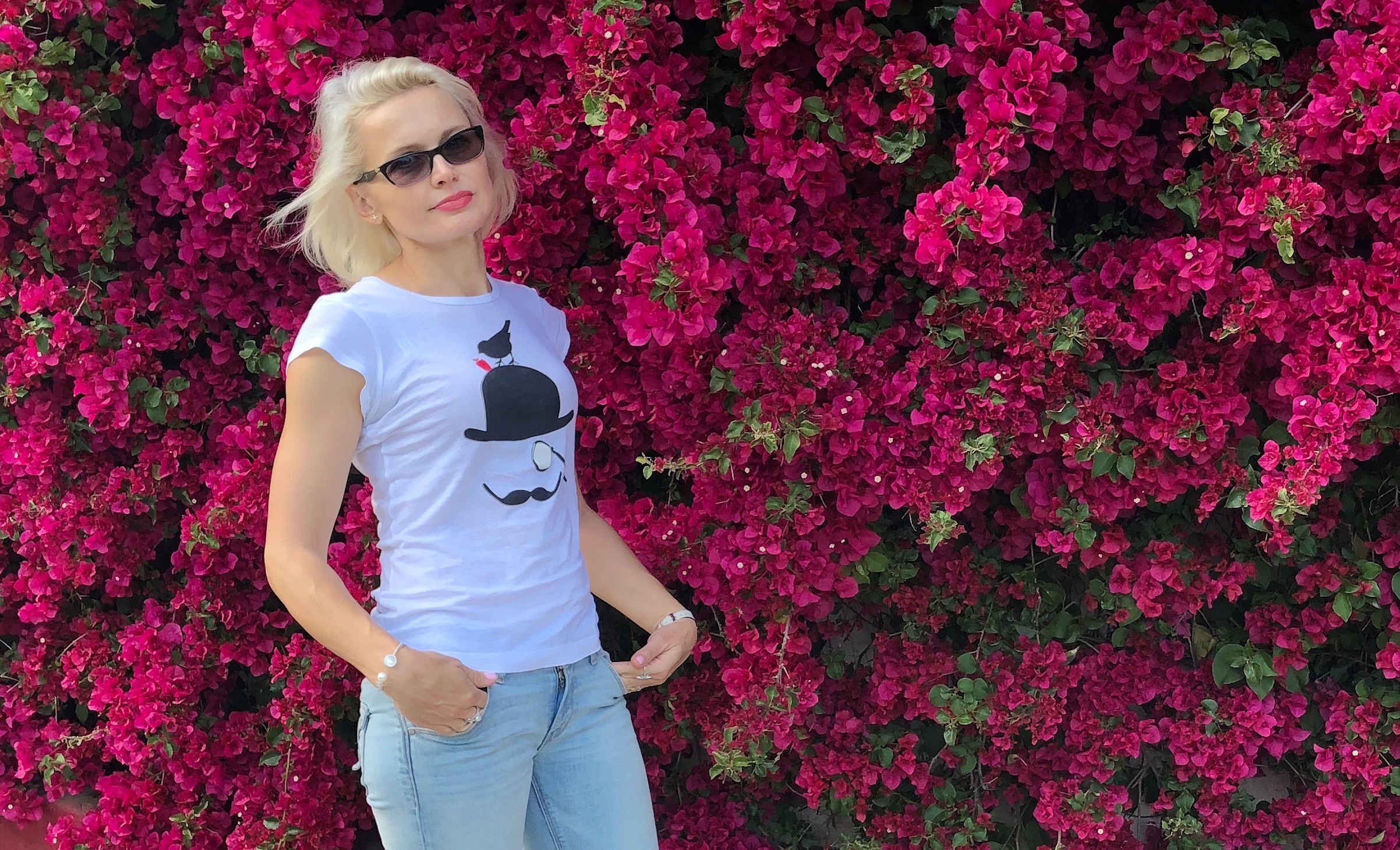 During yesterday’s hike up to and through Franklin Canyon. 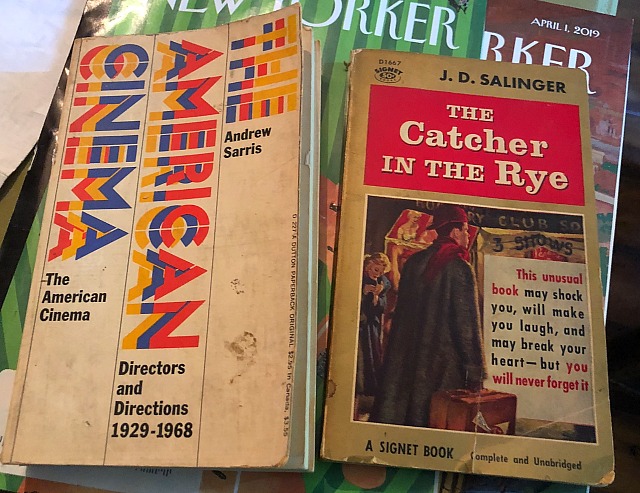 A disintegrating “Catcher In The Rye” paperback, bequeathed by my father when I was 16 or 17. 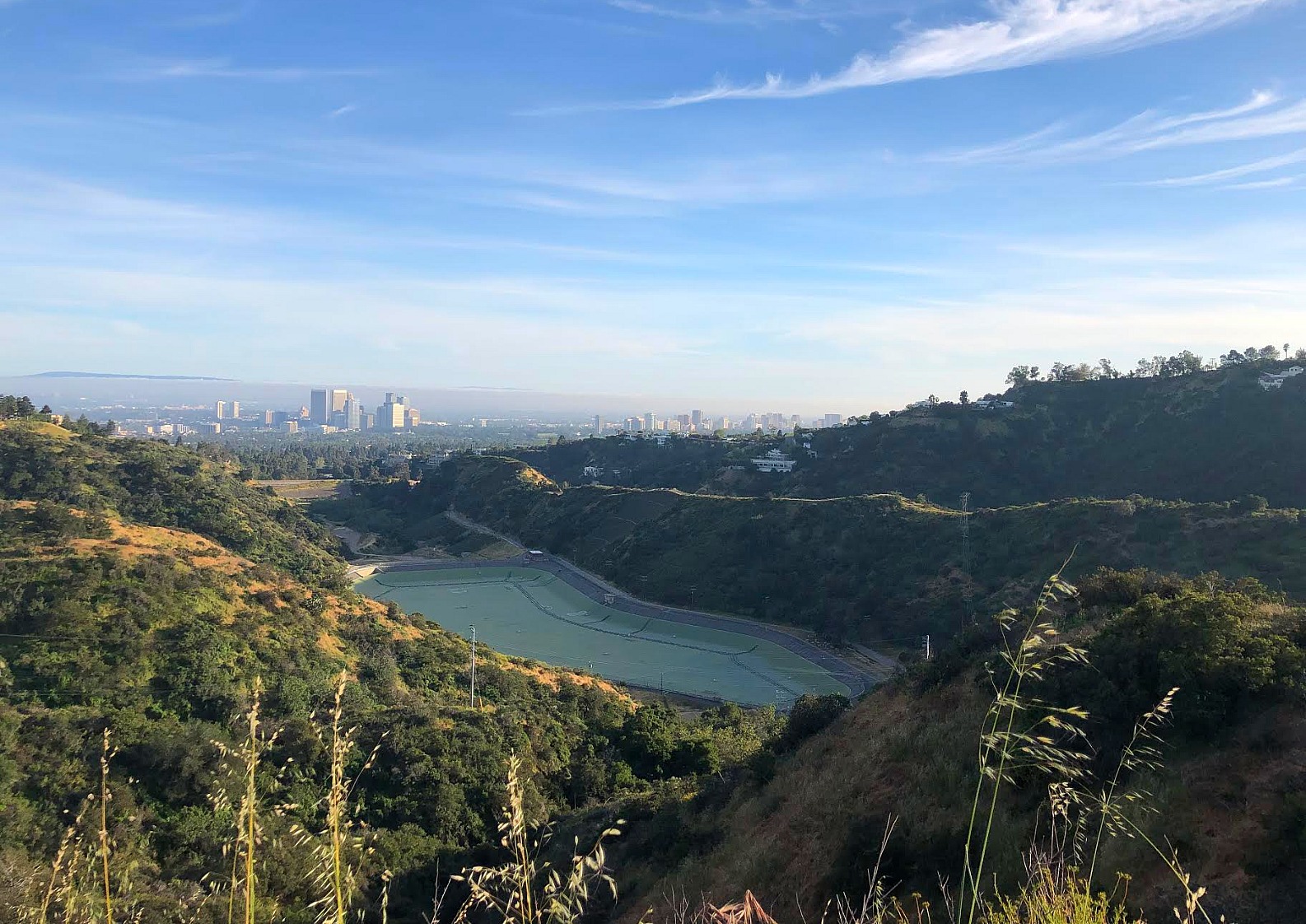 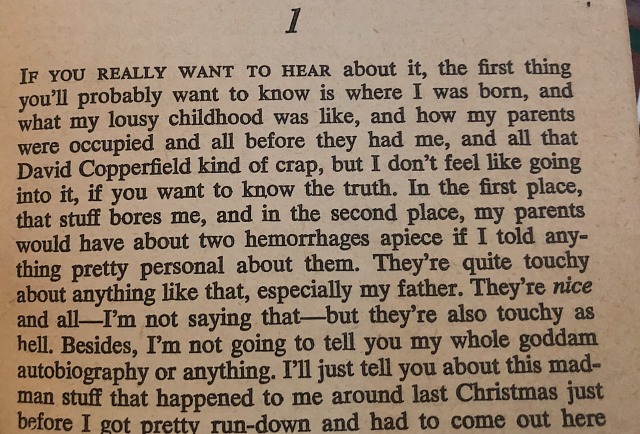 There was always something in me that loved slightly longer, grown-out hair, and was oddly repelled by too-short hair — West Point hair, cop hair, whitewalls, undercuts, Hitler youth, etc. To this day I’m vaguely put off by the sight of some guy’s closely-shorn scalp. But at the same time I understand and can roll with cue-ball heads. 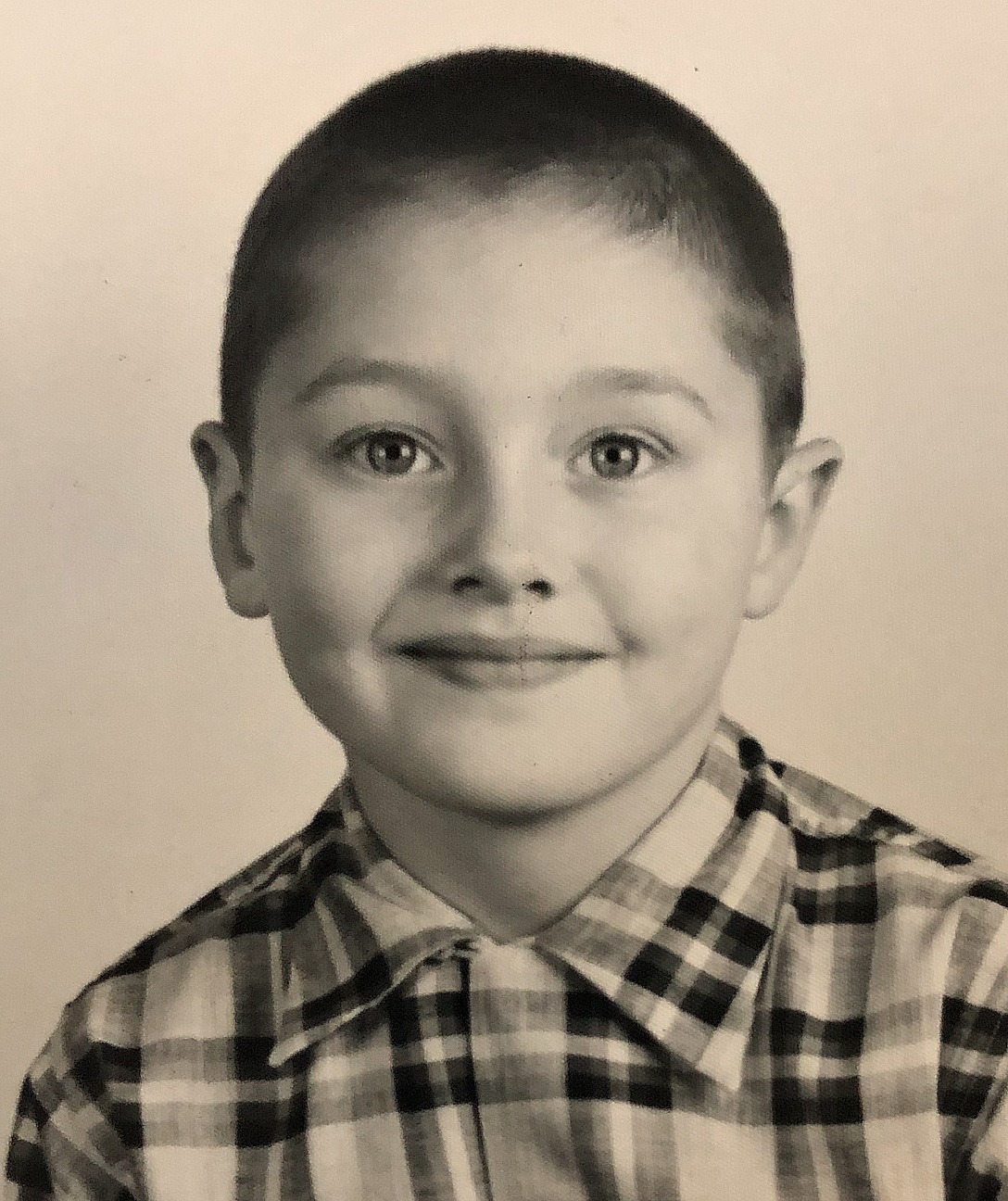 My father was the last guy in the world you wanted to watch a movie with. Or at least he was when I was young. He was the Ultimate Moviegoing Killjoy.

Every so often he’d take me to a film, but for some reason he so hated watching films in the usual way (i.e., from the beginning) that we’d never arrive before the film started but always around the three-fourths mark. 20 or 25 minutes before the ending. We’d watch the conclusion, wait for the next show to start, and then watch the three-fourths or four-fifths that we’d missed and then leave at the point where we came in.

This trailer for season #2 of Big Little Lies (6.9.19) has a cheap, pandering odor. Soap-opera stuff. I’m presuming it doesn’t represent the actual style and content of it, especially considering that the great Andrea Arnold (American Honey, Fish Tank, Red Road) has directed all seven episodes.

How do fires start outside of arson? Electrical sparks, a carelessly tossed burning cigarette…what else? News reports indicate it had something to do with wooden scaffolding that was being used for restoration. A good portion of the main roof has reportedly collapsed; ditto the famous tall spire.

The just-released Cannes ’19 poster is an image of the late Agnes Varda shooting her first film, La Pointe Courte, sometime in the summer of ’54. Pic costarred the unpaid Phillipe Noiret and Silvia Monfort. Shot in the Mediterranean coastal city of Sete, the film’s total budget was $14K. 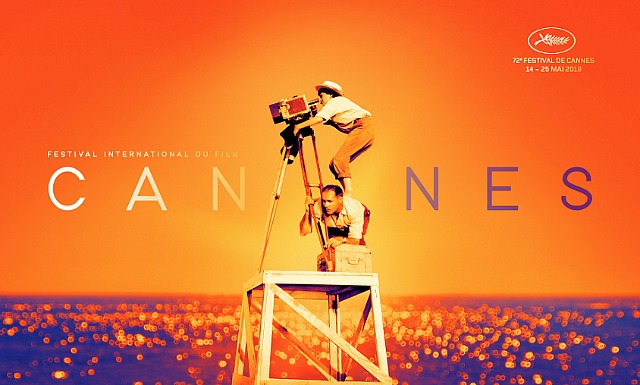 I watched an episode of Game of Thrones back in 2012, and my immediate response was “this is grandiose melodrama but it’s well made, well acted…intelligent people are behind this.” I’ve watched a few slivers since but never another full episode, and I feel quite serene about that. Mainly because I hate the faux-medieval milieu. I hate those expensively designed, finely stitched tunics and gowns and exquisite fur hoodies and fur-lined seal boots. And I hate stories in which a semi-significant character reveals in Episode 8 that he/she is actually someone else with a heretofore unsuspected agenda or, you know, is secretly descended from a certain well-thought-of character or whatever. I’ve always found Lena Headey foxy but I’ve never been able to decide whose face I hate more — that of Kit Harington or Nikolaj Coster-Waldau. I hate sagas in which little kids are pushed out of windows. I hate pretentious-sounding character names like Daenerys Targaryen, Davos Seaworth, Theon Greyjoy, Tyrion Lannister, Samwell Tarly. I hate the idea of flying dragons despite their gargantuan bulk and weighing at least as much as a blue whale. I hate long-running miniseries that seem to be mainly about perpetuating their own mythology. I guess you could say I hate the general GoT sprawlingness, the go-for-the-bucks attitude, everyone pocketing their paychecks. Fuck all of that.