Why did this Scott Mantz-in-Liverpool Facebook photo weird me out like it did? (He’s attending Universal’s press junket for Danny Boyle and Richard Curtis‘s Yesterday, which opens in late June.) I guess it’s because I’m not accustomed to thinking of the Beatles as a quartet of 475-pound, Richard Kiel-sized giants. Plus they just look weird alongside Little Mantz. Tribute statues can be larger than life if they’re elevated a few feet off the ground on a marble or iron pedestal, but if they’re planted alongside pedestrians they should be life-sized. As in “yeah, it’s us but we’re no different than anyone else.” Except creatively, that is, and to some extent spiritually, I suppose. The Beatles were/are mythic figures who cast a giant shadow, but this is a crude way of putting it. 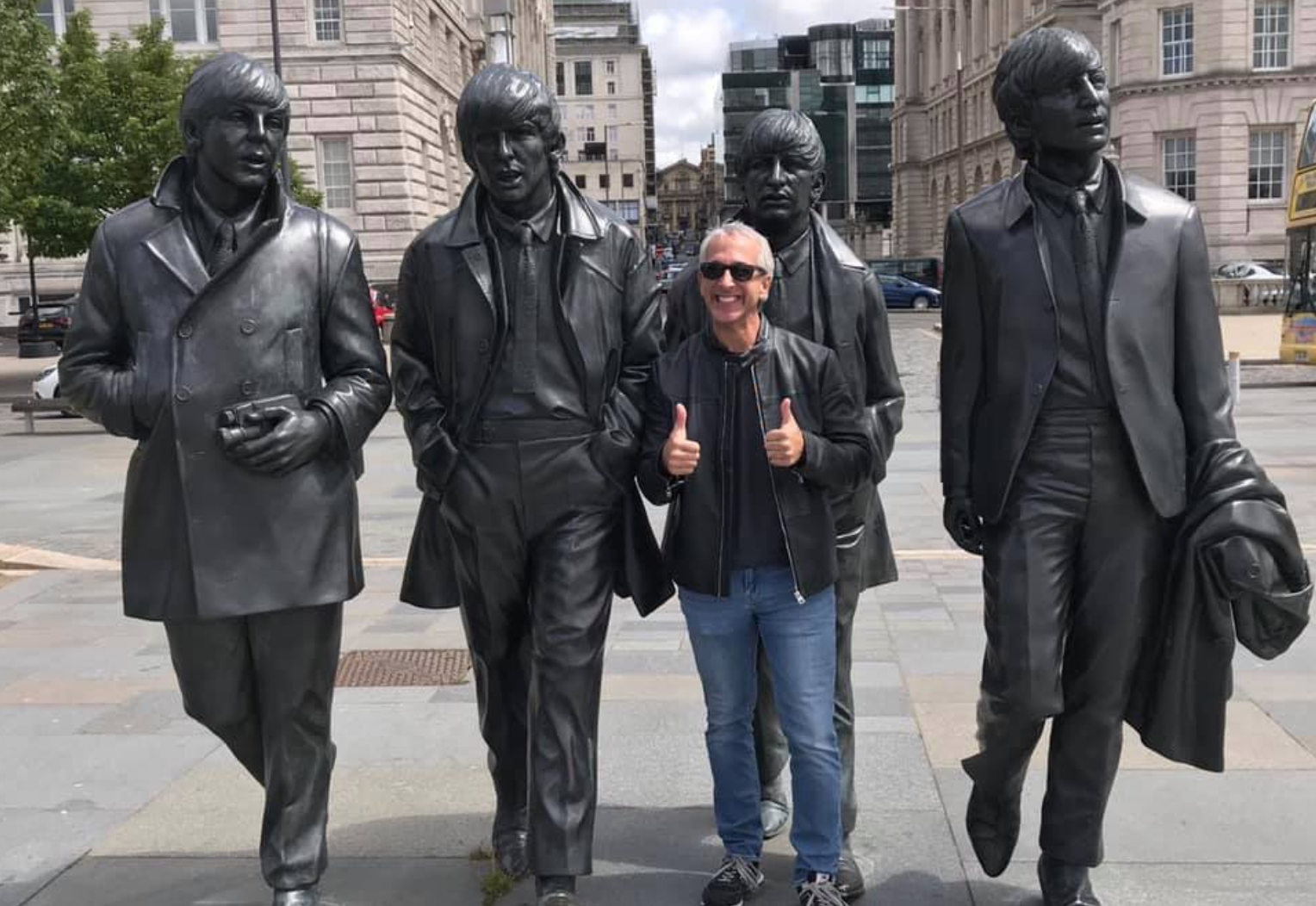 A week ago I conveyed a certain muted respect for Jean-Pierre and Luc Dardenne‘s Young Ahmed. I described it fairly and accurately an “an 84-minute waiting-game movie about a young Islamic psychopath and would-be Jihadist (Idir Ben Addi) planning to murder his female teacher out of blind adherence to Islamic derangement syndrome.”

Everyone understands that in a European or U.S.-made drama (or comedy even) there’s only one reason to introduce a character with strong Islamic beliefs — i.e., to start the clock ticking on whether or not this character will commit some act of ghastly terror.

This is exactly what the Dardennes have done with Young Ahmed, which should probably be re-titled Young Islamic Asshole and subtitled Just For Laughs, How About Killing Yourself Without Taking Any Innocent Victims With You?Which is why it’s a “waiting game” film because all you can think about is “who is this kid going to kill, and will somebody kill him before he strikes?”

Except Young Ahmed ends rather profoundly. The last couple of minutes are so good, in fact, that I wound up forgiving the first 80 or so.

How good is Ahmed on a Dardennes scale? I would give it a 7.5. It’s certainly better than their last one, The Unknown Girl, which I called C.S.I: Liege. I would call Ahmed a “good but calm down”-er. Dialogue, dialogue. MCU interiors, MCU interiors. It certainly warrants respect but minus any post-screening cartwheels.

Except Jordan Ruimy‘s Cannes-whisperer is now confiding that The Young Ahmed was thisclose to winning the Palme d’Or. Then Bong Joon–ho‘s Parasite came along and the Alejandro G. Inarritu-led jury was so impressed that they decided to split the difference, giving the Palme to Parasite and the Best Director prize to the Dardennes brothers.

The red-pinkish caramel skies are my excuse for posting a touristy Arc de Triomphe photo. Although I’ve been coming here since the ’70s, last night was my first time ascending the monument’s circular metal staircase (my lungs and leg muscles were fine until the very end of the climb) and then finally standing on top and gazing all over, the late-night breezes gently slapping my face. 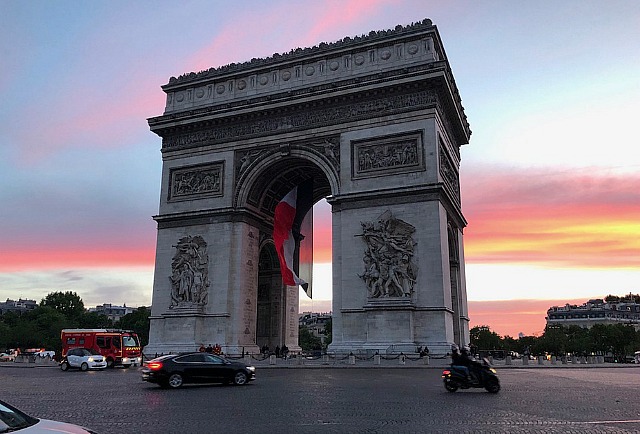 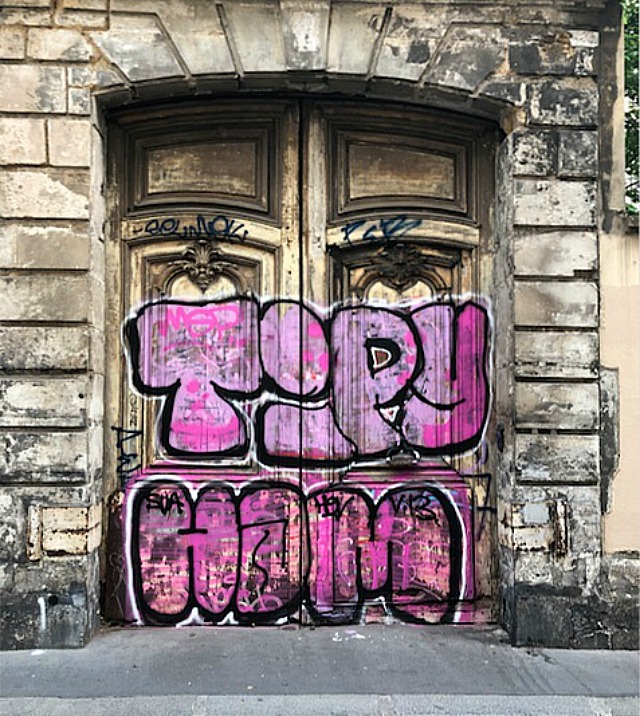 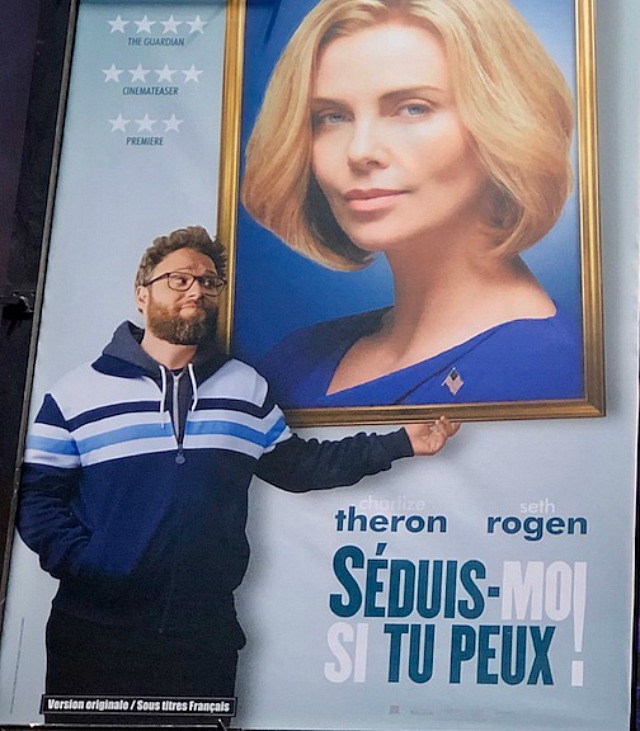 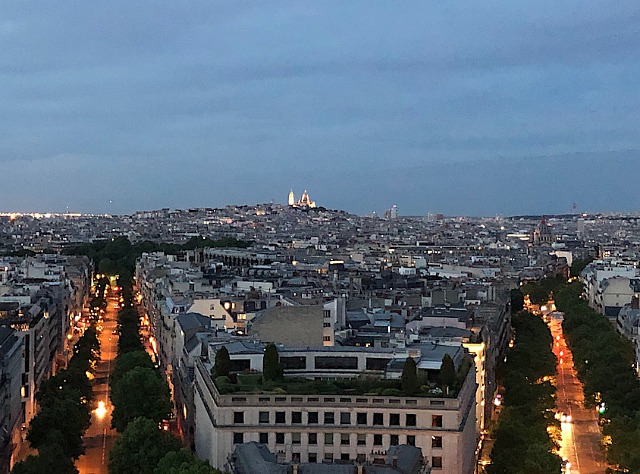 “Booksmart has been compared to Superbad (2007), and it’s not hard to see why. They’re both raucous but heartfelt stories about two teenage friends trying to make the most of a big night out before setting off on different paths that will probably pull them apart. But there’s another movie that comes to mind when looking at Beanie Feldstein’s Molly — Alexander Payne‘s Election (1999), and its dogged would-be class president Tracy Flick (Reese Witherspoon), another eyes-on-the-prize striver whose ambitions have kept her apart from the rest of her classmates.

“In Booksmart, Molly, the Tracy equivalent, gets placed front and center, given a best friend and a good time. In some ways (though not in their politics), Molly feels like Tracy Flick, set free.

“And yet Booksmart can’t entirely separate itself from the kind of “you think you’re better than me” resentments that Election‘s teacher protagonist harbors toward Tracy (who does, of course, think she’s better than everyone). Molly experiences a mild comeuppance regarding her own superiority complex, but it rests on the assumption that college acceptance is a pure meritocracy, and that she’s misjudged everyone.

“Realistically, it’s more likely she misjudged the resources that those classmates had available to them. The idea that most of us really do have to work that hard to compete with those who have advantages that we never will — and that we still might not get what we want — is less comfortable as the stuff of comedy. But it’s a lot closer to the truth.” — from Allison Wilmore‘s “Booksmart Has A Blind Spot When It Comes To Class,” posted on 5.24.

Wiki excerpt: “On 6.24.47 private pilot Kenneth Arnold claimed that he saw a string of nine, shiny unidentified flying objects flying past Mount Rainier at speeds that Arnold estimated at a minimum of 1,200 miles an hour. The first post-WWII sighting in the U.S. and the first of the modern-era UFO sightings, Arnold’s description of the objects also led to the press quickly coining the terms flying saucer and flying disc as popular descriptive terms for UFOs.”

“Videos filmed by Navy pilots show two encounters with flying objects. One was captured by a plane’s camera off the coast of Jacksonville, Fla., on Jan. 20, 2015. That footage, published previously but with little context, shows an object tilting like a spinning top moving against the wind. A pilot refers to a fleet of objects, but no imagery of a fleet was released. The second video was taken a few weeks later.”

This interview with Jack Nicholson happened in ’07, when the renowned actor was 70. With his half-raspy, half-wheezy tobacco voice and gutty tee-hee chuckle, Jack sounds like Barnacle Bill…like some old coot smoking an old stogie or a corncob pipe while sitting in a creaky rocking chair. And he wasn’t even that old. He’s 82 now, and even that‘s not so old. Ask Norman Lloyd.

I’m not buying the Godfather anecdote. First, Nicholson could have never sold himself as an Italian-American. He’s an Irishman from New Jersey, and no amount of deft acting could have hidden that fact. Secondly, I’ve always understood that he didn’t turn down The Godfather offer because he was “doing something else” (Nicholson is almost certainly alluding to The King of Marvin Gardens, which shot during the winter months of late ’71 and early ’72) as much as his belief that he was too old to play a character in his mid 20s, Michael Corleone having been born around 1920. Nicholson turned 35 in ’72, and looked it.