So the catty-watties in Tom Hooper‘s Cats (Universal, 12.20) are their own species — cat-human hybrids that don’t much resemble their cousins who cavorted in the popular stage show. Small and lithe with cat ears and whiskers and tails, but darting around on their hind legs and dressed in leotards. And no claws. More of a mocap than a costume-and-makeup thang.

Flatline reaction to Francesca Hayward‘s Victoria, I’m afraid, and a mild shrug for Taylor Swift‘s Bombalurina and Idris Elba‘s Macavity. If anyone owns it, it’s Jennifer Hudson, I suppose. I immediately recognized Judi Dench (Old Deuteronomy) and Ian McKellen (Gus the Theatre Cat). I wish I was allowed to say that James Corden and Rebel Wilson play fat cats, but that era has passed, I’m afraid. Their characters are named Bustopher Jones and Jennyanydots.

The title of this post was stolen from a 7.18 trailer review riff by N.Y. Times contributor Bruce Fretts.

Any thoughts you may have had about Jerry Bruckheimer and Joseph Kosinki‘s Top Gun: Maverick possibly dealing subtle cards and not necessarily using sledgehammer tactics are now…well, let’s just say that hopes along those lines are temporarily dashed. If this just-released teaser is any kind of indication, I mean.

San Diego-based fighter pilots!….the aura of studly military rock stars, coping with buried anger and the burden of expectations, brusque and strapping and throwing their heads back in laughter while playing piano in a honky tonk. (Like Miles Teller‘s son of Goose Bradshaw character does in a blink-and-you’ll-miss-it clip.) And the women who both love and compete with them. With the big climactic test of skill and character looming. And so on.

I haven’t read the script (co-authored by Peter Craig, Justin Marks, Christopher McQuarrie and Eric Warren Singer) but the tip-off is a Wikipedia description of Jennifer Connelly‘s character — “a single mother running a bar near the Naval base.”

A single mother! Running a bar! Who dispenses sage advice while mixing a killer Mojito! With, I’m guessing, a possible age-appropriate interest in Tom Cruise‘s Maverick, who’s now a creased and weathered Naval flight instructor. And perhaps, in keeping with the theme of launching the new generation, with an aspiring fighter-jock daughter? Or am I pushing too far?

I want a scene in which Cruise tells Connelly that Kelly McGillis‘ Charlie Blackwood left him for another woman, and then (beat, beat) Connelly tells Cruise, “Yeah, I know…it was me.” Or: “I’m sorry, that’s tough. (beat) She left me too.”

Ed Harris to Cruise: “Captain…what is that?” Jon Hamm playing some kind of tough nut. And Val Kilmer back for seconds. All the young dudes of the original Top Gun are now in their late 50s and early ’60s.

Best shot in the trailer: Crew-cutted Cruise riding a motorcycle without a helmet, bathed in magic-hour amber, loving the wind and grinning the grin.

Cruise’s six career-best roles (in this order): (1) Vincent the assassin in Collateral, (2) the titular Jerry Maguire, (3) Joel Goodson, the U-boat commander of Highland Park, (4) Charlie Babbitt in Rain Man, (5) Ron Kovic in Born on the Fourth of July, and (6) Frank T.J. Mackey in Magnolia. Honorable Mention: Mitch McDeere in The Firm.

For what it’s worth, this is the funniest Good Boys trailer yet. Assembling an effective trailer for an R-rated tweener comedy requires a certain finesse — timing, cutting, pacing, the right kind of English. The Universal marketing guys got it right this time. Pic opens on 8.16.

“A little too imitative of Superbad with the minor tweaks of three (rather than two) even-younger male protagonists, more swearing, and a lot more drug references, Good Boys lacks that film’s wit and heart. It’s a lively, slick package, yet crude and obvious at every turn, unlikely to attract either the critical or word-of-mouth favor that might create a sleeper hit for Universal’s planned August release.” — from Dennis Harvey’s SXSW Variety review, filed on 3.12.19.

“Lee Eisenberg and Gene Stupnitsky‘s Good Boys script is packed wall-to-wall with jokes, to the point that this critic missed lines that were drowned out by the roars of laughter from the packed house at [Austin’s] Paramount Theatre. Having written on a string of sitcoms and helmed episodes of The Office, Stupnitsky brings a finely honed skill for punchline pacing to his feature directorial debut. [Except] it’s mostly the same jokes over and over: cute kids cursing and not understanding sex stuff.

4 Comments
Blowin’ In The Wind

My attitude before seeing Ursula Macfarlane‘s Untouchable was “what will this doc tell us about Harvey Weinstein‘s misdeeds and the landmark reporting that brought him down…what will it tell us that isn’t already part of the conversation, and which might move the needle forward?” The answer is that it isn’t so much about Harvey (certainly not in terms of examining his psychology) as several of his victims, and that getting to know who these women are and what they went though in their own words…all I can say is that it matters a great deal, and that their stories, one upon another and then another, make you feel the deep-down rage and melancholy. At the end of the day it’s not so much a prosecutorial indictment (although it obviously is that) as a broken heart movie. It says “this happened and now what?”

The poster for Untouchable is excellent, by the way. 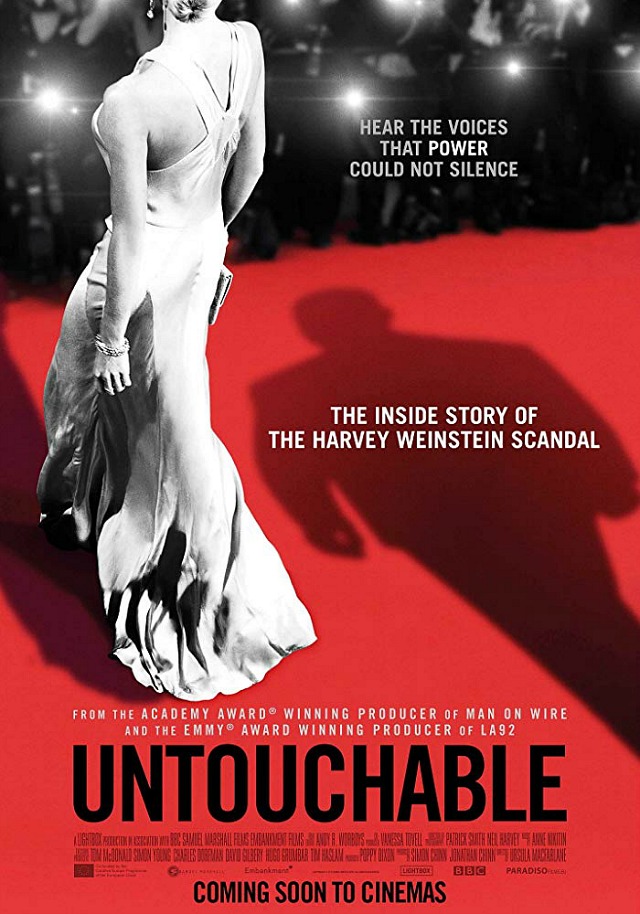 “I wasn’t surprised to hear so many people expressing fear that the racist, divisive, climate-change-denying, woman-abusing jerk who is our president was going to get re-elected, and was even seeing his poll numbers rise.

“Dear Democrats: This is not complicated! Just nominate a decent, sane person, one committed to reunifying the country and creating more good jobs, a person who can gain the support of the independents, moderate Republicans and suburban women who abandoned Donald Trump in the midterms and thus swung the House of Representatives to the Democrats and could do the same for the presidency. And that candidate can win!

“But please, spare me the revolution! It can wait. Win the presidency, hold the House and narrow the spread in the Senate, and a lot of good things still can be accomplished. ‘No,’ you say, ‘the left wants a revolution now!” Okay, I’ll give the left a revolution now: four more years of Donald Trump.” — from 7.16.19 N.Y,. Times column by Thomas L. Friedman, titled ‘Trump’s Going to Get Re-elected, Isn’t He?’

So Friedman is saying what? That only Typewriter Joe will do? AOC is not running for President.