Among the Democrats and Democratic-leaning independents polled last weekend for CNN, roughly one in five prefers the amiably liberal Joe Biden as the 2020 Democratic nominee. Slightly more than 20% — that’s all.

Kamala Harris is running second at 17% while 29% prefer the more emphatically progressive Elizabeth Warren (15%) or Bernie Sanders (14%). Combine Harris, Warren and Sanders’ percentages (46%) with Pete Buttigieg‘s 4% and you’ve got 50% of Democrats preferring someone other than Biden.

Typewriter Joe has dropped 10 points since the last CNN poll in May; Harris is enjoying a 9-point increase; Warren is up by 8 points. The usual usuals comprise the Joe team — black voters (36%), older voters (34%) and moderate and conservative Democrats (31%).

Park City posting on 1.29.19: “Mads Brugger‘s Cold Case Hammarskjöld (Magnolia, 8.16) is one of the most original-feeling investigative docs I’ve ever seen.

“It begins as an investigation into the 1961 plane-crash death of UN General Secretary Dag Hammarskjöld, which happened, we gradually learn, at the hands of colonialist bad guys. The film is about how Brugger, who casts himself as a kind of whimsical, not-quite-Hercule-Poirot-level investigator, and colleague Goran Bjorkdahl gradually uncover what happened.”

Cold Case Hammarskjöld “represents a sideways shuffle approach to discovering long-buried bones and nightmares. It is, in fact, an eccentric film, and yet the things it discovers are real and beyond ugly. It’s the mixture of curious whimsy and malevolent apartheid schemings that gives Cold Case Hammarskjöld a tone of spooky weirdness.

“Suffice that Brugger comes to believe (and in fact persuades) that Hammarskjold’s plane was shot down by Belgian-British mercenary pilot Jan van Risseghem, who was apparently doing the bidding of some ugly fellow who were angered by Hammarskjöld’s sympathy for African nativist independence movements.” — posted from Park City on 1.29.19.

Later: “I’m worried about the boys. Because you seem unwell, erratic. You hit me. You snapped. I think you need to take some real time to heal, and while you do that, I think Max and Josh should reside with me. You’re a mess, Celeste. And until you’re better, we need to think about protecting the well-being of our boys. They’re at risk here. They’re at risk in your care.”

Although Streep’s Mary Louise character is being presented as a needling, malevolent presence (which she is as far as the fate of the “Monterey Five” is concerned), she’s the only character on Big Little Lies whose company I enjoy.

Between late ’89 and early ’91 I was senior editor of Prime, a Music Plus-founded monthly that promoted CD and VHS titles. In early ’90 we decided we needed an art director for our TV Guide-sized publication. I interviewed six or seven people. My favorite applicant was a youngish, dark-haired, prim-looking woman whose name escapes. I “liked” her graphic design samples — not brilliant but they had a certain elan and consistency. She looked a bit like Tulsi Gabbard does now. Not a top-tier X-factor creative, in my view, but what could I expect given the modest salary we were offering?

I told my boss, Jeffrey Stern, and an assistant editor, Jake Stihl, that she seemed like the best of the lot. Having reviewed her “book” and resume and sized her up to a certain degree, they told me they agreed. All signs favoring. But a day or two later I had a follow-up phoner with Tulsi, and she told me she lived directly opposite the Del Amo Fashion Center in Torrance. 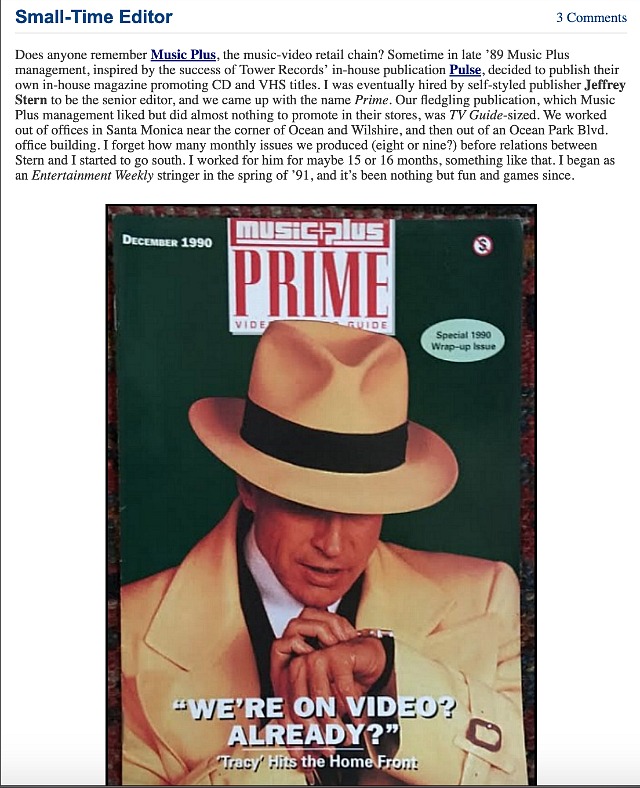 That jolted me some. I thought about it again after we hung up. I couldn’t get Del Amo out of my head. The next day I decided that Tulsi wasn’t a good fit. Stern and Stihl, taken aback if not open-mouthed, asked why. I knew my reasoning would sound odd to them, but I did my best:

“Because a person who really believes in creativity, which is to say someone living a little bit on the edge and always looking for inspiration of whatever sort, be it atmospheric or cultural or spiritual…a person who’s seriously invested in some kind of artistic pursuit and wants to be in a good position to pick up signals about whatever the next thing might be…that person would never live opposite the Del Amo Shopping Center,” I said.

“Hear me out,” I replied. “I like Tulsi and recognize that she’s at least moderately talented, but it really bothers me that she chose to live in what I feel is a toxic environment. Deliberately. The vibes that come out of Del Amo are oppressively bland. Mega-malls inspire passivity. They’re about trying to lull people into a state of submission in the same way that Las Vegas, Cancun and Disneyland do.

“It would be one thing if Tulsi lived a mile or so from Del Amo…fine. But directly opposite it? Graphic artists worth their salt live near the beach or in Koreatown or Silver Lake or Studio City or Venice or Burbank or Van Nuys…any one of dozens of Los Angeles towns wouldn’t prompt a raised eyebrow in this context. And yet Tulsi chose to inhale those Del Amo vibes on 24-7 basis, and that tells me that on some level that her ideas will be less than they should or could be.

“I’m sorry but something in my gut is genuinely unsettled about this. I would honestly feel better about hiring her if she was homeless and living in her van. To me Del Amo is poison.”

This was eight years before Quentin Tarantino‘s Jackie Brown, of course. That 1998 film lent a vague aura of mock-ironic coolness upon Del Amo, I guess. Maybe I’m just projecting.

Of the 842 new members invited to join the Academy of Motion Picture Arts and Sciences, half are women and 29% are people of color. The Academy has thereby doubled the percentage of nonwhite members over the last four years. In 2015, people of color accounted for 8% of Academy members. In 2019, that percentage has doubled. As it stands, the Academy counts 8,946 active members. The total membership including retired members is 9,794.

In a view from a spring research screening, it is claimed that Marielle Heller‘s A Beautiful Day in the Neighborhood (Sony, 11.22) “works when it focuses on Tom Hanks as Fred Rogers. He’s undeniably charming and infectiously heartwarming as the TV icon. He nails the spirit and voice of Rogers, and the physical resemblance is close enough.”

Not a surprising opinion as pretty much everyone agreed that Hanks was perfectly cast, and that inhabiting Rogers wouldn’t involve much of a stretch.

The viewer also asserts, however, that Hanks’ performance “will be regarded as supporting since he’s absent throughout the majority of the third act, due to a focus on Matthew Rhys‘ journalist character and his relationship with his dying dad.”

Be that as it may, a lead actor is rarely defined by his/her amount of screen time , but the degree to which he/she dominates the narrative. Remember that Anthony Hopkins‘ Best Actor Oscar for The Silence of the Lambs resulted from only 16 minutes of screen time.

“Either way, Hanks could finally be looking at his first Oscar nomination in almost 20 years,” the guy goes on. “The film is emotional and could be in the running for a Best Picture nomination if there are no issues over the size of the Rogers role. I’d also keep an eye on Marielle Heller for Best Director. Her direction keeps the movie enchanting even when the script runs into some dicey passages, and it’s time for another female director nomination.”

In North by Northwest Cary Grant‘s Roger Thornhill drops a lot of cash on a lot of random expenses — cabs, beverages, tips, bus tickets, dry cleaning. I’ve calculated that he spends a minimum of $275, which comes to roughly $2390 in the 2019 economy. That’s a lot to be carrying around. The film was shot in the summer of ’58, when the only credit card was Diner’s Club and no one had ever heard of debit cards. Thornhill, on the run for murder and unable to just stroll into his local bank for a withdrawal, had to pay for everything with pocket cash. 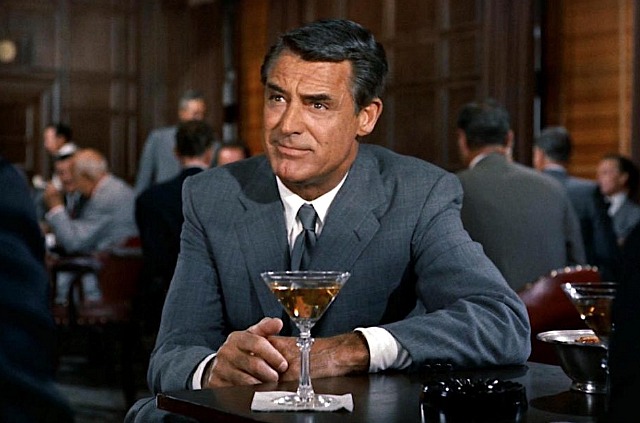 In some ways Silvio Berlusconi was the Italian Donald Trump — fat, corrupt, arrogant. Except the ten-years-older Berlusconi (who’s now serving in the Italian Parliament) has a lot more dough. The former Prime Minister of Italy (three separate terms, nine years in total) owns Mediaset, the largest broadcasting company in that country. Berlusconi’s terms as Prime Minister service were plagued by conflicts of interests, sex scandals and a generally intemperate performance marked by poor judgment.

I’ve been hearing for well over a year that Paolo Sorrentino‘s Loro (Sundance Selects, 9.20) doesn’t work, that it suffocates in its own excess and delirium. But the trailer seems diverting enough — eye-candy avoiding the soulful at all costs.

The Rotten Tomatoes rating is 83 with an audience score of 54%.