The decision to push Leo’s Rick Dalton performance in Once Upon A Time In Hollywood for Best Actor is fine and appropriate, but also due-deference political. Anne Thompson knows this, of course.

Red-and-black checkerboard jackets have been de rigeur for rugged, clock-punching proletariat types over the last century, at least. Didn’t Fred MacMurray or Henry Fonda wear one in Trail of the Lonesome Pine (‘36)? I know Marlon Brando’s Terry Malloy strolled around the Hoboken docks with a jacket like this in On The Waterfront (‘54). Last night I saw this heirloom in a Rag & Bone display window in Georgetown. Whatever L.L. Bean may have charged in its mail-order catalogue 60 or 70 years ago, it’s a safe bet that Rag & Bone has hiked the price significantly.

What kind of Millennial idiot would shell out for this? I wouldn’t wear this muttonhead garment on a bet.

Sometime in early ’79 I worked as a manager or co-manager of the Carnegie Hall Cinema. It was such a fascinating and blessed place to work in that I didn’t mind being paid next to nothing. It was easily my second favorite job of my 20s, the first being a Checker Cab driver in Boston, which yielded intrigue and adventure on a daily basis..

My employer was the late Sid Geffen, the eccentric, moustachioed real estate hotshot who had launched a not-for-profit repertory cinema company (the Center for Public Cinema), and at the time was running both the Carnegie and Bleecker Street Cinemas.

10 and 2/3 years ago (or on 3.20.09) Variety‘s Chris Willman wrote a fascinating account of a confrontation between Bound for Glory‘s David Carradine, Ronny Cox and Haskell Wexler. It happened after a screening of Hal Ashby’s 1976 film at the Aero theatre.

Bound for Hell, or Glory, at the Cinematheque by Chris Willman:

Not since I saw Bill Irwin and Kathleen Turner go at each other in an excellent production of Who’s Afraid of Virginia Woolf? a couple of years ago have I experienced a night of live theater quite as riveting as the three-way cage match between David Carradine, Haskell Wexler and the audience the other night following an American Cinematheque screening.

What a nerve-wracking, weird and wonderful night this was. The following is going to be way more exhaustive than most of you will want. But for the few who really wanted to hear about the whole thing, by request, here goes…

If there’s anything that doesn’t exactly seem to scream “fireworks!,” it’d be a panel discussion about the 1976 Woody Guthrie biopic Bound for Glory, which at this date probably counts as one of the less remembered works of the late, great Hal Ashby. As much as I love Ashby, I’d never seen it, and I have a hard time forcing myself to watch slow-moving two-and-a-half hour movies unless I’ve committed myself to a seat in front of a big screen. So I just barely dragged myself out of the house for the 30-mile drive to the Aero. 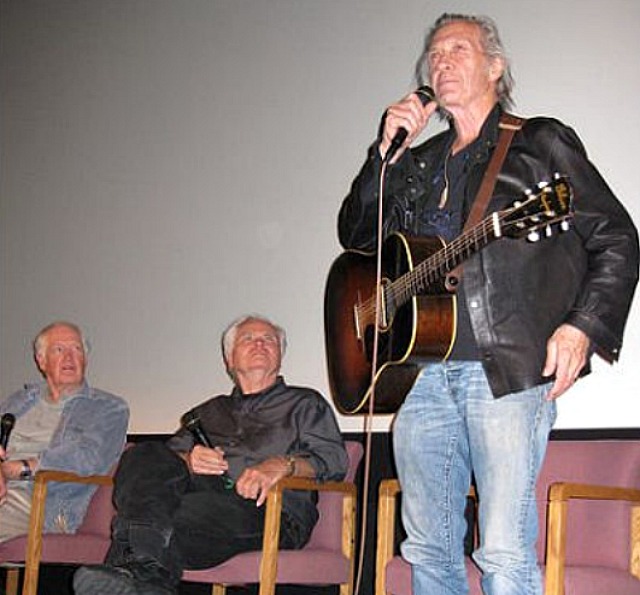 I knew there’d be a discussion afterward with Carradine, but my plan was to skip it and go from there to a late show of Watchmen in Westwood. I luckily decided otherwise. Imperfect as Glory is, it does a fantastic job of plunging you into the (previous) Depression, and it’s so utterly and engagingly human that I feel like washing its taste out of my mouth with a comic-book extravaganza would be opening myself up to eternal damnation. So I stayed for the discussion, and narrowly averted what might have been one of the great regrets of my life.

I should say that there has already been some weirdness during the screening itself. During a scene where a radio guy reminds Carradine’s Arlo Guthrie that he’s not allowed to sing any controversial or topical material on his program, somebody very loudly exclaims, “I hate guys like that!” It gets a big laugh from the audience. But soon the same guy is keeping up with a line of patter, which I can’t make out because he’s on the other side of the auditorium. As you’d expect in a repertory screening, very quickly there are cineastes yelling at the rube to shut the hell up, and some kind of verbal altercation seems to ensue for about a minute.

Of course, as soon as the lights come up, Carradine is walking down the aisle with his acoustic guitar, already going off on some kind of rant before he gets to the stage, and everyone realizes he was the one providing live commentary for his movie. (As the late noir character actor Lawrence Tierney once drunkenly did, in this same theater, in a night that is beloved in Cinematheque lore.) At this point I sense people in the audience feeling embarrassed to realize that The Star Of The Show had been shouted down like a common heckler, though some of these sympathies are about to diminish…

The screening is part of a “Kevin Thomas’ Favorite Films” series, hosted by the former (and occasionally still) L.A. Times film critic, who I knew back in my own Times days. I don’t know what Kevin has been like as a moderator on the other nights, but during the ensuing 70 or 75 chaotic minutes, he seems to go into shock and utters all of about 50 words. The first nine of them being “I understand Ronny Cox is in the audience tonight?” Indeed, Carradine’s costar has shown up just to see the film, and, so bidden, walks toward the stage — joining another surprise guest, Haskell Wexler, one of the half-dozen or so most revered living cinematographers, and an Oscar winner for the movie. Carradine and Cox warmly embrace, the former enthusing about how he couldn’t have gotten through without the latter as his partner, and the lovefest begins!

Or the monologue, actually. For the first 20 minutes or so, Carradine does 98% of the talking — hell, maybe 99% — and it’s entertaining as all-get-out, in a had-too-many-highballs-before-dinner kind of way. As the star goes on with his anecdotes, Cox is probably thinking he could have stayed in his original seat, and Wexler keeps slinking further down in his chair, as those of us who know this particular d.p. does not suffer fools gladly wonder what kind of storm clouds might be forming in his head.

In the wake of Martin Scorsese and Francis Coppola‘s disparaging of the Marvel and D.C. empires, austere Bavarian beardo Michael Haneke professing chumminess with Zack Snyder…I’m speechless. That or Haneke is being droll. 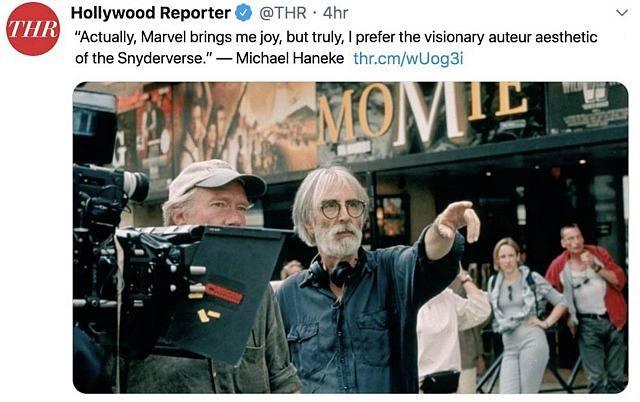 Does mastery of The Force allow you to fly? Not the last time I checked. A Jedi master can move things by telekinesis and control the minds of dumb droids, but he/she can’t defy the laws of basic physics. Daisy Ridley‘s Rey therefore cannot make the kind of leap that she does in the new Rise of Skywalker trailer. I’m sorry but this is bullshit.

I’m also getting a little tired of watching Rey wear that clenched and adrenalized expression as she faces Adam Driver‘s Kylo Ren in a light-sabre battle….again.

I’m also looking at Driver and thinking, “Man, you just got divorced, you’ve sung a Stephen Sondheim song, you’re finally begun to settle into your NYC-to-LA and back routine, you’ve helped Leos Carax find his dog in Brussels, and now you’re thrown your engines into reverse and gone back to that tired old prince of evil routine? You’re contractually obligated to finish things off, I get that, but still…”

I feel the same way about The Rise of Skywalker as I did about Matrix Revolutions a month or two before it opened.

I’m impressed, however, by those heaving CG seas.