I somehow missed this. Fairly blatant. I’m not necessarily presuming this is why Taron Egerton took the Golden Globe for Best Actor, Comedy/Musical instead of Eddie Murphy, but c’mon… 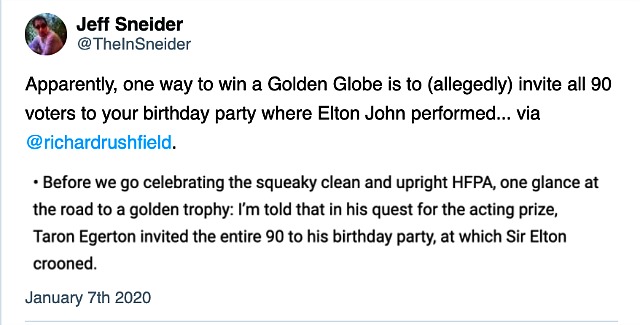 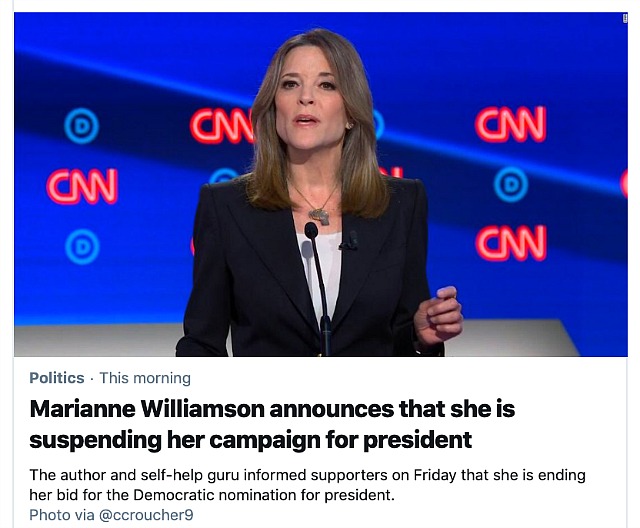 Respect and regrets over the death of director Ivan Passer, whom I always admired but was never a huge fan of.

To be perfectly honest, the only Passer film that I felt a genuinely vital current from was Born To Win (’71), the George Segal junkie movie that was set mostly in the Times Square area. It was Passer’s second directing effort — the first in this country. The costars were Karen Black, Paula Prentiss, Hector Elizondo, Jay Fletcher and Robert De Niro.

Passer also co-wrote Loves of a Blonde and The Fireman’s Ball, the Milos Forman-directed Czech films of the late ’60s.

From producer Victoria Wisdom: “Manhattan, late ’80s. I was waiting for a meeting with infamous agent Sam Cohn, who still had Meryl Streep, Woody Allen and Mike Nichols as clients then. And everyone was afraid of him.

“Nearby was a shelf full of scripts. One caught my eye. Written by Michelangelo Antonioni and, yes, Buck Henry.

When Sam walked in, I asked if I could read it and he said “take it”, mumbling something like “why would you want to read that?”

I asked Sam how in the world Buck Henry (The Graduate, Catch–22) had come to collaborate with Michelangelo Antonioni (L’Avventura, Blow–Up). He pretended not to hear the question.

A decade later I was at a film-premiere reception in Los Angeles. And there across the room was Buck Henry. I asked him the question I’d been wanting to ask for years: Please tell me how you came to write a script with Antonioni??

Buck’s response: “It was August in New York. Hot and humid. I was sitting in my apartment and I was broke. Even my air conditioning wasn’t working. The phone rang. My agent was calling. Sam never called. Sam was brief. ‘How would you like to go to Italy for a month? First class. Michelangelo Antonioni needs someone to polish the dialogue of his new screenplay. (His English isn’t so hot.) And you’ll be staying at his estate. It pays….”

The next morning Buck was on a plane to Rome. A chauffeur-driven limo picked him up at the airport and drove him to the hills outside of Rome where Antonioni lived. He saw the palazzo high in the hills long before they got there. Like a Renaissance palace. The driveway was long and winding and lined with cypress trees.

“Uniformed servants met him at the door, grabbed his bags, showed him to his room, which was at the top of a turret with a 360 view of the rolling countryside. Buck was thinking ‘Hallelujah!’

An assistant knocked at the door, holding the screenplay. “Signore Antonioni would like Mr. Henry to read the script tonight to be prepared for a breakfast meeting tomorrow morning,” etc.

The next day Buck was escorted into a stunning al fresco garden dining room. A translator was already there. Buck was seated before Signore Antonioni entered the room.

Antonioni explained through the translator that he wanted the script, which had been translated into English, to have a more natural and accessible feel for the spoken language. Buck agreed. Antonioni stood up. The translator followed. Meeting over.

Buck went back to his room and began to type. At the end of the day, the assistant knocked at the door and requested the finished pages as Signore Antonioni wished to read them overnight. Buck handed them over.

A week went by. One day the assistant knocked at the door and said the chauffeur was waiting to take Buck to the airport.

Buck asked “Is Signore Antonioni unhappy? Can I speak with him? “ The assistant said, “I’ve only been asked to let you know that the chauffeur is here.”

So Buck packed his bags. And the limo drove him back down the long driveway to the airport.

When he got back to Manhattan, he called Sam. “How did it go?”, asked Sam. Buck replied, “I’ve no idea.” [HE interjection: Bullshit.] And Sam said, “Well, anyway, they paid for the full month.” And Buck said, “Well, at least now I can buy a new air conditioner.”

The screenplay, which I’d read so many years before, was a story about a young man who falls madly in love with a woman about to enter a convent. It became part of an anthology of four shorts compiled into a film.

It was Antonioni’s last feature.

HE has frequently condemned people who throw their heads back and laugh loudly in restaurants and bars. I’ve also frowned upon the conversational use of the words “genius”, “oh my God” and, most recently, “amazing.” Today’s prohibition is about the expression “you have no idea.”

People who say what they don’t actually mean are utterly worthless. On top of which Samuel L. Jackson has said “you have no idea” in too many films. So from here on and forevermore, nobody can say this four-letter phrase ever again. Well, they can but…

The survivors are Juliet Huddy, Rudi Bakhtiar and Julie Zann.

The most surprising moment comes at 16:20 when Kelly is asked if she ever submitted. “So I was asked to do the spin,” she says, “and God help me, I did it.”

Kelly explains: “I remember feeling like ‘I put myself through school, I was offered a partnership at Jones Day, one of the best law firms in the world, I argued before federal courts of appeal all over the nation, I came here uncovering the United States Supreme Court, I graduated with honors from all of my programs, and now he wants me to twirl.’ And I did it. (Emotional pause.) If you don’t get how demeaning that is, I can’t help you. In retrospect, I’d give anything if I had said no.”