As I began watching last night’s debate, I was nursing an idea that Michael Bloomberg, imperfect and brusquely billionaire-ish as he is, might begin to save the Democrats from nominating Bernie Sanders next summer and thereby going down to another terrible defeat. And now, surprisingly, I’m thinking Elizabeth Warren could possibly save us from that.

I know her levels of support aren’t anywhere near where they need to be among bumblefucks and that some felt she was too aggressive in her attacks on Bloomberg, but anyone would be better than Bernie…please. As much as I’m down with Bernie’s general approach and his overall character and decency, I can’t shake my primal fear about what will happen when he goes up against Trump. He’s somewhere between George McGovern and Jeremy Corbyn. God help us all.

HE to Parasite-Dissing Trump: “You’ve made me look bad by speaking ill of Parasite‘s Best Picture win…thanks. I don’t want to be on your side of any issue. It’s a terrible look. Besides you haven’t even seen it, for God’s sake — you just resent the idea of a South Korean film winning the top prize because it strikes you as un-American. But I guess I should be grateful you were speaking from ignorance. If you had seen it and complained that it was nonsensical for the drunken family of con artists to let the fired maid into the home during that rainstorm…if you’d said that I’d be in real trouble right now.” 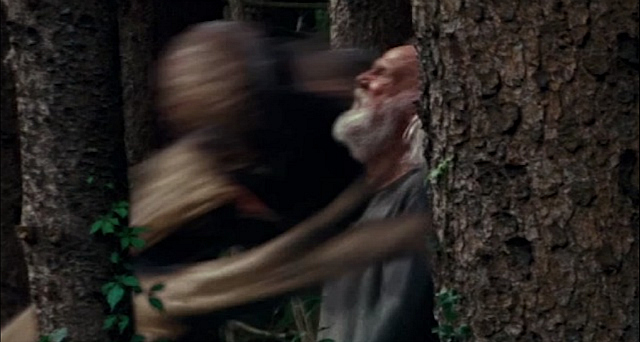 The night before last I saw William Nicholson‘s Hope Gap (Roadside, 3.6), an intelligent, fully felt, nicely layered domestic drama about the sad end of a nearly 30-year marriage in a small coastal town in England.

Annette Bening and Bill Nighy play the 60ish couple, and the gist is that they don’t part by mutual agreement — Nighy has fallen in love with a local woman (a somewhat younger widow) and proceeds to lower the boom on Bening over tea.

Both are excellent in a carefully proportioned and ruefully miserable sort of way, Bening in particular with her nicely vowelled British accent.

The story is based upon the breakup of Nicholson’s own parents when he was somewhere in his 20s, and how he found himself in the position of the anguished counselor and referee. Nicholson is played by Josh O’Connor (The Crown), who’s fully up to the level of his costars.

I was pleasantly surprised by how much the film stirred and engaged me, especially given the sappy-sounding title. Hope Gap sounds like some kind of contact-high film — a spirited feel-gooder about things working out for the better. That’s not what this is.

A much, much better title is The Retreat From Moscow, which is what Nicholson called the play version when it opened in late ’99 at the Chichester Festival Theatre. (Four years later it opened at Broadway’s Booth Theatre with John Lithgow, Eileen Atkins and Ben Chaplin in the lead roles.) Why it took Nicholson 17 or 18 years to film it is anyone’s guess.

Why was it called The Retreat From Moscow? Because it alludes to acts of cruelty that allow the living to survive. In 1812 Napoleon’s once-huge army was decimated by the Russian winter along with a lack of food and sufficient clothing — only 27,000 troops survived. Those who fell by the roadside were stripped by their comrades and left to die naked in the snow, and drivers of wagons carrying the French wounded sped up over bumpy road in hopes that they might fall off.

By the same token Nighy’s Edward sits down at the kitchen table and tells Bening’s Grace that they’re done — that he intends to move out because he’s fallen in love with Sally Roger‘s Angela. By any measure this is a brusque and hurtful move, but it also puts an end to a dry, unsatisfying union while allowing for a measure of newfound happiness between Edward and Angela.

When Grace angrily strolls into Edward and Angela’s home in Act Three, she asks the younger woman what she thought she was doing when she and Edward began to become involved. Angela replies, “I think I thought there were three unhappy people, and now there’s only one.” Whoa.

Some critics have complained that Hope Gap feels too “written”, too much like a filmed play. Except the writing is quite good. All the angles and regrets and after-thoughts emerge in just the right way. I suppose some will find it a bit too solemn and dreary, but when the dialogue is this well-honed and the acting is this affecting, I don’t see the problem.

There would appear to be sharply differing viewpoints among the jurors (five women, seven men) considering the Harvey Weinstein rape trial. They’ve been Twelve Angry Men-ning it for three days and will dive in again tomorrow morning (i.e., Friday). Late today the jurors requested to re-examine “the cross-examination and everything afterwords in the testimony of Annabella Sciorra,” according to Variety‘s Elizabeth Wagmeister and Mackenzie Nichols.

What does this smell like? Some kind of mixed verdict, right? Or even a hung jury. I doubt Harvey will skate, but imagine the reaction if he does.

Westworld‘s third season is nearly upon us. An eight-episode endurance test that begins on 3.15.20, it will presumably deliver the same infuriating mixture of bullshit brain-teasing, dick-diddling, plotzing and puzzleboxing.

Around the 28-second mark of the Westworld 3 trailer we hear a woman’s voice say “you are woke“…thud.

Last summer showrunners Jonathan Nolan and Lisa Joy told Entertainment Weekly that season 3 would have a more comprehensible story line…really? “Season 3 is a little less of a guessing game and more of an experience with the hosts finally getting to meet their makers,” Nolan said. Doubt it!

Posted on 4.27.18: “That feeling of being fiddled and diddled without end, of several storylines unfolding, expanding and loop-dee-looping for no purpose than to keep unfolding, expanding and loop-dee-looping…is such that I’m determined to hate all further permutations of Westworld without watching it. I don’t care how that sounds or what it implies. Come hell or high water, I will not go there.”

Same goes for season #3. I’m not touching it with a ten-foot pole. Especially now that Aaron “Tennisballhead” Paul is a new major character. Worse, one named Caleb.

Boilerplate: “Taking place immediately after the events of the second season, Westworld escapee Dolores (Evan Rachel Wood) develops a relationship with Caleb (Paul) in neo-Los Angeles, and learns how robots are treated in the real world. Meanwhile, Maeve (Thandie Newton) finds herself in another Delos park, this one with a World War II theme and set in Fascist Italy.”

From a 4.20.18 review by CNN’s Brian Lowry: “The first half of [season #2] repeats the show’s more impenetrable drawbacks — playing three-dimensional chess, while spending too much time sadistically blowing away pawns. The result is a show that’s easier to admire than consistently like.

“The push and pull of Westworld is that it grapples with deep intellectual conundrums while reveling in a kind of numbing pageant of death and destruction. Where the latter is organic to the world of HBO’s other huge genre hit, Game of Thrones, it doesn’t always feel integral to the story here, but rather a means of killing (and killing and killing) time.”