Early this evening I risked exposure to COVID-19 by going to a mediocre film (The Hunt). I Ubered to the AMC Barton Creek, which cost around $15. There was a fair amount of traffic on the way — many Austinites were risking death like myself. The theatre is inside a typically lavish mall, and I didn’t see a single person there over the age of 30. No middle-aged or white-haired couples, no little kids — just 20somethings.

At best the movie is tolerably blah. Too much in the way of kidding and arch behavior. Bite is smaller than bark.

Plus I hated watching it with tight plastic surgical gloves on my hands and that stupid N95 mask around my neck. What a ghastly thing it is to be afraid of infections and surfaces in everyday life, to be afraid of death and disease at every turn. I washed my face and hands four times — once after the screening, twice while wandering around Austin, again at a gas station on South Congress.

I took a city bus to downtown Austin, and was a bit surprised to discover how different it looks and feels compared to six years ago, when I was last here. Many big new buildings, a little more corporate, a bit less in the way of native personality. 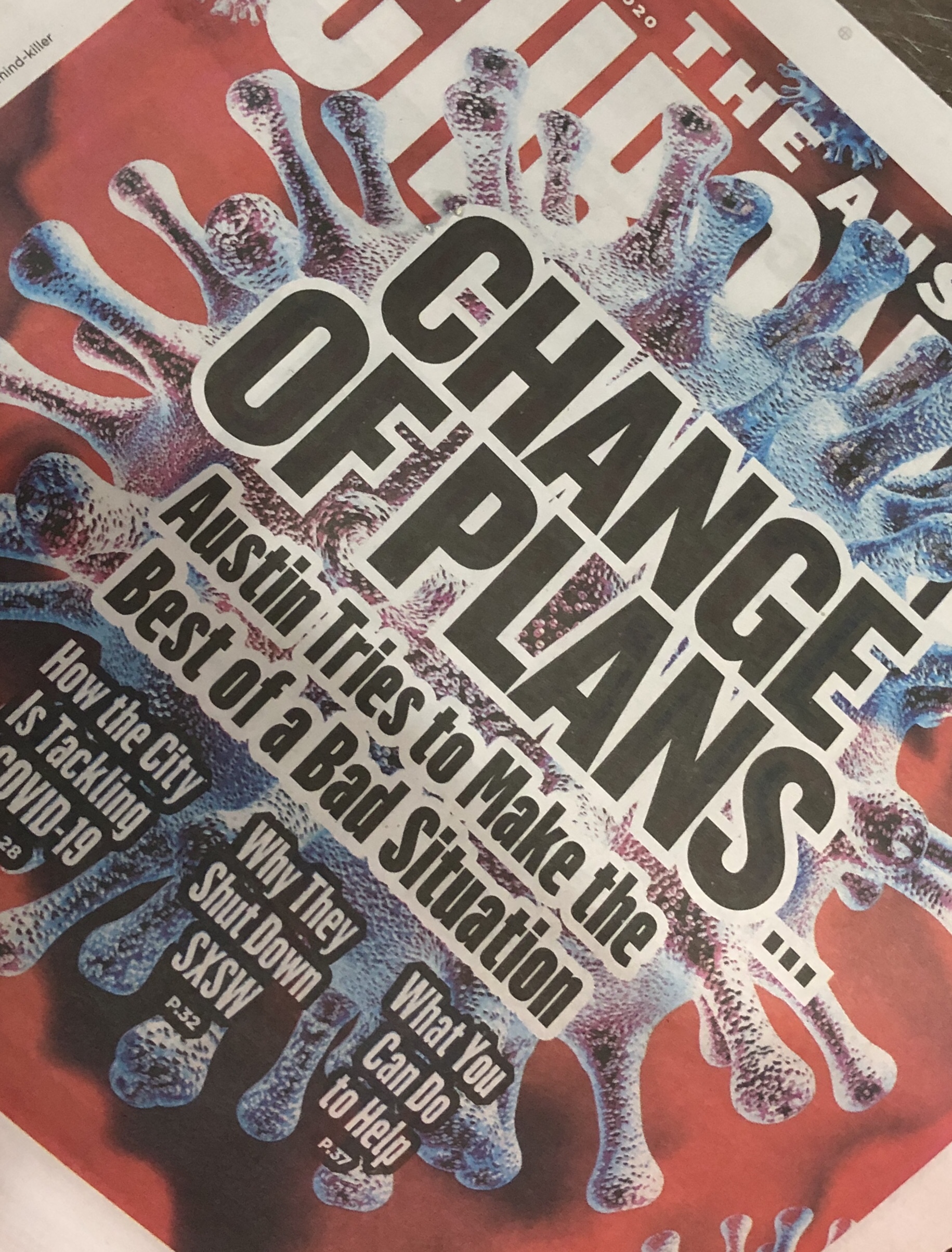 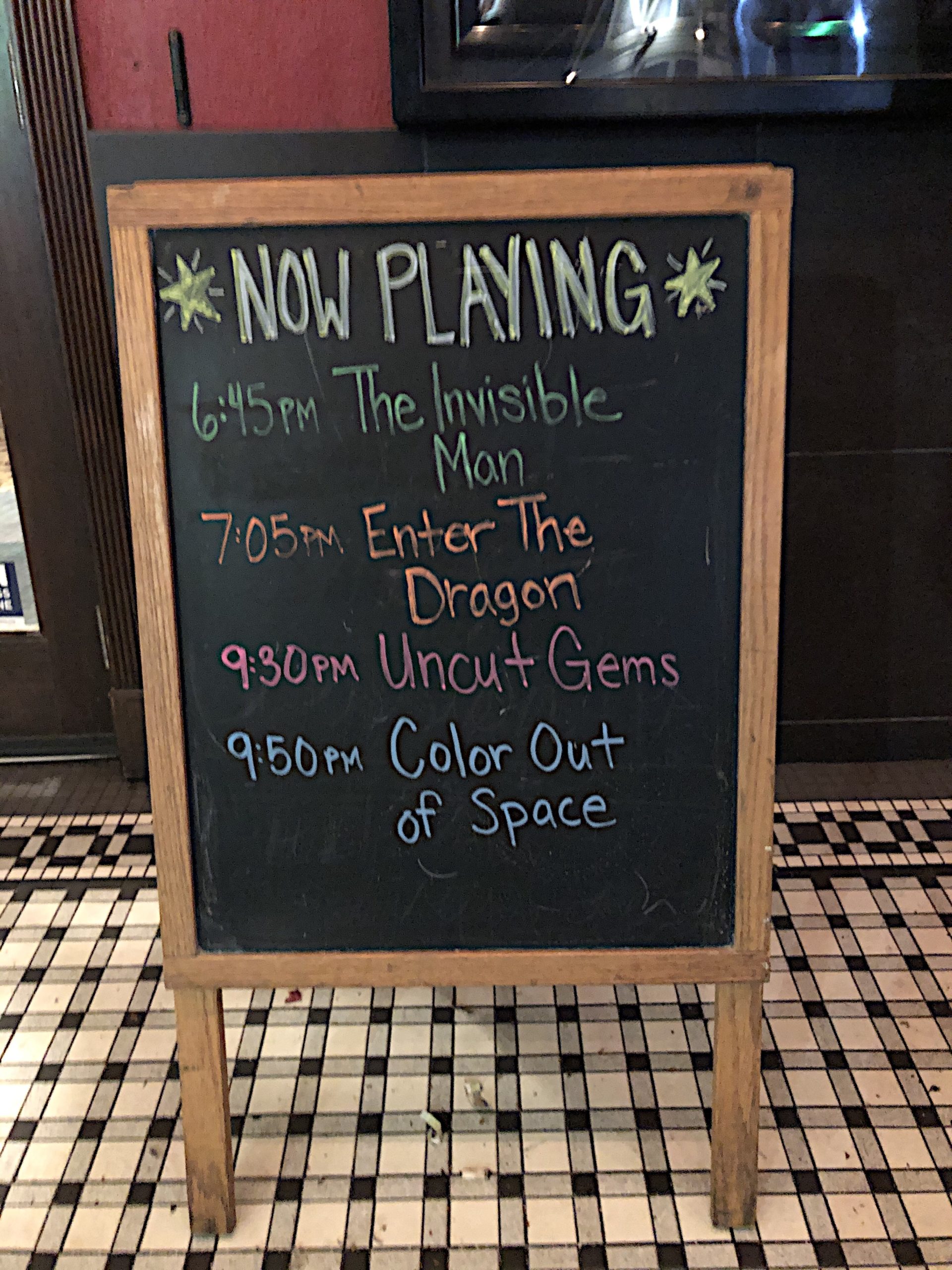 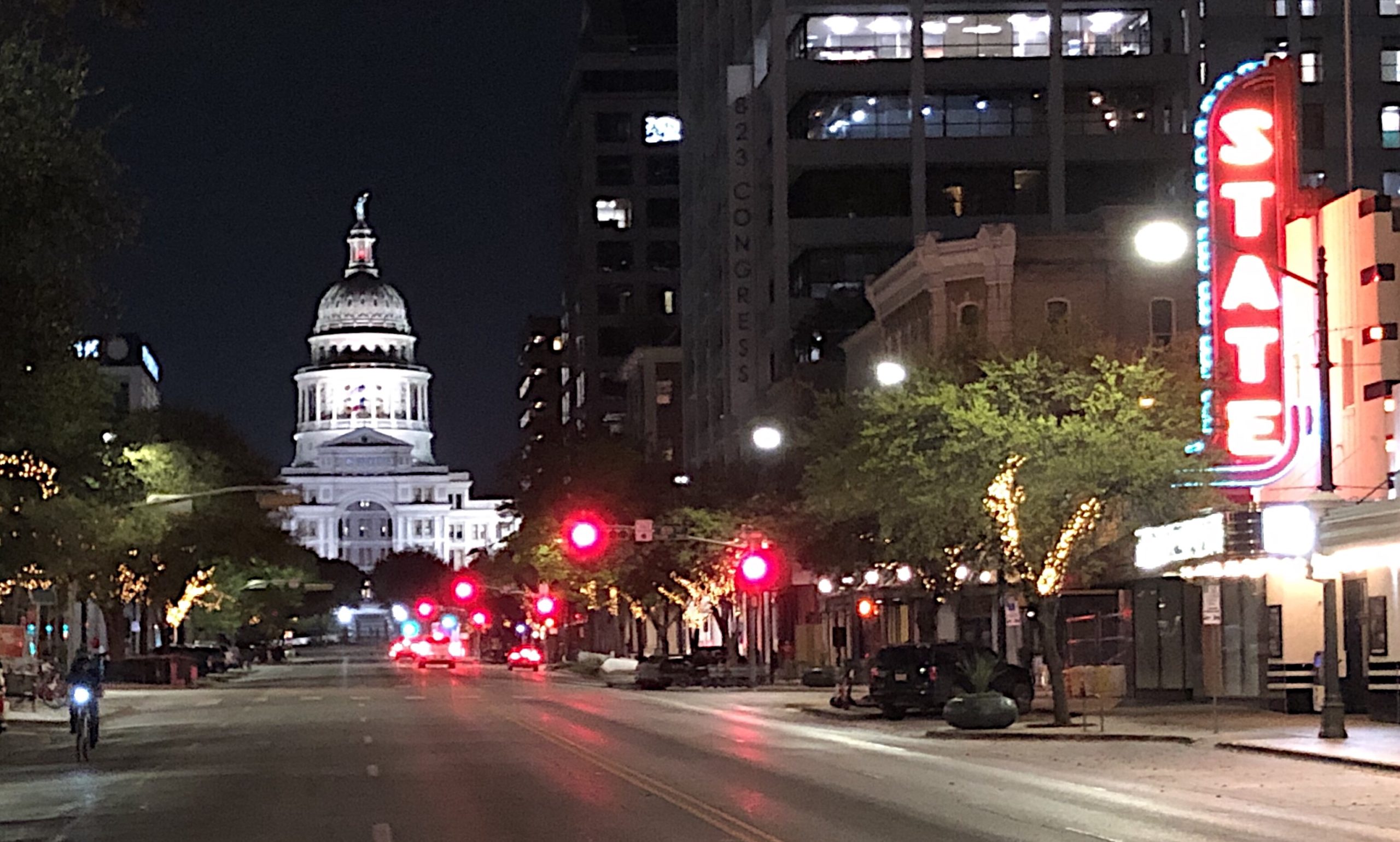 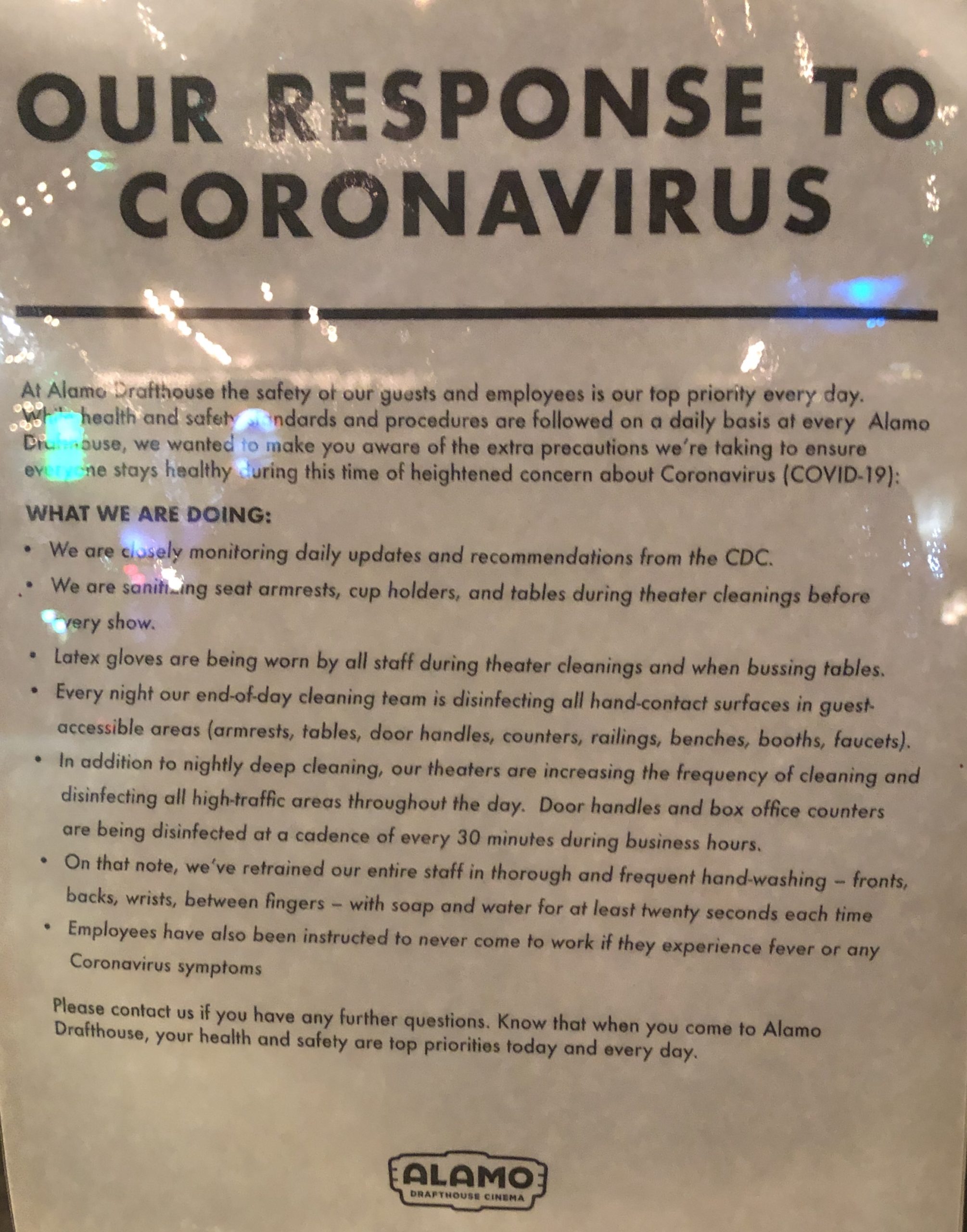 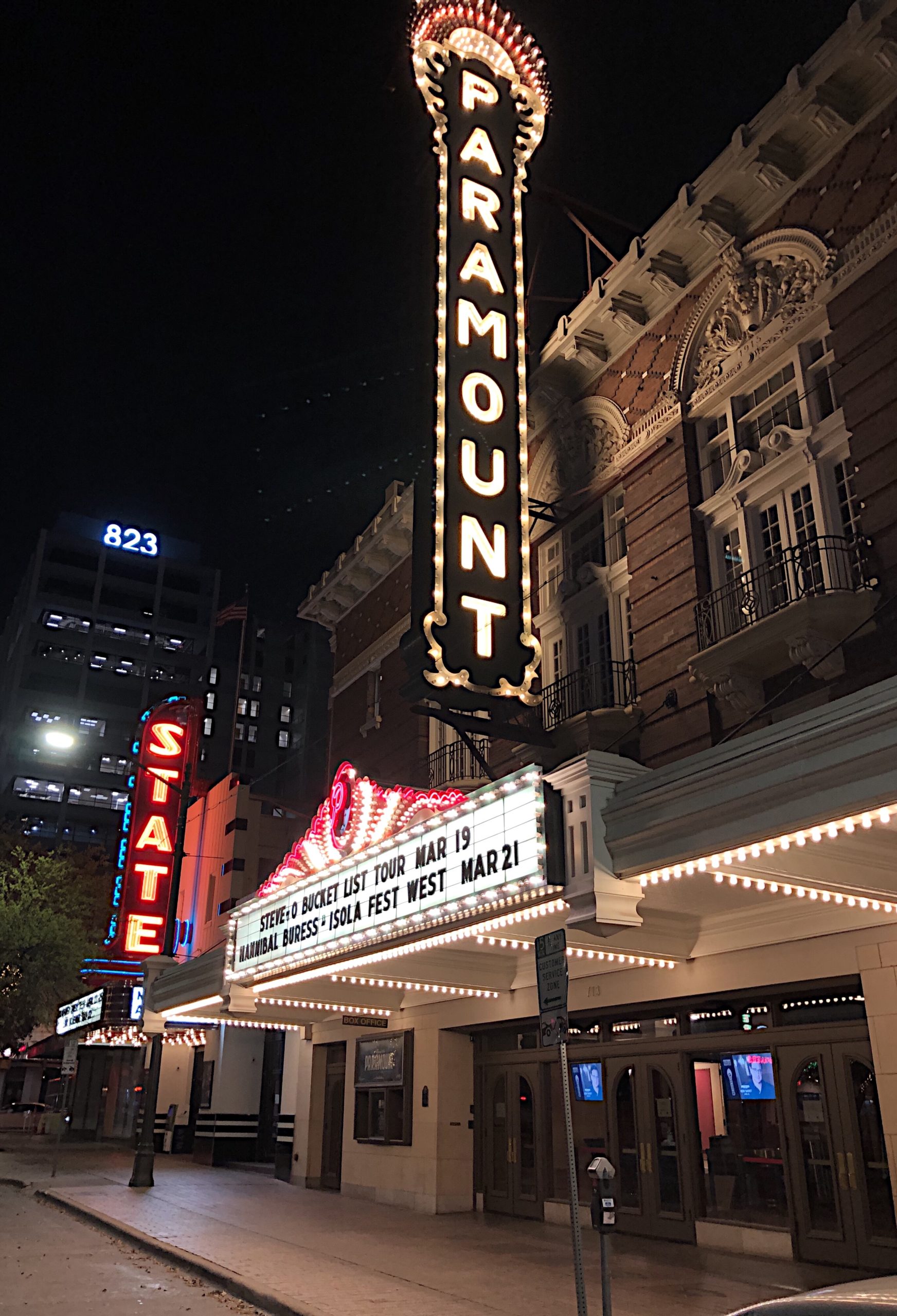 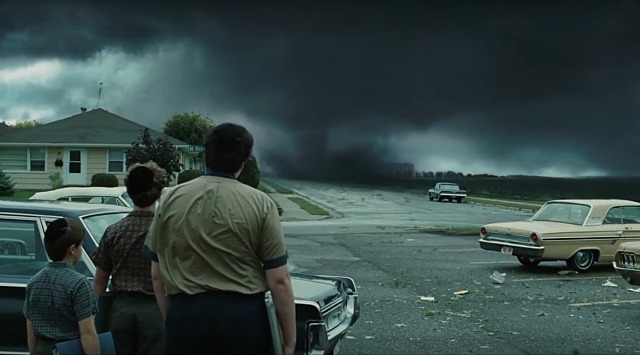 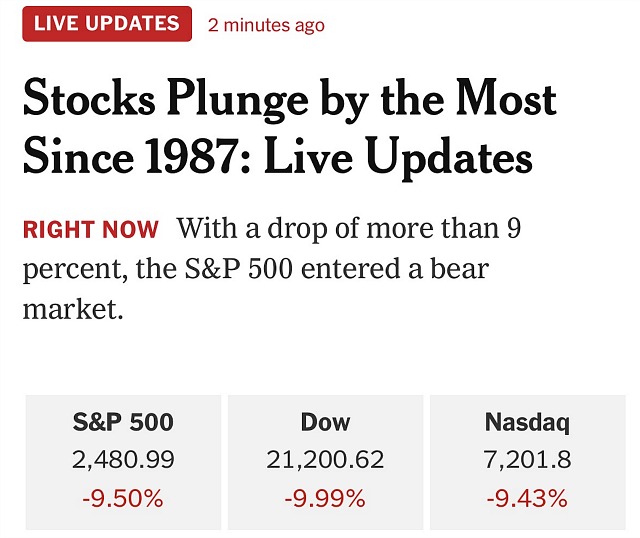 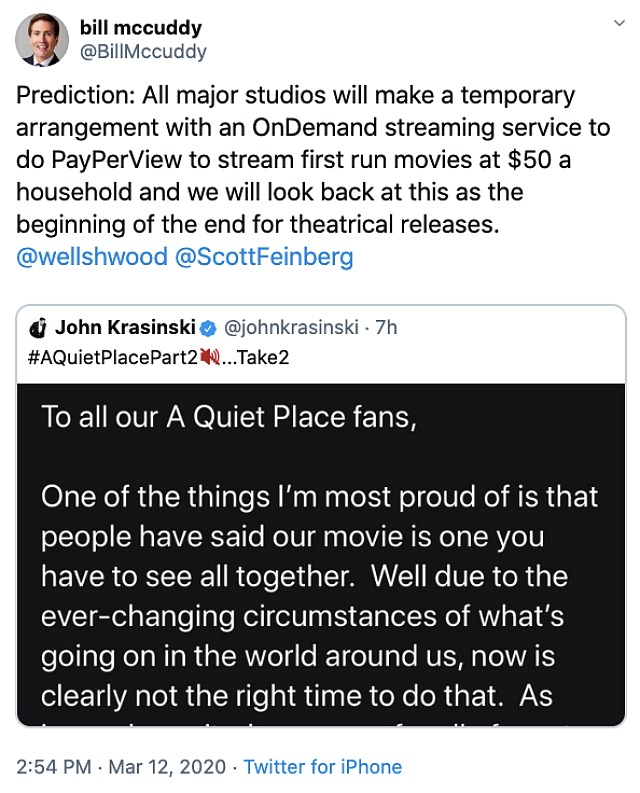 We’re all living in a movie. Each and every sizable congregational activity — conventions, concerts, sporting events, Broadway shows — is being cancelled as we speak. The 3.20 opening of A Quiet Place 2 has been scrubbed, and I’m assuming it’s just a matter of time before regular movie theatres begin to close. Press screenings of new films will cease also — films that decide to open regardless will only offer online screeners. Exhibitors had been hurting before this — now it’s even worse for them. Poor fellows.

Pretty much the entire country is going under closed-door quarantine for the next couple of weeks, and maybe longer. Only the bold and the reckless will be out and about. Amazon, Netflix and Disney+ ratings and sign-ups will soar, of course.

I am nonetheless planning to attend a 7 pm screening of The Hunt at the AMC Barton Creek Square 14 (2901 So. Capital of Texas Highway, Austin, TX 78746). I have my COVID-19 gear — N95 face masks, plastic surgical gloves — along with the black cowboy hat and tinted distance glasses. 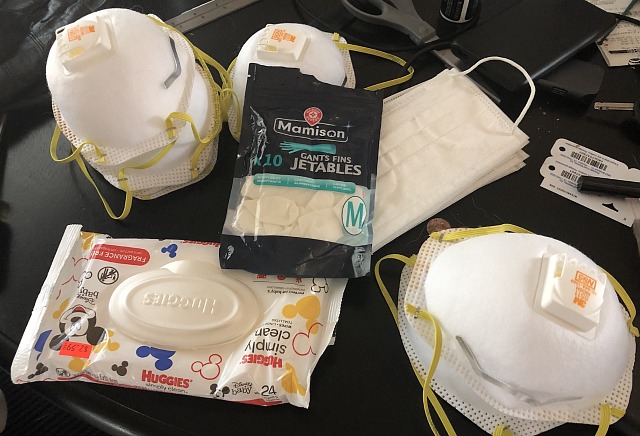 It’s conceivable that The Beast, a longtime germophobe, wasn’t infected with COVD-19 after coming into contact last weekend with President Jair Bolsonaro’s communications chief Fabio Wajngarten, who has since tested positive. If Trump or Pence are infected they’ll never admit it, of course. But as I said two or three days ago, if the Gods have a dark sense of humor… 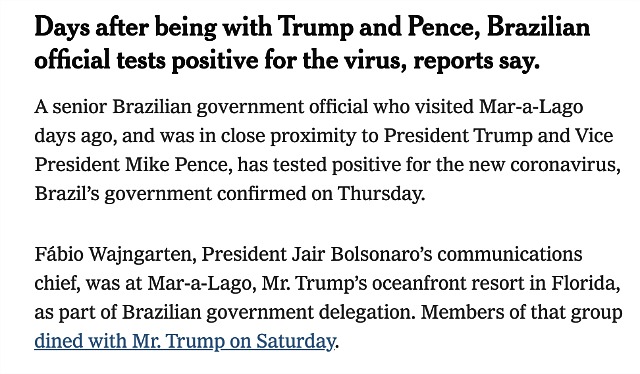 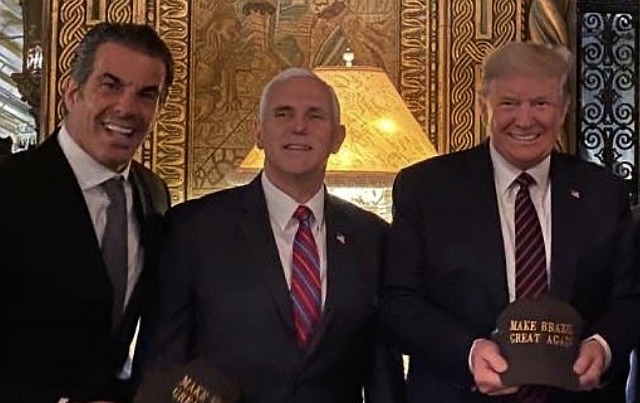 Restored, 60 frames-per-second HD, color tinting, sound-augmented. Posted ten days ago. This kind of simulated realism of times and cultures past is a relatively new thing, and quite the unfettered window. Imagine Owen Wilson‘s Midnight in Paris character sampling 1920s Paris in this fashion, with most of the ancient artifacts eliminated. As I mentioned the other day, I’d really like a chance to re-savor classic Hollywood films at 60 fps. I know the purist argument against this, but where would be the harm to simply make 60 fps versions available?

Last month West Side Story lyricist Stephen Sondheim told 60 Minutes that he’s never liked “I Feel Pretty,” and is therefore totally fine with the number being dropped from the current Broadway show.

“I Feel Pretty” is probably my least favorite West Side Story song — to me it feels overly jubilant and forced — but I’ve never minded Sondheim’s engagingly witty lyrics. This is precisely what Sondheim dislikes. Decades back he told Diane Sawyer that Maria, a Puerto Rican “street” girl, would never say “it’s alarming how charming I feel.” Sondheim wrote this lyric, he said, because he was young and showing off. Maria, he maintained, “should speak in street poetry, not in literary poetry.”

There is obviously sound artistic reasoning behind this viewpoint. It’s dishonest and phony for a young, minimally educated Puerto Rican immigrant to express herself in the lyrical manner of 27 year-old Sondheim, a sharp, well-educated Jewish sophisticate who grew up in the San Remo. I get it.

But I’ve never minded the affectation because I vastly prefer to live and reflect in the mind of someone like Sondheim, because he’s clever and urbane knows a thing or two. There’s an artful way to write dialogue (and lyrics) for under-educated characters with somewhat limited vocabularies, and it’s certainly more authentic to do this. But I’ve never minded and in fact have always enjoyed the fantasy notion that characters who don’t know much could somehow speak from a wise and cultured perspective.

What I’m saying, I guess, is that given a choice between hanging with (a) an unusually perceptive and eloquent character who doesn’t talk like he/she would in real life and (b) an inarticulate, primitive-minded boob, I prefer the former. Happily. Because I’ve never liked being stuck in the minds of people who don’t have much of a clue.

In On The Waterfront Marlon Brando‘s Terry Malloy is a rugged, simple-minded fellow with a less-than-worldly of things, but screenwriter Budd Schulberg had him speak with a certain abbreviated, side-angle, world-weary eloquence that really works in certain scenes. When Malloy begs Eva Marie Saint‘s Edie not to leave the saloon in which they’ve been sitting and talking, he says “please don’t…I got my whole life to drink.” That’s an Iceman Cometh line, and hardly one that a lunky longshoreman and an ex-boxer would cough up. But Schulberg would, and it’s beautiful moment despite the unreality.

COVID-19 is believed to have originated with dead bat (or some other exotic animal) cuisine in an open-air market in Wuhan, China.

The MEV-1 virus in Steven Soderbergh’s Contagion also originated in China, from a virulent bat. The bat drops an infectious piece of banana into a pig sty; the banana slice is then eaten by a pig. Newly infected, the pig is taken to market and slaughtered, and a chef who’s prepared the diseased pig for gourmet customers shakes hands with Gwyneth Paltrow, the first internationally travelling person to be infected) in a high-end restaurant in China. Remember? It’s a flashback at the very end.