In a 3.18 AP interview with Jake Coyle, legendary director Brian DePalma was asked to name his peak career period.

De Palma: “In my mid 50s [actually his early to mid 50s], doing Carlito’s Way and then Mission: Impossible. It doesn’t get much better than that. You have all the power and tools at your disposal. When you have the Hollywood system working for you, you can do some remarkable things.”

I’m sorry but DePalma is wrong. He was a truly exciting, must-watch director from the late ’60s to mid ’70s (Greetings, The Phantom of the Paradise, Sisters, Carrie), and an exasperating, occasionally intriguing director from the late ’70s to late ’80s (Dressed To Kill, Scarface, The Untouchables). His ’90s films certainly don’t match those of the previous decade, and his ’70s output, as noted, reigned supreme.

As I noted five years ago, De Palma is “one of the most committed and relentless enemies of logic of all time. For a great director he has an astonishing allegiance to nonsensical plotting and dialogue that would choke a horse. I tried to re-watch Blow Out last year — I couldn’t stand it, turned it off. The Fury drove me crazy when I first saw it, although I love the ending. I found much of Dressed To Kill bothersome when it first came out 35 years ago, and to be honest I haven’t watched it since.”

On one hand we have a temperamental sociopathic president mishandling the pandemic to a mind-boggling degree, and an upcoming presidential election in which the aging but decent-hearted Joe Biden may prevail, God willing. On the other hand we have former Biden aide Tara Reade claiming that Biden sexually assaulted her 27 years ago (“kissed her and penetrated her with his fingers without her consent”) and that he became annoyed and reacted with hostility when she rebuffed him.

If it happened, it happened. But why talk about it now? Long suppressed trauma needs closure and healing — we all understand this — but has Reade considered the possibility that what she may or may not have endured during the first year of the Clinton administration isn’t quite as important as Donald Trump being unseated next November? Biden may or may not be guilty but he hasn’t been similarly accused by anyone else, or not to my knowledge.

Reade was presumably in her early to mid 20s in ’93 and is now 50 or a bit older. She said yesterday she’s “a lifelong Democrat” who voted for Barack Obama twice as well as for Hillary Clinton. She didn’t come forward about Biden earlier because she had a young daughter at the time. But she’s out there with her story now, and in so doing giving the Trump campaign a weapon.

Again — who would decide that settling a score or attaining closure about an undoubtedly traumatic episode (if in fact it actually happened, and I’m not trying to dismiss or minimize anything or anyone if it did)…who would conclude that this is more important than the fate of an entire nation?

And by the way, what was that Russian thing she wrote a couple of years ago? **

The HE commenters who recently told me to “man up” because of my coronavirus melancholia are hereby advised to rethink their stinkweed views.

“We’re a society that always wants quick fixes, so we want this to be over quickly. But it’s been [recently] sinking into us that next week or next month, our world’s not gonna go back to normal. And in fact, that our normal world is probably gone forever.

“Grief is [almost always] about change that we didn’t want. We talk now about ‘remember what airports were like before 9/11?’ I think one day we’re going to have discussions about ‘do you remember what life was like before the pandemic? Do you remember how we used to shake hands?’ I think we’re seeing the loss of our world, and we are feeling the grief that goes along with that.

“This is grief. This is loss. The world that we knew has died, and we’re feeling the sadness. And our emotions need to be felt. Suppressing them isn’t going to work.”

In order to complete my feelings of numbness and despair, I need to watch a Netflix true-crime series about a crew of scurvy redneck eccentrics living on an outdoor big-cat zoo in Bumblefuck, Oklahoma.

Flamboyantly toothless lowlifes and a murder-for-hire plot that gradually takes precedence, and the poor, sad, eye-rolling tigers who have to endure their company because they have no choice. God, how I despise hinterland low-lifes and their appalling lack of taste in everything, clothing and hairstyles in particular.

A trailer for the forthcoming Defending Jacob is semi-encouraging, at least in terms of Mark Bomback‘s dialogue and the cast (Chris Evans, Michelle Dockery, Jaeden Martell, Cherry Jones, Pablo Schreiber, J. K. Simmons) and the direction by Morten Tyldum (The Imitation Game). It’s based on a 2012 crime-drama novel by William Landay.

But the marketing slogan — “family is unconditional” — is not compelling. Some kind of evil strain has infected American culture over the last decade or two. The random shootings in schools and other public places…we can all sense that society is on some kind of permanent tilt. So right off the top a teenager accused of murder is not treated with denial or disbelief.

Plus there’s a credibility issue. If the teenage son of an assistant district attorney (Evans) is credibly accused of murder, wouldn’t the first order of business be for the assistant d.a. to recuse himself? Wouldn’t his seniors insist? Skim the novel’s plot and tell me if you want to watch this thing.

A Connecticut friend who works for a respected, well-established auto mechanic shop told me yesterday that many regular clients have left Fairfield County for the presumably safer environs of rural Vermont, New Hampshire and Maine. I don’t blame them. To go by the latest N.Y. Times chart, the New York tristate area is a coronavirus hell hole. Certainly compared to Los Angeles. 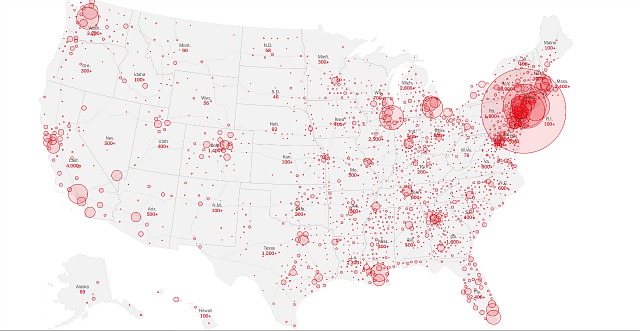 The Contagion cast has taped some coronavirus PSAs. Kate Winslet, Jennifer Ehle and Larry Fishburne look fine, but what’s up with Matt Damon? I would have tidied up a bit. Visual symbolism and all that.

In times of crisis, American presidents have always stepped up to meet the moment. But all we've gotten from Donald Trump are lies, excuses, and scapegoats.

Trump has failed our country at a time when we need him most. pic.twitter.com/d2vxUHGiH0