Hollywood Elsewhere’s official position is that Bicycle Thieves, the original Italian title of Vittorio De Sica’s The Bicycle Thief, which is what everyone called it during the entire second half of the 20th Century, should be cancelled.

The plural title has been used by Criterion acolytes for the last decade or so, but HE has always been against this. The title should be phrased in the singular.

I’m mentioning this because earlier today Indiewire‘s Eric Kohn posted a riff about De Sica’s neorealist classic, and in the second sentence stated that it was mislabeled “for years” as The Bicycle Thief. It was actually “mislabeled” that way for decades, and for good reason. Wanna hear the reason? The Bicycle Thief is a much better title. 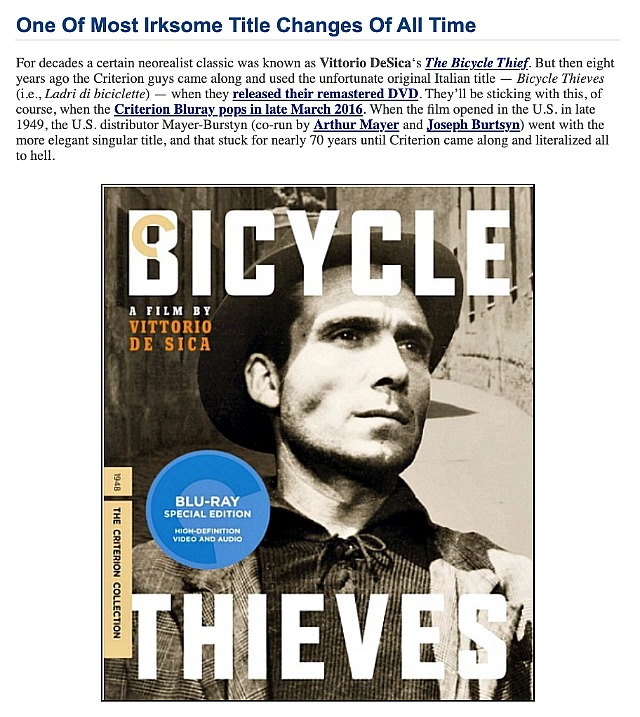 “The Bicycle Thief is the title of a poem. Bicycle Thieves is a phrase in a police report (i.e., rapporto della polizia).

“DeSica’s post-war drama is about a poor, struggling husband-father (Lamberto Maggiorani) who becomes desperate when a bicycle he needs for a new job has been stolen. His young son is played by Enzo Staiola. Most of the film is about Maggiorani’s unsuccessful attempt to find the stolen vehicle. It climaxes when, at wit’s end and desperate to hold onto his job, he steals someone else’s bike, and is quickly seized by authorities.

“Thus (and be warned, what follows is one of the most groan-worthy observations ever made by a reputable film critic in world history) the alternative U.S. title is ‘misleading’, in the view of The Observer‘s Philip French, because ‘the desperate hero eventually becomes himself a bicycle thief.’

“Good God, man! The singular title is far more intriguing because it allows the viewer to decide if it refers to thief #1 or thief #2. (The presumption during the first 90% is that the title refers to the former; the heartbreaking finale suggests the latter.). By not being precise it suggests that the term ‘bicycle thief’ may refer to anyone who is poor and hungry and driven to criminality out of desperation — it universalizes the singular. And the use of the plural ‘thieves,’ of course, tells the first-time viewer to expect a second felony to punctuate the story sooner or later, thereby diluting the effect when it happens.

Earlier today Ansel Elgort posted a nude photo to solicit donations for COVID-19 relief. The shot of the West Side Story star standing under an outdoor shower doesn’t reveal shlongola, with the 26-year-old actor’s right hand providing a certain modesty. The pic is captioned “OnlyFans LINK IN BIO,” referring to the subscription-based website. But a click-through takes seekers to a GoFundMe page for Brooklyn For Life!, which is about delivering meals to Brooklyn hospital workers tending to COVID sufferers. 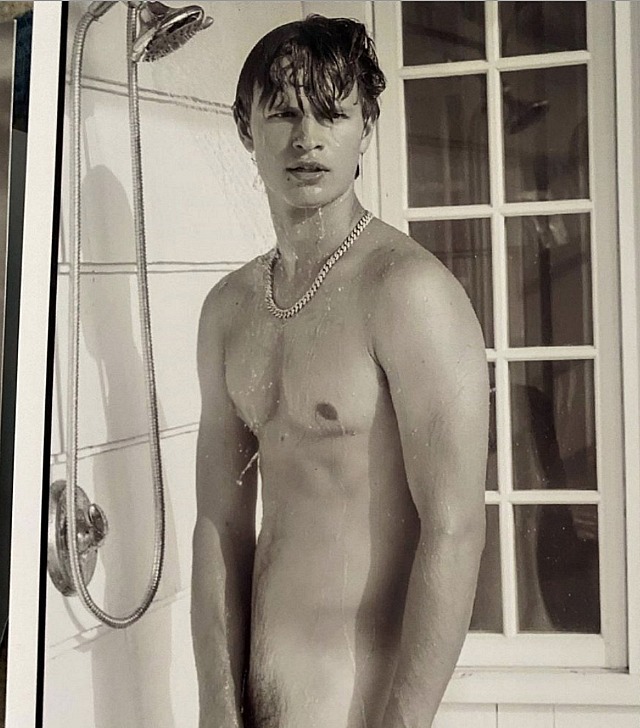 In a piece about whether or not the big film festivals will happen in the early fall, Variety‘s Owen Gleiberman has threatened the Telluride Film Festival honchos Tom Luddy and Julie Huntsinger with a guilt-trip scenario.

“To be or not to be — that’s the question the fall film festivals face,” Gleiberman writes. “As it turns out, there is now a liberal answer to that question and a conservative answer, and the two are at radical odds. The liberal answer states that unnecessary risk, at a time like this, is unforgivable, and that as a society we should err on the side of collective caution. The conservative answer is that the economy needs jump-starting, as soon as possible, and that too much caution is for snowflakes.

“But that creates a problem for festivals, because they are among the most liberal environments on the planet. [Let’s] pretend that it’s two years from now, and that the very issue we’re talking about is the subject of a documentary that’s playing at the 2022 Toronto Film Festival. Which side of the issue do you think that documentary, or the audiences watching it, is going to come down on?

“They’re likely to come down on the same side of the issue that I do — believing that six months into the eruption of this pandemic, the risk of spreading the virus makes the international gathering of people at a film festival an untenable, and unlikely, proposition.”

HE response to Gleiberman: The Toronto Film Festival will be a pale shadow of its usual self, if that. And very few will want to attend the Venice Film Festival in disease-ridden northern Italy.

But robust, mountain-fresh, virus-free Telluride has a real shot, and yet you’ve just put the fear of God into Julie and Tom by suggesting that a 2022 documentary about Hollywood and the pandemic might portray them in a bad light.

What about offering tests to everyone who attends a week before Telluride? Or as everyone arrives? If you test negative you get to attend partially filled theatres and maybe even attend an outdoor party or two. If you test positive you’re immediately escorted out of town with instant refunds for your condo or hotel costs along with your pass.

Award season has to launch with some kind of hype-generating event. If not Telluride, what? The NY Film Festival isn’t going to happen as usual.

What may happen is that the year 2020 won’t officially “end” until 1.31.21 or perhaps sometime in February. And that the Oscar telecast won’t happen until March. They’ll need extra time to fit everything in.

The summer is dead, cancelled — we all understand that. But not the fall, and not Oscar season…please!

In and of itself, this Steven Spielberg quote has me worried about West Side Story (20th Century, 12.20) because it suggests that his musical vistas and perceptions aren’t what they could or should be. Everyone’s maximum musical receptivity happens in their late teens and 20s, and young Spielberg was right in that sweet spot (18 to 21) during the mid ’60s era when the Beatles were really cooking with petrol.

Has anyone ever heard of a baby boomer who wasn’t completely throttled and transformed by the trifecta of Rubber Soul, Revolver and Sgt. Pepper’s Lonely Hearts Club Band? What kind of walls did you have to live behind to be immune? And yet Spielberg didn’t become a Beatles fan until he listened to the White Album in late ’68. Where the hell was he in ’65, ’66 and ’67? What was he doing, living off the land in Borneo?

Oh and the Beatles were a “fad” for only the first few months after they exploded, and their musical maturity phase began to kick in around mid ’65. If you weren’t tuned into what they were doing between Rubber Soul and Sgt. Pepper you were a Martian. And by his own admission, that was exactly what Spielberg was back then.

So if he wasn’t “hearing” the Beatles during their most creative period what else has he missed over the last half-century? What other kinds of musical blockages has be been dealing with? Seriously — this quote is huge. It contains volumes, multitudes. 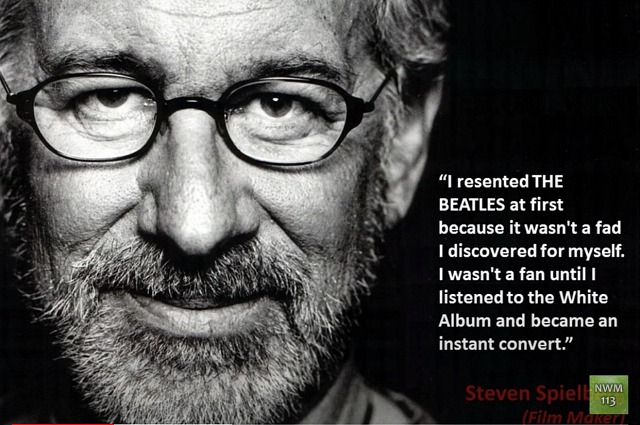 In the fall of ’82 I wrote a big, laborious piece for The Film Journal (which I was managing editor of) about the making of Tootsie and particularly the then-astounding notion that a present-day New York comedy about an actor who can’t get a job could cost $21 million, which at the time was way above the norm. Anyway I talked to several creative participants about it, including cowriters Robert Kaufman, Murray Schisgal and director Sydney Pollack. At at the end of the writing process I was fairly sick of it.

But I never heard this particular story from Dustin Hoffman before today.

The one element I didn’t care for was Dave Grusin‘s music. Too peppy, too coy, too cute-sounding, And I wasn’t a huge fan of Teri Garr‘s performance. But I loved the supporting turns by Pollack (as Hoffman’s agent), Charles Durning, Jessica Lange, Doris Belack, Bill Murray and Dabney Coleman.

“Joe Biden scans….look, back in the old days, when we [Wilson and his fellow Republican strategist] were trying to run against Barack Obama in 2009 and ’12, we threw everything [we could think of] at the guy…’he’s a socialist, he’s a Communist, he was educated by Bill Ayers‘….all this stuff, right?

“With Joe Biden, they believe there’s a fundamental decency…they may think he’s goofy, a little bit of an oddball, tells wacky anecdotes…but a lot of voters don’t think Joe Biden has malice. And a lot of voters do…a majority, a good solid majority of voters think that Donald Trump is corrupt and mendacious and does have a degree of cruelty in him.

“That idea, that the president can be nasty and transgressive and a dick…it kind of plays when there’s peace and prosperity. It doesn’t play when we’re in a Great Depression, Part Two. And when we don’t know how this disease is gonna play out, and how many people are gonna die. That suddenly is more serious to voters.”

The Trump/Republican/Open Up slogan for the 2020 election: “If grandma has to die in order to open things up and get the economy rolling again, then grandma has to die. And maybe your brother or brother-in-law in the bargain. We’re sorry but these are tough times and tough choices need to be made. Life is hard but the strong survive.”

The podcast title is “Dope Fiend for the Dow Jones.” Wilson and Molly Jong-Fast. The full podcast runs 25 minutes.

Judd Apatow‘s Trainwreck was beautifully written — frequently funny, finely balanced, touched bottom in the second and third acts. Even though I prefer the sequel (Day of the Soldado) to the original, Sicario was a landmark Mexican drug-dealing movie. (The problem was that idiotic scene in which Emily Blunt‘s FBI agent picks up some dude in a bar and takes him back to her motel room…c’mon!) The dialogue and plotting in Son of Saul was minimal, but it was a major-league film with ten times the magnitude of The Hateful Eight.

And yet 82.9% of the responders believe that Quentin Tarantino‘s script, which was basically about tough talk, braggadocio and sudden bursts of violence (including the sadistic beating of poor Jennifer Jason Leigh), is superior to the other three. Four out of five! 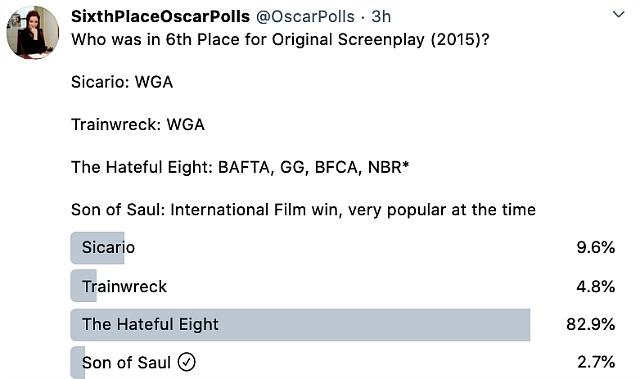 Posted on 4.14, here’s a sologui remix of George Harrison‘s original 1969 demo with Nina Simone‘s 1972 version. You could argue that “Isn’t It A Pity?” is one of the most on-the-nose titles in history. There’s a whole community or genre of songs, films, plays and novels that follow the basic template by (a) describing or depicting some kind of tragedy or downish scenario of one kind or another and (b) asking “given how sad or awful things are, can’t we do better?” John Lennon‘s “Imagine” is another effort in this vein. The more artful song, film, play or novel bypasses the “can’t we do better?” part. Because it’s an unnecessary question. Simply presenting a bad/tragic situation is more than sufficient. One example of the latter kind (i.e., stark representation) is Cristian Mungiu‘s 4 Months, 3 Weeks, 2 Days. Mungiu just lays it out plain. Either you get it or you don’t.