34 Comments
Half Docudrama, Half Documentary

It doesn’t appear as if Grant, a three part History Channel presentation from exec producer Leonardo DiCaprio and biographer-historian Ron Chernow about the legendary Civil War general and U.S. President, can be called a “pure” documentary. The trailer suggests a reenactment drama mixed with a talking-head doc.

Directed by Malcolm Venville (Henry’s Crime), Grant is premiering on the History Channel beginning Monday, 5.25, or on Memorial Day. The usual 5.30 date has been moved up five days because 5.30 falls on a Saturday. Yeah, I know — why not have the holiday on Friday, 5.29?

I’m very sorry to report that Nancy Dawson, wife of author and critic Matt Zoller Seitz, passed today from cancer. They were married in February 2017. Nancy was the sister of the late Jennifer Dawson, whom MZS was married to from ’94 until her death on 4.27.06. We all know life can be randomly cruel, depending on the breaks, but this is surreal.

Seitz is an editor-at-large at RogerEbert.com and TV critic for New York magazine and Vulture.com. His books include “The Wes Anderson Collection” (’13), “Mad Men Carousel: The Complete Critical Companion” (’15), “The Oliver Stone Experience” (’16), “Movies Are Prayers: How Films Voice Our Deepest Longings,” cowritten with Josh Larsen, “Guillermo del Toro’s The Devil’s Backbone” (’17), cowritten with Simon Abrams, and “The Sopranos Sessions” (’19), co-written with Alan Sepinwall.

It’s been suggested that friends and mourners can donate to @transformcincy (aka Transform), a transgender youth charity that Nancy founded. 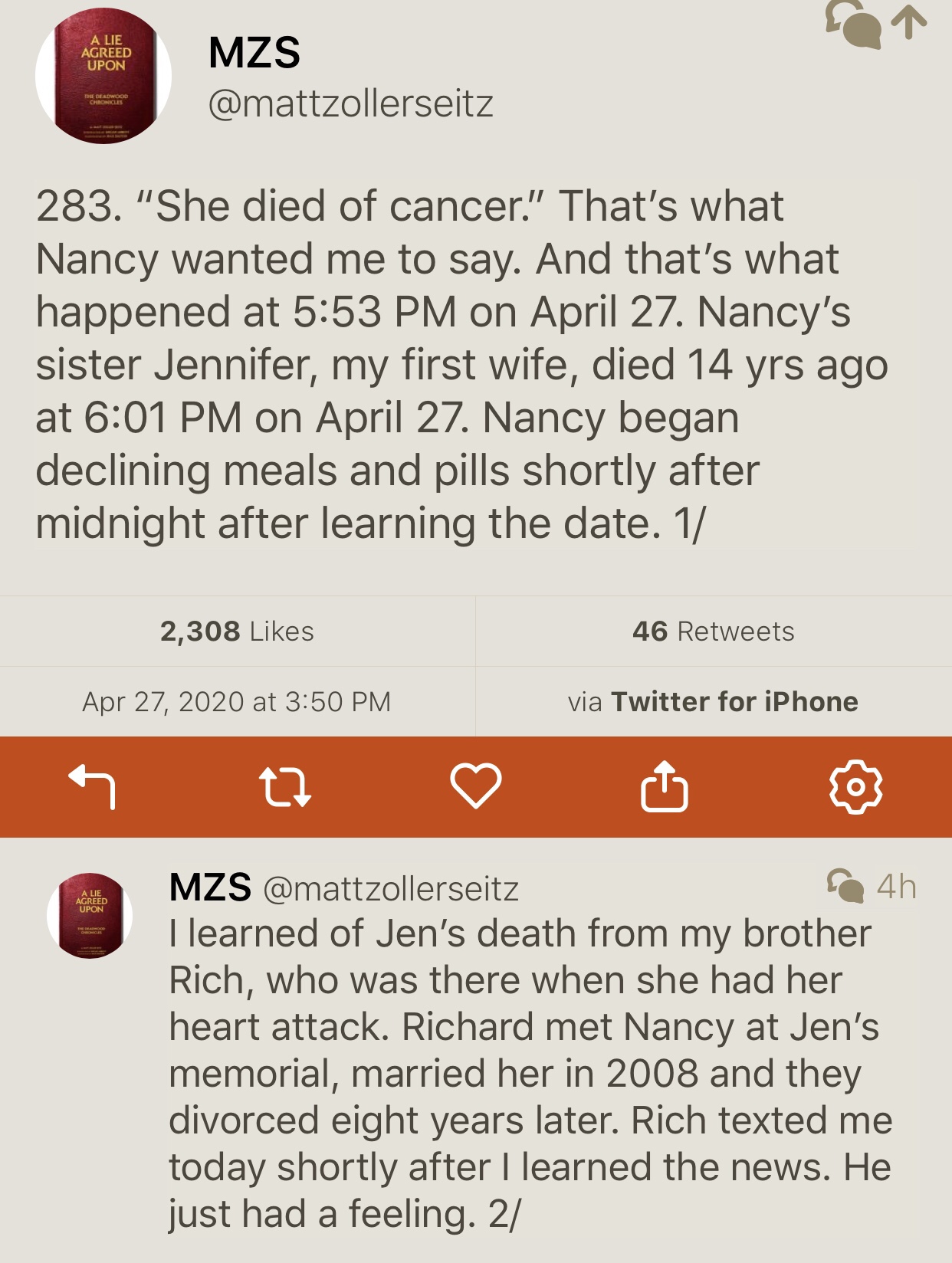 We’re all living in a wonderful time right now. Truly magical. If you stay inside (which you should), you’ll slowly die of spiritual and/or economic malnutrition. It might take a few more weeks or months, but sooner or later you’ll become a shell of the person you used to be. And if you venture outside you might catch COVID-19 and wind up dead or struggling for dear life. So you’re pretty much dead or depleted any way you slice it. Cool or what?

Judd Apatow and Pete Davidson‘s The King of Staten Island (Universal, 6.19) has bailed on theatrical. Which is a shame but that’s how things are.

We’re all sick of streaming stuff at home. I for one would love to catch it at a special all-media Arclight screening for masked, glove-wearing journalists who’ve recently tested negative for COVD-19 or are otherwise willing to risk death in order to watch a movie on a big screen again. With everyone sitting three seats apart, of course. I’m willing. Especially since we’re talking six or seven weeks from now.

The new plan is for The King of Staten Island to the usual digital platforms starting on 6.12. A 48-hour rental will set you back $20 bills.

The plot of the semi-autobiographical coming-of-age comedy, cowritten by Apatow, Davidson and Dave Sirus, is as follows:

“Scott (Davidson) has been a case of arrested development ever since his firefighter father died when he was seven. As his younger sister (Maude Apatow) heads off to college, Scott, now in his mid 20s, spends his days smoking weed, hanging with the guys and hooking up with his best friend (Bel Powley).

“But when his mother (Marisa Tomei) starts dating a loudmouth firefighter (Bill Burr), it sets off a chain of events that will force Scott to grapple with his grief and take his first tentative steps toward becoming Pete Davidson.” 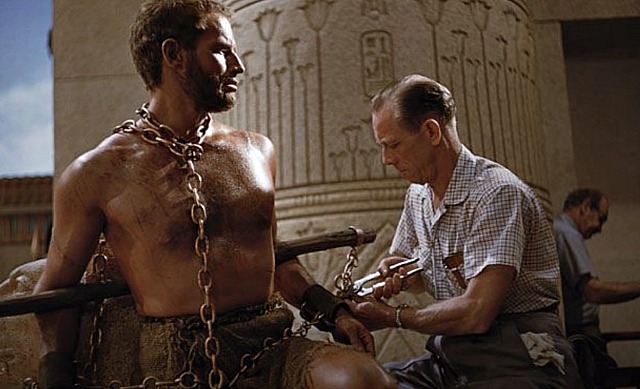 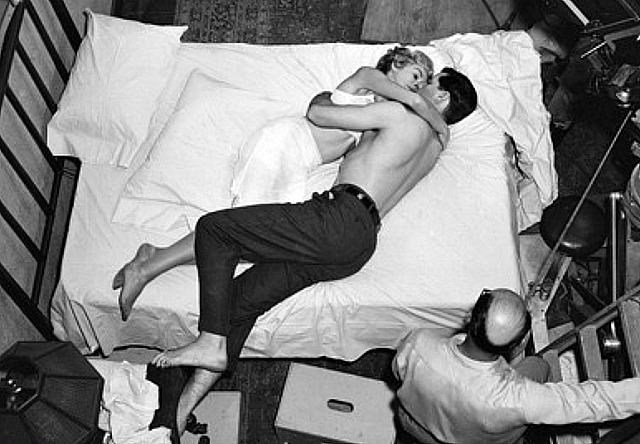 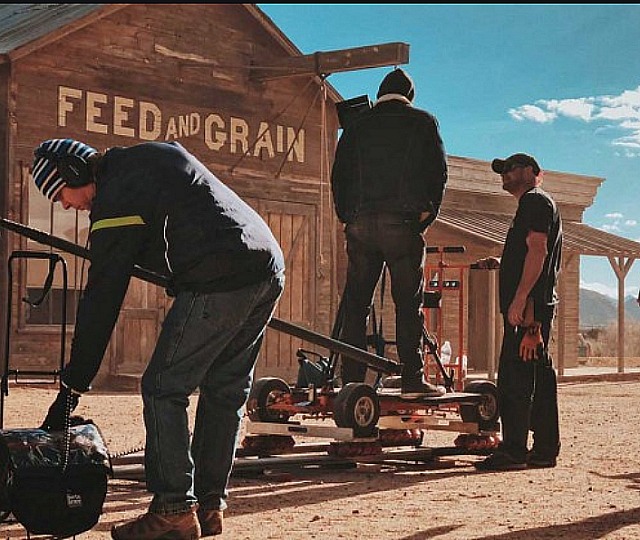 The disaster trigger (for me at least) is when an attempt is made to sell Rogen as a sexual being who scores or at least gets lucky. That is a total stopper. If I was some kind of Supreme Hollywood Dictator I would say “keep those dopey Rogen-Goldberg films coming but Rogen can never get laid again with an attractive woman…that scenario is OUT for the rest of his career. Rogen is 38 but looks 49 if a day, and the idea of him participating in any sexual scenario with anyone or anything (including a love doll) doesn’t work for me…that is my final edict.”

All to say that streaming Long Shot was recently suggested, just for the goofy fun of it. And I said “no, no…I can’t, I really can’t. Because it farts in the face of reality at every turn, and because I sat there like a sphinx when I saw it in a theatre.”

My review posted almost exactly a year ago. Here’s most of it:

“What if a bearded, bulky-bod, hairy-chested journalist with an extremely blunt and adolescent writing style and a name (i.e., Fred Flarsky) that says “I’m a dork”…what if the current U.S. Secretary of State, a 40ish foxy type named Charlotte Field (Theron), used to babysit Flarsky (Rogen) when he was 10 or 11 and she was 16 or thereabouts, and is now thinking about running for President because the current Oval Office occupant wants to become a bigtime movie actor?

“And what if Flarsky suddenly meets Field at a party and (a) they recognize and reminisce, (b) she decides to hire him as a speechwriter because she needs a guy who writes like a pissed–off seventh grader but also (c) quickly develops an attraction for Flarsky, and before you know it is doing him six ways from Sunday? And then love enters the picture and the movie is suddenly about values.

“Given the extremely improbable story line in Long Shot, I figured they’d try to aim it at a late-teen sensibility, perhaps even at 20 or 22 year-olds. Low and semi-coarse and therefore ‘funny’, but occasionally sounding and behaving like, say, a Seth Rogen-flavored In The Loop. Remember that Armando Iannucci film? How fast and sharp it was? How skillful and sure-footed?

“Well, guess what? In The Loop isn’t stupid enough for the Long Shot crowd. It isn’t stoned or digressive or downmarket or druggy enough. (There’s a scene in which Seth and Charlize drop some ‘Molly‘ in Paris.)

“Long Shot, alas, is aimed at a 13 year-old mentality. Okay, a 14 year-old mentality. Every line, every scene save for three or four half-decent moments (did I hear a Brett Ratner joke in there somewhere?) plays to the stoners and dipshits in the cheap seats, otherwise known as the Seth Rogen crowd.

“This would be totally forgivable, of course, if Long Shot was funny, but it’s not. When you play it this broadly and this coarse, when every bit and line is written and played on an obviously farcical but brainless jack–off level without the slightest respect for the venal but semi-grown-up political milieu out there or for human behavior as most of us know it, IT’S NOT FUCKING FUNNY.

Chris Matthews to Vanity Fair‘s Joe Hagan on why he resigned early last month: “I didn’t argue about it, I didn’t deny it. I accepted the credibility of the complaint in the article. I didn’t want to challenge the person that made the complaint and wrote the article. I thought it was very credible and certainly within the person’s rights to write that article, of course. That was highly justified. Basically, as I said, to repeat myself, it’s inappropriate in the workplace to compliment somebody on their appearance, this is in the makeup chair, and I did it.”

Key Matthews excerpt: “On the matter of Biden’s vice-presidential pick, Matthews thinks Minnesota Senator Amy Klobuchar is the ideal choice for helping Biden grab the center, especially in the Midwest.

“‘It looks like she could be president if necessary, but not determined to have the office right away kind of thing,’ he said. ‘It’s very tricky when you have a president who will be in his 80s [for] half his first term or his only term perhaps. To pick the other person that’s too ready to be president, you want somebody who’s willing to be vice president for a while. Be vice president and not look like the guy’s a lame duck and I’m ready to take over.’

Embed code for Hive podcast insisted on including a large blank space so I trashed it. Click here for podcast.

“At the same time, Matthews sees the recent leadership of state governors like Gretchen Whitmer, Andrew Cuomo and Gavin Newsom as a preview of what national leadership in a post-Trump era might look like. ‘I think that’s a pretty good indicator what normal will look like when we get back to it,’ he said. ‘One of these governors may be the next president.'”

Vanity Fair‘s Joe Hagan: “[To me life is currently feeling like] Groundhog Day as written by Dostoevsky…we’re in a Russian novel that’s never going to end.”

Before introducing his Matthews discussion (which doesn’t happen for a good 10 or 12 minutes), Hagan sounds like a quivering p.c. candy-ass when he says he initially felt a little funny about even talking to Matthews, given his controversial canning from MSNBC for making a sexist comment to a Hardball guest in a dressing room, and for being generationally out-of-synch with the New Stalinism.

Hagan is right. Matthews is generally out of synch and he did say the wrong thing to the guest in question. But for decades he was a hotshot talk-show host, a veteran political news guy and Washington insider (and still is the latter two)…and Hagan feels funny about even talking to him?