Amazon Studios movie exec Ted Hope has left that position for a multi-year first look producing deal with Amazon. The official word is that Hope decided to abandon the prestigious job due to a primal itch to get back into hands-on producing, which he did for years at other outfits.

The general presumption, of course, is that Hope was pushed out by his Amazon superior Jennifer Salke, mainly because his Amazon track record was colored by investments in too many under-performers. Because Ted’s picks were too indie-quirky. Which resulted in Joe and Jane Popcorn saying “Uhm…what?”

Hope joined Amazon five and one-third years ago (i.e., in January 2015) as the head of development, production and acquisitions. In January ’18 he began serving as the co-chief of Amazon movies, reporting to Salke.

2016 was Hope’s finest Amazon year with the release of Kenneth Lonergan‘s Manchester By The Sea (worldwide earnings of nearly $79 million) and Asghar Farhadi’s The Salesman. Manchester won two Oscars (Best Original Screenplay + Best Actor for Casey Affleck), and Salesman won for Best Foreign Language Film. But except for Pawel Pawlikowski‘s Cold War (’18), a well-reviewed Oscar contender, it was all downhill after that.

Lynne Ramsay’s You Were Never Really Here (’17) was and is a first-rate arthouse assassin flick, and Joaquin Phoenix won the Best Actor prize in Cannes (yay), but Joe and Jane said “naah.” Gus Van Sant’s Don’t Worry, He Won’t Get Far On Foot (’17), a recovery-from physical-trauma flick that I mostly liked, also sputtered with the hoi polloi–

In 2018 Hope got all hot and bothered about Mike Leigh‘s Peterloo, which also fizzled with a lousy $152K in North America and $1.9 million worldwide. Felix van Groeningen’s Beautiful Boy (’18) was a moderately weak sister with worldwide earnings of $16.5 million. Luca Guadagnino’s Suspiria (which broke my heart) opened in late ’18 and ended up with $7.9 million worldwide.

Amazon ran aground big-time in 2019 with four pricey Sundance acquisitions — Late Night, Honey Boy, Brittany Runs A Marathon and The Report — all shortfalling with the meat-and-potatoes public.

Cold War, a 2018 release, lost the foreign-language Oscar to Roma in early ’19, true, but it was a film everyone had to see. It was the most stunningly photographed black-and-white film in a long time, or at least since Pawlikowski’s Ida.

If I was running Amazon instead of Salke, I would’ve said to Hope, “Ted…these films are critically respected and all, but they’re mainly aimed at guys like yourself and your ahead-of-the-curve friends and a certain percentage of the Academy. What about Amazon…you know, releasing at least an occasional film that Average Joes want to see?”

For her You Must Remember This podcast, Karina Longworth has created a ten-episode tribute to legendary producer, production designer and Pretty Baby screenwriter Polly Platt. It’s called “Polly Platt, The Invisible Woman.” I haven’t had a chance yet. I’m thinking of catching the first two episodes on the drive back to Los Angeles later today. 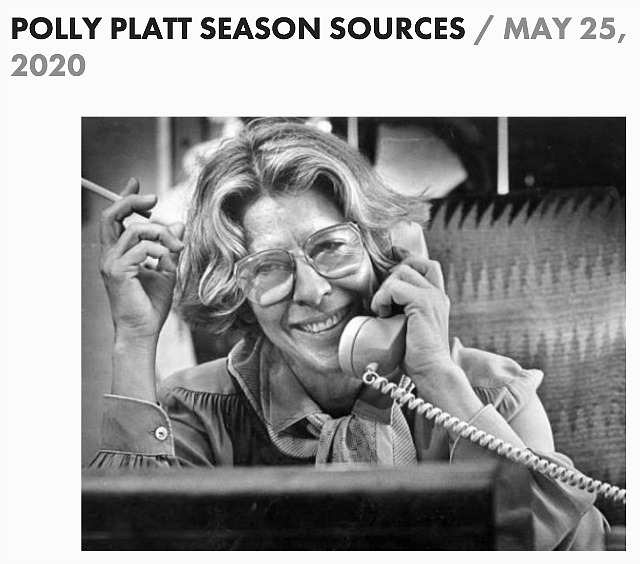 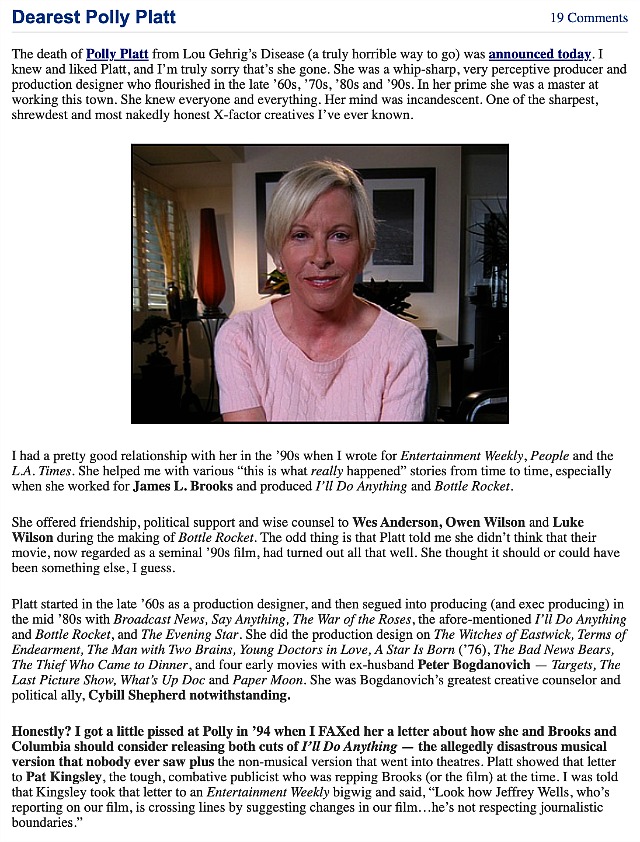 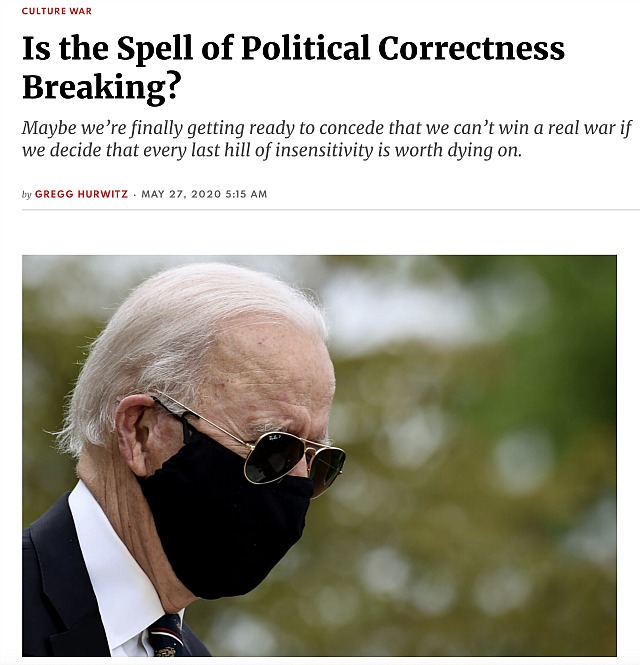 Excerpt from Alaric Dearment article on abovethelaw.com, posted on 5.27: “In their zeal to boost Reade’s accusation and lend credence to her claims, people like podcaster Katie Halper, Current Affairs editor Nathan Robinson and many others effectively presumed Biden’s guilt. But mounting evidence has raised serious doubts about the veracity of Reade’s allegation and her own credibility — mounting evidence uncovered, I should add, by professionally trained journalists who actually knew what they were doing.

“To be sure, no concrete proof –- in the form of damning or exonerating documentary or photographic evidence –- has surfaced of whether Biden is guilty or innocent, or of whether Reade’s allegation is true or false. Because of that, only a fair and impartial examination can determine whether the totality of evidence at hand favors or disfavors her allegation or remains inconclusive. But this isn’t really about Reade, Biden, or sexual assault — it’s about how activist journalism is ill-equipped to provide such an examination, and how its poor handling of the Reade story is a shining example of that.

Despite the obvious, authorities haven’t charged Chauvin because, I’m assuming, certain elements within the Minneapolis police department and judicial system have resisted because they’re persuaded it would be rash or bad for police morale or some such hooey.

No one believes that the other three officers involved in the incident — Thomas Lane, Tou Thao and J. Alexander Kueng — should be charged, but Chauvin definitely needs to pay the piper.

“I’ve wrestled with, more than anything else over the last 36 hours, one fundamental question: Why is the man who killed George Floyd not in jail?” Frey said in a news briefing. “If you had done it, or I had done it, we would be behind bars right now. And I cannot come up with a good answer to that.”

“But the film closest to my heart…the one that really rings my deep emotional bell after all these years…well, there’re two, really. Jaws 4: The Revenge and, of course, The Swarm.”