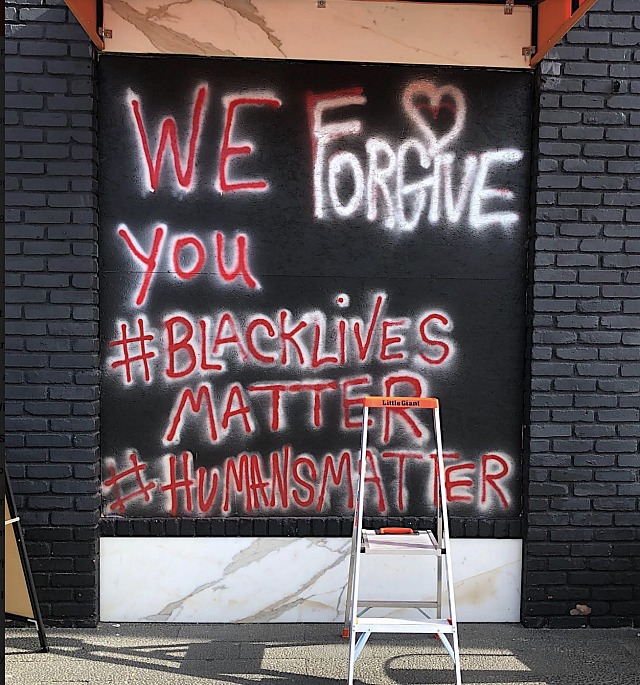 The woman who painted this sign outside her Melrose cafe & snack store had better hope Seth Rogen doesn’t drive by and spot the words “humans matter.” He told several people earlier today that “all lives matter” is a totally unacceptable slogan and to fuck off and die. 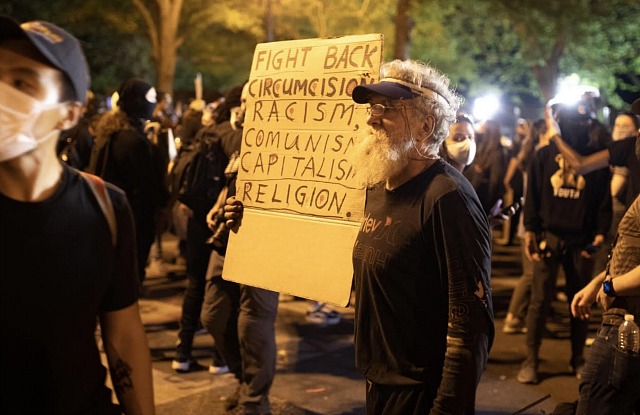 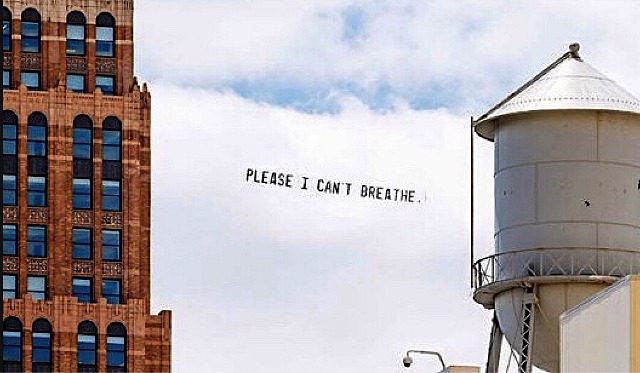 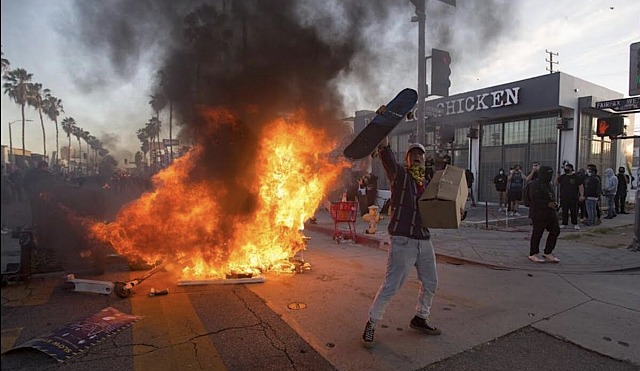 From “Brief Shining Moment of Freddiemania,” posted on 1.17.15: “I’d like to take a brief bow for my efforts as a freelance public relations guy for New Line Cinema in ’85 and ’86, and particularly my promotion of Jack Sholder‘s A Nightmare on Elm Street 2: Freddy’s Revenge, and even more particularly the semi-phenomenon known as ‘Freddiemania,’ which originated with spottings of movie fans dressed as Freddy Krueger a la Rocky Horror for midnight showings of Wes Craven‘s A Nightmare on Elm Street (’84).

“There weren’t that many Freddy freaks to be found, to be perfectly honest, but it was an interesting and amusing enough story to persuade Entertainment Tonight and the N.Y. Times and other big outlets to run pieces on it and to speak with Sholder (who later directed The Hidden, one of the finest New Line films ever made) as well as Freddy himself, Robert Englund, with whom I became friendly and hung out with a bit. (Producer Mike DeLuca was a 20 year-old New Line assistant at the time.) One of my big Freddy promotional stunts was persuading Englund to march in New York’s Village Halloween Parade on 10.31.85 from Houston Street up to 14th or 23rd or something like that.”

Directed by Roman Chimienti and Tyler Jensen, Scream, Queen! My Nightmare on Elm Street is currently streaming on Amazon. It’ll also be released on SHUDDER, the horror streaming service, on 6.4, or two days hence.

Best protest moment since the tragic death of George Floyd? Certainly one of them.

Cheers rose up from the crowd as these dudes rolled up. Clip-clip-clip-clop. pic.twitter.com/x1h8UpmyQy

If I needed to collect my thoughts and assess my options after being asked a politically difficult question, I would maybe stall for eight to ten seconds…something in that realm. But a 21-second delay is too much. It implies a certain lack of focus or even maturity. Whatever you’re thinking, just spit it out. Even if you’re afraid of saying it.

The trailer for Derek Wayne Johnson‘s 40 Years of Rocky: The Birth of a Classic, which is narrated by Sylvester Stallone, seems to be mostly about the making of the original Rocky. That 1976 Oscar winner was the only “pure” entry in the long-running franchise — the only one that got everything right and a film which everyone still loves or at least likes.

The doc’s title, however, suggests that the long-running Rocky franchise (eight films including the original) will be explored. Which would be a shame. There’s nothing glorious or heart-warming about several attempts to make more money off a popular brand.

Stallone played Rocky Balboa (a name inspired by the real-life Rocky Graziano and inspired by Robert Wise‘s Somebody Up There Likes Me) in all eight films. He wrote seven of the eight and directed four of them.

40 Years of Rocky: The Birth of a Classic will be available on-demand as of Tuesday, 6.9.

The doc features heretofore unseen pre-production and principal photography footage shot by Avildsen and others.

Posted on Facebook by Rod Lurie, around 9:30 am (Tuesday, 6.2): “It was a good speech, Joe. Eloquent and even presidential. On any other day I would say it was perfect. But today? It was the opposite of what we needed to hear from you.

“What we need is blistering anger. We need to see the veins popping in your forehead. Donald Trump opened fire on innocent and peaceful protestors yesterday and this “Gentleman Joe” stuff isn’t gong to fucking cut it. Because we’re at war now — war against a tyrant, a would-be dictator, a leader who has learned more from Kim Jung Un than he has from Winston Churchill.

“You should not have buried the lede in that speech. You needed to come out — FIRST words out of your mouth, no ‘good morning’, no ‘I’m happy to be here’, but …

“‘Yesterday the President of the United States, the man who holds the same office as did George Washington and Abraham Lincoln, terrorized peaceful American citizens with tear gas and flash grenades and rubber bullets. You saw it, I saw it, we all saw this despicable dark moment in American history — and he did it for one reason’…and then, Joe, you should have held up that photo of Trump holding up a bible in front of that church…’So he could do this. THIS.’

“Then you should have taken a beat. Chilled for a second.

“‘Folks, I have been driven by my faith my whole life. I know a real Christian when I see one. And I know the fakes as well. And I know fake patriots: The charlatans who use the Lord and the flag as a prop. The men who order violence on other humans and then stand in front of a church holding a bible upside down as the cameras flash.’

“‘A year from now, unless we do the right thing, scenes like the ones we saw yesterday will simply become a way of life in or country — because that is what happens in fascist natio.

“‘Trump got the votes he did because he identified an anger in this country and tapped into it. Well, we are angry still. Angrier, even. And now it is time for YOU to tap into that. The difference is that you actually empathize with these real Americans. So damn man, show us…SHOW US.’

“Decency, Joe, doesn’t always have to be polite.”

HE side-comment: Every YouTube video of Biden’s speech, presumably sourced from the same pool camera, is out of focus. How hard would it have been for the person in charge to realize what was happening and go up to the camera and manually correct the focus?

Posted early this morning in the “See HD Boxy Jacket While You Can” thread:

“FMJ is a flawed masterwork due to the relatively weak and longish Vietnam middle section that’s mostly about waiting for something to happen. The focus is basically didactic moral commentary rather than narrative tension.

‘However, the opening Parris Island boot camp section + the fires-of-hell finale in Hue with the young-girl sniper are jewel-perfect.”

Charles Laughton’s Sir Wilfrid Robarts on yesterday’s bible photo-op in front of St. John’s Episcopal Church: “My Lord, I would also remind my learned friend that President Trump has lived such an arrogant and deplorable life, told so many lies and violated so many solemn oaths that I am surprised the Testament did not leap from his hands when he posed with it before the cameras.”