It might as well be faced: Poe Dameron and that lethargic, glum-faced folk singer Llewyn Davis have passed on, never to return. They’ve been replaced by a tough-as-nails, frosty-haired Lee Marvin type. Soul on ice.

Netflix was allegedly concerned about the cost of using an expensive 16mm film stock that gave the picture a “chrome look,” which Lee was insisting upon. That plus having to send the 16mm footage from Vietnam/Thailand to the U.S. for “processing at a specific lab” added to an allegedly burdensome price tag.

I have a semi-sophisticated eye when it comes to exotic or old-time film stocks, and all I thought when I saw the 16mm footage in Da 5 Bloods was “okay, Spike shot in 16mm to make it look 50 years old.” I didn’t say to myself “holy shit, what a super-authentic 16mm chrome look!” I’ll bet there are no more than 75 people on the planet earth who can tell the difference between regular, old-style 16mm footage and 16mm “chrome” footage, whatever the hell that looks like.

In other words, 99.9% of the viewing audience wouldn’t recognize 16mm chrome footage if it shook them by the lapels.

I don’t know what the 16mm costs of Lee’s film came to. Maybe they were considerable and maybe not. But if I was a Netflix exec riding herd on Da 5 Bloods, I would have said to Spike, “Okay, but why do we have to spend hundreds of thousands on exotic 16mm film plus expensive processing when you could shoot your ’60s sequences on a regular 4K digital camera and then use 8mm, an app that I have on my iPhone, to make it look like 16mm? Very few would know the difference.”

As for Netflix telling Lee that it wouldn’t pay to de-age the four long-of-toothers (Delroy Lindo, Jonathan Majors, Clarke Peters, Isiah Whitlock Jr.) for Vietnam flashback combat sequences, I for one thought it was cool and daring that Lee didn’t do the usual usual.

Last night I watched Part One of Sony’s all-new Lawrence of Arabia 4K UHD Bluray, and I’m trying to think of a more sophisticated way of saying “wow!” What if I use boldfacing and capitalizing and say “WOW!“?

When it comes to assessing 4K Blurays HE is all about “the bump,” and holy moley, does this puppy deliver in that respect! The bump effect is almost startling — a dramatic, unmissable upgrade from not just the 2012 1080p Bluray but even the 4K streaming version that I purchased in December 2016. Due to the sharpness, radiance, steadiness and consistency, and augmented by HDR-10 or Dolby Vision.

A thousand conveyances to you and yours for delivering the most exciting and orgasmic home video experience of my life — a mind-blowing eye bath.

This gives me hope that I might notice a similar bump effect from the forthcoming 4K Bluray of Spartacus, which of course is also drawn from (a 6K scan of) large format elements.

I was especially impressed with the rendering of LOA‘s nighttime scenes. David Lean and dp Freddie Young didn’t shoot them after dusk, of course, but they really look as if they might have been. I’ll be watching Part Two sometime later today or tonight, and I can’t wait for the Jose Ferrer “beating in Derra” sequence and the “no prisoners!” moment on the way to Damascus.

One small problem: I didn’t want to listen for the 179th time to Maurice Jarre’s overture so I flipped forward a chapter, naturally presuming it would take me to the Columbia logo and the main titles. No! It took me to Peter O’Toole painting a watercolor map in his “nasty dark little room” in Cairo. I adore the main title, fatal motorcycle ride and St. Paul’s funeral sequences. But the way to see them on the 4K is to either submit to the overture or fast-forwarding. (I don’t like fast forwarding as as rule — I only use chapter stops.)

By the way, even the 4K UHD Dr. Strangelove looks slightly different. The faces look less white or glare-y. They have a grayish graded quality. And, for some reason, the bars on the side that render the image in 1.66 are no longer black — they’re now very dark gray.

I don’t have a huge amount of interest in watching the other four in the package (Gandhi, A League of Their Owen, Jerry Maguire, Mr. Smith Goes to Washington) but I’ll get around to them.

21 Comments
Why Is “Snyder Cut” Teaser in Boxy Format?

As a father and a human being, I feel great sadness about the tragedy that enveloped poor Zack Snyder and his family three years ago. But as a rule, Hollywood Elsewhere has hated Snyder’s films and especially his superhero bullshit for a long, long time. That’s just the way it is.

Snyder isn’t exactly Satan, but I’ve long regarded him as a high-style scourge of 21st Century cinema. I was half taken with Watchmen, okay, but otherwise you can shitcan and forget Dawn of the Dead, 300, Sucker Punch, Man of Steel, Batman v Superman: Dawn of Justice, Justice League, etc.

But I’m currently intrigued as to why a just-released teaser of the Snyder Cut, his unreleased version of Justice League, which Snyder abandoned following said personal tragedy, is presented in a 1.37:1 aspect ratio.

The 34-second teaser focuses on Gal Gadot’s Wonder Woman as she comes across some kinds of bullshit artifact in a torch-illuminated cave, blah blah. Before the clip cuts to the formidably evil Darkseid, Jesse Eisenberg’s Lex Luthor says something like “the bell’s already been rung, and they’ve heard it…out in the dark among the stars…ding dong, the god is dead.”

Or whatever. Who cares? The Snyderverse is a hellish place to contemplate, much less visit. 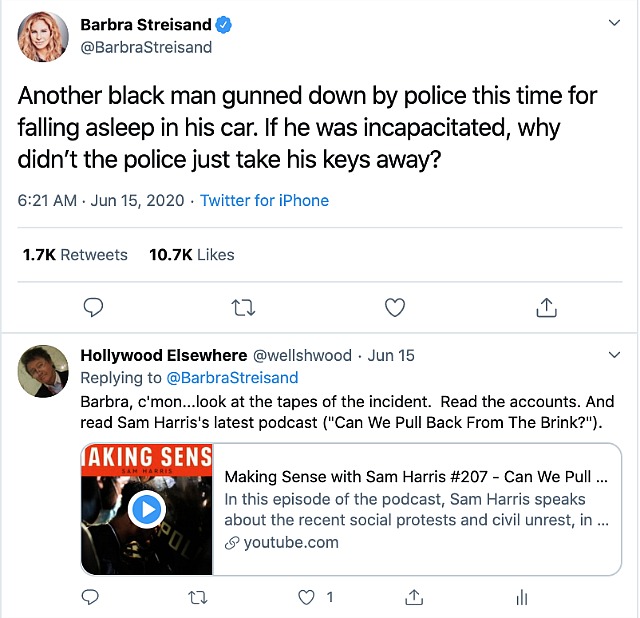 Video tells the tale: Rayshard Brooks was gently told to drive out of the Wendy’s take-out line and into a parking place. If he had done that it probably would’ve ended there. But Brooks was so bombed he couldn’t even manage that. And then he freaked when they decided to cuff him.

From “Look At The Facts in the Rayshard Brooks Case — The George Floyd Killing Was Different“, a 6.18.21 USA Today op-ed by Michael J. Stern, a member of USA Today‘s Board of Contributors and a federal prosecutor for 25 years in Detroit and Los Angeles.

Subhead: “There is no shortage of police misconduct due to racism. But claiming it where it may not exist weakens the righteous cause of stamping it out.

“That a man died [outside an Atlanta Wendy’s] is tragic. But the protests, celebrity outcry and general media capitulation that equates Brooks’ death with that of George Floyd, and countless other African Americans who were murdered at the hands of flagrant police misconduct, is wrong.

“In a headline reminiscent of the National Enquirer, the Los Angeles Times ran an editorial [on Tuesday, 6.16] that was titled ‘Atlanta police killed a Black man for being drunk at Wendy’s.’ No — Mr. Brooks was not killed for being drunk.

“Rayshard Brooks was killed after resisting arrest, attacking two police officers, taking an officer’s Taser and shooting it at a police officer. The decision by the Times’ editorial board to intentionally omit this last fact is damning proof of its effort to create a narrative that serves a social agenda, despite evidence that supports a contrary conclusion.

“American Bar Association rules prohibit prosecutors from making pretrial statements that could influence public perception and prejudice an accused’s ability to get a fair trial. Howard violated this rule by making a lengthy presentation of evidence that supported his position and ignored key facts that did not. Judges, prosecutors and defense attorneys typically refer to Howard’s impropriety as trying the case in the press.

“A new and disturbing allegation presented by the district attorney is that the officer kicked Brooks after he was shot. Though acts after an event can be considered reflective of an earlier intent, the pivotal actions in this case will focus on what happened in the seconds before the shooting.

“In Georgia, an officer is entitled to use deadly force when he reasonably believes his life is in danger or he’s at risk of receiving a serious physical injury. When this case goes to trial, the jurors will be instructed that they must consider the context of Brooks attacking the officer, grabbing the Taser and shooting the Taser at the officer. This analysis includes the possibility that if Brooks hit the officer with the stolen Taser, he could grab the officer’s gun and shoot him.

HE to Hot-Shot Award-Season Player/Contributor/Handicapper: “As you know the Academy’s decision to add two months to 2020, with the awards-qualifying year ending on 2.28.21, is about (a) alleviating the logjam of year-end releases (including Oscar hopefuls) due to COVID and (b) allowing those Oscar-contending films that had planned to open by 12.31.20 an extra two months to complete post-production and be released by or before said Oscar deadline [2.28].

“As things stand there will be a seven-week period of campaigning and whatnot (Academy nomination voting, Golden Globes, PGA/DGA/WGA awards, Santa Barbara Film Festival, final Oscar balloting) between March 1, 2020 andSunday, 4.25 (Oscar night).  But are you telling me that all the films that will open during the traditional fall-holiday Oscar season (and I don’t know how many films this will be)…are you telling me that that distributors won’t engage in Phase One-style promotions and celebrations during this late October to mid December period?

“For 90 years this has been the time for Oscar hullabaloo (10.15 to 12.20), and you can’t just suddenly shut that down and say ‘Oh, no, we’ll be waiting to talk about the Oscar hopefuls in February, March and April.’  You can’t throw in the towel like David Poland and say ‘no 2020 Oscar season action until the late winter and early spring of ’21.’  End-of-the-year Oscar wallah-wallah is in our blood, our genes, our instincts, our history, our traditions, our souls. You can’t just turn that 90-year-old spigot off like that. You can’t throw a nearly century-old tradition out the window.

“It’s therefore my belief or theory that for the first time in award-season history (and hopefully the last time) we’ll have two (2) Phase Ones on the calendar — traditional Phase One A (mid October to late December) and an atypical, one-time-only Phase One B from late January to 2.28.21.  And then, after the nominations are announced, comes Phase Two.

“Please tell me, privately, in what way my thinking might be wrong.”

Hot-Shot Award-Season Player/Contributor/Handicapper to HE: “Things” –i.e., the award season that we all know and love except for crabby-heads like Bob Strauss — “will resume in October-November when we start to have a better understanding of how [the pandemic’s grip on our lives is ebbing or levelling off or whatever].  And once the presidential election has been decided.”

HE to Hot-Shot Award-Season Player/Contributor/Handicapper: “Hah!”