The Orange Plague hasn’t pardoned longtime pally Roger J. Stone Jr., but he’s commuted his 40-month sentence, a result of being found guilty on seven felony charges, including obstructing a congressional inquiry into whether the Trump campaign conspired with Russia to influence the 2016 election.

N.Y. Times: “In a lengthy statement released late on a Friday evening, the White House denounced the prosecution against Mr. Stone on what it called ‘process based charges’ stemming from ‘the Russia Hoax’ investigation. ‘Roger Stone has already suffered greatly,’ the statement said. ‘He was treated very unfairly, as were many others in this case. Roger Stone is now a free man!’

“These charges were the product of recklessness borne of frustration and malice. his is why the out-of-control Mueller prosecutors, desperate for splashy headlines to compensate for a failed investigation, set their sights on Mr. Stone.”

The second half of Max Barbakow and Andy Samberg‘s Palm Springs (Hulu, now streaming), a time-loop wedding comedy a la Groundhog Day, is less irksome than the first half — I’ll give it that.

But even during the second half I only laughed once. Okay, maybe twice. And there are no laughs at all during the first 40 or 45. Plus the central situational incident is a wedding, and I’ve always hated wedding flicks (except, of course, for The Wedding Crashers and Robert Altman‘s A Wedding).

I’d been hearing for months how wildly funny Palm Springs is (Sundance ’20 attendees went apeshit), and how it sold for $17 million and small change. And now there’s the Rotten Tomatoes and Metacritic ratings (94% and 84% respectively). And for all of it I sat on my couch like the Great Sphinx at Giza.

Groundhog Day was dry and deadpan and even nourishing in a mystical reincarnation sense, and all the richer and better for that. It didn’t explain why Bill Murray had fallen into this trap — it just pushed him into the pool and watched him try to figure it all out. But manic-surreal Palm Springs is hung up on all kinds of details and reasons and particulars, and it doesn’t have the slightest semblance of a mystical current. Plus it feels overly pushed and frantic and broad. Groundhog Day is at least 15 or 20 times better.

In the droll Murray role, Samberg has been stuck in the time loop for a long while (the source being some kind of churning inferno inside a cave), but in this outing the Andie McDowell romantic-interest character (played by Cristin Milioti) is also sucked in.

And so, of course, Milioti (whose character is the sister of the bride at the Palm Springs wedding in question) has to go through the usual stages — shock, disbelief, brittle facial expressions, eyes popping, shouting. In my book there are few things as unfunny as looks of stunned confusion — i.e., actors telling you over and over again that they’re staggered and at a loss for words (except for “what the fuck!”) when something extraordinary occurs.

You know Samberg and Milioti will challenge and irritate each other to death, but will fall in love by Act Three.

I understand, of course, that high-concept farce tends to go hand in hand with hammy acting, but this time almost nothing is funny. J.K. Simmons, another time-loop prisoner, shooting Samberg with real, flesh-piercing arrows isn’t funny. Samberg’s character says two or three times that despite the certainty of the same day being repeated that physical pain is nonetheless real, and so Milioti jumping in front of a speeding truck isn’t funny. Her younger sister falling and knocking her front teeth out isn’t funny. Strapping C4 explosive to a goat and blowing it into a thousand shards of flesh, blood, hair and bone isn’t funny.

Most of us are presuming that for age reasons, Joe Biden won’t run for re-election in ’24. Nobody can even spitball who might be the official Democratic president nominee in ’24 (Kamala Harris, Gavin Newsom, Pete Buttigieg, Gretchen Whitmer) but rightwing media seems to believe that Fox News host Tucker Carlson, an instantly recognized brand who’s personable and no dummy, would be a formidable Republican candidate.

44 Comments
“Political Correctness Is The Fascism of the ’90s”

Gene Siskel: “You have to summon the courage to say what you honestly feel [about a film]. And that’s not easy. There’s a whole new world called political correctness going on, and that is death to a critic, to participate in that. Wanting be liked is another…forget even the world of political correctness. Wanting to be liked, wanting to go along with the group [is] death to a critic. [Forget all that and] take your best shot.”

Roger Ebert: “When you said the word ‘political correctness’ it made me think of college students working for the student papers or writing papers that are going to be read out loud in class…political correctness is the fascism of the ’90s. This feeling that you have to keep your ideas and your way of looking at things within very narrow boundaries or you’ll offend someone. Certainly one of the purposes of journalism is to challenge that kind of thinking. And one of the purposes of criticism is to break boundaries. But what politically correct students are training themselves to do today is to lie…to lie.”

HE to Siskel and Ebert in heaven: Those politically correct college students of the late ’90s are now in positions of power and running the show. You wouldn’t believe what’s happening today at the N.Y. Times, for example. And that p.c. culture has become extremely censorious and punitive. They’re meting out punishment to transgressors and contrarians, and the ultimate p.c. punishment is called “cancelling’ — they’ll murder you on a digital platform called Twitter and get you fired if you persist in saying the wrong thing…so in the film realm if you depart from the officially sanctified view of this or that topic according to, say, Guy Lodge or Jessica Kiang, you’ll get beaten up by the mob. You could even be forced to drive for Uber or work in fast food if you’re not careful.

And you know what else? Many of the smartest big-time critics are just going along with this. Because they’re mice…because they’re afraid of standing up. It’s not that different from the Commie witch hunts of early to mid ’50s. [Thanks to Jordan Ruimy for passing along clip.]

Ebert text from heaven, just received: “Let’s say, for example, that you’re not as much of a fan of the great Ennio Morricone as others. That might brand you as being less perceptive than you should be, but you are absolutely entitled to say that without dodging punches.”

“God is silent. Now if only man would shut up.” — Woody Allen.

I forget who said the following, but it’s one of my favorites: “Never say anything unless you can improve upon the silence.” 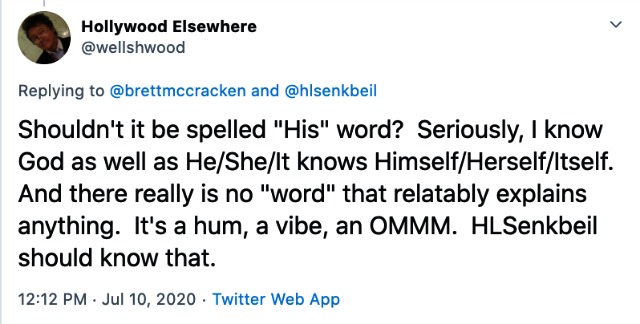 Producer pally: “Why aren’t you reviewing Palm Springs or Relic? Everyone wants to know which new films to watch. You’re getting wrapped up in the dark day-to-day malaise of our limited lives and it’s attracting the very worst from your snarkier readers. I love your column but your joy in reviewing good movies like The Outpost is getting trampled by the anger and bitterness of some posts.

“Your readers come for escape and inspiration. They are looking for some respite from despair. That’s what good movies can do, isn’t it? Don’t forget that part. It’s important.”

HE to producer pally: “Thanks for being a good hombre and a supportive friend. And yeah, escape and inspiration are important. People’s souls need watering but I can’t just turn on the garden hose like Mr. Greenjeans. That’s not how writing works. I have to be true to life in all its burdensome glory and the day-to-day bubble, bubble, toil and trouble AS IT IS, now how you or certain readers might want it to be. I am not a slap-happy escapist — never have been, never will be.

“I just saw Palm Springs last night. And First Cow, finally. Assembling articles as we speak. I wouldn’t watch Relic with a knife at my back.”

24 Comments
Son of Shame In The Lobby

Oldie but goodie, posted on 12.18.06: “Not long ago, the Bagger was at a restaurant event with a major film writer and director and ended up in a booth with him for several hours. He admired the man tremendously, [but] did not like his last project. Finally, the subject came up and the Bagger told the truth, after which there was suddenly very little to say.

“Later, Carr asked an experienced colleague if he, Carr, had been wise to speak his mind. ‘No, that was profoundly stupid,’ he was told. ‘They really don’t want to know the truth.’” — from David Carr‘s “Ten Things I Don’t Hate About You, or At Least Your Movie,” also posted on 12.18.06.

“Carr’s friend was right, but I’ll never forget my initial reaction to Michael Bay‘s Armageddon after an Academy screening in June of 1998. It gave me a headache because of the machine-gun-like cutting. As Variety‘s Todd McCarthy famously said at the time, the pace felt like that of ‘a machine gun locked in the firing position.’ This over-accelerated editing, I was later told, was a result of a deliberate Michael Bay strategy of cutting out as many frames as possible in each scene order to make the film play as fast, hard and compressed as possible — i.e., ‘frame-fucked.’

“In any event, when I saw Bruckheimer in the lobby after the screening I did the usual chickenshit industry thing — I half-lied. I told Jerry that the film ‘rocked’ or felt like ‘rocket fuel.’ (Which wasn’t a total lie — it did feel like that, sort of.) As soon as I said this, however, Bruckheimer cocked his head and gave me a ‘look’. He knew I was snowing him, and I knew that he knew. I felt like a snivelling coward, possibly due to the fact that I was being precisely that. He didn’t look at me for the rest of the evening.

“I later shared this moment with a director friend, and he told me one of his own. A very big (one could use the word ‘legendary’) producer told him that an actress in a scene he was directing was ‘fucking smiling‘ too often, ‘just like fucking Tom Cruise…always smiling, always with the teeth. Tell her to cut it out.’ The director later spoke to the actress, who had seen him speaking with the big-name producer. ‘Did he say anything about me?’ she asked. The director replied, ‘He compared you to Tom Cruise.'”