Except for the wokesters who tried to cancel him over that anger episode he admitted to a year and a half ago. So yes, okay, the wokesters gave Neeson a raw deal, but nobody else.

In Honest Thief (Open Road, 10.9), Neeson is a veteran bank robber who cuts some kind of deal with the FBI. (Nobody but nobody cares what kind of deal.) He’s soon after double-crossed by two corrupt agents, and goes on the run in order to settle the score, blah blah.

The director is Mark Williams, Emmy-nominated producer of Ozark and producer of Ben Affleck‘s The Accountant./ Williams also directed A Family Man, a 2016 Gerard Butler film..

But not in New York or Los Angeles. So if citizens of those burghs want to catch Chris Nolan’s latest, they’ll have to leave town — it’s that simple. Me? I’ll be catching it in Palm Springs.

Indiewire‘s Tom Brueggemann is reporting (or reminding) that Nolan’s film “is scheduled to open in 50 territories between August 26 and 28, including Germany, Canada, the United Kingdom, France, Italy, Korea, and Australia; other major countries like Russia and Japan follow soon thereafter. China’s also approved the film for release, albeit without a date.

Key passage: “In the U.S. today, 45 states permit indoor theaters to operate (with safety precautions) in all or most locations. Because of lack of new product, most have yet to do so. To preclude the September 3 opening, governments would have to shut them down — and that’s much more difficult to do than delaying permission to open. 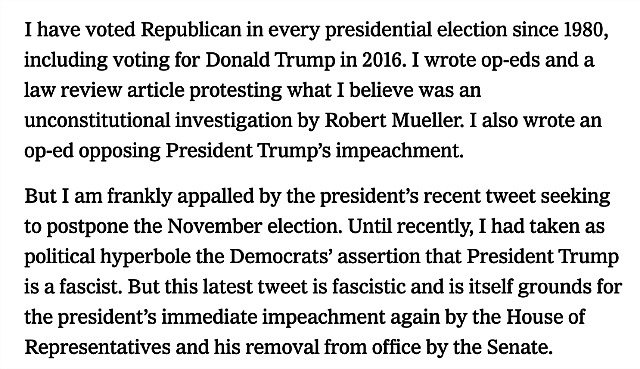 Here’s another creative Steven Soderbergh rehash, this time by way of Steven Spielberg‘s Raiders of the Lost Ark. Apart from the usual de-colorizing, the basic idea is to compel the viewer to re-appreciate (or more deeply appreciate) the staging, cutting and visual choreography. The problem is the deeply annoying soundtrack (allegedly a mix of Trent Reznor and Atticus Ross compositions from The Social Network and The Girl with the Dragon Tattoo). I watched only a few scenes, but even these gave me a splitting headache.

The first, pre-pandemic teaser for Wes Anderson‘s The French Dispatch appeared on 2.12.20. At the time Searchlight’s plan was to premiere it in Cannes and open it on 7.24.20. Now, on 7.31, a full-boat trailer has surfaced but minus a firm release date. Dispatch had been slated for release on 10.16.20 but was pulled from the schedule on 7.23.20.

Posted on 2.12.20: Dense, complex and rife with stylistic pizazz, the trailer for Wes Anderson‘s The French Dispatch (Searchlight, 7.24) conveys some of what the film is about.

What it’s mostly about, basically, are visual compositions of fine flavor and aesthetic precision. In color and black and white, and in aspect ratios of 1.37:1 and 2.39:1 a la The Grand Budapest Hotel.

Also in the vein of Budapest, it’s about a distinctive institution that peaked in the mid 20th Century and then fell into ruin or hard times. To quote my own Budapest Hotel review, it’s “a valentine to old-world European atmosphere and ways and cultural climes that began to breath their last about…what, a half-century ago if not earlier?”

Story-wise, Dispatch is an American journalism film, oddly set in a second-tier French city of the ’50s and ’60s, except nobody seems to speak much French. It’s an homage to a New Yorker-ish publication, but with a Midwestern heart-of-America mindset. It tells three stories of headstrong American journalists reporting and writing about three big stories, one of them having to do with the French New Left uprising of May ’68. Otherwise the historical context…well, I’m working on that.