The trades have reported what they know about the Ron Meyer-Charlotte Kirk curiosity in their usual fashion — forthright, discreet, careful. Richard Rushfield’s discussion of same was more candid in a neighborhood tavern sort of way, and therefore more enjoyable. One of the reasons, etc.

I have this vague impression that wokesters with the major domestic film festivals have been less than fully receptive cool to the established-older-white-guy contingent in terms of festival passes. (Excepting the trade critics, of course.) They — Sundance for one, Toronto for another — seem to be preferring to accredit women critics, younger regional critics, critics of color, LGBTQ critics.

I was famously stiffed by Sundance in ’19, of course, largely thanks to the delightful Scott Weinberg but also the spirit of Maximilien Robespierre. I also didn’t attend Toronto that year.

This year, needless to point out, has been a wash due to Covid. Virtual viewings + drive-in screenings just ain’t the same.

I’m nonetheless surprised to discover that a few younger critics have recently gotten the TIFF brush-off — Jordan Ruimy (World of Reel), Nathaniel Rogers (The Film Experience), @NextBestPicture’s Matt Neglia and Blackfilm‘s Wilson Morales. Bizarre but true. A tweet indicates that even Monica Castillo and Beatrice Loayza were briefly denied a TIFF pass, although these decisions were later reversed.

I’m also hearing that several members of the Toronto Film Critics Association have been denied accreditation.

One dismayed suitor explains that “a lot of people got rejected…their reasoning being that they need to limit the amount of people they accept due to the virtual component of the fest this year, which doesn’t make any sense.”

Morales: “Two publicists went to bat for me and still no luck…not sure what they were looking for, given the years of experience and how much I have covered TIFF in the past.”

Has anyone else of note been stiffed by TIFF?

At least I still have Cannes, Telluride, Santa Barbara and Middleburg in my quiver! 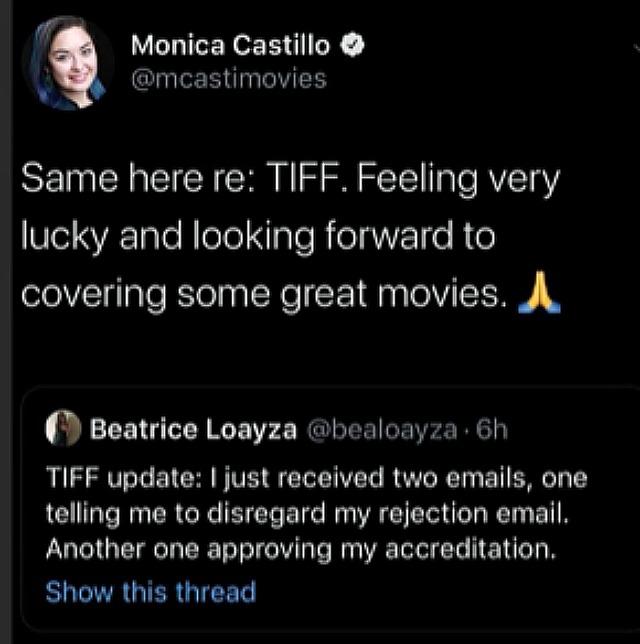 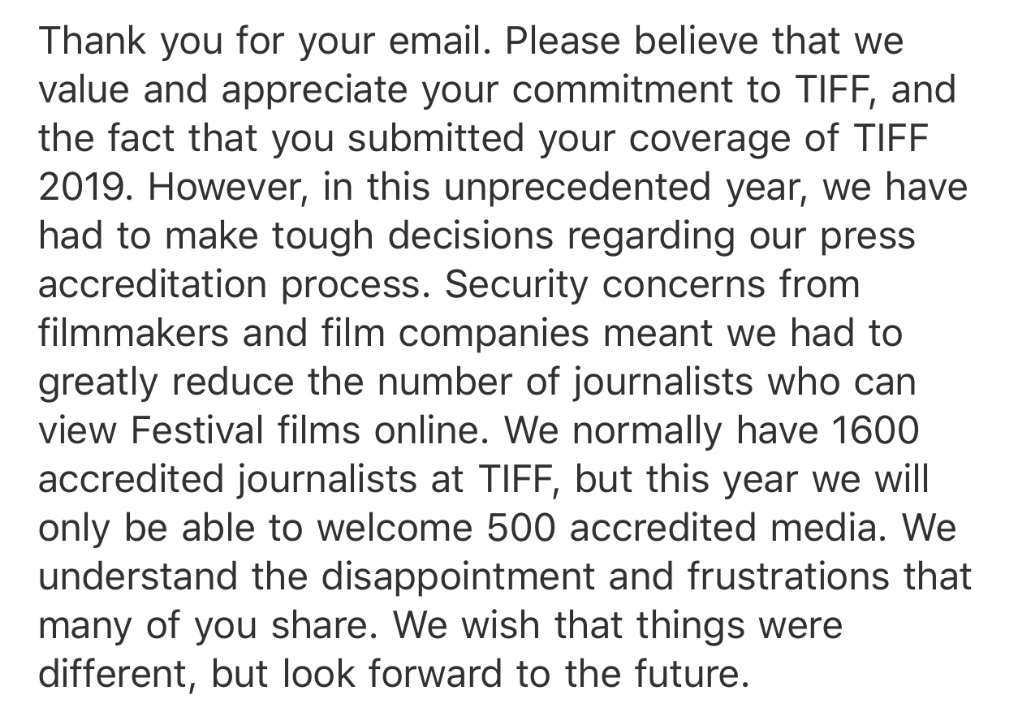 Hats off to N.Y. Times Andrew Blackwell and Taige Jensen for this faux campaign ad (8.27.20).

“And of course Charles, who spent most of his time loitering and waiting to be offended…he was an extremely vulnerable and sensitive soul…he was therefore of course equally open to flattery, and when he heard [the praise of a passing female tourist] he preened.”

I’ve posted excerpts from this “Peter Ustinov recalls the making of Spartacus” interview once or twice since HE’s launch in August ’04. It’s easily one of the best interview or commentary supplements ever offered on any disc of any film, and of course the Charlies Laughton portion (imitations and stories — 8:20 to 15:00) is the highlight.

The 20-minute supplement initially appeared on the 1992 Criterion laserdisc of Spartacus, and again on the 2001 Criterion DVD.

How much could it have cost to include the Ustinov segment? Given the fact that the 480p Criterion versions look atrocious compared to what followed, the only way to savor the Ustinov these days is via YouTube. Had Universal sprung for the license fee the interview would have been HD-upgraded…a shame.

In view of widespread complaints about viewers being unable to understand (key?) portions of Tenet‘s dialogue, this concisely phrased summary by Vulture‘s Christina Newland (“Tenet Is a Locked Puzzle Box With Nothing Inside”) might be worth storing on your smartphone’s notepad:

“John David Washington, known only as The Protagonist, is brought into a top-secret cabal working to stop the literal destruction of the planet through means of an ‘inverted’ bomb. That is to say: In this world, objects and, it turns out, people can actually exist on two planes, moving both forward and backward through time, simultaneously. This dynamic can be manipulated, and some very bad people know how to do so — namely Andrei Sator, played by a silly-accented Kenneth Branagh as a Bond-villain-esque Russian mastermind.

“At least initially, this ‘temporal inversion’ is a generous platform for plot trickery and an even better one for action sequences. Bullets surge backward, like the gun is swallowing them; hand-to-hand combat is on rewind and fast-forward; explosions can be funneled back into their bombs. This means a lot of grinding, inventive sound design, as wind moves in the wrong direction and debris flies in reverse; the soundtrack is accordingly and throbbingly unpleasant. Its efficacy is hard to deny.

“The Protagonist and his British compatriot Neil (a foppish Robert Pattinson) fight their way through London, Mumbai, and numerous other far-flung locales by way of arms dealers and art forgeries in order to find and entrap their man, eventually looping back in on themselves in multiple situations.” 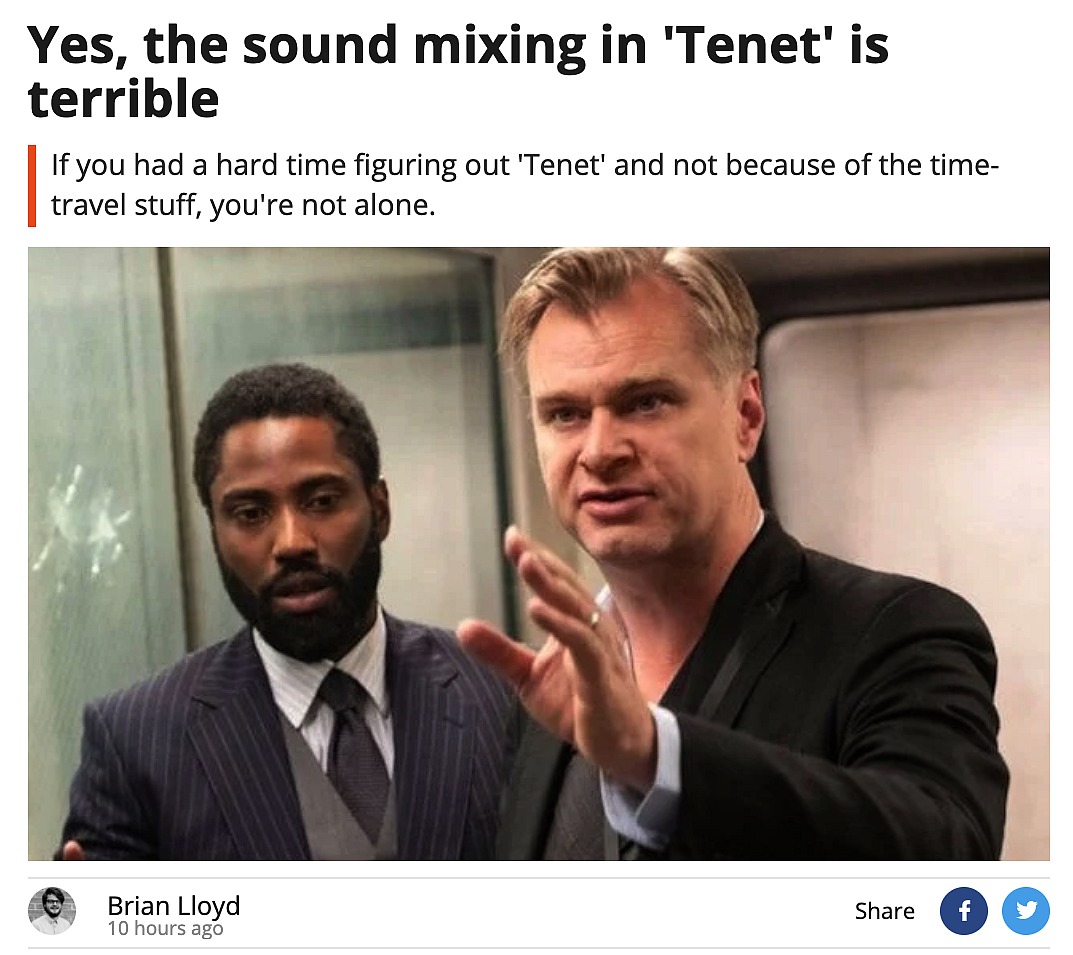 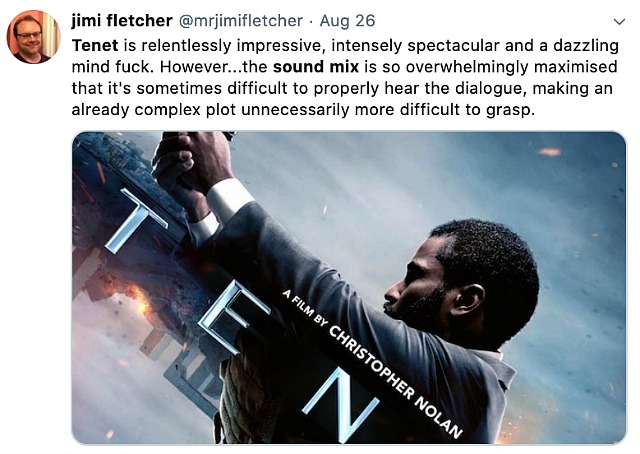 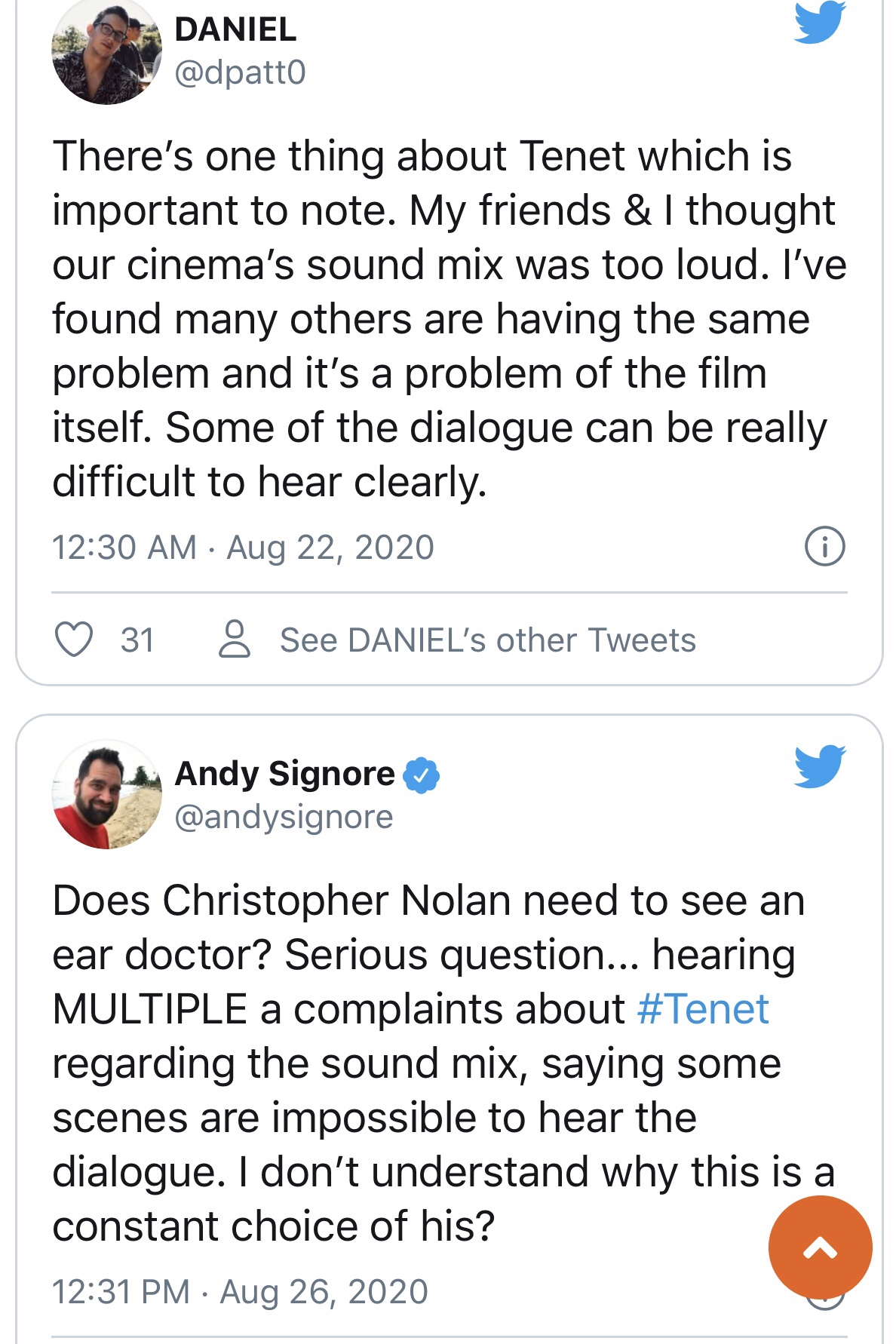 “Burn it down” anti-racism agitators have done an excellent job so far. They’ve almost certainly persuaded tens if not hundreds of thousands of American voters to consider the unthinkable and re-elect Donald Trump, not because they admire that animal or believe he’s out for anyone but his own criminal self but because of LAWNORDER…because he’s committed to stopping the daily chaos — burnings, beatings, goadings, shootings, smashed windows, arrests, tear gas.

But the mob has to push harder. A few cities — Kenosha, Portland, Seattle, Chicago, New York, Los Angeles — won’t do it. They need to ignite all the major burghs. A huge dark cloud needs to spread over the entire nation. The scent of rage and violence has to fill everyone’s nostrils.

Do wokester militants want Trump to win or don’t they? Because half measures won’t accomplish that.

Quoting rightwing N.Y. Post columnist Michael Goodwin is a deeply uncomfortable thing for me, but portions of an 8.27 column (“Joe Biden finally breaks silence on urban violence, too late“) are hard to argue with.

“Democrats made what I believe to be a historic error in failing to say a single word — a single word — about the national urban crisis during their convention last week,” he wrote. “They said nothing about the violence and the tent cities of homeless popping up everywhere, yet…frequently criticized the police and romanced protestors as a new wave of selfless heroes.

“But what the nation is witnessing is not protest and it is certainly not heroic.”

“I think Democrats are ignoring this problem, are hoping that it will go away,” Lemon mentioned at the beginning of his Tuesday night show. “And it’s not going to go away.”

“So the problem is not going to be fixed by then, but what they can do, and I think maybe Joe Biden may be afraid to do it. I’m not sure, maybe he won’t, maybe he is. [But] he’s got to address it. He’s got to come out and talk about it.”

Biden finally addressed the chaos yesterday, but it took him long enough. And he can’t let it go at that.

More eerie than scary and captured in bluish gray hues by Cold War dp Lukasz Zal, it goes from oddly unnerving and “wait a minute” to “wait, what?” And not incidentally because of an allegiance with Richard Rodgers and Oscar Hammerstein‘s “Oklahoma!“, and without a single shock cut.

I was going to describe it as a macabre Meet The Parents but naahh. Kaufman’s film isn’t really “like” anything but itself and the same-titled 2016 Iain Reid book it’s based upon. But if you insist Buckley has the Ben Stiller role.

It’s well constructed and pays off with a twist, but for me I’m Thinking of Ending Things is a subdued horror fantasy about the grayness and drudgery of downish, diminished lives in gothic Middle America…propelled by inventive, oddly compelling performances from the four leads…a relationship flick that has nowhere to go but into the cellar of despair and “the pit of man’s fears” a la Rod Serling.

For me, this is a film that asks “how much did you hate the tortures of high school and your dreary upbringing? And can you ever escape those influences?”  On one level Thewlis and Collette could be horror-film characters but on another they’re everyone’s mom-and-dad nightmare, everything you want to escape from but at the same time are drawn to or at least stuck with.

Have I mentioned that Kaufman applies his low-key surrealism with remarkable confidence?  But it doesn’t give in to that. It builds into something else.

Being somewhat familiar with Reid’s novel, I was aware going in that “something else” alludes to the realm of unreliable narration and characters having the same thoughts and in fact being even closer than the reader might first imagine, etc. But to me this aspect seemed more distracting than illuminating, and so I chose to more or less ignore it.

Does the film deliver too much in the way of Kaufman-esque downerism? Not this time.  The same currents of resignation and despair and self-loathing that permeated (to varying degrees) Being John Malkovich, Eternal Sunshine of the Spotless Mind, Adaptation, Synecdoche and Anomalilsa?  Yes, but this time with an extra dimension.

I’m talking about a surreal third-act blending with the lore of “Oklahoma!” and particularly the dream sequences and Agnes de Mille’s choreography and how it all meshes into a final mind-bending whole with a snow-covered car and frozen sheep, a dead pig or two and a sad 70something high-school janitor…that’s all I’m saying.

I felt disturbed, transported, creeped out and yet oddly amazed. How many films are this unusual, this creepy, this what-the-fuck and yet strangely harmonized?

It’s a melancholy dreamscape piece that goes for broke and swings for the fences and pulls off an amazing synthesis.