Support on Patreon Follow @wellshwood
98 Comments
Redmayne Steps In it

Nearly four months ago J.K. Rowling landed in hot water when she said the wrong thing about transgender folk. She stated that “if sex isn’t real, the lived reality of women globally is erased…I know and love trans people, but erasing the concept of sex removes the ability of many to meaningfully discuss their lives.” The blowback was harsh; her remarks were derided as transphobic.

Now Transgender Twitter wants Eddie Redmayne punished also. Because four days ago the costar of The Trial of the Chicago 7 and two Fantastic Beasts films told the Daily Mail‘s Baz Bamigboye that while he disagreed with Rowling’s comments, he was alarmed by the “vitriol” she received on social media, which he called “absolutely disgusting.”

Redmayne added that ugly remarks about trans people are “equally disgusting,” but the “vitriol” remark was all anyone heard. 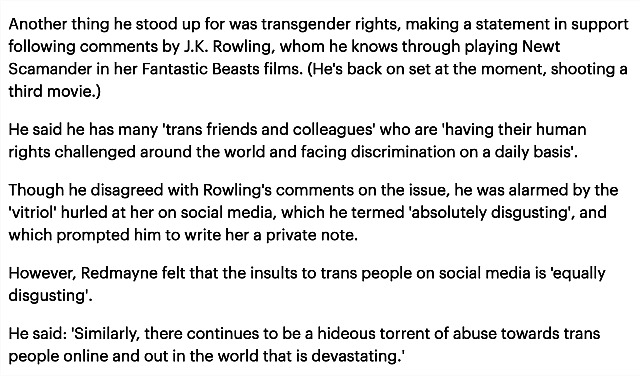 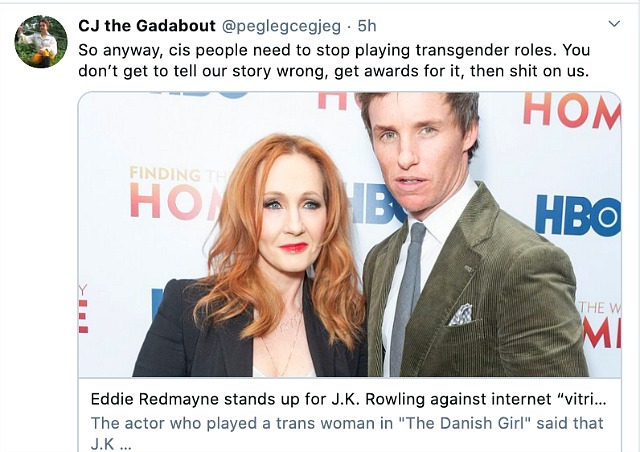 A 9.8.20 538 piece by Perry Bacon, Jr. says that “polls suggest about 10% of black voters both nationally and in key swing states with large black electorates are supporting Trump.”

I’m wondering if these voters will care one way the other when they read the recently surfaced story from England’s Channel 4 News?

The authors claim to have “exclusively obtained a vast cache of data used by Donald Trump’s 2016 presidential campaign on almost 200 million American voters, and that “it reveals that 3.5 million Black Americans were categorized by Trump’s campaign as ‘Deterrence’ – voters they wanted to stay home on election day.”

Excerpt #2: “Civil rights campaigners said the evidence amounted to a new form of voter ‘suppression’ and called on Facebook to disclose ads and targeting information that has never been made public.

“The ‘Deterrence’ project can be revealed after Channel 4 News obtained the database used by Trump’s digital campaign team — credited with helping deliver his shock victory to become president four years ago.

Excerpt #3: “Vast in scale, it contains details on almost 200 million Americans, among more than 5,000 files, which together amass almost 5 terabytes of data — making it one of the biggest leaks in history.

“It reveals not only the huge amounts of data held on every individual voter, but how that data was used and manipulated by models and algorithms.

The below photo from David Fincher‘s Mank was presented exclusively a few hours ago by Empire. At left is Gary Oldman as Citizen Kane screenwriter Herman J. Mankiewicz, Tom Pelphrey as “Mank’s” younger brother Joseph L. Mankiewicz is center, and a nondescript mystery actor as “a junior production aide”, standing side by side on an MGM studio soundstage.

Empire‘s Ben Travis: “Fincher requested ‘Gary au naturel’ for his tale about the making of a Golden Age masterpiece, which offered the actor a challenge.

“’I thought, ‘Oh, fucking hell!’,” Oldman tells Empire. ‘I can’t remember the last time I did that. I’ve always got something! I was thinking, ‘I don’t know about that.’ I don’t look anything like Mank. There’s a similarity with [Tom Burke as] Welles and Amanda Seyfried] kind of looks like [film star and Hearst’s lover] Marion Davies, and you’ve got this pale make-up on Charles Dance, so he resembles [William Randolph] Hearst. But I didn’t have anything I could anchor to.

“Then, once we started, I thought, ‘Yeah, Dave was right.’ No tricks. No nothing. Just: here it is. I’ve embraced it.”

We all read a few weeks ago about Trump campaign consultant/advisor Brad Parscale, 44, being demoted from his previous position as Trump’s 2020 campaign manager after the Tulsa debacle. But what could be bothering the poor guy to the extent that his wife, Candice Blount, felt compelled to call Fort Lauderdale cops about his erratic behavior and threatened self-harm?

Wiki excerpt: “Parscale was hospitalized on 9.27.20 after his wife told Fort Lauderdale police that he had guns and he was threatening to harm himself. An officer reported that “Bradley’s speech was slurred as though he was under the influence of an alcoholic beverage and he seemed to be crying.”[ Officers seized 10 firearms from the home and reported that Parscale’s wife had cuts and bruises on her arms and face, which she said Parscale had inflicted earlier in the week. Parscale was detained under terms of the Baker Act.”