Whatever happened to The Challenger, that Michelle Williams-as-Christa McAuliffe feature about the 1986 space shuttle tragedy that was announced in October ’18? At one point it was going to shoot in May ’19. Land of Mine director Martin Zandvliet would’ve directed, based on a script by Jayson Rothwell.

Wiki excerpt: “Some experts believe most if not all of the crew were alive and possibly conscious during the entire descent until impact with the ocean. Astronaut and NASA lead accident investigator Robert Overmyer said, ‘I not only flew with Dick Scobee, we owned a plane together, and I know Scob did everything he could to save his crew. Scob fought for any and every edge to survive. He flew that ship without wings all the way down…they were alive.'”

As far as my sensibilities are concerned, Joe Mantello‘s forthcoming Netflix version of The Boys in the Band (9.20) is about one thing — i.e., the battle of the Emorys. The challenger, Robin de Jesus, vs. the reigning champion, Cliff Gorman. All other considerations are secondary.

Woody Allen‘s Rifkin’s Festival is about (a) a couple who both cat around on each other (i.e., fall for someone else) while attending the San Sebastián Film Festival and (b) the same four people, in the midst of this romantic adventurism, talking, thinking and behaving like Woody or, you know, quintessential Woody characters. 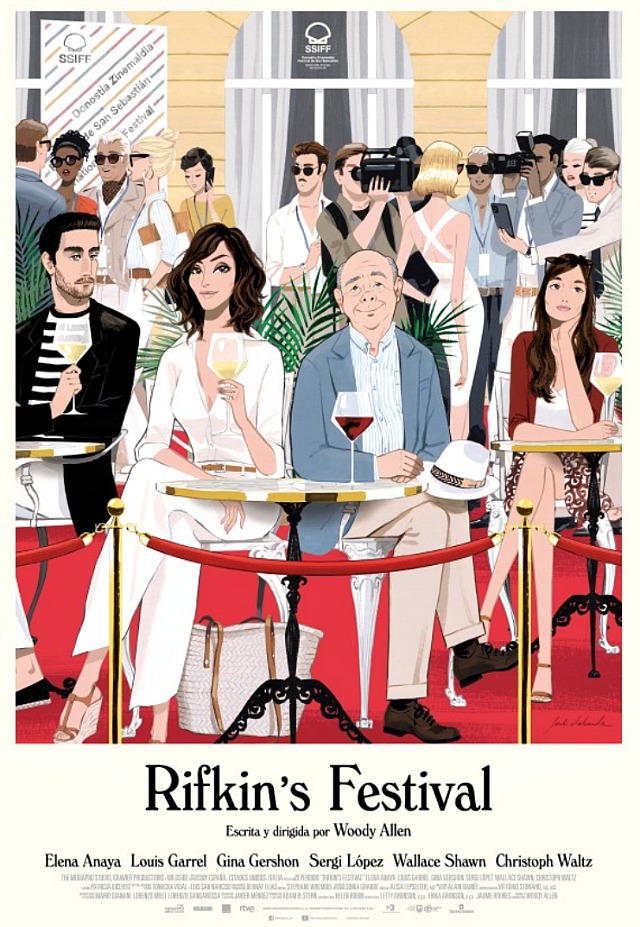 38 Comments
Way It Probably Is

Not that much movement — be honest.

Posted less than an hour ago:

It’s one thing to say “I’ve never seen Johnny Guitar” or “I was exasperated by Stephen Frears‘ The Hit” or “I’ve never bothered to watch Three Days of the Condor.”

But it takes confidence, character and sand for a Variety columnist to say “I’ve never seen Casablanca.” That, ladies and germs, is called exposing your soft underbelly, and I admire any critic or columnist who does that on occasion. So here’s a toast to Clayton Davis, who’s posted his debut column.

That said, I have two disputes with Davis’s 9.2 essay, which is titled “How I’ll Be Predicting the Oscars for Variety.” Okay, not “disputes” but raised eyebrow reactions. Both, in a sense, are about the embrace of fair-minded, bend-over-backwards positivism.

Davis riff #1: “I’ve seen the grotesque districts of the internet in the form of message boards, comment sections and #FilmTwitter. We’ve seen and heard the noise and vitriol from all of them. Trolls and bot-like beings hiding behind a keyboard and throwing out vile descriptions of the subject being discussed. My objective in this space is to be as positive as possible with my casual moviegoers, celebrities and journalistic colleagues. How difficult can that be?”

Something in me goes “uh-oh” when I hear the phrase “try and be positive.” That sounds to me like a blend of “put on a happy face”, “I want to be happy” and “always look on the bright side of life.” All three are song titles, of course, but only the last, a Monty Python tune that was famously covered by Art Garfunkel, is ironically positive-minded. My basic motto is “never trust anyone who tries to put a positive spin on anything.” ** Because the hardest thing in the world is to be straight-from-the-shoulder but fair.

Davis riff #2: “In some ways, a pocket of the population might categorize me as ‘basic’ when sharing my top three films of all time: Dead Poets Society, Forrest Gump and Star Wars Episode V: The Empire Strikes Back. In other ways, my 10 favorite films of all-time also include Dial M for Murder from Alfred Hitchcock, the masterpiece of his career that no one mentions enough.”

It’s fine to champion Dead Poets and especially Empire, the universal consensus fave of all the Star Wars films, largely because it’s the only shadowy “noir” in that decades-spanning franchise. And I’ve long admired the way Hitchcock shot and cut Dial M for Murder (which I saw twice in a 3D boxy presentation at Manhattan’s Eighth Street Playhouse in ’80), because it manages to be visually gripping without ever leaving Ray Milland and Grace Kelly‘s apartment.

Posted in October ’08: “I have a still-lingering resentment of that film, which I and many others disliked from the get-go for the way it kept saying ‘keep your head down’, for its celebration of clueless serendipity and simpleton-ism, and particularly for the propagandistic way it portrayed ’60s-era counter-culture types and in fact that whole convulsive period.

“Every secondary hippie or protestor character in that film was a selfish loutish asshole, and every man and woman in the military was modest, decent and considerate. These and other aspects convinced me that the film was basically reactionary Republican horseshit, and led me to write an L.A. Times Syndicate piece called ‘Gump vs. Grumps,’ about the Forrest Gump backlash.

In response to the above an HE reader named “hcat” said the following: “I have the same problem with Gump. While it flows well and is quite funny throughout, I hate the way it continually rewards Forrest for his stupidity and punishes Jenny for her exploration.

“What especially irks me is the fact that it criticizes the counter-culture and the hippies, but cues up their music every time they need a quick nostalgia hit. Forrest is a country boy and the soundtrack should have been wall to wall Oak Ridge Boys. But that way I can’t imagine it being anywhere near the hit it was.”

** Unless it’s an assessment of myself or Hollywood Elsewhere. In which case I heartily applaud positivism.

I’ve always avoided staying at Goulding’s Lodge in Monument Valley — storied history and great location but a bit too pricey for just a bland motel room. But Mexican Hat, where we stayed last night [Tuesday] and where I’ve bunked a couple of times previously, has been decimated by the pandemic. Relatively few visitors, no wifi, the color and vitality all but disappeared. So screw it — we’ve decided to move to Goulding’s later this morning. You only live once.

Deadline‘s Todd McCarthy: “You should go out to John Ford Point and take some snaps. The Gouldings, who homesteaded there in the 1920s, set up the trading post and eventually opened the lodge, drove their jalopy to Hollywood in the late ’30s to try to attract some Hollywood interest in filming there in order to raise some money for the locals. They somehow got in to see [producer] Walter Wanger, who brought Ford in to look at photos the Gouldings had brought along. The rest is history. With the Depression still on, just the short time the Stagecoach crew shot there helped the local economy considerably. 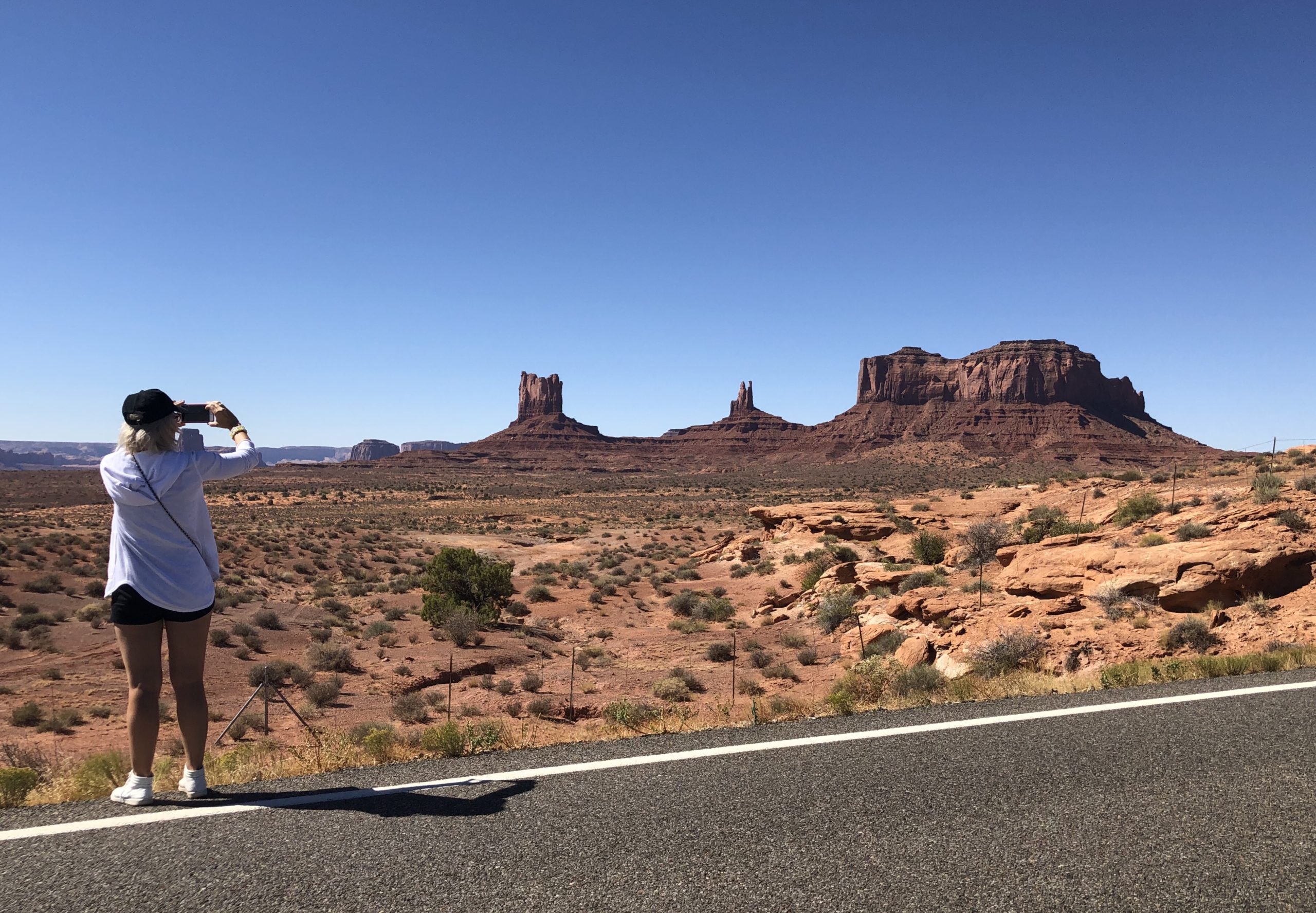 “John Huston had some good stories about having visited there in the early ’30s.

“Of course no one living there now, including the people who run the lodge, knows anything about the Gouldings.

“I went there many times from the mid ’70s through the ’90s, and there were always far more foreign tourists there than Americans — first the French, then Italians and, at one point, Russians. The last time I was there, maybe 10 years ago (the food was terrible!), it was overrun by Japanese. For years there was a religiously affiliated hospital tucked into a little ravine just around the side and back from Gouldings, but for reasons that were never clearly explained to me they were asked to leave some years back, which was unfortunate for health care reasons.

“One indelble memory I have, probably from about 20 years ago, is being on the north side of the Valley in the shadow of one of the big buttes. It’s utterly still and quiet, but then I hear a roar, just a low distant rumbling at first that gradually becomes louder and louder until it feels like something is right on top of me. But I can see nothing. Then suddenly, from over the top of the butte roars a B-52 at probably no higher than 300 feet. Absolutely petrifying. Have no idea what the hell was going on, why it was flying so low or what it was doing around Monument Valley in the first place. Utterly surreal.

“Have a great time!” 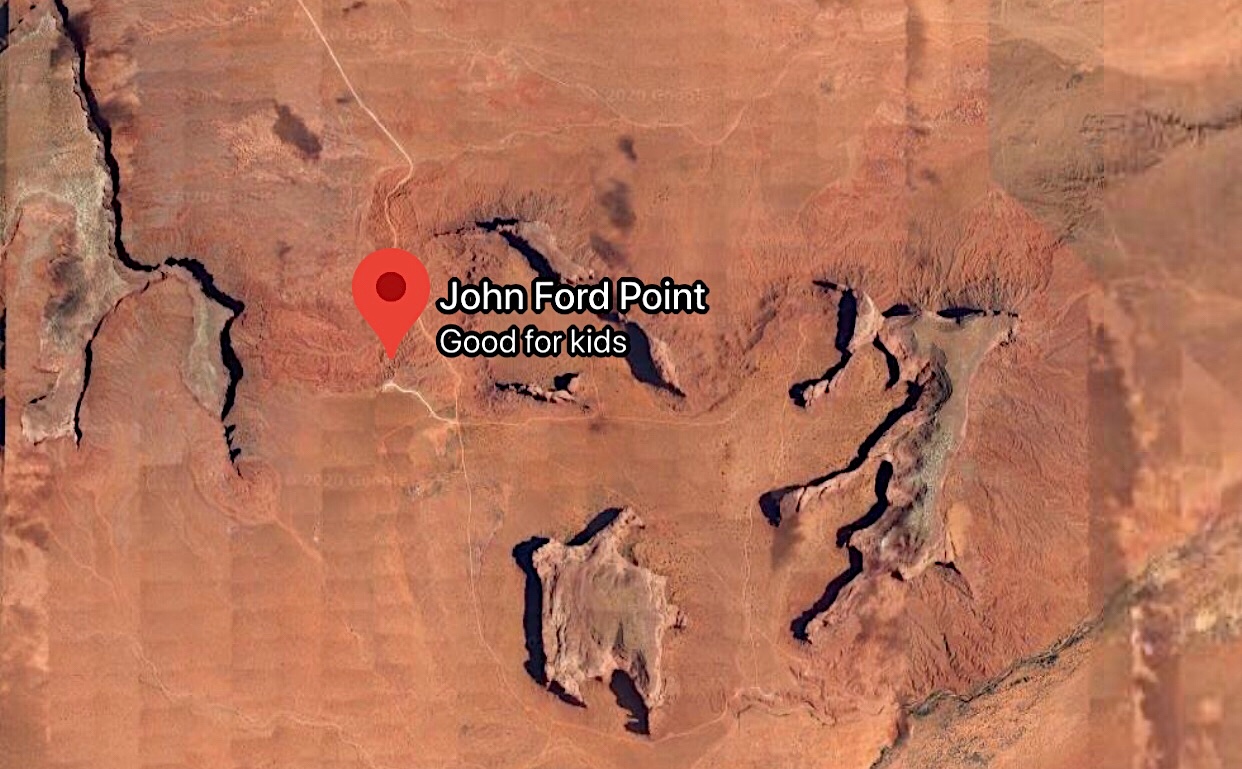 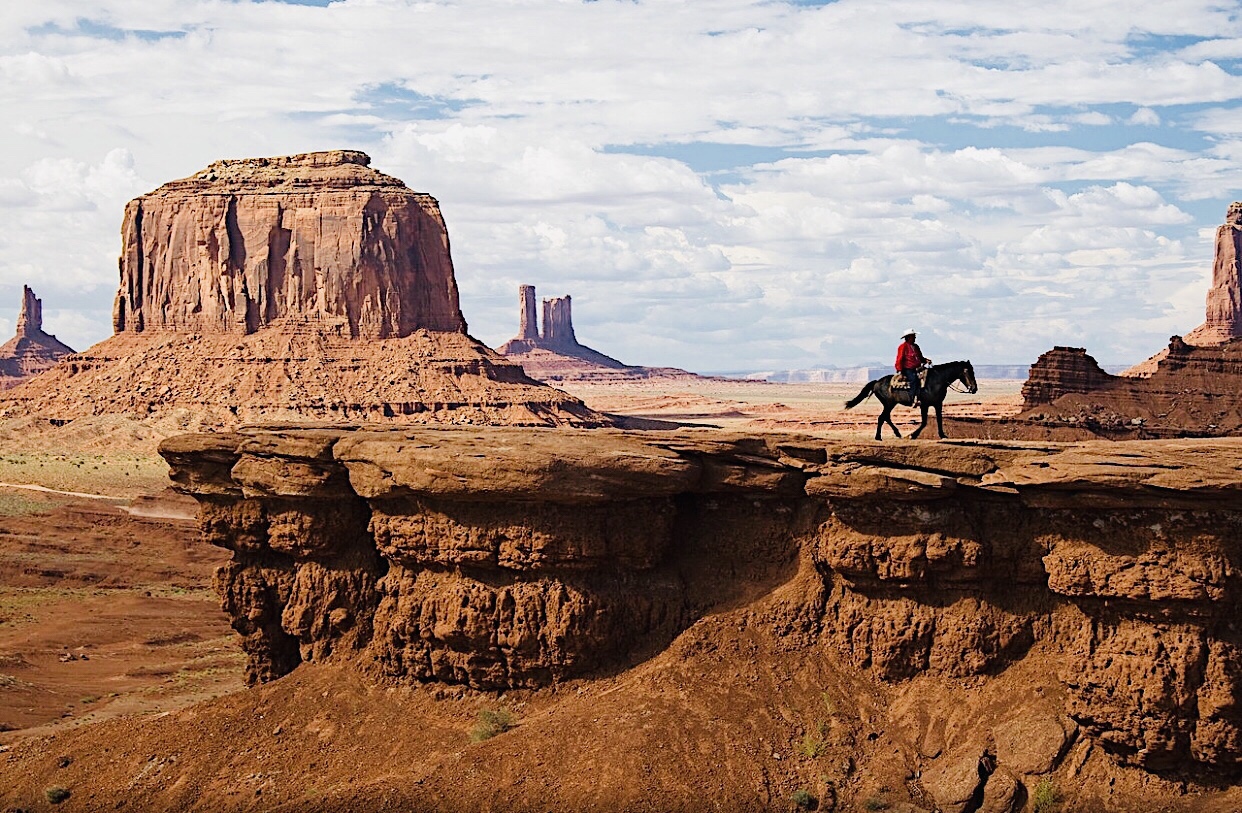 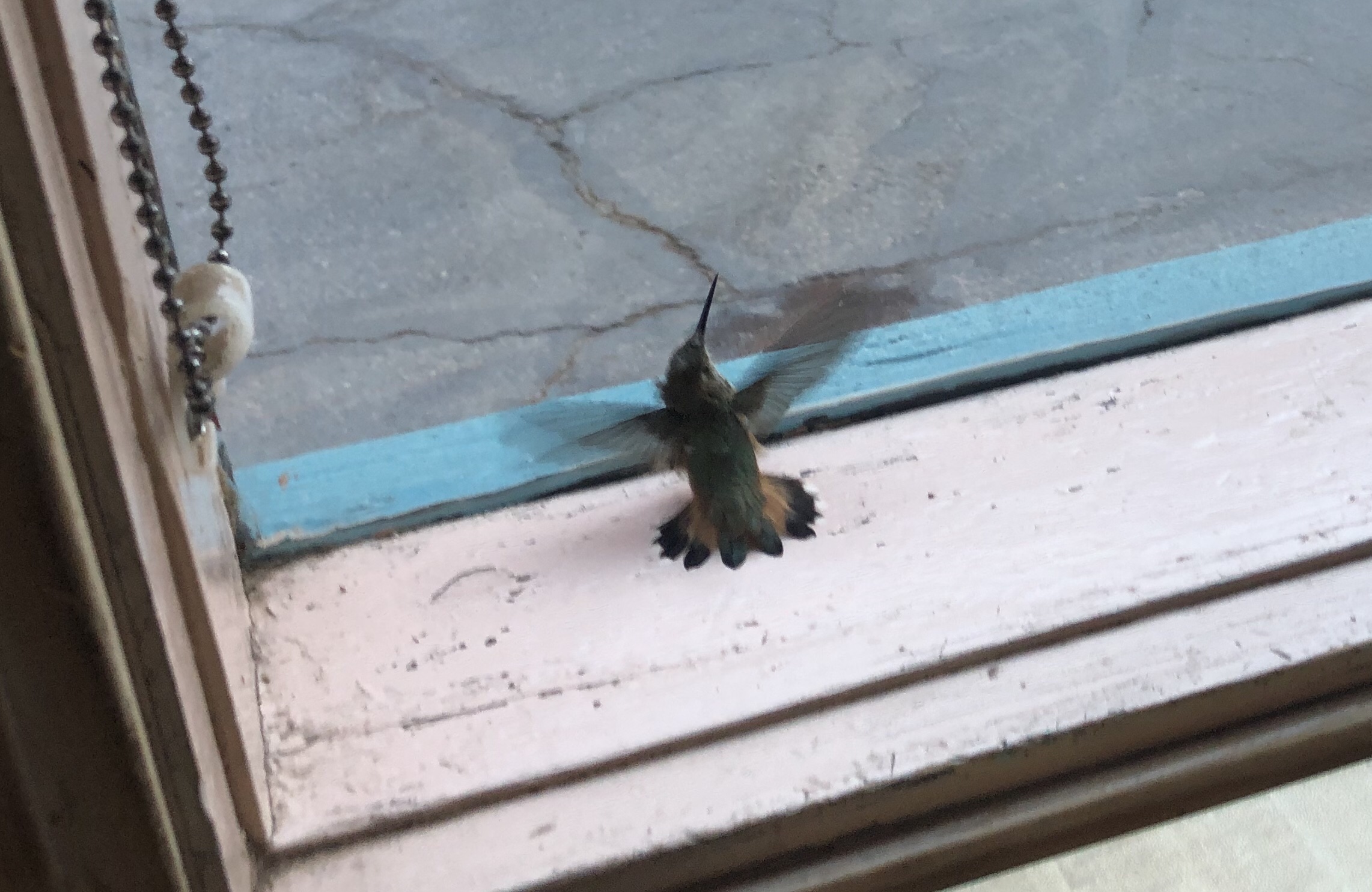 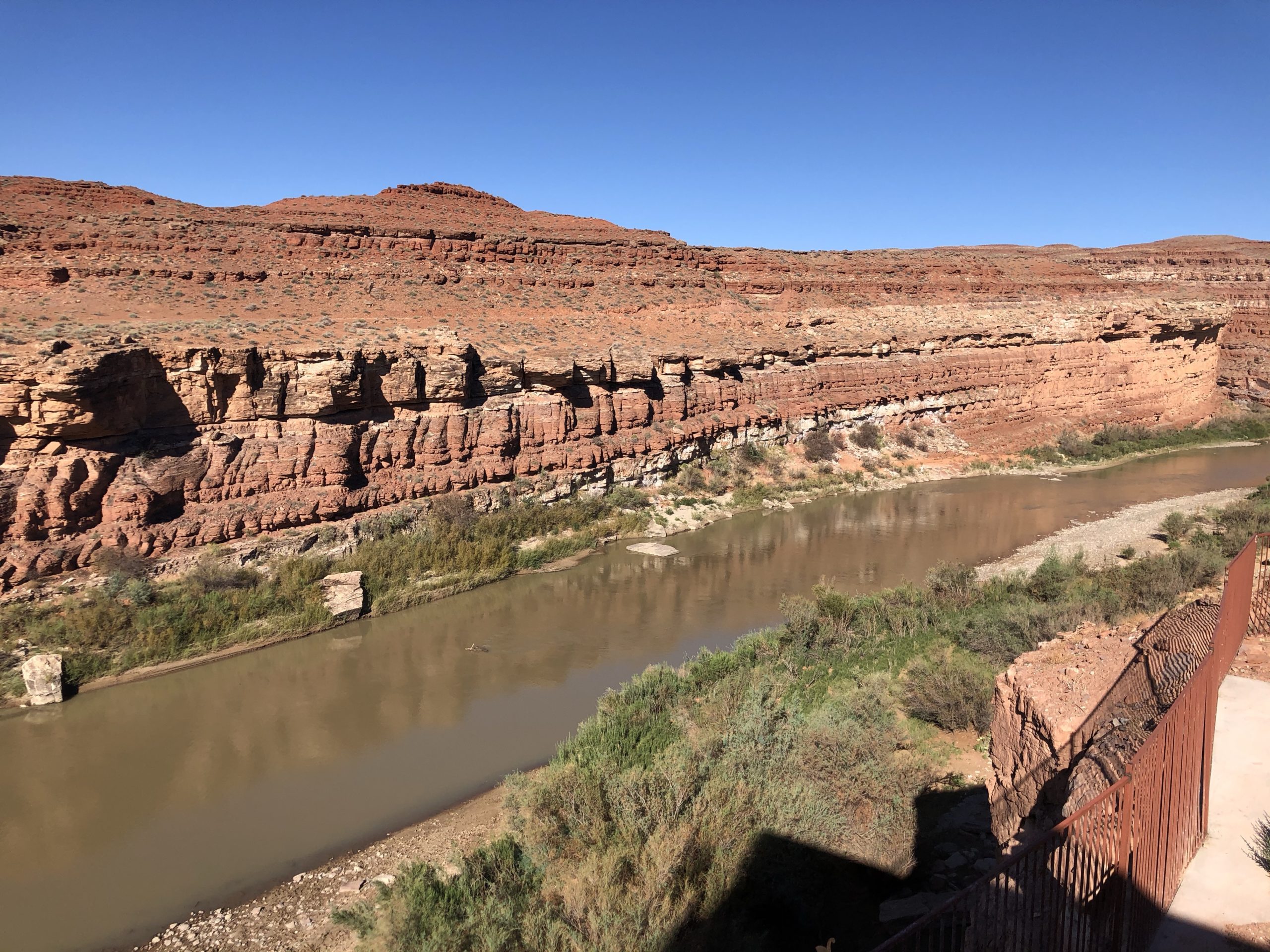 I couldn’t file today (Tuesday, 9.1) because we got up at 5 am and hiked all morning, and then we returned to the Jacob Lake Inn for a fast snooze which turned into a two-hour hibernation. For me, I mean. Tatiana can’t nap.

At 4pm we impulsively decided to shift gears and head for Monument Valley. We arrived around 9 pm this evening. What with errands, unpacking and general driving fatigue we crashed at 11 pm.

The San Juan Inn in Mexican Hat has turned its wifi signal off to save money. (“Covid!”). I tried to utilize my phone as a hot spot, but that barely worked as the local 3G signal hardly exists. It took three attempts to post this.

A sunset-hour horse ride will be tomorrow’s highlight. We’re meeting the guide at Forrest Gump Hill at 4:30 pm.

What did I miss?