A “fatigued” Donald Trump has been flown to Walter Reed military hospital after last night’s COVID-19 diagnosis. Mild fever, cough, chills, stuffed up. This is due to an excess of caution, which of course means that his situation is probably a bit worse than they’re letting on. Trump will stay there “a few days” and will work from the hospital’s presidential suite, blah blah. They’re saying he weighs 240 pounds — not a chance. My guess is 260, 270…somewhere in there.

I don’t want him dead. I want him alive and alert and facing the likely reality of 11.3. I want him to feel the drip-drip-drip of defeat and repudiation.

This is incredible commentary from Fox News’ Chris Wallace about Trump’s coronavirus prognosis. Just wait for it. pic.twitter.com/LS3EhetGSi

Yesterday I finished watching Billy Ray‘s The Comey Rule (Showtime), which is not a miniseries but a two-parter, and a highly absorbing one at that. Take no notice of the 64% Rotten Tomatoes rating and the corresponding 58% Metacritic score. Because it’s good, and by that I mean good enough. More than that actually. If you don’t go looking for God or salvation or cosmic happiness you’ll be completely fine with it. Ray has directed and written in a professional, first-rate fashion.

I can only conclude that the critics who panned it aren’t reviewing the show as much as venting fury at what Comey did to Hillary Clinton and in fact the whole country when he announced on 10.28.16 that the FBI was reopening an investigation into her emails because of Anthony Weiner’s laptop (which was a terrible call on his part). I, on the other hand, am reviewing the show, and I’m telling you it’s not a problem.

The Comey Rule may not be the most profound or earth-shaking dramatization of a recent, real-life Washington melodrama, but it’s good enough. I wasn’t expecting an imaginative or mind-bending revisiting of the former FBI Director‘s saga between his 2013 appointment and 2017 termination (who would want that?), but a taut and exacting one. This is exactly what you get. I was hooked from start to finish.

What I was mostly looking for was (a) efficient writing and (b) skillful performances from the various players, and in these realms I was wholly satisfied.

Yes, that includes Brendan Gleeson‘s reanimation of Orange Plague. Does he deliver the greatest impression of Trump ever seen or imagined? No, but he’s suitably menacing. Is he trying to be funny like Alec Baldwin? No, but he’s vaguely hilarious anyway. I also found him convincing as far as it went. Gleeson is perhaps a little more satanic than the Real McCoy, but nonetheless a good guy to have around, and I mean that in the sense that Gleeson really means it.

As Comey, Jeff Daniels delivers the fundamental decency and cautiously bland rectitude. But God, this is exhausting…how can I deliver assessments of 20 or 25 performances, all of them decent and more than a few arresting or even fascinating? I’m drowning just thinking about it. Holly Hunter‘s Sally Yates…a little too cornpone but that’s Hunter for you. Michael Kelly as Andrew McCabe — perfect. Jennifer Ehle as the savyy, strategic, Hillary-supporting Patrice Comey — ditto. Scoot McNairy is dead-on as the chilly but curiously naive Rod Rosenstein.

Jonathan Banks as James Clapper, Steven Pasquale as Peter Strzok, Oona Chaplin as Lisa Page, Amy Seimetz as Trisha Anderson, Steve Zissis as Jim Baker…as good as they could possibly be, in the zone, pocket drop.

The theatrical opening of No Time to Die aka Bond 25 has been postponed until April 2, 2021. This is the fourth or fifth postponement…actually I’ve lost count. The original plan was for a November 2019 debut, and then it was February 2020, and then April 2020 and then 11.20.20 due to Covid, and now this latest shift. Call it five. Forget theatrical until next year or until a vaccine.

Variety excerpt: “The decision to move the upcoming Bond entry into next year is not entirely surprising considering New York and Los Angeles, the two biggest U.S. markets, are closed and coronavirus cases in Europe have started to rise again. Given Bond’s global appeal, the sequel’s backers wanted to wait until audiences across the world felt safe returning to theaters,” blah blah. 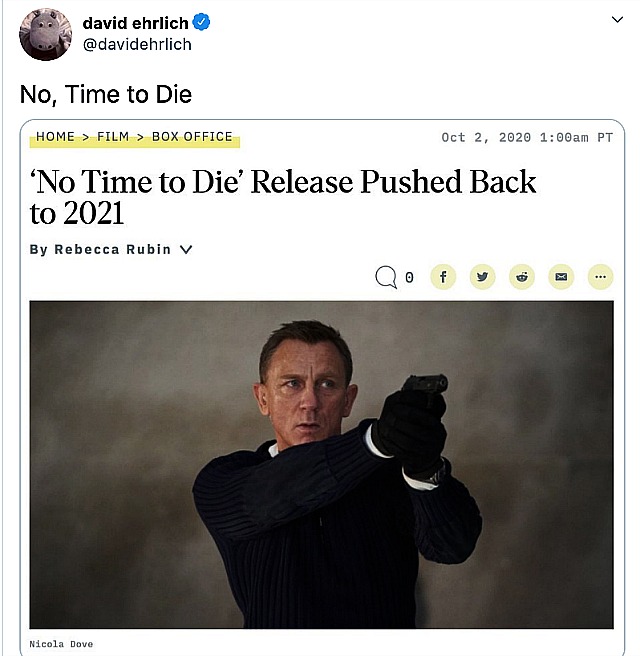 Trump's mistake was getting tested. If he hadn't been tested, he'd be fine now.

The Witches (HBO Max, 10.22) ) is an oppressively broad, diabolically unsubtle “fantasy comedy” based on Roald Dahl‘s 1983 novel of the same name. (In 2010 I visited Dahl’s home in Great Missenden, England — a magnificent spread but the room in which Dahl wrote was in a small, vaguely musty cottage behind the main house.) Directed by Robert Zemeckis, and co-written by Zemeckis, Guillermo del Toro and Kenya Barris. Starring Anne Hathaway, Octavia Spencer, Stanley Tucci and Jahzir Kadeem Bruno (i.e., the kid who gets turned into a mouse). Chris Rock narrates.

Joe Biden has tested negative for the coronavirus. The Democratic presidential nominee and his wife were tested earlier today. Dr. Kevin O’Connor soon after released the negative results in a statement issued by the Biden campaign. Biden was on the debate stage with Trump for more than 90 minutes earlier in the week. “I’m happy to report that Jill and I have tested negative for COVID,” Biden tweeted “Thanks to everyone for your messages of concern. I hope this serves as a reminder — wear a mask, keep social distance, wash your hands.”

“Jill and I send our thoughts to President Trump and First Lady Melania Trump for a swift recovery,” he added. “We will continue to pray for the health and safety of the president and his family.”

Joe & Jill’s well-being aside, the second presidential debate — set for Thursday, 10.15 at the Adrienne Arsht Center for the Performing Arts in Miami — will almost certainly be cancelled. Unless, of course, Trump isn’t feeling too badly down the road and they want to do it on Zoom.

Trump is reportedly experiencing “mild” symptoms. Given the knee-jerk lying instinct of Trump and his handlers, it’s at least possible that he’s faring worse than they’re letting on.

NBC News excerpt: “The next five to 10 days will be critical for President Donald Trump after his positive test for Covid-19. Doctors warn the illness can suddenly worsen after several days of relatively mild symptoms. That’s particularly true for patients with two of the biggest risk factors for serious and even life-threatening complications of the disease: obesity and older age. Trump, who is 74 and has a body mass index of 30.5, qualifying him as obese, fits both criteria.

“I’m worried,” Dr. Vin Gupta, a pulmonologist and an affiliate assistant professor at UW Medicine in Seattle, said Friday on NBC’s Today. “I’ve cared for several patients with that double whammy. If they become sick, if they are symptomatic, they can escalate quickly to needing ICU care.”

Hollywood Elsewhere joins the world in extending best wishes to Rick Moranis after he was randomly attacked in New York City early yesterday morning. Seriously, I’m glad Moranis wasn’t hurt too badly. The 67 year-old actor was slugged and shoved by a youngish dude of color wearing a black “I Love NY” sweatshirt. Moranis reportedly went to a hospital for observation before reporting the assault at a local police precinct.

…wasn’t such a bad guy after all. A long time ago I regarded him as an uptight, scowling, hippie-hating asshole but now…