In all fairness or likelihood, Glenn Close will almost surely be nominated for her performance as an old-school, decent-hearted Kentucky grandma in Ron Howard‘s Hillbilly Elegy (Netflix, 11.24). Several times nominated before (and especially deserving of a win for her performance in 2018’s The Wife), never won. Alas, the naysayers (not against Glenn but the film or more precisely the trailer) are already assembling. 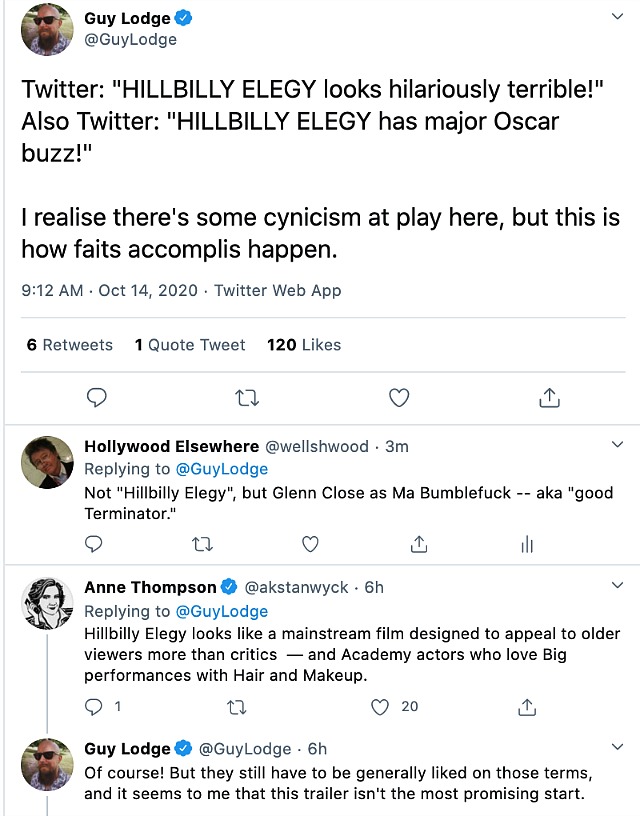 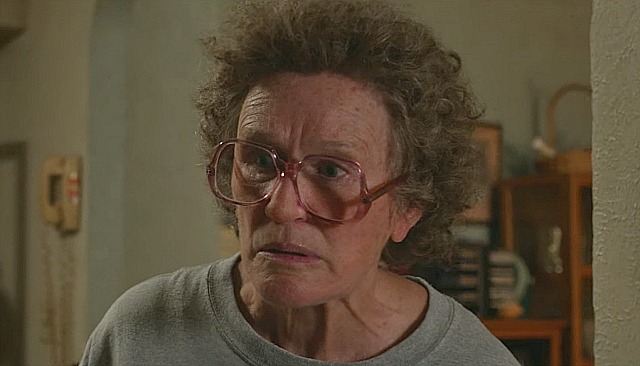 This decision is a stain on the reputation of NBC News, which has decided to reward Trump for walking away from a debate. It's not the first time NBC has let itself serve as Trump's useful idiot, but it may be the most egregious. https://t.co/kOVdmIi91W 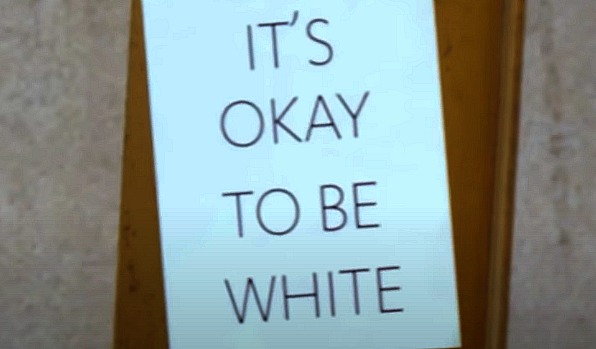 …if and when Biden wins and Trump retires to Mar a Lago?

Friendo: “It’s probably too late to put [the woke] genie back in the bottle as an entire generation has been brainwashed by the gender-studies-and-identity-politics fascist-college-professor mafia, and the mainstream media has been infiltrated by this insanity as if eaten by termites. I grieve for all of this (and have for several years now), and I really do get it.

“[But eventually] backlashes are going to set in (did you see Bill Burr‘s opening monologue on SNL? — I was shocked that they allowed it). And once the fervor goes out of the whole idea of a ‘resistance’ (a term so despicable and narcissistic that it makes me almost physically ill), I think some of the wind may go out of the woke sails.

“Things go out of fashion, and then come back in. And vice versa. And wokeness, as destructive as it is, is nothing if not fashion. It has no more moral reality than buying a handbag to prove you’re cool.

“Basically, wokeness is white supremacy for hipsters. I assume that at some point people with IQs over 100 are going to start figuring that out.

HE to Friendo: I have more motivation to despise the wokester totalitarian thought-police left than most. I’ve flirted with primitive fantasies I’d rather not speak of. Sometimes I feel as if I’m Travis Bickle talking to Peter Boyle in that scene outside the Belmore Cafeteria….”I’ve got some really bad thoughts.” Nobody despises these monsters like I do.

It has always bothered me that some seem to see Biden-vs.-Trump in purely strategic terms. It’s a tennis match, a gladiatorial duel. Trump, they say, is merely a product, an agenda, point of view. These folks never seem to mention the moral necessity of banishing the demented, alcoholic uncle who’s blasting shotun holes through the walls and generally trashing the community. “Trump might win if he does this or that,” they say. “If people despise the left enough they might break for him,” etc. This is a moral issue, not a strategic one. It’s life vs. death. Trump is not a “bad guy.” He’s literally Satanic.

Friendo: “There’s no such thing as a sure thing. But there’s something that even the polls and studies don’t measure — that the nation seems exhausted by Trump. It’s like living with a drug abuser. After a while, you just want out.”

Guess who saves J.D. and encourages him to find his own life outside this ghastly downswirling culture, and to seek higher ground?

Close is obviously a Best Supporting Actress contender as she checks at least three boxes — unflattering physical transformation, yokel accent, long overdue. She’s clearly doing something that holds your attention. And she’s playing the savior. “Supporting” because I’ve been told over and over that “Mawmaw” is not a lead.