Support on Patreon Follow @wellshwood
34 Comments
If I Could Magically Interview Hitchcock….

I wouldn’t ask the following because it would constitute too much of an insult, but I would’ve loved to have discussed this with Francois Truffaut:

“Due respect, Mr. Hitchcock, but you must have known or at least suspected all along that your direction of children in your films was — no offense — ghastly. Those little school kids in The Birds were an all-time embarrassment. That little girl delivering a Dutch translation of Joel McCrea’s message to the police in Foreign Correspondent was grotesque. One senses that perhaps you were irked by children and had little patience with them. And what about that kid in North by Northwest who plugs his ears before Eva Marie Saint “shoots” Cary Grant? Your continuity person must have spotted that but it went into the film regardless. Why did you let that pass? Seriously, bruh…you might have been the worst director of adolescents in motion picture history….no offense.”

The esteemed director of Mank is saying that young Orson Welles never got past the burden of being over-rated — that he got lucky with the help of Gregg Toland and Herman J, Mankiewicz in the making of Citizen Kane, but in the long aftermath he more or less killed his career with hubris.

Welles “was above all a showman and a juggler with this immense talent. [His] tragedy lies in the mix between monumental talent and filthy immaturity.

“Sure, there is genius in Citizen Kane…who could argue? But when Welles says, ‘It only takes an afternoon to learn everything there is to know about cinematography’…pffft. Let’s say that this is the remark of someone who has been lucky to have Gregg Toland around him to prepare the next shot…Gregg Toland, damn it…an insane genius!”

“I say [this] without wanting to be disrespectful to Welles. I know what I owe him, like I know what I owe Alfred Hitchcock, Ridley Scott, Steven Spielberg, George Lucas or Hal Ashby. But at 25, you don’t know what you don’t know. Period. Neither Welles nor anyone. It doesn’t take anything away from him, and especially not his place in the pantheon of those who have influenced entire generations of filmmakers.

“But to claim that Orson Welles came out of nowhere to make Citizen Kane and that the rest of his filmography was ruined by the interventions of ill-intentioned people…it’s not serious, and it is underestimating the disastrous impact of his own delusional hubris.”

It’s almost become par for the course to cancel or persecute people for things they did as far back as the ’80s (i.e., Brett Kavanaugh) or ’90s. So why haven’t wokesters tried to cancel Damon Wayans and David Alan Grier for their deeply offensive “Men on Books” skits from In Living Color? Talk about hurtful, derogatory, old-hat cliches. They’ve banned Song of the South but these skits remain on YouTube?

34 Comments
“Don’t Touch Me Unless You Love Me”

Alan Pakula‘s The Parallax View (’74) is easily the spookiest and most unsettling film of his “paranoid trilogy”, the other two being Klute (’71) and All The President’s Men (’76).

Based on Loren Singer‘s 1970 novel of the same name, it reflects the vaguely haunted vibe of the early ’70s and the residue of all the assassination conspiracy theories (JFK, MLK, RFK) that had been kicking around. It’s about those three killings, mainly, and all that spilt blood.

The script by David Giler, Lorenzo Semple Jr. and an uncredited Robert Towne is a reasonably crafty noir with perfunctory thriller elements here and there. All of which Pakula handles nicely. My favorite is a bomb-on-a-plane sequence. And the film certainly has an extra-dark ’70s ending…a bitter pill of irony thing.

The story is about Joe Frady (Warren Beatty), a second-tier investigative reporter who stumbles upon evidence of a secretive, CIA-like outfit, the Parallax Corporation, that kills political figures by contract — a kind of corporate-style Murder Incorporated. It’s a ludicrous idea when you think about it for 15 or 20 seconds, but Pakula, Beatty, cinematographer Gordon Willis and especially composer Michael Small make it into an eerie mood piece. 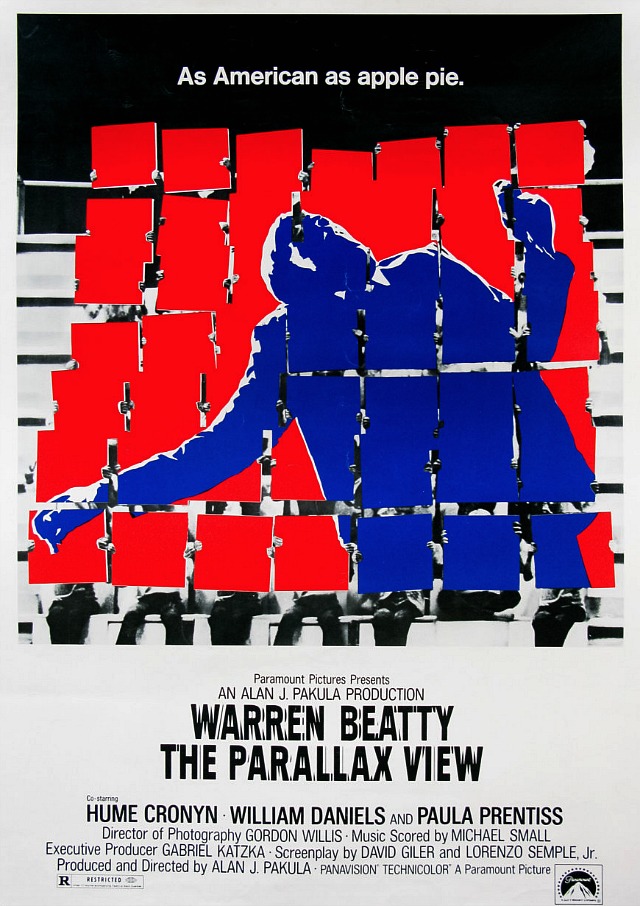 Not for one solitary second do you believe that Beatty is Frady. He’s obviously just winging it…playing himself, saying the lines. Each and every second all you get from his performance is “okay, I’m supposed to be this nervy, raggedy-ass journalist with a drinking history…a guy with long, perfectly cut hair who’s much too good-looking to be a journalist and who wears tight jeans and a light brown jean jacket, just like me…the jacket’s the same one I wore on The Dick Cavett Show in ’72, by the way…but I’m just playing myself playing this guy…whatever, a meta thing.”

Why is Beatty’s character called Frady, by the way? The association is with the childhood term “fraidy cat” but if anything Frady isn’t afraid enough.

The weird part of The Parallax View is when Frady visits the small town of Salmontail, Oregon, at which point the film starts to behave like a New World exploitation film — a raucous bar fight, a crazy car chase, a fight to the death in a raging river. Not to mention a waitress who asks our protagonist “how is a martini like a woman’s breast? Because one isn’t enough and three is too many.” Beatty doesn’t even crack a grin.

A Criterion Bluray version — “a new, restored 4K digital transfer” — is coming out on 2.9.21, or roughly three weeks after Joe Biden‘s inauguration. (Which Donald Trump isn’t likely to attend.)

I own a beautiful Vudu UHD HDX version, and there’s no way the Criterion is going to look any better. It’s a handsomely shot film, for sure, but the Criterion isn’t going to deliver any kind of big bump.

I have a problem with Adam Maida‘s Criterion jacket art, by the way. Who the hell is the silhouette guy with a star-spangled bullet drilling into his head? It’s obviously not Beatty but it should be. The story is about the adventures of Joe Frady so why show us a silhouette of a guy who has nothing to do with anything?

You know what they should have done? Used the original poster art, an impressionist image of William Joyce‘s Senator Charles Carroll getting shot at the top of the Seattle Space Needle along with a perfect slogan — “as American as apple pie.”

Small’s music is definitely the creepiest thing about this weird, in-and-out film. 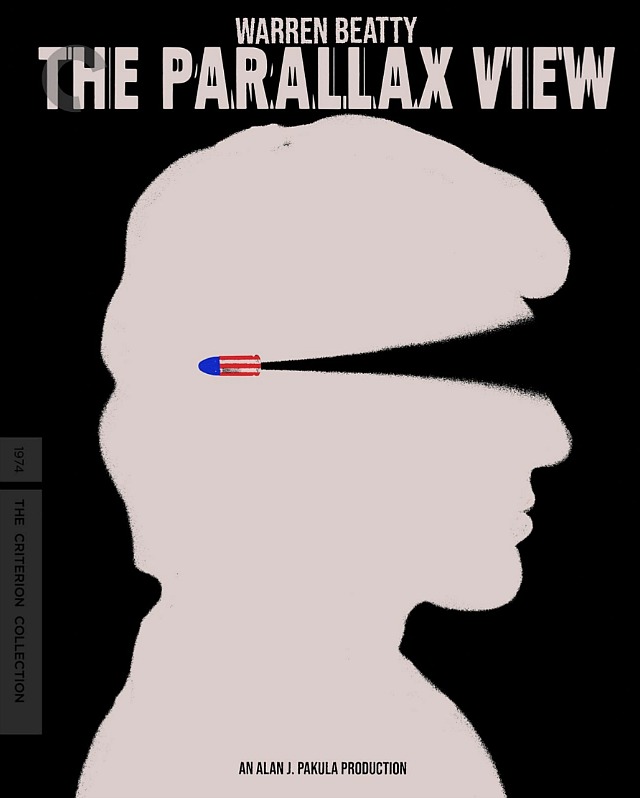