Good or bad, handsome or ugly, rich or poor….they are all equal now. 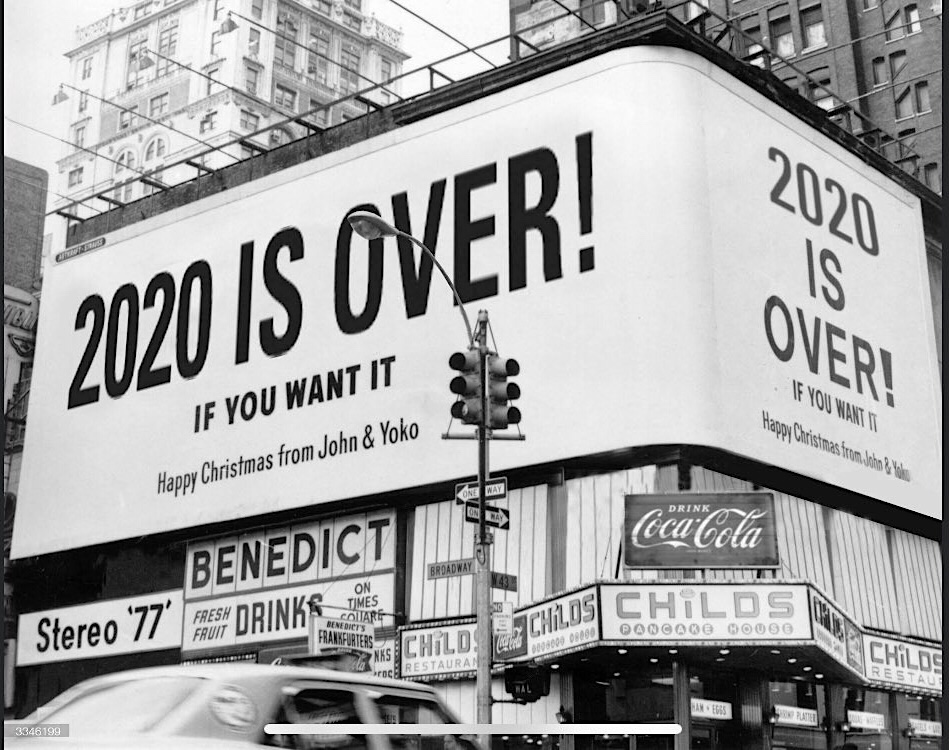 From Owen Gleiberman‘s recently posted Variety review of Mario Puzo’s The Godfather, Coda: The Death of Michael Corleone: “Here’s the news and the ever-so-slight scandal: It’s the same damn movie. I’m not exaggerating; it really is.

“The one impactful change is the new opening scene. The film now begins with the let’s-make-a-deal negotiation between Michael and Archbishop Gilday (Donal Donnelly), the weasel who heads the Vatican Bank, in which Michael agrees to pay the Vatican $600 million in exchange for the right to become the controlling shareholder of Immobiliare, an international real-estate consortium. Taking that scene, which previously came about half an hour in, and moving it to the front gives the film a kick-start, and it clarifies the underworld-meets-Catholic-Church corporate-business plot that didn’t actually need clarifying.

“Once that happens, the movie proceeds along in exactly the same way it did before, except that Coppola has made about five minutes’ worth of trims. [Plus there’s] a new ending, in which Michael is seated in that same chair in the sun [by his Italian villa], only now he doesn’t die.”

Two days ago legendary Los Angeles movie-beat TV guy David Sheehan passed from cancer at age 82. Regrets and condolences for this one-time critic, interviewer, producer, man about town. Not the hippest cineaste I’ve ever spoken to but sharp and personable enough. Sheehan was hot stuff from the early ’70s to early aughts on KCBS, KNBC and then back to CBS.

In the spring of ’85 I was working for partnered publicists Bobby Zarem and Dick Delson, and their star client at the time was Sylvester Stallone. Delson and I were with Stallone out at KNBC studios in Burbank for a Tonight Show with Johnny Carson appearance. Delson and I were waiting in a large adjacent hallway while Stallone was attending to business.

All of a sudden Sheehan showed up with a camera and sound guy, wanting to speak with Stallone. Delson hadn’t approved this — it was a totally unscheduled, total guerilla ambush on Sheehan’s part.

Did Delson go up to Sheehan and say, “Look, if you want to do an interview let me talk to Sly, and if he’s agreeable we’ll figure something out.” No, and the reason was unclear. Either Delson didn’t personally like Sheehan or was extremely angry about the ambush and determined to rebuff all advances, or had he figured Stallone might not be amenable and didn’t want to risk angering him?

So Delson stood in the hallway and glared at Sheehan and sulked, and Sheehan and his camera guy just waited patiently for Stallone to appear.

Stallone emerged 10 or 15 minutes later, Sheehan pounced, they did a five-minute quickie…over and out.

Sheehan was obviously playing a kind of hardball game with Delson. He was basically saying “look, Stallone will be here in a few minutes and I work in this building so why can’t I just talk to him right now? Why do I have to play by your chickenshit rules when I don’t have to?”

He was clearly showing more balls in this situation than Delson was. Delson was giving him a deathray look, but Sheehan just chilled and kept his cool and did his job.

“Pump and Dump, I believe, is the term of art. AT&T would not be the first corporation to come to Hollywood and once the excitement of Oscar floor seats fades and the checks start coming due, their first thought is ‘Somebody get me the hell out of here!‘

“With all that as the backdrop, let’s first stipulate that I’ve frequently criticized the leaders of our little industry as too timid, conservative, reactive, and lacking guts and vision. Whatever else you can say about [Warner Bros.’ decision to offer all 2021 films simultaneously in theatres and HBO Max], timid and piecemeal it ain’t.

“A giant entertainment conglomerate is risking everything it’s got, betting the entire store on a new division — a floundering new division, no less. So whatever else we say about it, let’s bow to a rare show of moxie.

“This may turn out to be brilliant, or the greatest disaster in entertainment history, but at least it’s not ‘Are there any other Spider-Man supporting characters we can make a movie about?’

“Whatever else happens, you can’t say they didn’t try.”

For the good of enlightened 21st Century culture and the emotional safety of a certain subsection of Millennials and Zoomers, it is proposed that two lines of dialogue in Woody Allen‘s Everything You’ve Always Wanted To Know About Sex (specifically the “What Happens During Ejaculation?” sequence) be removed.

Both can be found in the top video. At 2:48 a sperm cell played by Allen asks “what if this is a homosexual experience?” This has to go along with the look on Allen’s face. At 3:59 an African-American sperm cell asks, “What am I doing here?” — obviously toxic racism and completely unacceptable.

“[A week after] I was asked to leave New York Magazine, they ran an 8,000-word piece I’d written, about plagues through history, so it wasn’t about the quality of my work. It was about their desire — not the editors, again, but other people — their desire to simply say, ‘I don’t want to be associated with this person, that he’s morally awful.’

“These are attempts to enforce morality upon people in every part of their life…the language they use, the mannerisms they have, the places they work. This is the puritanical strain within American history, which is not equivalent in many other countries…this moralizing attempt to persuade and coerce to save your fellow citizens.

“If America were as bad as bad as the establishment left now believes, why would all these people want to come here? 86% of our immigration is non-white. What [form of] white supremacy invites 86% of its immigrants to be non-white? It’s completely bonkers.” — Andrew Sullivan speaking this morning to Megyn Kelly on her podcast.

The good stuff starts around 8:15.

#DisruptTexts is basically a movement by African American educators to challenge white narratives in standard-cirriculum literature for pre-college students. The idea is to introduce anti-racist perceptions and understandings.

If you wanted to be judgmental you could call #DisruptTexts a form of progressive revisionism or even a racially enlightened form of book burning. The other side of the coin is that we need to step outside of our white attitudes and take steps to redress our culture’s racist history. Or something like that.

I was struck this morning by the dismissive #DisruptTexts assessment of the beloved Atticus Finch, the small town widowed attorney, father of two children and moral hero of Harper Lee‘s “To Kill A Mockingbird,” which has been taught in schools for decades.

Last June a reader suggested to #DisruptTexts co-founder Lorena German that “we must show compassion to teachers and writers of the past [and not] judge them so harshly.”

Excerpt from German’s reply: “How about we spend some time finally showing compassion for the victims of racism and systemic oppression instead of the folks who perpetuated it? I don’t need to know someone’s heart, to know they were doing something wrong and inhumane. There were plenty of people at the time of Harper Lee writing books, essays, articles, and making speeches who were antiracist and already operating in a humane manner toward People of Color. Teachers and writers of that time could have shown empathy, the one you’re asking us to show, then toward those writers and thinkers. So, they’re not simply ‘teachers and writers of the past’ — they were participating in racism.”

Thoughts? And what would Gregory Peck say if he was around? 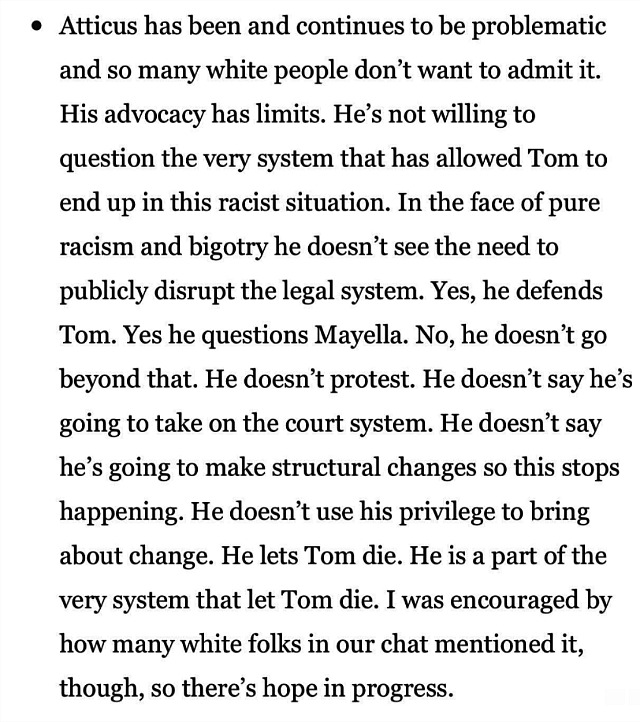