As we speak, Wonder Woman 1984 (Warner Bros., 12.25) has an encouraging Rotten Tomatoes rating of 88%. Suggesting that most critics are in no mood to gripe and have fallen into line. But there’s one noteworthy pan from Vulture‘s Angelica Jade Bastien, who carries a certain weight and authority.

Excerpt #1: “This sequel had almost everything going for it. Its empathetic predecessor is likely the most beloved and critically successful of the slate of beleaguered DC Comics films. Its time-skipping story offered a way to expand the superhero genre’s usual plot beats — which was desperately needed — and arrived buoyed by an excellent cast. Perhaps its lopsided universe was not perfect; there were lackluster villains and a noticeable absence of racial diversity and sensuality, and the sequel had to contend with a significant jump from WWI-era Europe into early 1980s Washington, D.C. But these issues were surmountable.

“Sadly, all that glittered in the franchise’s first outing is gone in Wonder Woman 1984. The disappointing sequel highlights not only the dire state of the live-action superhero genre in film, but the dire state of Hollywood filmmaking as a whole.”

Excerpt #2: “Wonder Woman 1984 is a turning point in the history of Hollywood’s business, what with Warner Bros. banking big on the hope that the film’s Christmas Day release will be the push its (admittedly good) streaming service, HBO Max, needs (in the U.S., at least).

“But the film is indicative of the larger pitfalls of an aging superhero genre. Watching Wonder Woman 1984, I couldn’t help but think of the utter hollowness of representation and how corporations have adopted the language and posture of political movements in order to sell back to us a vacant rendition of the change we actually want. In many ways, studios have trained audiences to view the bombast of their blockbusters as possessing inherent worth — especially when they place reflections of us on the big screen. This isn’t good filmmaking. And as more and more exciting directors get caught up in the gears of this mammoth genre, I can’t help but reflect on how their talents would be better utilized elsewhere.

“If only Hollywood gave them real control over stories, rather than treating their work as mere conduits for content the studio can replicate and sell.”

From World of Reel‘s Jordan Ruimy, an early summary of the most anticipated films of 2021. Many of these were bumped from 2020, of course. All the copy is on Jordan’s side. What’s missing?

“Where the water line is gonna land on freedom of speech, what we allow and what we don’t, where this cancel culture goes, is a very interesting place that we’re engaged in as a society and are trying to figure out. We haven’t found the right spot.

“You’ve got to have confrontation to have unity. That’s when a democracy works really well. I would argue we don’t have true confrontation right now, confrontation that gives some validation and legitimizes the opposing point of view.

“[Instead of giving] a legitimacy or validation to an opposing point of view, we make it persona non grata, and that’s unconstitutional.”

9 Comments
For Now, The Dude Is Yul Brynner-ed

Best wishes, hail fellow and “hang in there” cheers to The Beloved Dude, whose lymphoma battle has resulted in a temporary shearing of his silver mane. 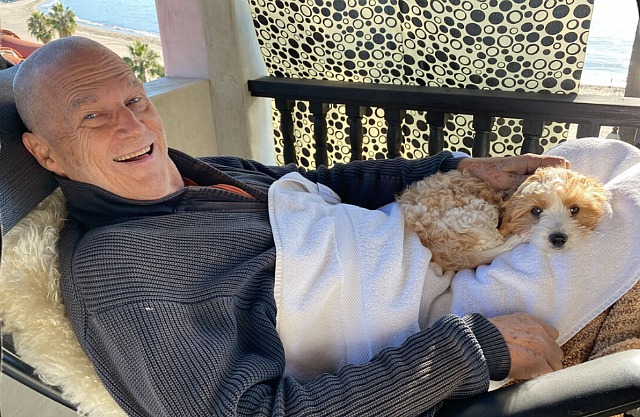 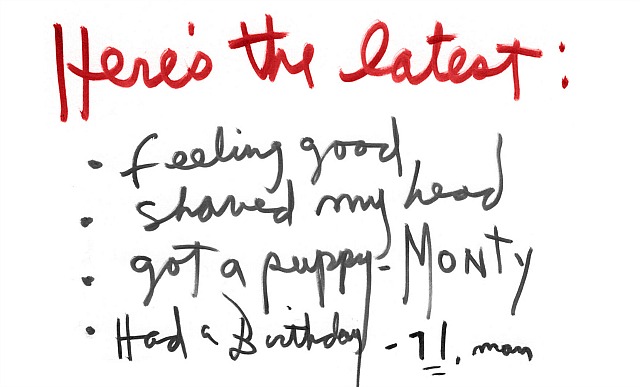 Chris Nolan‘s Tenet pops today on 4K Bluray and Amazon streaming. Both will presumably offer subtitles. So starting today, anyone on the planet can watch this thing with at least a fighting chance of understanding the particulars, not to mention the mostly obscured dialogue.

I didn’t even try to make heads or tails of the story when I saw Tenet in Flagstaff three and a half months ago (a late afternoon screening on Friday, 9.4).

First paragraph of Tenet‘s Wiki synopsis: A CIA agent, the ‘Protagonist’, participates in an undercover operation at a Kyiv opera house. His life is saved by a masked soldier with a distinctive red trinket, who ‘un-fires’ a bullet through a hostile gunman. After seizing an artifact, the Protagonist is captured by mercenaries. He endures torture before consuming cyanide. He awakens to learn the cyanide was a test of his loyalty; his team has been killed and the artifact lost.”

Last night Variety‘s Clayton Davis reported that Emerald Fennell and Carey Mulligan‘s Promising Young Woman (Focus Features, 12.25) “has been submitted to the Golden Globes in the comedy or musical categories.”

Every year some award-seeking distributor tries to expand the Golden Globe definition of what a comedy or musical might be. Trust me, swear to God, take it to the bank — there’s nothing the least bit amusing about Promising Young Woman, and I mean not “ironically”, not darkly comedic or comedy of horrors…none of that.

It delivers a certain dry, flinty attitude that some might interpret as arch, but arch has never been synonymous with funny. (Not in my book, at least.) The film is admirably dry and deadpan, true, but deep down it’s cold and frosty. It’s a feminist Death Wish but with a certain flair or flourish — Fennell and Mulligan are basically saying “death to all insensitive scumbags and date rapists out there, including a certain fellow who initially seems like he might be a decent human being.”

“It’s been described as a kind of #MeToo Death Wish thing, but it’s a much finer creation than Michael Winner’s 1974 film. And yet God, the ice water in its veins! So angry at chauvinist prick fuckheads that it can’t…well, it can see straight but it can’t cut anyone a break. The evil parties must pay and die, and the feeling of vengeance and wrath is such that it just HAS to splash over and soak Carey’s character…I’ll leave it at that.

“And yet one mark of exceptional artistic achievement is not being afraid to go all the way. PYW definitely goes for broke and then some. It doesn’t just despise the young male tribe of insensitive assholes out there — it wants them exterminated like insects.”

…about agreeing to star in a new Dungeons and Dragons film? Apart from the paycheck factor, I mean.

Pine is a formidable actor. He knows his craft. Twice I’ve watched him deliver like a pro at the Geffen Playhouse — in a 2007 production of Neil Labute‘s Fat Pig and in a 2009 production of Farragut North. Four years ago he was excellent in Hell or High Water. In August ’19 it was announced he’s “attached” to play Walter Cronkite in Newsflash.

I wouldn’t exactly call Pine’s willingness to do Dungeons and Dragons tragic. It’s basically just a financial portfolio move. He probably sees it as analogous to Harrison Ford starring in Cowboys & Aliens. But it does seem silly and wasteful. 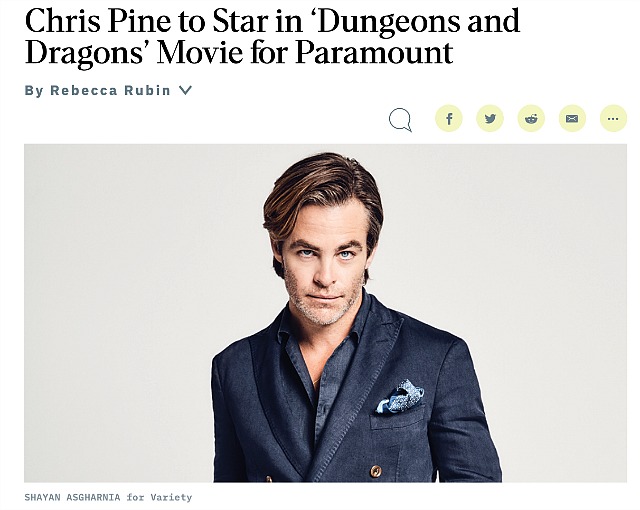 When this or that celebrity expresses strong disapproval of some person or policy or behavior, the tabloids constantly use the transitive verb “slam”. To slam someone is to assault them with the verbal equivalent of a right cross…right? Except when criticisms are voiced or more often tweeted, they often feel more like taunts or glares or jabs. HE “slam” substitutes: backhand, side-eye, upbraid, zing, reproach, poke, scold, diss, badmouth, stiff-arm, ding.