Basic logline for Young Hearts: “Tilly (Quinn Liebling) and Harper (Anjini Taneja Azhar) ultimately become each other’s first high school boyfriend and girlfriend. But when their budding relationship suddenly becomes the talk of their school, they are faced with enormous pressure from their so-called friends. A breakup is, perhaps, inevitable.”

Can I ask something? I’ve watched this trailer twice and what is it, exactly, that Tilly and Harper are doing that strikes their friends as uncool or warrants being “the talk of their school”? They’re nice kids and attracted to each other — what’s the problem?

Honest question: At what point does the physical size of a young woman in a presumably adult relationship become…well, an issue of vague discomfort? Azhar is only 4’8″, or roughly the size of a seven or eight year old girl in elementary school. Elliot Page towers over her at 5’1″.

I’m not espousing sizeism, but if you were Chris Nolan and a casting agent had urged you to consider hiring either Azhar or Elizabeth Debicki for the role of Kenneth Branagh‘s wife in Tenet, who would you be more inclined to hire? And why?

I’ve made it clear that Ben Affleck‘s basketball coach alcoholic in The Way Back struck me some time ago as totally naked — perhaps (probably?) the closest-to-the-bone performance he’s ever given.

This is emphasized by the fact that The Way Back isn’t a “let’s man up and put our problems behind us so we can win the playoffs” drama — it’s an emotional (and psychological) saga of a guy who’s furious about something ghastly that happened to him and his ex-wife, and about how he copes with this terrible scar on his heart and soul. I love how The Way Back isn’t afraid of Jack’s rage and subliminal longing for self-destruction — it digs right down into that pit. It isn’t the least bit tidy or sanded down or escapist.

This plus the fact Affleck seems to have lost about 30 or 40 pounds since Naomi Fry‘s “Sadness of Ben Affleck” piece ran in The New Yorker (3.24.18)…a change that I’m processing as a visual metaphor for the shedding of issues that were dragging him down..this also is a good thing.

I’m sorry for not yet having seen Julia Hart‘s I’m Your Woman (Amazon Prime, 12.4.20). The truth is that I decided to wait after seeing the trailer, which looked like a fairly basic ’70s-era action flick about a victimized woman (Rachel Brosnahan) whose life is in constant jeopardy because she was dumb enough to marry a guy (Bill Heck) who reeked of criminality from the get-go.

Generally approved by critics, Woman was produced by Brosnahan (The Marvelous Mrs. Maisel). The thinking is that she might get some Best Actress awards action out of it. I should probably admit that I was inspired to post this because I recently received a very cool promotional gift associated with I’m Your Woman — a nice red battery-powered bedroom alarm clock. 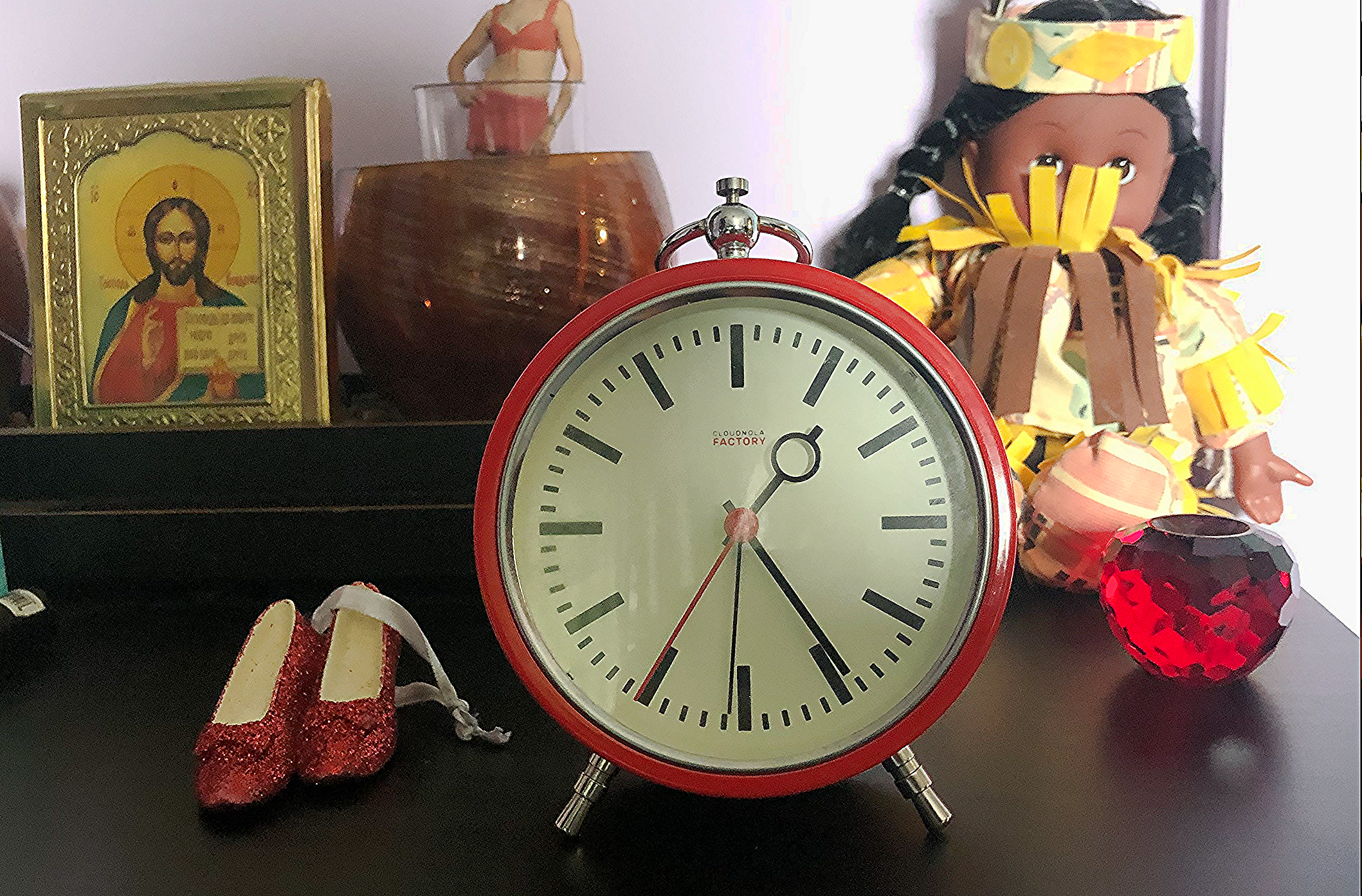 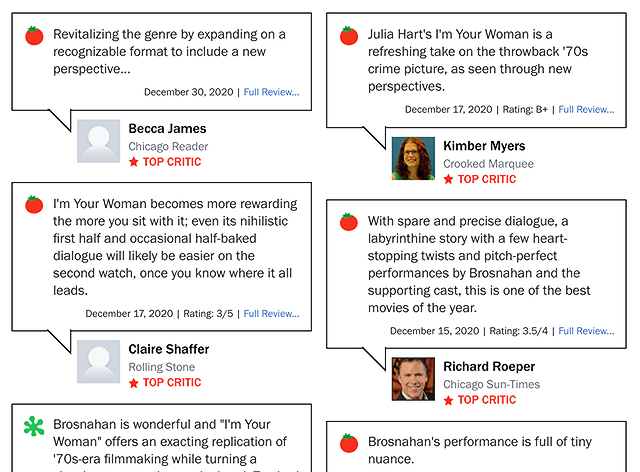 104 Comments
Will Wokester Terrorists Calm Down or Ramp Up?

From Substack’s “Common Sense with Bari Weiss“. a piece that asks whether the Khmer Rouge will relax their vendetta against moderate centrists and independent iconocloasts under Biden, or turn it on all the more. Plus a discussion with Megyn Kelly, who notes that Weiss, when working at the N.Y. Times, was faced with a situation in which she had to offer “full submission” to woke orthodoxy or else.

Weiss: I voted for Joe Biden. I think that he is past his prime. I also think he is an eminently decent and kind man. That fact that his decency seems positively refreshing is a tragic sign of where we are. But it does. And I welcome it. But…

Will the Biden administration make the case that America is good?

That’s not sarcastic or rhetorical. And it’s not a question about what’s in Joseph R. Biden’s heart.

I mean: Will his administration embrace the new re-understanding of America that shot through the streets [last] summer and issues forth daily from the mouths of our elites? That view goes like this: America was born for the purpose of upholding white supremacy and it remains irredeemably racist. Our founders were not primarily political geniuses but slaveholders who wanted to find a way to hoard their property. And while the rioters may have gotten a little out of hand, they weren’t wrong to target statues of men like Lincoln.

To take a stand against the teardown; to insist that, America, for all its flaws, remains a source of hope on Earth; to suggest that our founding date is 1776 and not 1619; was to out yourself as some bigoted troglodyte.

Will the forces that insist that America is unexceptional control the bounds of discourse and policy in the Biden administration? Or will the White House stand up for the basic tenets of liberalism, like the free exchange of ideas, even — especially — the ones they don’t favor?

Will neo-racism be normalized?

A few months ago I spoke to a Trump administration official who confirmed that the president wouldn’t know what Critical Race Theory was if it smacked him in the face. Nevertheless, in September of 2020, Trump passed an executive order banning training for federal agencies and federal contractors that relies on this ideology.

Time Magazine was far from alone in spinning Critical Race Theory as “an indispensable and widely accepted tool for properly understanding the state of the nation.”

Critical Race Theory is a threat to the most basic foundations of American life, including, but not limited to, equality under the law. It asks us to define ourselves by our immutable characteristics. It pits us against one another in an endless power struggle. It rejects Enlightenment tools of reason and scientific discovery as tainted. And it undermines our common humanity.

Everyone will begin to emerge from their hovels and caves sometime in late ‘21 or early ‘22. The idea of mask-free social activities seems so exotic now, but it’ll eventually happen. And when it does and we’re all able to schmooze around and get a good look at our friends, acquaintances and business colleagues after almost two years in stir, almost everyone over the age of 30 is going to look at least five years older than how we remember them. Others may look older than that. (Even with my Prague procedures…even I will look older.) The applicable term will be “battle-worn”. Like how Jimmy Stewart and Clark Gable looked when they returned to Hollywood after WWII service. And everyone will greet each other with “wow, you look good…the pandemic agreed with you!” What else are we gonna say?

In the comment thread for “Mid Clinton-Era Romcom,” “filmklassik” suggested that George Clooney‘s finest films were relatively few and far between. Let me gently explain something. The legacies of the greatest stars are always about a relative handful of films. That’s just the way it shakes out. Clooney, whose peak period lasted longer than most (almost 20 years), more than measures up alongside anyone you might want to name (James Stewart, Cary Grant, Humphrey Bogart, Burt Lancaster, James Cagney, John Wayne, Paul Newman, Robert Redford).

MICHAEL CLAYTON is Clooney’s mythical summit. Followed by THE DESCENDANTS, UP IN THE AIR, OUT OF SIGHT, INTOLERABLE CRUELTY and BURN AFTER READING. Six bona fide classics. Not to mention GOOD NIGHT & GOOD LUCK (Clooney’s best-directed film), SYRIANA and HAIL, CAESAR. Plus THREE KINGS. I would go further and include THE PERFECT STORM. I would even include the first two OCEAN’S films. Six goldies and five silvers and two bronze.

In ‘02 or thereabouts I gave Tony Curtis (whose peak period started with Sweet Smell of Success and ended with The Boston Strangler) a list of all his films & asked him to check off those he truly admired and respected. He checked off about 10%, if that.

Same with Kirk Douglas when I offered the same during a set visit with him in ‘82 — just a handful (basically confined to his 15-year peak period between ‘49 and ‘64) but he felt VERY good about those few.

** Some enjoy 15- or even 20-year rides. Grant peaked from the late ‘30s to late ‘50s. Cagney between Public Enemy and White Heat, Stewart between Destry Rides Again and Anatomy of a Murder. Clark Gable’s hottest years were between It Happened One Night (‘34) and The Hucksters (‘47), Bogart’s between High Sierra / The Maltese Falcon (‘41) and The Harder They Fall (‘56) — a 15-year run. Wayne was fairly aflame between Stagecoach and North to Alaska. Redford peaked between Butch Cassidy (‘69) and Brubaker and Ordinary People (‘80). I’m talking about the years when they had serious heat.

I wish, if only, don’t kid yourself, etc. 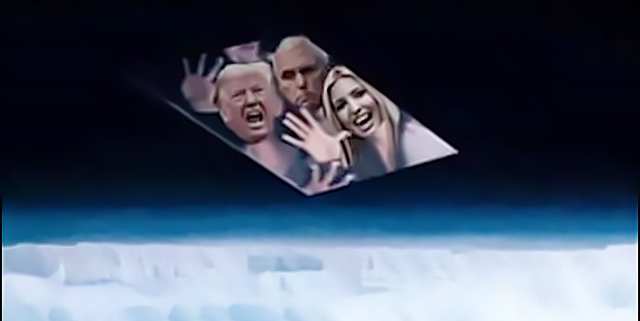