A Bret Stephens column about the week-old firing of N.Y. Times reporter Donald McNeil was recently spiked by Times publisher AG Sulzberger, mainly because Stephens quoted a previously published remark by ‘80s Republican attack-dog Lee Atwater that mentioned the “n” word. Khmer Rouge-minded staffers would’ve presumably had a fit if Stephens’ piece, which emphasizes intent as a key journalistic focus, had been published.

To me, John Woo‘s Face/Off (’97) was show-offy, over-the-top, high-style bullshit. Plans for a remake were announced a year and a half ago. Now comes news that Adam Wingard, the Godzilla vs. Kong guy, will direct. Terrific.

I hate getting into this, but who would be the coolest costars in this new version? Not that Wingard has a prayer of signing the best.

You can lead horses to water, but you can’t make them drink.

Posted on 2.10.21: “Nearly 1 in 3 people in the United States said that they definitely or probably will not get the COVID-19 vaccine, according to a new survey. The poll, released Wednesday by The Associated Press-NORC Center for Public Affairs Research, found that 15 percent of survey respondents said they will “definitely” not get a coronavirus vaccine. Seventeen percent said that they will ‘probably not’ get the inoculation.”

Friendo: “So 1/3 of the country doesn’t get vaccinated? This is where the vaccine confirmation cards come in.  They won’t be allowed into restaurants, bars, sporting events, movie theaters…hell, extend it to grocery stores. Let’s see how long they can hold out off the vaccine grid.”

“We’re now on track to have enough supply for 300M Americans by the end of July.” pic.twitter.com/lGXtxFtKCP

Lewis Allen and Richard Sale‘s Suddenly (’54), a thriller about an attempted Presidential assassination, runs only 82 minutes with credits — a very tight ship.

Frank Sinatra plays John Baron, possibly the most talkative and emotionally exposed psycho hitman in movie history. His best moment is a confessional speech that begins around 50:25…a bit that ends with Sinatra walking right up close to the camera lens and staring straight into the audience. (Here it is.) His death scene is great also; he’s almost weeping as he whimpers “no…no,” dejected and heartbroken. John Hurt‘s Caligula died the same way in I, Claudius.

Sterling Hayden to yours truly, sometime in late ’78: “We shot it in early ’54. before Sinatra won the Oscar for From Here To Eternity. So during filming he was still ‘down’ in a sense. But he still had the old kezazz.”

John Herbert Gleason was 44 years old, give or take, when he played Minnesota Fats in Robert Rossen‘s The Hustler (’61). He was absolutely mythic in that film…a portly, chain-smoking Greek God in a three-piece suit…chubby fingers, carnation in his lapel, light on his feet. By the same token I felt embarassed for the poor guy when he costarred in the Smokey and the Bandit series as Buford T. Justice…loud and coarse and painful to be around…constantly fuming, a genuinely boring performance. A shame.

Update: It just hit me that by 21st Century standards, the Jackie Gleason of 1961 isn’t even “fat”. Yes, he was hefty, ample, a guy with a gut. But he was no Jabba, and couldn’t hold a candle to the garden-variety sea lions we see shuffling around shopping malls today.

A Seth Abramovitch interview piece with Shelley Duvall appeared this morning on the Hollywood Reporter website.

The 71 year-old actress has seemingly declined in more ways than you can shake a stick at, and she certainly radiates eccentricity. Gray-haired, heavier, bag lady-ish, never leaves her car (which is jammed with stuff), somewhat scatter-brained and at the same time lucid, a chain-smoker of Parliaments (ugghh….my mother used to smoke those).

But she has a life of sorts, living somewhere in the Texas hill country west of Austin, sharing a home with former Madonna band member Dan Gilroy. Surviving, a bit wiggy, hanging in there.

The fact that Duvall barely resembles her 1980s self (much less Wendy Torrance in The Shining) is vaguely distressing, I suppose, but aging can be a cruel process. The basic takeaway is that Duvall is, after a fashion, more or less okay. An odd duck but a woman with her own spiritual presence. Leave well enough alone.

Is there any chance that HBO Max will stream a boxy (1.37:1) HD version of The Shining, as they did last year with Full Metal Jacket? 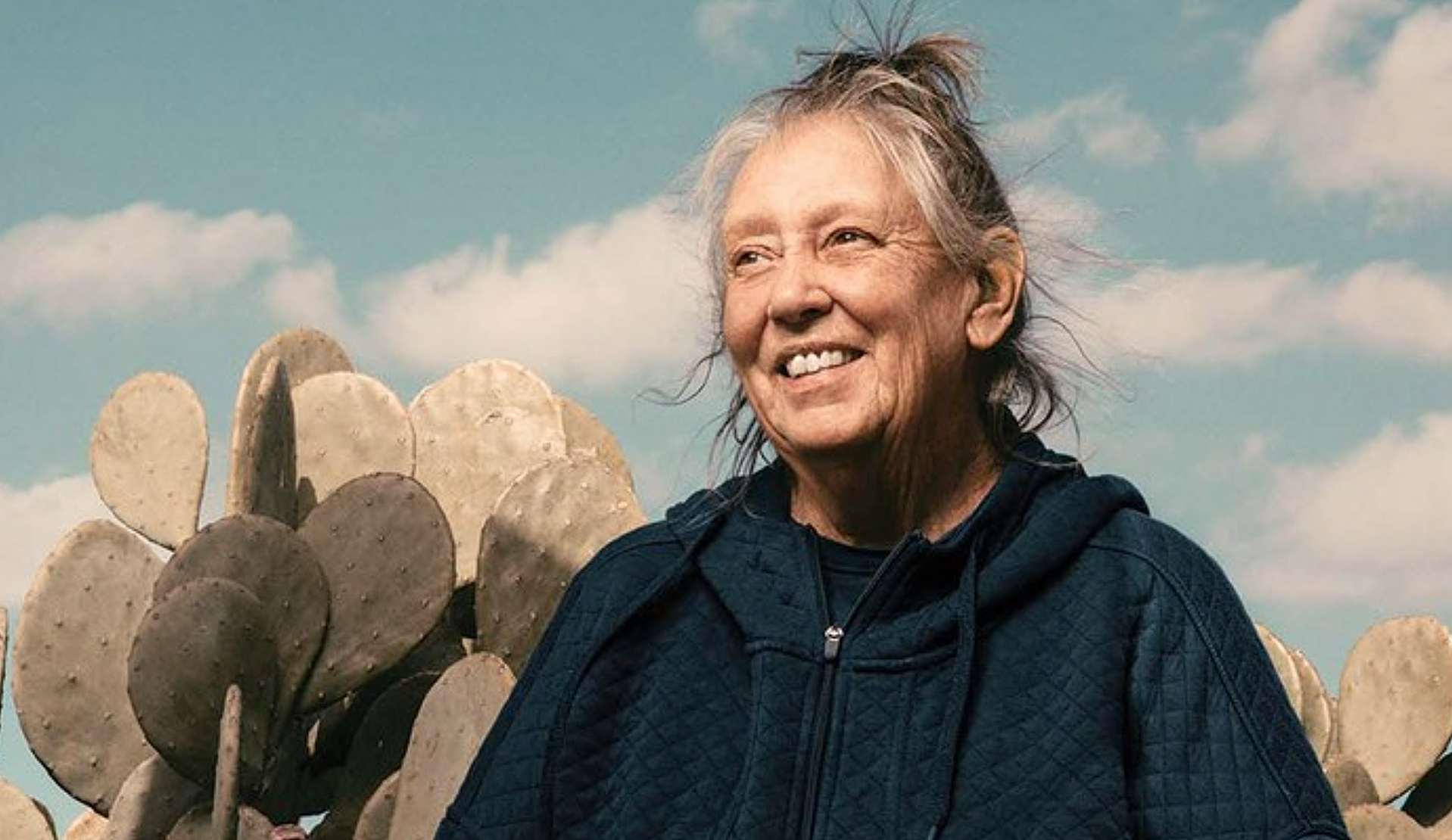 Pedro Almodovar‘s The Human Voice, a 30-minute short that premiered at last September’s Venice Film Festival, will “open” theatrically in Los Angeles, Miami and New York on 3.12.21. And streaming also? (No one has been inside a Los Angeles theatre or screening room in 11 months.) Tilda Swinton front and center, based on a Jean Cocteau play. Shot around nine months ago. Also played at last October’s BFI London Film Festival; also the NYFF. Released theatrically in Spain on 10.21.20. On the 93rd Oscars shortlist (live action short film). 89% Metacritc rating.

Sly’s basic pitch is that resistance bands work better for older guys than weights. The idea came from trainer to the stars Jeff Cavaliere. You can buy bands of varying strength and tautness.

Judging by the visible gear strapped to Wyatt’s Harley, Jack Nicholson‘s George Hanson has brought nothing with him except a football helmet. No bag of clothing and underwear, no toiletries, no sleeping bag…nothing. Which means hygiene standards I’d rather not think about.

Nicholson is 83 now — 84 in April. Somewhere within his just released Mike Nichols biography or in a related interview, Mark Harris notes that Nicholson was one of the very few Nichols collaborators (Carnal Knowledge, Heartburn, Wolf) who wouldn’t grant an interview. We can all guess the reason. I’m very sorry.