Over the last two or three days evenings have been fairly chilly in West Hollywood. Sometimes they can actually be brutal. The damp air sinks into your bones, and suddenly you’re shuddering. I’ve sampled some winter weather in Northern Florida and Georgia, and it can be somewhat similar.

Anyway it was around 9 pm on Wednesday, 3.10 (the night before last) when a guy in a slightly soiled white shirt knocked on the door. Older, swarthy, a bit heavy-set and speaking with a thick-as-peanut-butter Mumbai accent. I couldn’t decipher what he was saying. After the third or fourth attempt I finally understood that he was asking if we could spare a blanket. I couldn’t think of one off the top of my head so I said “I’m sorry, but we don’t.”

Five seconds after he left Tatiana asked “do you have a heart?” and pointed out that we could’ve given him a large ugly beach towel she keeps in her closet — an item I’d blanked on. I grabbed the towel and went outside to find the guy. Gone.

I’ve been feeling funny about this ever since. I can’t remember the last time a homeless guy knocked on my door and stood on my welcome mat with a plea — possibly never. He wasn’t exuding any kind of aggressive undercurrents or hair-trigger vibes, but I suppose I was feeling vaguely threatened on some level. The poor guy was simply concerned about his ability to weather the cold.

My reply, as noted, was partly due to his tortured English. If he’d sounded like Ben Kingsley (or even like Kingsley as Don Logan) and said “pardon me for asking in the dead of night but would you happen to have a spare something or other?”, I probably would’ve asked him to wait while I searched around.

So I failed my Good Samaritan test. I wish I could do it over again. I actually could’ve spared one of the chilly weather jackets I have in my closet but never wear. I’m sorry.

From David Brooks‘ “Joe Biden Is a Transformational President“, posted in the N.Y. Times on 3.11:

“This moment is like 1981, the dawn of the Reagan Revolution, except in reverse. It’s not just that government is heading in a new direction, it’s that the whole paradigm of the role of government in American life is shifting. Biden is not causing these tectonic plates to shift, but he is riding them.

“Reaganism was the right response to the stagflation of the 1970s, but Bidenism is a sensible response to a very different set of economic problems. Income inequality, widespread child poverty and economic precarity are the problems of our time. It’s worth taking a risk to tackle all this. At first Biden seemed like the third chapter of the Clinton/Obama center-left era. But this is something new.” 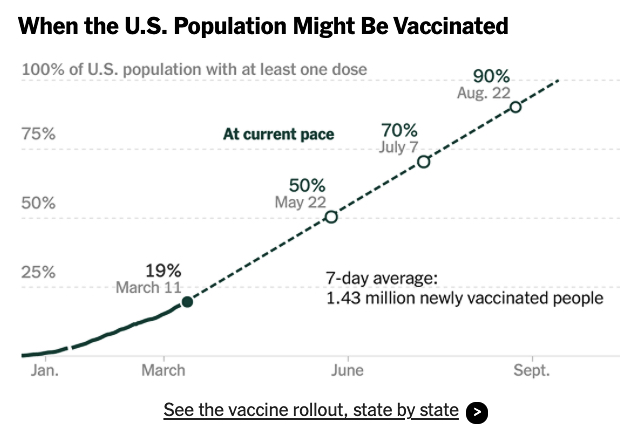 Journo pally #1: “A bad omen for Cannes.” Journo pally #2: “France is a shitshow right now. There are protests every day for President Macron to reopen businesses.”

From 3.7 article by the Guardian‘s Kim Willsher: “Disinformation, distrust and rumors that are downright bonkers have turned what should have been a fairly routine operation into an organizational nightmare. Doctors like mine who have been allocated just 10 doses of AstraZeneca a week – all of which have to be administered in a 48-hour time frame — are spending valuable time and energy trying to drum up just 10 willing patients.

“The reasons for French vaccine scepticism have already been well documented: previous health scandals have sown doubts; the French distrust their politicians and Big Pharma and rail against being told what to do. President Macron’s ill-advised trashing of the AstraZeneca vaccine based on erroneous interpretation of the scientific data didn’t help.” 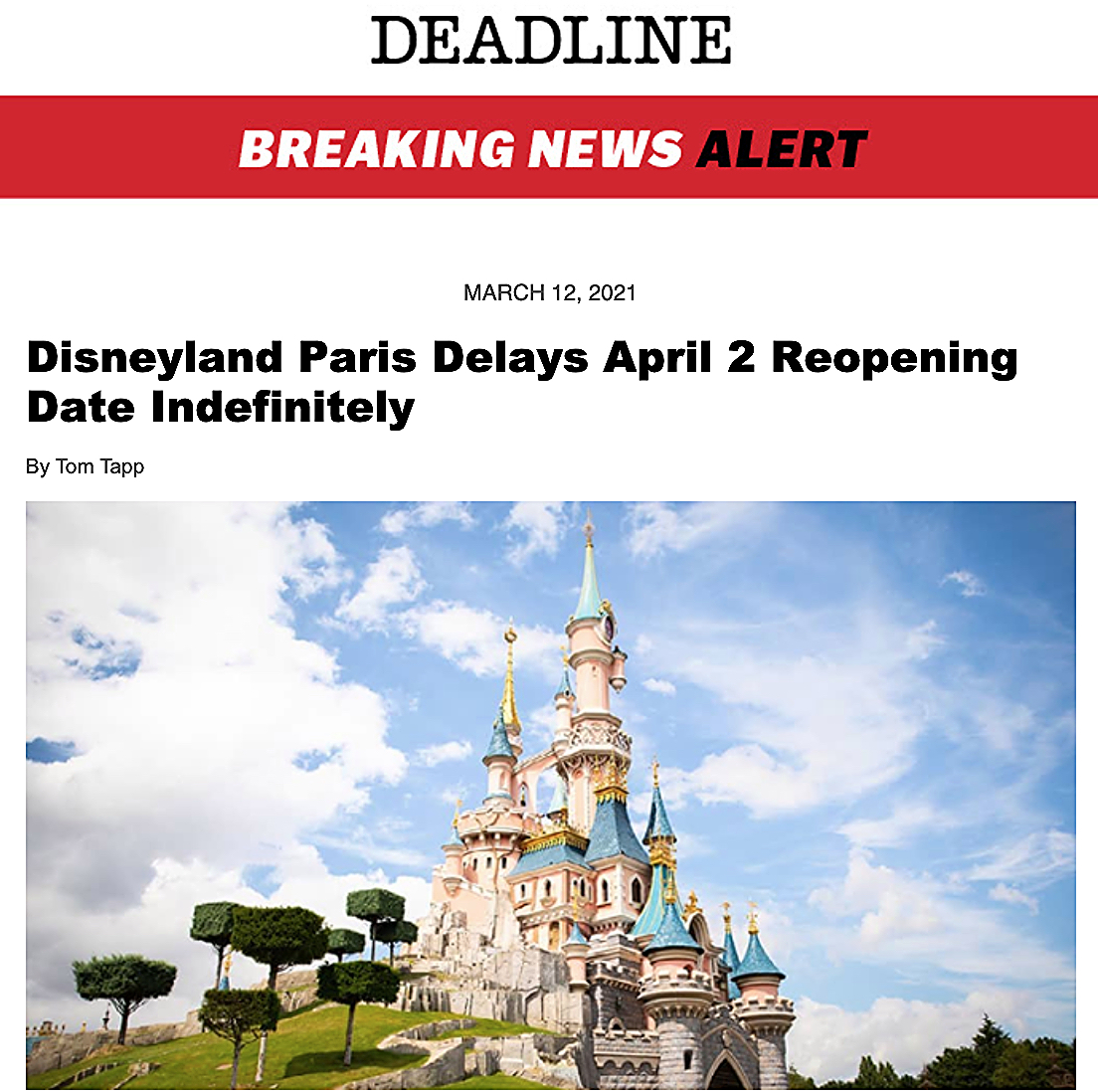 “The European Union’s fight against Covid-19 is stuck in midwinter, even as spring and vaccinations spur hope of improvement in the U.S. and U.K.

“Contagion is rising again in much of the EU, despite months of restrictions on daily life, as more-virulent virus strains outpace vaccinations. A mood of gloom and frustration is settling on the continent, and governments are caught between their promises of progress and the bleak epidemiological reality.”

Once in a great while, a film will deliver a closing-credits theme song that is so off-the-mark that it almost destroys the emotional mood of the film that preceded it.

I’m talking about a film that has carefully and strenuously tried to make the audience feel a particular, hard-won thing, and then a stupid end-credits song comes along and pretty much betrays that effort.

I’m talking about bouncy, upbeat melodies that producers have inserted in order to persuade prospective audiences that the film is some kind of rousing, feel-good experience.

Delbert Mann and Paddy Chayefsky‘s Marty ends happily, of course, but mostly this mid ’50s Brooklyn drama is a serving of downmarket, anti-glam realism. It’s mainly a study of people struggling with ennui, boredom and watching their lives slowly turn to salt. IMHO the “Hey, Marty!” song at the very end is an abomination.

Daryl F. Zanuck‘s The Longest Day, a 178-minute epic about the D-Day invasion of 6.6.44, is a battle-and-adventure flick. The idea was to deliver thrilling feats of daring, valor and aggression on the part of Allied invaders without pelting the audience with too much blood or gore. Saving Private Ryan, it wasn’t. 4,414 Allied soldiers were killed that day; 2,000 died on Omaha Beach alone. Yes, the film ignores the body count while emphasizing the “we can do it!” spirit, but I wouldn’t say it plays like an Allied forces pep rally. Until, that is, the awful Paul Anka song that closes the film (the banal lyrics were sung by the Mitch Miller singers) is heard. I’ve no doubt that veterans of the actual invasion were appalled by it.

I’ve never forgotten how perfectly handled the ending of Titanic was, and how Celine Dion‘s “My Heart Will Go On” (music and lyrics by James Horner and Will Jennings) completely ruined the after-vibe. The closing-credits song should have been an Irish tune of some kind, something that alluded to the thousands of men who built the ship at the Harland and Wolff yard in Belfast. Instead audiences were yanked out of 1912 and thrown into a saccharine pop-music girly realm. Yes, the song was hugely popular and that millions still associate it with Titanic‘s emotional current. But the last 20 minutes of James Cameron‘s film were so much richer and deeper than anything summoned by Dion’s singing…it just makes me sick to think of it.

Other ending-credit songs that damaged or diluted the films they were composed for?

…and I don’t care who knows it. I should care, I realize, as 21st Century music sophistos will probably disapprove. Corporol Robert E. Lee Prewitt: “I know where I stand. A man don’t go his own way, he’s nothin'”.

Gov. Andrew Cuomo has made his idiotic bed — now he has to lie in it. Tell me how he gets out of this. I can’t see it happening. He won’t stand for what would probably be a losing impeachment process. He’ll almost certainly walk away.

Friendo: I just watched this remarkable conversation again, taped on 5.11.68. Portions of it sound like it happened last night.

HE: Yeah, “portions.” Brando suggested that everyone should donate 1% of their incomes to MLK’s organization — an idea that melted the second it passed his lips. Like many superstars Brando was living in his own world. Compassionate and kind-hearted and far-sighted but at the same time isolated, pie in the sky, affluent indulgence, Tahiti man.

Why, incidentally, is this in black and white? The Tonight Show began broadcasting in color in September 1960.

If a 96 year-old Brando was somehow still with us, he would probably be seen more for his historic failings and foibles than his views on racism, and even if he was respected by Millennials and Zoomers he’d certainly be no fan of cancel culture fanaticism. Marlon might’ve even become a regular HE commenter. His handle could’ve been “budomaha” or “Jor-El.”

The May ‘68 reality was a full worldwide tilt (convulsive Paris protests, Prague spring, spillover from January’s Tet offensive in Vietnam, “Jumpin’ Jack Flash“, LBJ dropping out) and driven by Herbert Marcuse, Howard Zinn, the expanding psychedelic Beatles brand and the exposing of Sexy Sadie, the New Left, the wonderful abundance of cheap pot and LSD, great music and nonstop libertine celebrations. The US was engulfed that year by upheaval, confrontations, anti-war demos, urban riots, SDS, burning cities, RFK’s murder…’68 was the most tumultuous year of the 20th Century.

And what did it all produce in the end? Middle-class horror and a conservative pushback, the election of Nixon and the creation of anti-left domestic operations, the murder of Fred Hampton and a prolonging of the war until the final US withdrawal in April ‘75.

Brando obviously believed in civic consciousness and doing the right thing, but his personal life was mainly (to go by Peter Manso) about whims and urges and appetites. His career had been downswirling since Mutiny on the Bounty. He reignited in ‘72 and ‘73 with The Godfather and Last Tango. Then he went down again. He looked pretty good in ‘68 but by the mid ‘70s he’d became an irrevocably rotund Buddha figure — a prisoner of late-night ice cream raids, driven on some level by self-loathing.

But yes, certainly, of course…sitting on Johnny Carson’s couch that night he sounded clear-eyed and morally righteous and ahead of the curve.

Friendo: And then the assassination of Bobby Kennedy a month later. But what’s interesting here is the noncontroversial Carson drinking the Kool-Aid, which was huge and also a risk for him as the King of Late Night, appealing as he was to his core conservative audience of golf-playing, plaid-pants-wearing milquetoast breadwinners and their Susie Homemaker wives.