Support on Patreon Follow @wellshwood
32 Comments
People Who Get This

Start to finish, nothing seemed to enrage a certain New Jersey mafioso as much as this painting. Last night I watched that season #4 episode when Tony visited Paulie’s place and wham…the Pie-oh-My painting on the living-room wall. Paulie explained that he saw it as a portrait of a great general and his horse, and an appalled Tony stared at it, seething, infuriated…”fuck this!” Yanked the painting off the wall, threw it into a dumpster. And I couldn’t stop laughing.

Of all the first-run films playing in various uptown Manhattan theatres on 12.14.57, The Bridge on the River Kwai is the only one regarded as essential viewing among 2021 film buffs (talk about a degraded term!). Boomers and GenXers, I mean, as I doubt it has any currency among Millennials and Zoomers.

Confession: Even though it was the first film shot in Camera 65 (large format, 2.76 to 1), I’ve never once watched Edward Dmytryk‘s Raintree County, partly because it runs 182 minutes. I might give it a looksee if the rights owner would issue a decent Bluray or a digital HD rental, but right now it’s only viewable as a DVD. 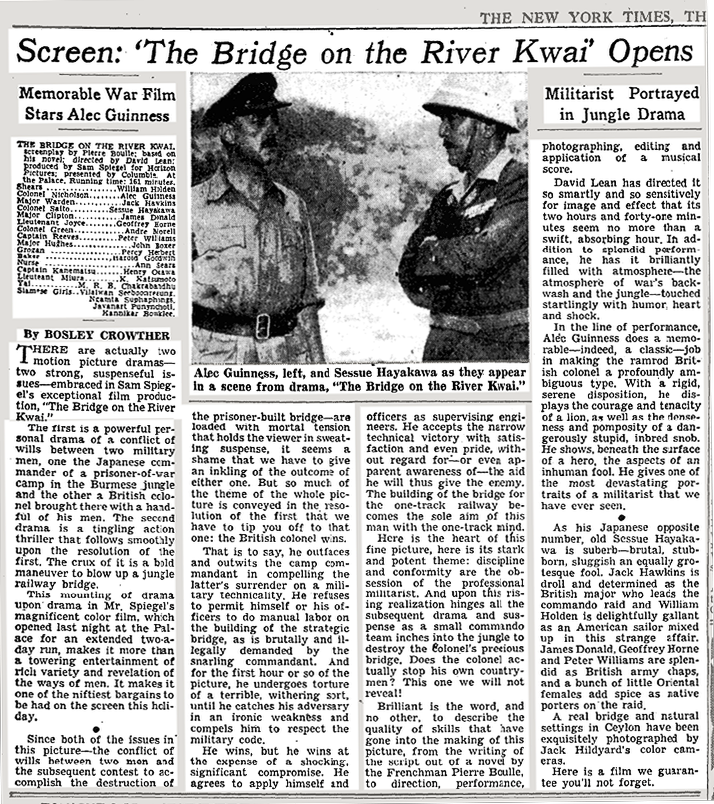 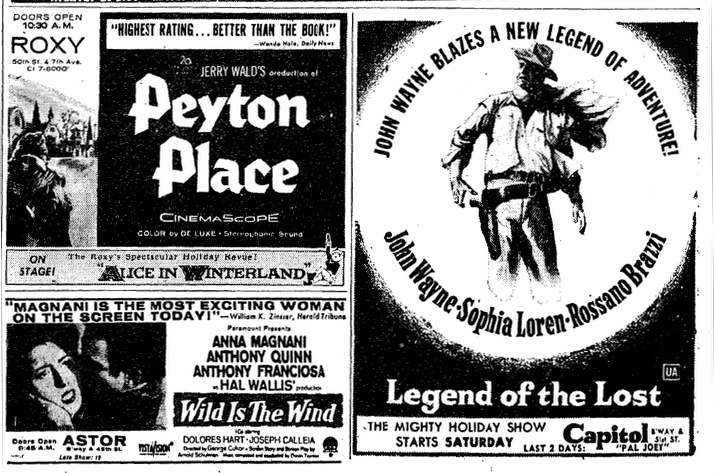 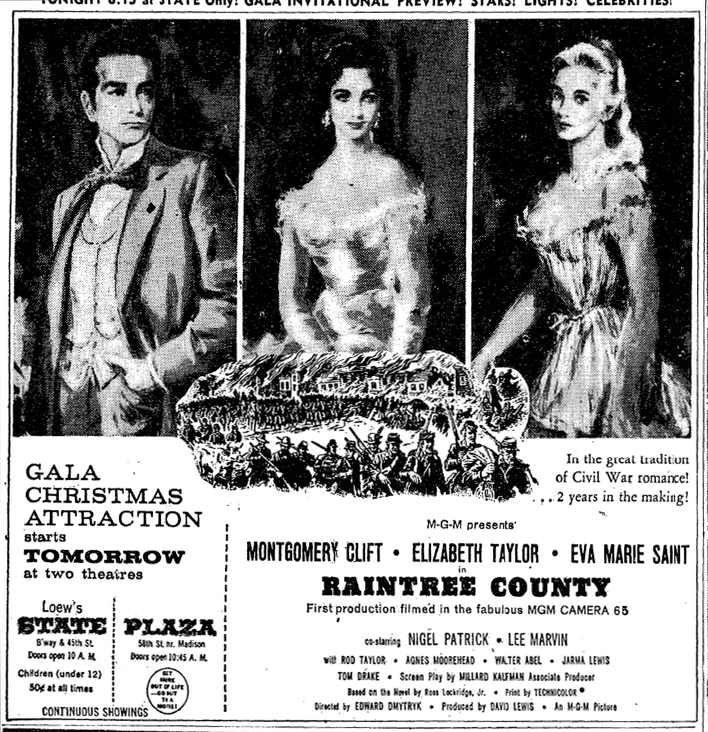 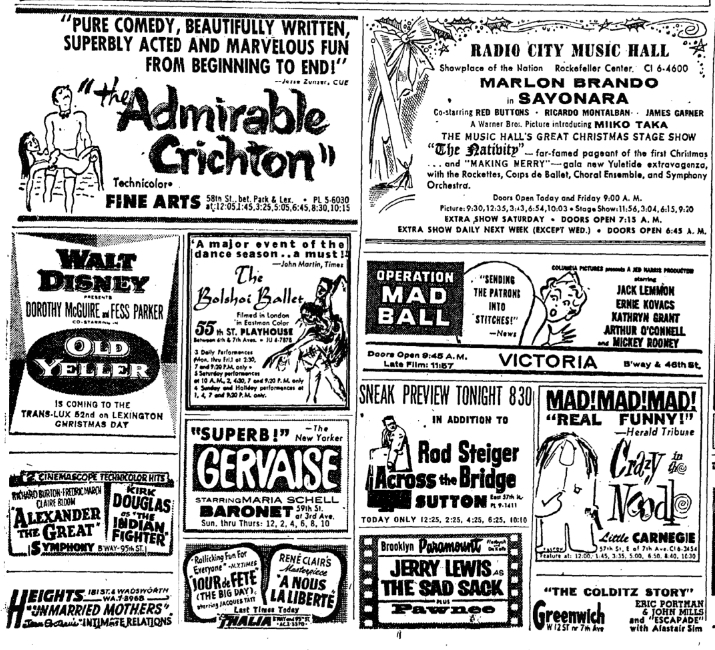 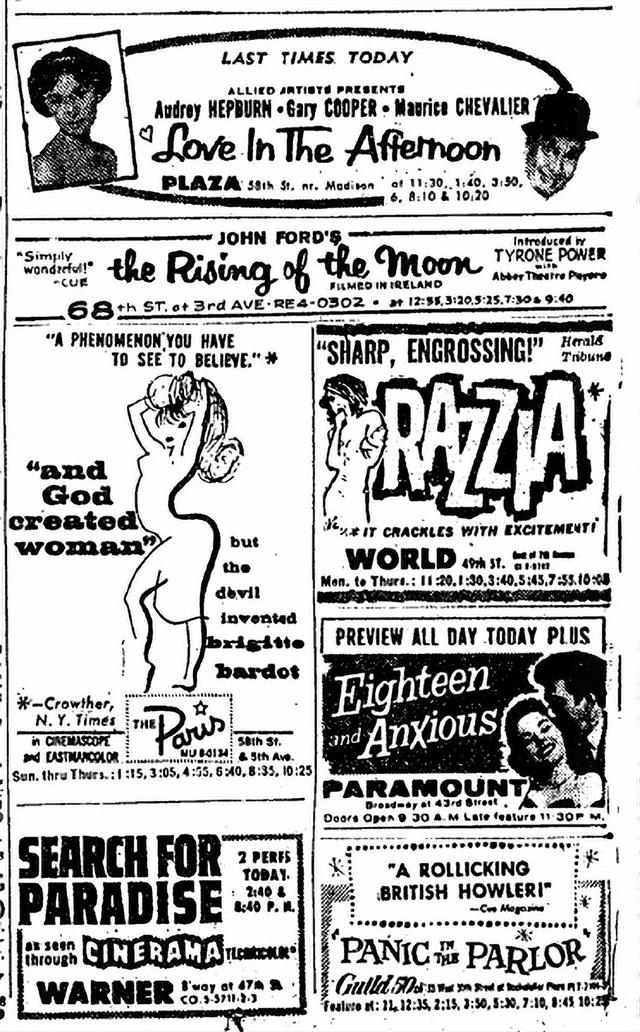 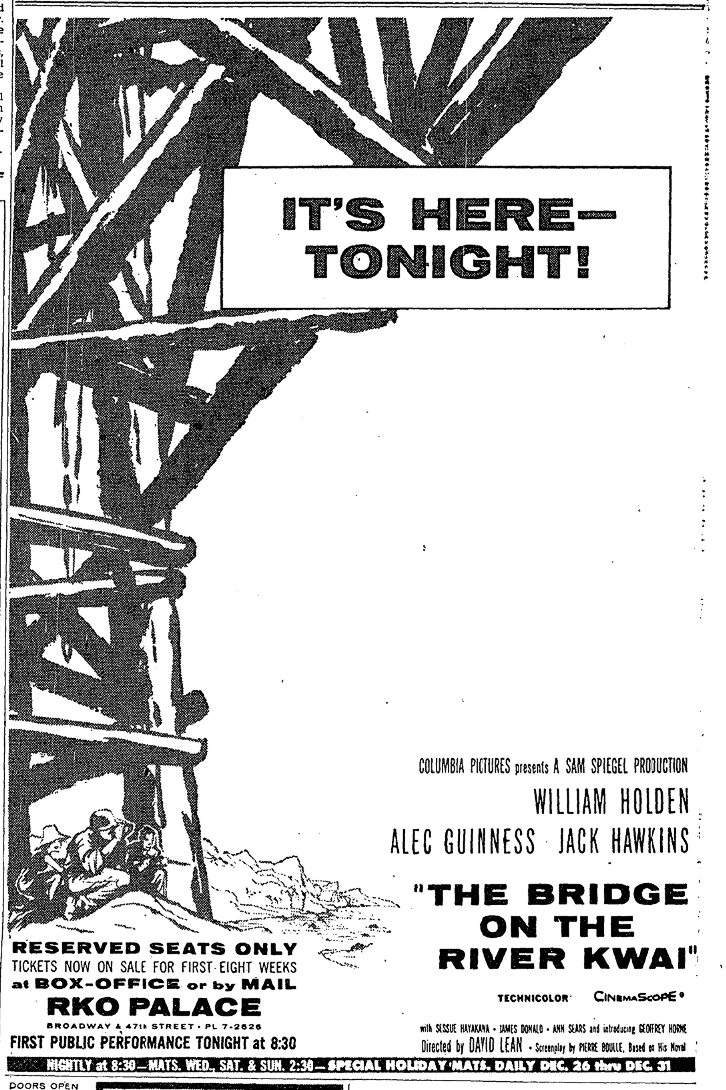 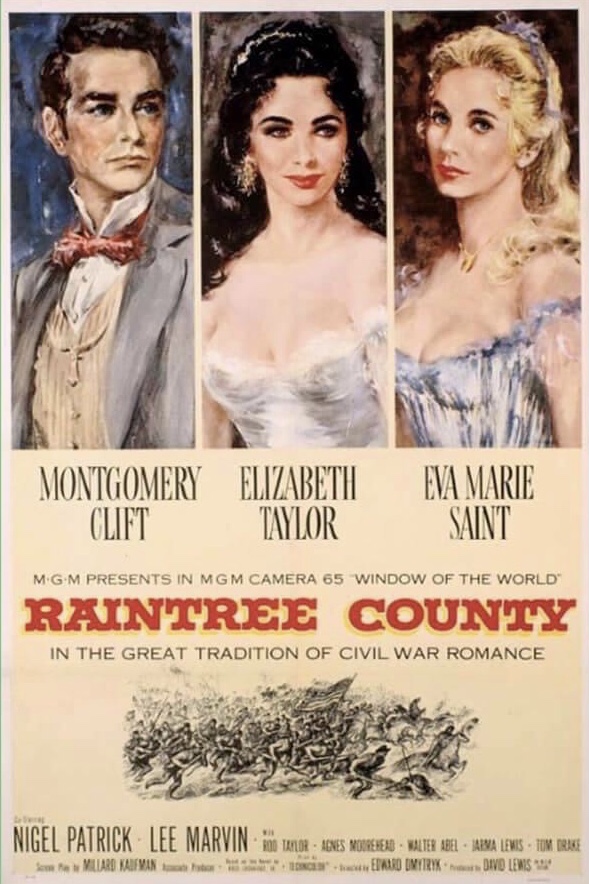 12 years ago my younger brother Tony died from a mixture of Oxycontin and alcohol. A similar lethal combo (oxymorphone with alcohol) killed director George Hickenlooper, whom I regarded as an actual friend, the following year (2010). Oxy has contributed to the accidental deaths of 500,000 persons before and since. It’s obviously a harmful substance, and we all know that some in the pharmaceutical industry pushed it like any streetcorner heroin dealer.

And yet I’m more of a libertarian than a scold about this issue. In a perfect world no one would drink or take drugs, but if someone is truly miserable (as my brother was) and wants to live inside an Oxy cocoon as a means of pain management…I think they should be allowed to go there, at least for a limited period. And if they accidentally die from this, it’ll be sad and tragic but the responsiblity would be theirs.

God knows alcohol is a worse scourge, especially in the realm of driving deaths. An estimated 95,000 people die from alcohol-related causes annually, making alcohol the third-leading preventable cause of death in the United States. And yet no one is hysterically hot and bothered about the alcohol industry.

From Owen Gleiberman‘s Variety review of Alex Gibney‘s Crime of the Century (HBO, 5.10 — 231 minutes): “’Pain relief’ sounds like an innocuous phrase out of an old Bayer aspirin commercial, but Gibney captures how the elimination of pain has been elevated, by the pharmaceutical-medical establishment, into a false American cult of wellness.

“It’s no accident that the Sackler family, owners of Purdue Pharma, advanced this way of thinking. It was more or less invented in the early ’60s by Dr. Arthur Sackler, who brought drugs into the age of advertising with the marketing of Valium. OxyContin was sold as a quality-of-life drug, which is how it hooked thousands. And that marked a paradigm shift: From this point on, you could basically walk into a doctor’s office and ask for pain relief. The Crime of the Century is a full-scale vision of how America, addicted to pain relief, embraced the corruption of legalized drug pushing.”

19 year-old Billie Eilish embraces a shaggy-ass, anti-glam, dressed-down look for the most part. Now she’s doing an icy Mae West by way of mid ’50s Jayne Mansfield on the cover of Vogue. Okay…so? Have they passed a law that guys like me need to be followers? Eilish has been happening for five or six years, but I didn’t pay attention until her “No Time to Die” single (from the still-not-released James Bond flick, due on 10.8.21) popped on YouTube. 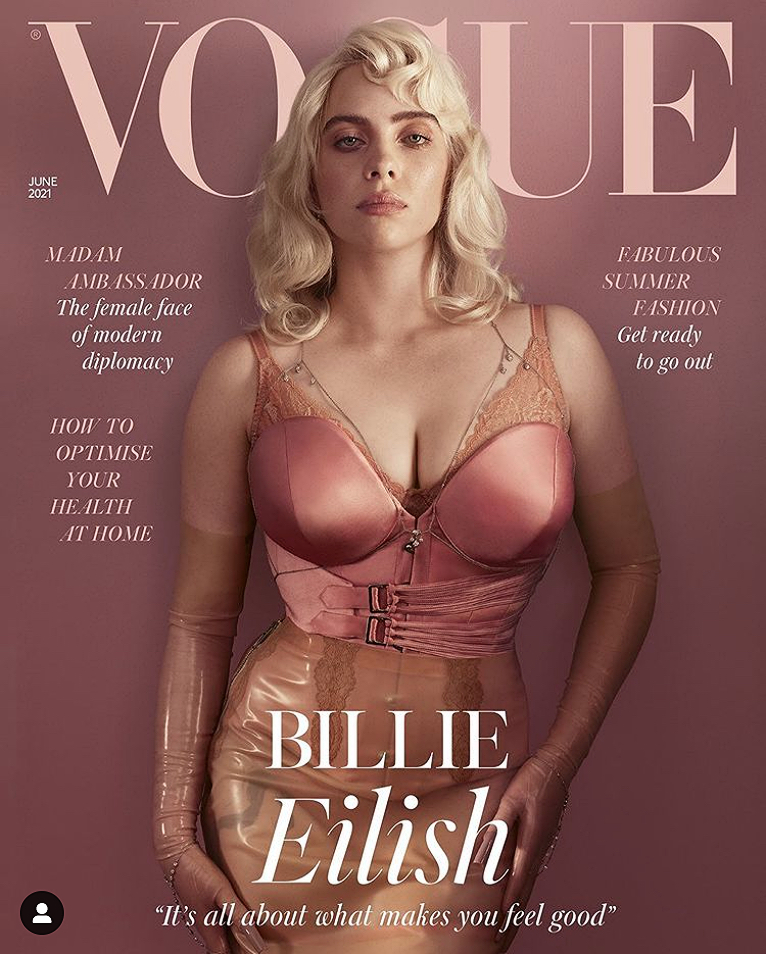 Friendo #1: “I’m certainly curious about West Side Story, but I can’t imagine it will be all that different from the original, except more muted visually. Two people who’ve seen In the Heights tell me it’s terrific and will go through the roof with audiences — and it will win all comparisons to the Spielberg.”

Jett and I saw the 2009 West Side Story revival at the Palace (B’way and 47th), where Judgment at Nuremberg and The Bridge on the River Kwai played reserved seat engagements in ’61 and ’57, respectively. I had never seen it onstage, and my basic responses were (a) “Well, I’ve finally seen it performed on stage!’, (b) “Very professional enterprise, and obviously more authentically ethnic in terms of Puerto Rican characters and dialogue,” (c) “I was impressed but not blown away,” (d) “Who was that little twerpy guy playing the imaginary son of Tony and Maria?”

Friendo #2: “I have high hopes pinned on In The Heights and West Side Story, although I’ve long regarded the latter as a weak piece of storytelling with great songs, and I’m not sure if Tony Kushner is going to be able to fix that. What put West Side Story over, when it first emerged in the paleolithic era of Elvis Presley and Dwight D. Eisenhower, was that exotic concept — switchblade-wielding street gangs, modern-dance mode, Romeo and Juliet. But exotic concept does not automatically = interesting or well-told story.”

Six weeks ago: “For months I’ve been thinking that Quiara Alegría Hude and Lin-Manuel Miranda‘s In The Heights (HBO Max, 6.18) may be a better, more rousing thing than Steven Spielberg‘s West Side Story (20th Century, 12.10), which I’ve been secretly scared of for a long time.”

“The original West Side Story B’way musical is over 63 years old, having came out of the Upper West Side tenement jungle of the early to mid ’50s. In The Heights is based on a 2007 Off-B’way show, and is therefore at least part of this century.”

A friend says he’s heard “mixed” responses. Like what? Too pop-fizzy? Too synthetic? “All of that,” he replied. “Overlong, poorly paced, fails at character development.”

In a 3.7.19 clip of Vincent D’Onofrio on the Rich Eisen Show (3.7.19), he recounts a making of Full Metal Jacket story that I’d never heard before today. It starts at 5:10, lasts for just under two minutes, and is definitely worth your time.

We all understand that Mickey Rourke‘s golden movie-star period spanned from ’81 to ’88 — Body Heat, Diner, Rumble Fish, The Pope of Greenwich Village, Year of the Dragon (“mood hair”), 9 1/2 Weeks, Barfly, Angel Heart, A Prayer for the Dying (“yes, fah’uhr”) and the respected, under-seen Homeboy.

The boxing period started sometime in the late ’80s, and then came the cheek implants and other facial tough-ups. Rourke began to look like a different person — that Diner guy hadn’t aged as much as suffered a transformation into something mottled and re-sculpted.

Then come a series of not-good-enough flicks — Johnny Handsome, Wild Orchid, Harley Davidson and the Marlboro Man, Michael Cimino‘s Desperate Hours, White Sands, etc. Rourke briefly “came back” with his Oscar-nominated performance in Darren Aronofsky‘s The Wrestler (’08). My favorite Rourke moments of the last decade came from his YouTube putdowns of Donald Trump.

Rourke was exquisite in Body Heat — the right age, a perfect look, authentic street attitude, a gentleness. When I think of classic Rourke I think of the triumvirate of Body Heat, Diner and Angel Heart.

Pauline Kael on early Rourke: ‘He has an edge and a magnetism and a pure, sweet smile that surprises you.”

Bob Dylan on Homeboy: “[Rourke] could break your heart with a look. The movie traveled to the moon every time he came onto the screen. Nobody could hold a candle to him. He was just there, didn’t have to say hello or good-bye.”

Welcome back to Marvel Children’s Day Camp…a place for family, fables, hugs, caresses and reassuring fantasies…a Shangri-La for open-hearted saps and simpletons who want need simulations of magic and wonder in their lives. That craggy-voice narrator sounds a bit like Hyman Roth, but it’s Stan Lee, of course.

Actual YouTube comments: (a) “That was beautiful. The fact that the MCU started over a decade ago and yet we’re still glued to the screen is a feat in itself. Honestly wishing I wouldn’t die until I’m like 80 only if to see how it all unfolds”; (b) “I teared up when Black Panther: Wakanda Forever showed up. WHAT A F**KING GOOD TRAILER THIS WAS!”; (c) “I cried hearing Stan Lee talk…the man helped create a movement”; (d) “Did anybody else have the shivers for 3 minutes and 22 seconds like me?! MISS YOU, STAN THE MAN”; (e) “When I saw the title Black Panther: Wakanda Forever, I couldn’t hold back the tears.”