Remember when disappearing from a set was regarded as a Bryan Singer behavior?

Posted on 2.3.21: Hollywood Elsewhere saw Sian Heder‘s much-adored, Sundance award-showered CODA this morning. It’s moderately appealing and nicely made for the most part. Understand, however, that it’s an “audience movie” — aimed at folks who like feel-good stories with heart, humor, romance and charm.

But it’s an okay thing for what it is. It works here and there. It didn’t give me a headache. I can understand why some are enthusiastic about it. It deserves a mild pass. Heder is a better-than-decent director.

Most name-brand directors, producers and actors enjoy 12-year streaks when everything is cooking and breaking their way. Some directors and actors are lucky enough to last 15 or 20 years or even longer. Your task, should you choose to accept it (and I know I’ve posted about this before), is to list any number of Hollywood heavyweights and when their 12-year hot streaks (or better) happened.

Cary Grant peaked from the late ‘30s to late ‘50s. James Cagney between Public Enemy and White Heat — call it 20. James Stewart between Destry Rides Again and Anatomy of a Murder — 20. Clark Gable’s hottest years were between It Happened One Night (‘34) and The Hucksters (‘47). Humphrey Bogart happened between High Sierra / The Maltese Falcon (‘41) and The Harder They Fall (‘56) — a 15-year run. Robert Redford peaked between Butch Cassidy (‘69) and Brubaker and Ordinary People (‘80) — 11 to 12 years.

No harm, no foul…and it’s probably about as good as Antoine Fuqua‘s The Magnificent Seven (’16), which I called “cheap dogshit.”

For me the stand-out element is Zack Sharf’s IndieWire story about same — ‘The Harder They Fall’ Trailer: Netflix Western Unites Majors, Elba, King, Beetz, Lindo, Stanfield — which posted this morning at 8:15 am. At no point in Sharf’s story is there an acknowledgement that this is a western about an all-black gang (or gangs). Sharf notes that Netflix is calling this a “new school Western,” but that’s as far as he’ll go. The implication is that it’s somehow racist (or racialist) to acknowledge the basic shot here. Weird.

Synopsis: “When outlaw Nat Love (Jonathan Majors) discovers that his enemy Rufus Buck (Idris Elba) is being released from prison he rounds up his gang to track Rufus down and seek revenge. Those riding with him in this assured, righteously new school Western include his former love Stagecoach Mary (Zazie Beetz), his right and left hand men — hot-tempered Bill Pickett (Edi Gathegi) and fast drawing Jim Beckwourth (R.J. Cyler) and a surprising adversary-turned-ally. Rufus Buck has his own fearsome crew, including ‘Treacherous’ Trudy Smith (Regina King) and Cherokee Bill (LaKeith Stanfield), and they are not a group that knows how to lose.”

Brian Wilson: Long Promised Road premiered at the Tribeca Film Festival in June 2021. It follows Brian and Rolling Stone editor Jason Fine as they drive around Los Angeles and visit locations from Brian’s past. The Rotten Tomatoes rating is currently 100%.

I was living in an upstairs one-bedroom apartment at 948 14th Street in Santa Monica, doing nothing, working as a tree surgeon…my lost period. (I began my adventure in movie journalism the following year.) Right below me lived a guy named Eddie Roach and his wife Tricia. At the time he was working with the Beach Boys as a kind of staff or “touring” photographer. Dennis Wilson fell by two or three times and hung out a bit, and one time I was part of a small group that played touch football with him at a local high-school field. Dennis mocked me that day for being a bad hiker, which I was. (But Dennis was a dick… really. Insecure machismo, didn’t like him, felt nothing when he died.)

Then he stopped again and started laughing like a ten year-old drunk on beer: “Hah-hah, heh-heh, heh-heh!” and then right back into the song without losing a beat. Really great stuff. Who is this guy?

I grabbed my cassette recorder and went outside and walked down the steps leading to Eddie’s place, and I laid it down on one of the steps and started recording. I must have captured two or three minutes worth.

Then I decided to knock on Eddie’s door and pretend I needed to borrow a cup of milk or something. I had to know who the piano guy was. Eddie opened the door and I said “hey, man,” and in the rear of the living room stood a tall and overweight Brian Wilson. He was dressed in a red shirt and jeans and white sneakers, and was cranked and excited and talking about how great some idea might be, gesturing with his arms up high. Then he saw me and almost ran over to the doorway.

I suddenly knew who it was and it was a huge internal “whoa!” Wilson looked like a serious wreck. His hair was longish and sort of ratty looking. His unshaven face was the color of Elmer’s Glue-All, and his eyes were beet red. I didn’t mean to disturb the vibe but a look of faint surprise or shock must have crossed my face because Wilson’s expression turned glum. It was like he suddenly said to himself, “Wow, this guy’s some kind of downhead…everything was cool until he showed up.” Eddie spotted it too and said, “Sorry to disappoint you.” I said everything was cool and retreated back upstairs. 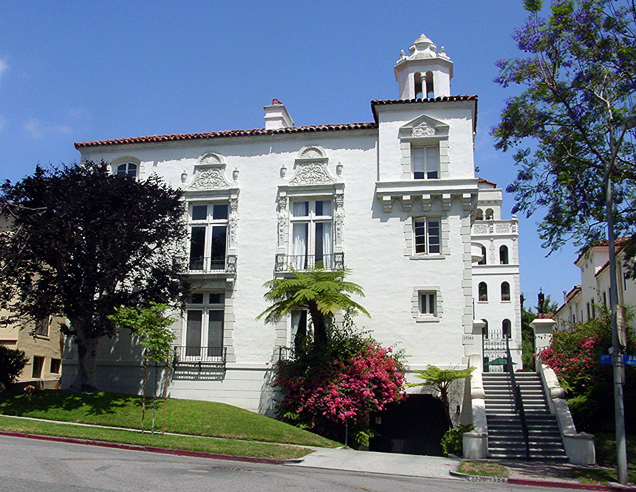 Leos Carax’s Annette (7.6.21, France) is an English-language musical set in Los Angeles that will feature original music from the ’70s rock band Sparks. It’s a love story about a stand-up comic (Adam Driver) and an opera star (Marion Cotillard). Completed in November 2019, pic will be told almost entirely through song, in classic rock opera tradition — all singing, all of the dialogue (or 95 % of it), “but in a way that’s stylistically true to Sparks’ sensibility, so if you can imagine that, Adam Driver doing Sparks, that’s what we have.”

The architect, the construction foreman…somebody will have to swing for this.