Antoine Fuqua and Jake Gyllenhaal‘s The Guilty (Netflix, 10.1 — currently in theatres) is a fairly exacting remake of Gustav Moller’s same-titled original, which starred Jakob Cedergren as a suspended beat cop working as a 911 call-center responder, and dealing with an apparent abduction of a youngish mother by her ex-husband.

I watched Moller’s film before the Fuqua, and I’m telling you right now that the Danish version is way better. Like Moller’s, Jake and Antoine’s version is a single-set thriller that’s all closeups and MCUs and computer screens. The Moller takes place in a Copenhagen call center; the Fuqua-Guyllenhaal is set inside a Los Angeles complex during a major fire and is constantly reaching for the big moments, and is marred by Gyllenhaal’s over-acting.

Moller’s version unfolds in a straight, matter-of-fact fashion — the story happens on its own terms and the suspense isn’t diminished by the subdued tone.

I’m sorry that Fuqua didn’t tell Gyllenhaal to turn it down and ease up. The result is too much sweating, too many hostile outbursts, and too much showboat weeping at the end.

And speaking of weeping, Riley Keough‘s voice performance as the abducted wife is infuriating as she cries and whines and moans in a one-note way. Her character has every reason to feel traumatized and terrified, of course, but the Danish actress in the same role (Jessica Dinnage) occasionally downshifts and delivers a change-up or two, and is much more interesting for that.

As the 45-minute mark in the Fuqua version approached, I was muttering to Keough “Jesus, can you deliver one line of dialogue without sounding like Minnie Mouse on a bad acid trip, fighting back the terror and the tears?”

Peter Sarsgaard, Ethan Hawke, Eli Goree and Paul Dano also do some voice-acting, but there’s no recognizing them.

Middle-Aged Bond Villain
I honestly believe that the only option right now for Dear Evan Hansen's Ben Platt is to play psychopaths, murderers, Wall Street scumbags and oily manipulators. He could play Rami Malek's role in No Time To Die. If Platt could be time-machined back to '85 or thereabouts he would be a perfect substitute to play Paul Reiser's "Burke" in Aliens. Tell me I'm wrong. Login with Patreon to view this post
September 24, 2021 4:32 pmby Jeffrey Wells
3 Comments
Thine Will Be Done

Paul Verhoeven‘s Benedetta (IFC Films, 12.3) won’t open for another two and half months, but like many films that have been in the oven for a long time and promoted heavily for months on end, I’m starting to feel as if I’ve already seen it. Although the factors that led IFC Films to decide on a December opening probably weren’t extraordinary, a voice is telling me it should come out sooner. 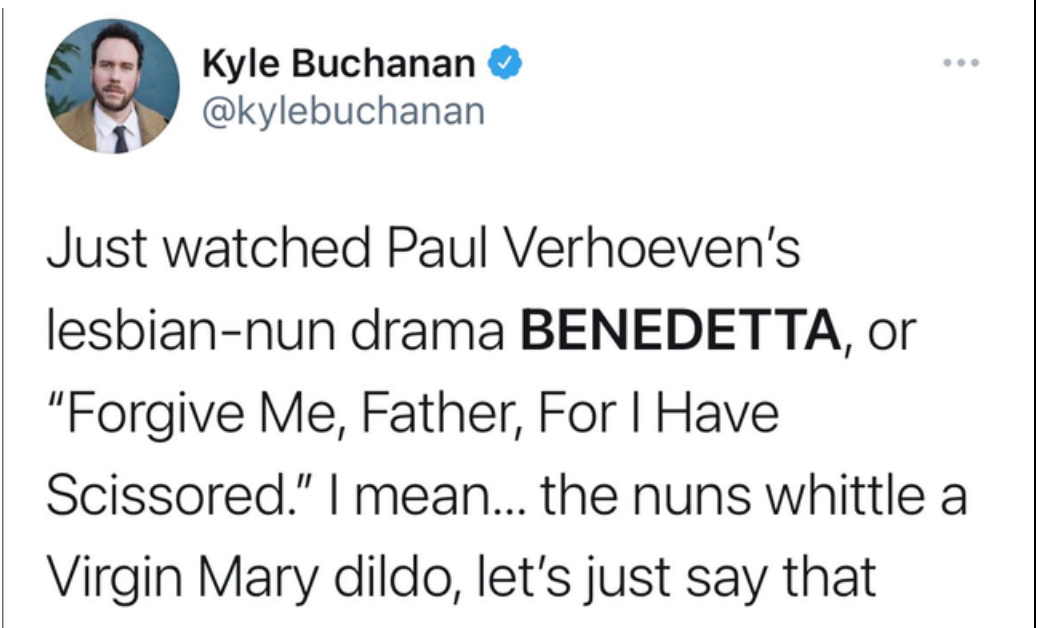 With the exception of Screen Daily‘s Stephen Whitty, the critics who’ve seen Joel Coen‘s The Tragedy of Macbeth via the New York Film Festival are not only admiring but in some cases highly enthused.

How does this square with the fact that nothing came of a months-old screening for Cannes topper Thierry Fremaux, and the fact that the Venice Film Festival committee didn’t care for it, and declined to invite it to the recent 2021 gathering.

Variety‘s Owen Gleiberman and THR‘s David Rooney found Coen’s film impressive. To go by their reviews, The Tragedy of Macbeth sounds respectable enough. Perhaps not to everyone’s liking, but certainly a film with integrity and a certain scheme. And yet Venice turned it down.

Nonetheless something about these upbeat notices feels a tad suspicious. Robert Daniels calling it “definitely the bleakest adaptation” of Shakespeare’s tragedy prompts the inevitable “okay but why?” Macbeth isn’t bleak and bloody enough on its own? How does Coen’s decision to make his Macbeth stark and stripped down and lacerating…in what way does this approach enhance the material?

Roman Polanski’s 1971 version of this melancholy masterpiece was and is a knockout on so many levels, and yet critics at the time were partly dismissive because they didn’t care for Polanski having injected his own personal tragedy (i.e., the savage murder of his wife and her housemates two years earlier) into the film. And yet, perverse as this sounds, Polanski’s history gave his Macbeth an urgency and an attachment to the early ’70s zeitgeist; in this context very much alive.

What igniting element has prompted Joel Coen’s film other than wanting to give his gifted wife (Frances McDormand) a chance to play a great role? No Country for Old Men was a superb suspense film about a stalking killer, but it was also about a certain cultural poison that, in the view of original author Cormac McCarthy, had begun to infect the water table. What is informing Coen’s Macbeth in this sense? What’s the echo factor? Does it have one?

Friendo: “It’s no secret that pandemic-era film critics have veered towards hyperbole and over-praising certain films. I wouldn’t be surprised if that’s the case with Macbeth, but I’m very excited to see it. Visually, it looks stunning.”

In the unlikely event that Joe Biden decides against running in ’24, Kamala Harris somehow snagging the Democratic nomination for President would absolutely ensure a Republican win. I admire and respect Harris, but she just doesn’t have it. Even if Donald Trump becomes her Republican opponent…I actually don’t have a reading on that hypothetical race, but God help us if that were to happen. Let’s imagine that Biden declines to run for whatever reason — which potential Democratic candidate could step in and win?

11 Comments
Reaching Out To Idiots

BooneOakley‘s “Don’t get vaccinated” van campaign, which happened last Sunday in Charlotte for only a few hours, should be used nationwide. Earnest pleas to millions of Covid vaccination skeptics to please reconsider and take the stab have not worked among certain pockets of rural white bumblefucks, African Americans and Hispanics so maybe a sardonic negative approach will get through to more of them. (Charlotte vaccinations have reportedly risen around 20% since last weekend.) As we speak roughly 182 million Americans — 54.8% of the population — have been fully vaccinated, although 77% of U.S. adults have received at least one dose.