I’m less than five minutes into The Many Saints of Newark, and right away I’m uncomfortable and even thrown by Michael Imperioli’s narration from beyond the grave a la William Holden in Sunset Boulevard.

The film should remind us of The Sopranos and thereby put us at ease, and this opening bit feels like a bone tossed to those who don’t know the series and need to be brought up to speed. Feels inorganic. Narration is often used when a story has failed in one way or another. Here you go.

Small thing: In The Sopranos the 70something Junior Soprano (born around 1930) was played by Dominic Chianese — glasses, cueball, white sidewalls. Corey Stoll plays the late 30ish-40ish Junior in Many Saints, (’67 to ’71), also cueballed. Did he ever have a little hair? If I’d directed I would’ve had makeup give Stoll a thinning thatch, like Chianese had in The Godfather, Part II (’74).

9 pm update: The ending of Many Saints doesn’t launch young Tony on his journey — it doesn’t point to his destiny as a Jersey crime-family boss. Assuming ownership of a certain character’s wedding ring — that doesn’t imply anything.

Many Saints shot principal photography between April and June 2019. Some additional stuff was shot in September 2020.

I have a strong hunch that the added material included those prison visiting room scenes between Liotta and Alessandro Nivola’s Dickie Moltisanti. They don’t seem to organically flow or arise from anything in the Many Saints narrative. They’re just plopped in like scoops of ice cream into a glass of milk.

…are what cinched the Best Actor Oscar for the late Phillip Seymour Hoffman. His Truman Capote performance was so on-target that when I think of the Real McCoy I often flash on “Philly.” Everyone always points to the “weeping just before the Kansas hanging” scene, but these two are more subtle and more affecting at the same time.

Especially Capote’s dinner-table recollection about the death of his mother during the making of Beat The Devil, and particularly the inability of her widowed husband to handle his own grief. The non-verbal reaction of Chris Cooper‘s Alvin Dewey is perfect.

My admiration of Peter Weir‘s The Year of Living Dangerously (MGA/UA, 12.16.82) was immediate and unqualified. Probably the sexiest film ever about a wet-behind-the-ears journalist in an exotic, tinder-box situation — an adult-level thing, a gradually inevitable love story, a feeling of engagement on all levels, highly emotional toward the end.

Apart from the cardinal sin of having been made by white guys (which of course makes it a racist film…right, asshats?), The Year of Living Dangerously is easily among the greatest Asian-set moral and ethical dramas of its type. Where does it rank alongside Phillip Noyce‘s The Quiet American, Francis Coppola‘s Apocalypse Now, Joshua Logan‘s Sayonara, Oliver Stone‘s Platoon, etc.?

My last viewing was on laser disc in the early ’90s (I think) but I haven’t re-watched it since. Which is odd. I don’t like admitting this, but the reason I’ve stayed away is Linda Hunt‘s “Billy Kwan” character. The notion of Billy, a wise and perceptive man about town if there ever was one, suddenly succumbing to despair and offing himself over the excesses of Sukarno-influenced corruption has always struck me as crudely manipulative and un-earned. That hectoring little voice with the deep register, that haughty judgmental moralizing, that glare of outrage…bullshit.

But otherwise a haunting watch with a great Maurice Jarre score**, and certainly with a grand romantic ending.

Yes, Virginia — big studios actually supported and promoted this kind of film from time to time. Not often but it happened.

** I thought for sure the composer was Vangelis, but I was wrong.

Note to HE community: Please pay attention to this post, but especially to the final five paragraphs — thank you.

Yesterday Gordon Klein, a veteran professor at UCLA’s Anderson School of Management, posted an essay on Bari Weiss’s Substack about being hounded and threatened by campus wokester fanatics for not going along with a suggestion (contained in a 6.2.20 letter from a “non-black” student of Klein’s) that he grade his Black students with “greater leniency than others in the class” because, you know, they have it tougher than white students and need all the support they can get.

Excerpt from 6.2.20 letter: “The unjust murders of Ahmaud Arbery, Breonna Taylor and George Floyd, the life-threatening actions of Amy Cooper and the violent conduct of the [University of California Police Department] have led to fear and anxiety which is further compounded by the disproportionate effect of Covid-19 on the Black community.

“As we approach finals week, we recognize that these conditions place Black students at an unfair academic disadvantage due to traumatic circumstances out of their control.” 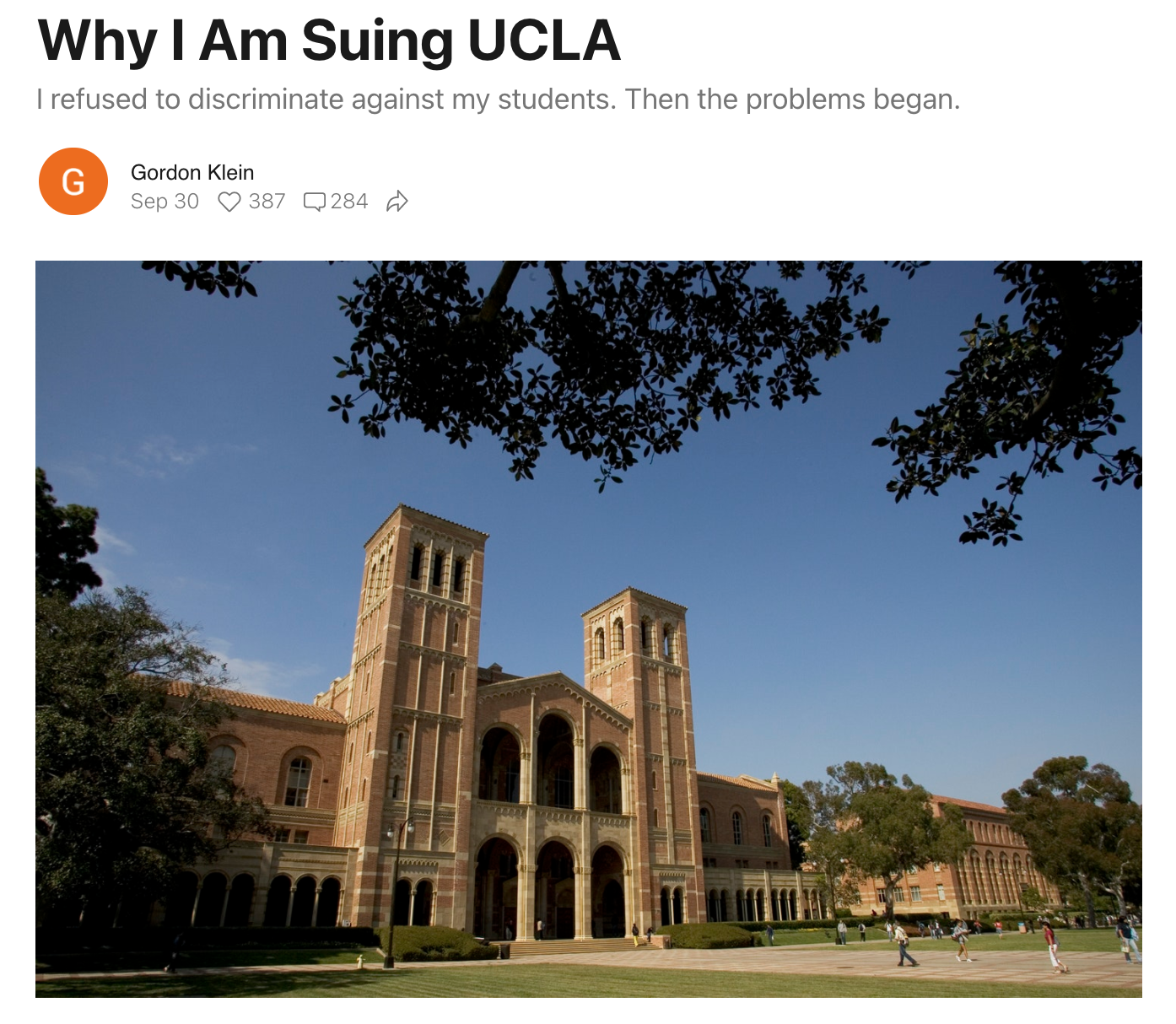 In other words, the white student was claiming, Black students are too socially handicapped and emotionally traumatized to get their shit together and study and apply themselves to the curriculum. Given all the social and psychological pressures, the only decent thing to do is give them a pass if their grades aren’t up to snuff.

More specifically, the final exam that Black students take should be a “no harm” exam — one that would be counted only if it boosted one’s grade.

Klein found this suggestion appalling, and as a result was subjected to a campus-wide hate and removal campaign in which he was tarred and feathered as “woefully racist.” This was followed by a suspension on 6.5.20, followed by a near-firing. He is now suing UCLA over this whole affair.

I was struck by this episode because it reminded me of a similar incident that happened when I was in 11th grade in Wilton High School — a critical year in terms of grade-point averages and applying to various colleges. I had been earning poor grades in everything except English composition and gym, and so I wrote a letter to the WHS principal and others in charge, pleading for leniency because I had it tougher than other students due to (a) an abusive alcoholic father, (b) a bad case of low self-esteem, (c) an inordinate aversion to boring classes, and (d) a deep-seated preference for listening to rock music.

I know this sounds satiric, but I did have it tougher than others back then. Or so I believed.

Excerpt from Wilton high-school letter: “The unjust, bloody beating that I received from my father when I was 16, along with various psychological pressures impacting my teenage mind…various forms of emotional torture, sexual intimidation by hot girls who haven’t found me sufficiently attractive, and the traumatizing conduct of the Wilton Police Department in their brutal confiscations of cases of beer, [confiscations] that have deprived me and my friends of the pleasures of getting buzzed on weekends, not to mention the fear and convulsions caused by the disproportionate effect of primal sexual urges that plague me night and day…

“As Wilton juniors approach finals week, I’m requesting that you recognize and sympathize with the fact that the afore-mentioned pressures and conditions, all of which are out of my control, have placed me at an unfair academic disadvantage. I therefore request that Wilton High School allow me to take ‘no harm’ final exams in my various courses — ones that would be counted only if they boost my grade.”

Wilton administrators refused my request, and soon after my life took a turn for the worse. It took me years to recover and take a stab at movie journalism. It is my earnest hope that present-day college professors and department heads and deans can see past the brusque and dismissive attitudes of the past and urge that all attending Black students to be treated with appropriate scholastic leniency.

Huddled Away in Exurbia
I visit and re-visit Mark Harris's "Mike Nichols: A Life." It's obviously been thoroughly researched and Harris has always been a smooth and engaging writer (and I love the chapter on the making of Who's Afraid of Virginia Wolff) but for whatever reason I can only digest a modest portion at a time. And then I nod off or get distracted and wander away and forget about Harris-Nichols, and then, a week or a month later, I'll start reading again. And always late at night.