What phrase comes to mind when you think of Justin Bieber, who’s married and 27? The phrase that comes to my mind (and I acknowledge it’s not as current as it could be) is “obnoxious party animal to whom much wealth and media attention have been given.”

For what it’s worth, I’ve despised the idea of Bieber from the get-go (i.e., the start of the Obama administration). Here we are 11 years later, and his name still does the trick.

The gist of “Ghost,” a just-released Bieber song, is that Justin misses his smiling, recently deceased grandfather “more than life.” And so he chooses to celebrate the fragile, all-too-briefly-enjoyed gift of life with his hat-wearing, Tom Ford-glasses-wearing grandma, played by Diane Keaton.

Has a grandson ever melted down this much over the death of a grandparent? If there’s one thing that was drilled into my early childhood, it was the unfortunate fact that grandparents pass on sooner rather than later as a rule. Even the most naive grandsons are acquainted with this sad inevitability, and generally respond with a nodding acceptance.

I’ve never once heard or read about a grandson being, like, gutslammed and shattered to pieces by the passing of a grandparent. Saddened and grief-struck but not decimated. It hurts but you know it’s coming, like leaves turning yellow and falling from trees.

Three things have stuck in my mind about the late Hugh O’Brian, the Life and Legend of Wyatt Earp TV star who passed five years ago at age 91. I should have shown proper respect with a brief obit at the time, but at least I’m saying something now.

Thing #1: A Time magazine item about O’Brian and the Earp show (‘55 to ‘61), and the line “rhymes with burp.” (What the hell did that mean? Who knows but Time printed it.). Thing #2: The long-barreled Buntline special that was mythically (i.e., inaccurately) associated with Earp, largely due to O’Brian’s show. Thing #3: A capsule profile or mini-biography of O’Brian that said he regarded his considerable Earp earnings as “fuck-you money” — I don’t know the origin of that term, but it might have begun with O’Brian.

Observed this morning on Brighton Way in the spirit-of-Dubai shopping district of Beverly Hills. “Flying off the shelves,” according to the woman minding the store.

Imagine being on your death bed at age 89, and telling yourself that you not only made a difference in your career but nudged things along in a human artistic and evolutionary sense when you played a female pinhead in a Hellraiser film.

In a 40-minute conversation with N.Y. Times columnist Kara Swisher, Matthew McConaughey has discussed his feelings about running for Texas governor. They basically boil down to “I don’t know, man…maybe if God gets into it and points to me and says ‘this guy…this guy can save us from the insanely polarized left-right extremes so vote him in and follow his ass’…otherwise I don’t know.”

If and when he becomes governor, McConaughey doesn’t want to just go through the motions. He wants to be a practical-minded poet philosopher slash earthy gov-bruh…a centrist reformationist blend of Sam Houston, George Washington and Martin Luther.

McConaughey #1: “One side I’m arguing is ‘exactly, that’s why you need to go get in there.’ The other side is ‘that’s a bag of rats, man. Don’t touch that with a 10-foot pole. You have another lane. You have another category to have influence and get done things you’d like to get done and help how you think you can help and even heal divides.'”

McConaughey #2: “Is that a place to make real change or is it a place where right now it’s a fixed game, you go in there, you just put on a bunch of band-aids, in four years you walk out and they rip them off and you’re gone? I’m not interested in that.” 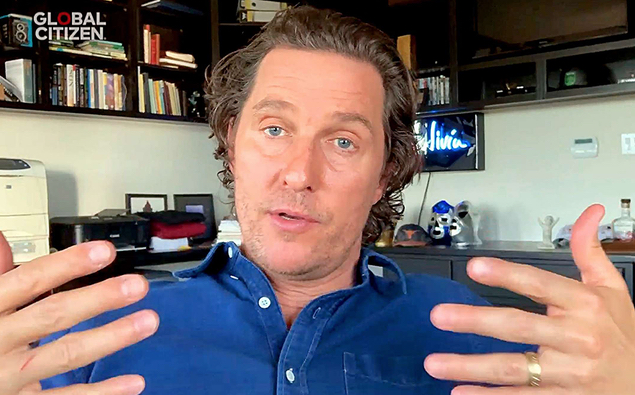 In other words, MConaughey is more comfortable riffing on the idea of being Texas governor than actually trying to win the damn job. He doesn’t want to get his hands dirty by diving into the wrestling pit.

McConaughey is right in implying that lefty wokesters and righty Trumpsters are equally horrible, and he’s probably correct in saying that trying to rouse and activate the “sleeping giant” of centrism is the way to go now.

McConaughey #3: “People want a third party and we’ve got one and it doesn’t have a name right now and it is the majority. I’m hesitant to throw labels…but there is a sleeping giant right now. I think it’s necessary to be aggressively centric to possibly salvage democracy in America right now.”

McConaughey #4: “The left and right traffic is so far to the edge, their tires are not even on the pavement. They’re not riding the road of democracy, I don’t believe.”

There’s a two-word term that applies to McConaughey in the realm of Texas politics. That term is “honestly flakey.”

Give McConaughey credit for loving the word “partook”. And for saying “bag of rats.” That’s the best “bag of”expression I’ve heard since “bag of gas,” an Entertainment Weekly term that referred to Robert Redford‘s The Legend of Bagger Vance.

Many of us are deeply grateful to Dave Chappelle for being a staunch realist and a dedicated foe of wokester terror. In my heart of hearts and dream of dreams, Chappelle leads us out of this horrible nightmare. Not in a militant sense, but simply by being cool and sensible and unruffled.