Support on Patreon Follow @wellshwood
42 Comments
“All This Bullshit”

“The Matrix: Regurgitations is a fucking ridiculous disaster of a film…that reads like a piece of clumsy fan fiction, written by a sweaty, overweight teenager from 2004…it accomplishes absolutely nothing….never should have been made.” 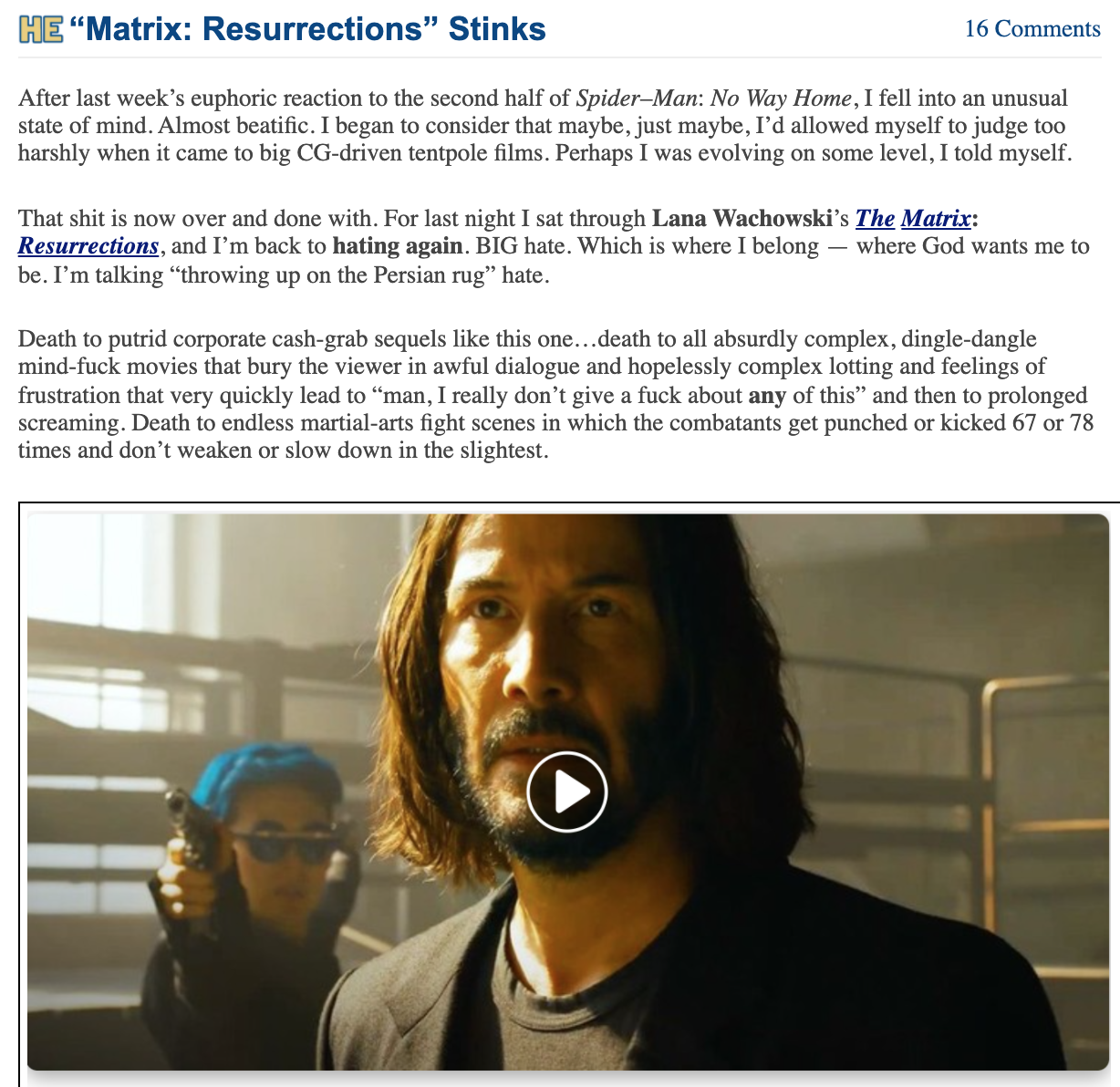 I was diagnosed with Omicron eight days ago and had more or less shed the effects of the virus by last Friday (12.24). The CDC says if I’m triple vaxxed and masked I’m good for roaming around and shopping, etc. I’m now triple bullet-proofed (three stabs + naturally enhanced post-Covid defenses + German genes) — less likely than ever to succumb.

Recalling Tobe Hooper
Four years and four months ago, Tobe Hooper died at age 74. There's no question that Hooper did himself proud with The Texas Chain Saw Massacre ('74), a low-budget slasher thriller that I've never liked but have always "respected". The following Wikipage sentence says it all: "It is credited with originating several elements common in the slasher genre, including the use of power tools as murder weapons and the characterization of the killer as a large, hulking, faceless figure."

It remains a sturdy, absorbing, culturally fascinating, Sidney Lumet-like depiction of the rise and fall of heroin importer Frank Lucas (Denzel Washington) and the scrappy, scrupulously honest detective, Richie Roberts (Crowe), who eventually busted and prosecuted Lucas in ’75 and ’76.

AG opened 14 years ago, and plays just as grippingly as ever — no diminishment, constantly engaging, stepped in the lore of Harlem and North Jersey. And my God, Denzel (52 during filming, now 67) looks so young! Younger, in fact, than he did in Spike Lee‘s Inside Man (’06). And what a murderer’s row of African American (or African British) players — Chiwetel Ejiofor, RZA, Cuba Gooding Jr., Joe Morton, Idris Elba, Common, the late Clarence Williams III, Ruby Dee, Roger Guenveur Smith, Malcolm Goodwin.

I was struck again by how satisfyingly well made this film is, as good in its own New York City way (the clutter and crap of the streets, high on those uptown fumes) as Lumet’s Prince of the City (’81).

One reason it plays so well, I was telling myself last night, is that big-studio movies, free from the influence of the superhero plague that was just around the corner in ’06, were generally a lot better in the aughts than they are now. 2007, remember, was one of the great all-time years.

…for the coming Democratic Party apocalypse is the anti–meritocracy education thing (i.e., deliberately lowering standards to make things more accessible for students of color). Instructing students about the history of American racism is a vital and necessary thing, but telling parents of smart or otherwise gifted students that merit and scholastic aptitude have no value or place in today’s system because we need to give less advantaged kids more of a chance…this + “parents need to butt out of this as their concerns are imaginary plus professional educators know best”…that is a FUCKING DEATH BOMB.

An excerpt from a 12.28 Matt Taibbi article titled “The Democrats Education Lunacies Will Bring Back Trump”: 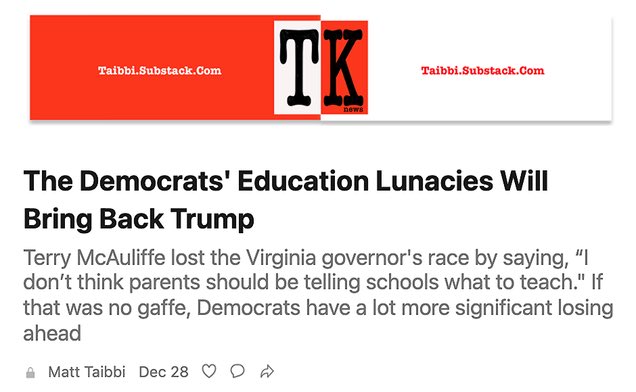 Join This Boycott
...and in so doing proclaim your hyper-sensitivity and woke assholery for the benefit of all your social media pallies. I’ve half a mind to drive to Westwood to pay to see Paul Thomas Anderson’s modest and meandering period dramedy again, as a way of saying “many of us hear you, MANAA homies…we get what you’re saying, but PTA was being honest to the period, you see, and his refusal to follow the presentism crowd is an honorable thing.”

No Comments
If Andy Warhol Were Still With Us

…and if he still cared about creating silk screens at age 93, he would have instantly recognized a couple of days ago that THIS (i.e.., the TMZ headline) is a 21st Century Andy Warhol silk screen classic if anyone ever saw one. Right up there with “Elvis Presley in Flaming Star.”