The second thing I’d say would be “if you’re relatively healthy or at least not obese or a cigarette smoker, Omicron isn’t anyone’s idea of agony. It’s three or four days of exhaustion and sniffles and achey muscles…basically a serious bout with a cold. I just went through it. I wouldn’t call it a walk in the park — I was definitely under the weather — but it wasn’t that bad.”

At some point the mind isn’t as whip-sharp as it used to be…nothing wrong with a video-screen karaoke prompter. Recorded 30 years ago (’91 actually) for MTV Unplugged. For whatever reason I’d never watched this until today.

…you need to do it precisely and carefully, working your way up from the bumblefuck small fry and then to the medium-size conspirators and then to the Bannons, Meadows and Hannitys, and gradually focusing upon an air-tight case against the salivating Beast of Mar a Lago.

Even if — hello? — the entire civilized world of sane and sensible people has known all along that the Jan. 6th uprising was fully and entirely instigated by that beast…we’ve known that all along, for God-in-heaven’s sake.

“The actions we have taken [against January 6th felons and instigators] thus far will not be our last. The Justice Department remains committed to holding all January 6th perpetrators, at any level, accountable under law, whether they were present that day or were otherwise criminally responsible for the assault on our democracy. We will follow the facts wherever they lead.” — Attorney General Merrick Garland speaking earlier today about Jan. 6th prosecutions — past, present and future. 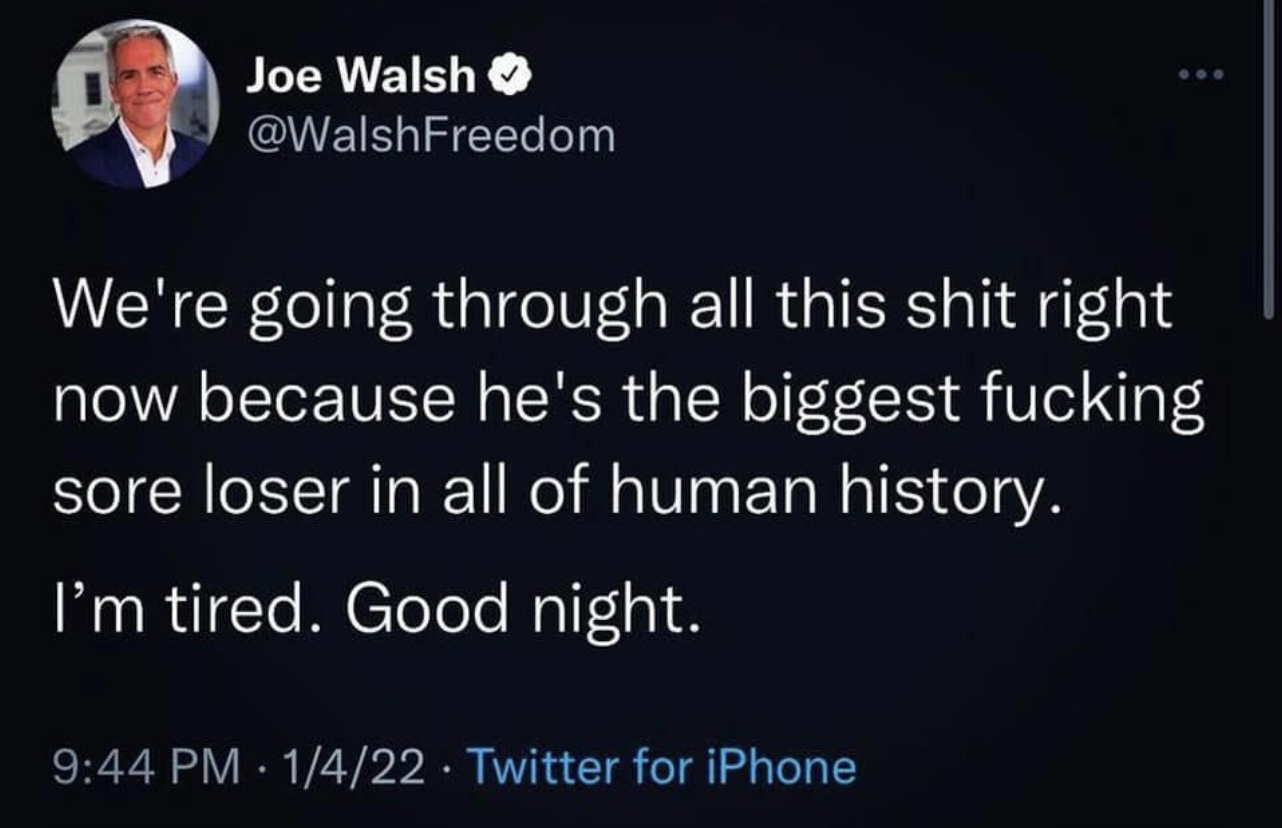 I was first out of the gate on 12.20.21, Gleiberman followed 11 days later later (12.31.21) and Stone followed Gleiberman three days after his post. Gleiberman is the heaviest hitter among us, agreed, and his Variety think-piece essays are confined to a weekly format.

Others have since picked up on this notion (in some cases disputing it, especially among the advocates of hothouse-flower nominees) but WE STARTED IT! Just saying!

Not Even A Dab of Mustard?
I don’t like to smother hot dogs. I don’t like the idea of stuff falling out or dripping onto the paper plate. But a few shards of onion shavings and maybe an ultra-light lathering of chili…that works. Betty White was strictly no-frills…no nothin’, just the dog. Login with Patreon to view this post
January 5, 2022 1:58 pmby Jeffrey Wells
8 Comments
Too Bad, Sundance 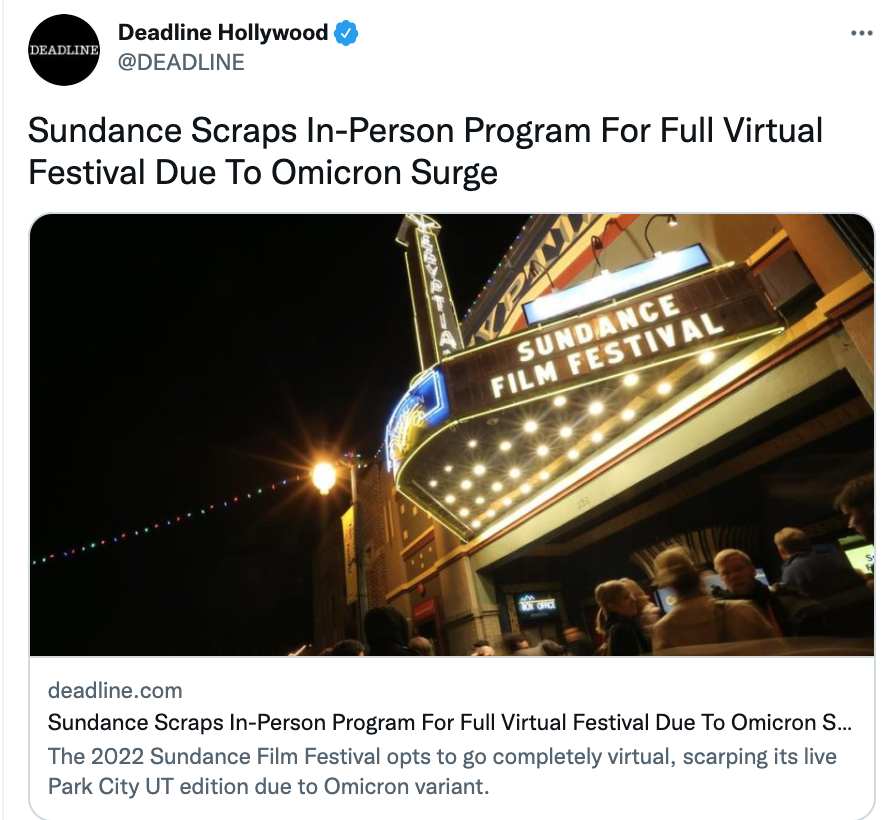 The Grammys have also deep–sixed themselves.

Rain Man kicked Cage’s ass during filming of the recently wrapped Butcher’s Crossing. Oddly, The Harder They Fall‘s Majors claims to have ridden the same damn horse, albeit an older, more mild-mannered version despite this happening during the fall of 2020 (i.e., a year before Cage came along).

THR needs to get together with a reality show producer and organize a Rain Man Challenge. Cage, Garfield, Dinklage, Rex and Majors are flown to Billings and each take their turn with Rain Man on the open range. (Or inside a large corral…whatever works.) The actor who creates the most profound bond with this angry horse and thereby “whispers” him into an alpha state will win the grand prize. 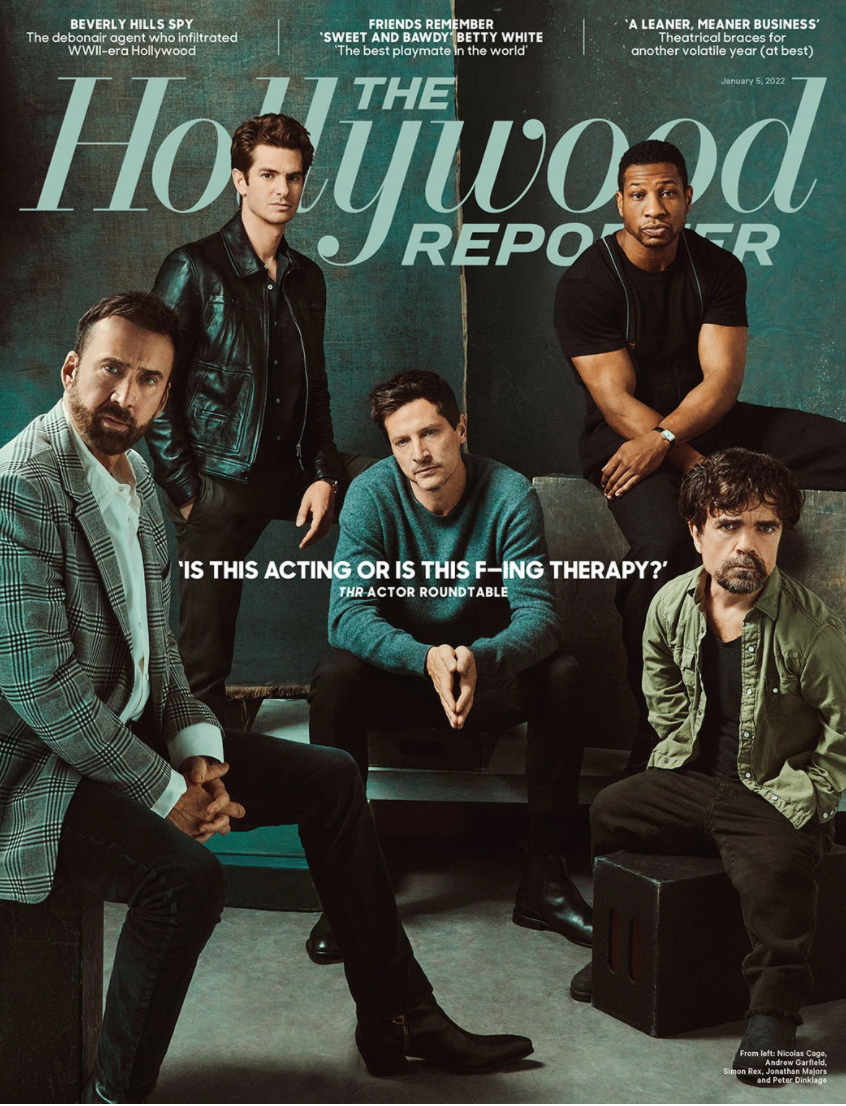 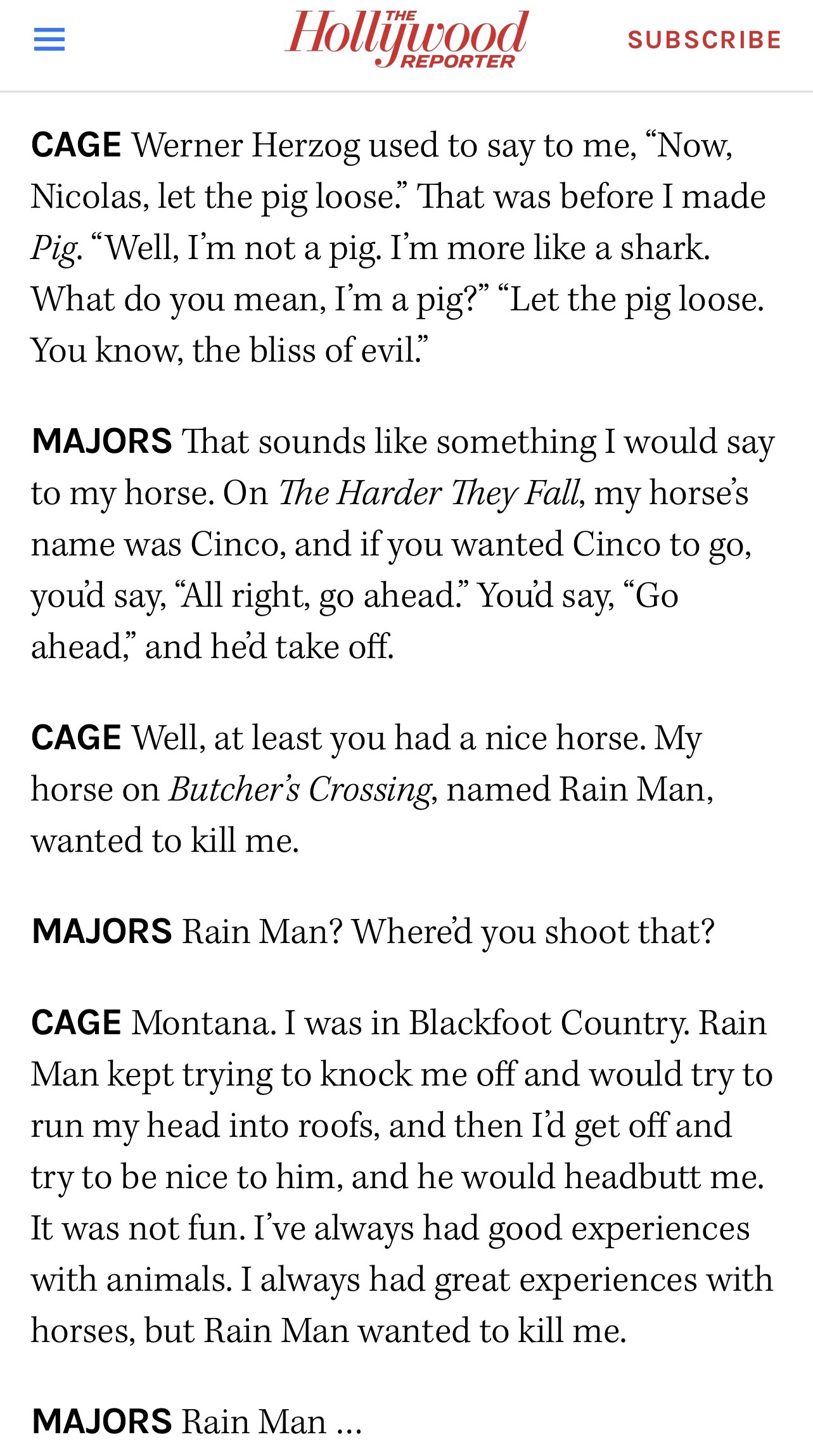 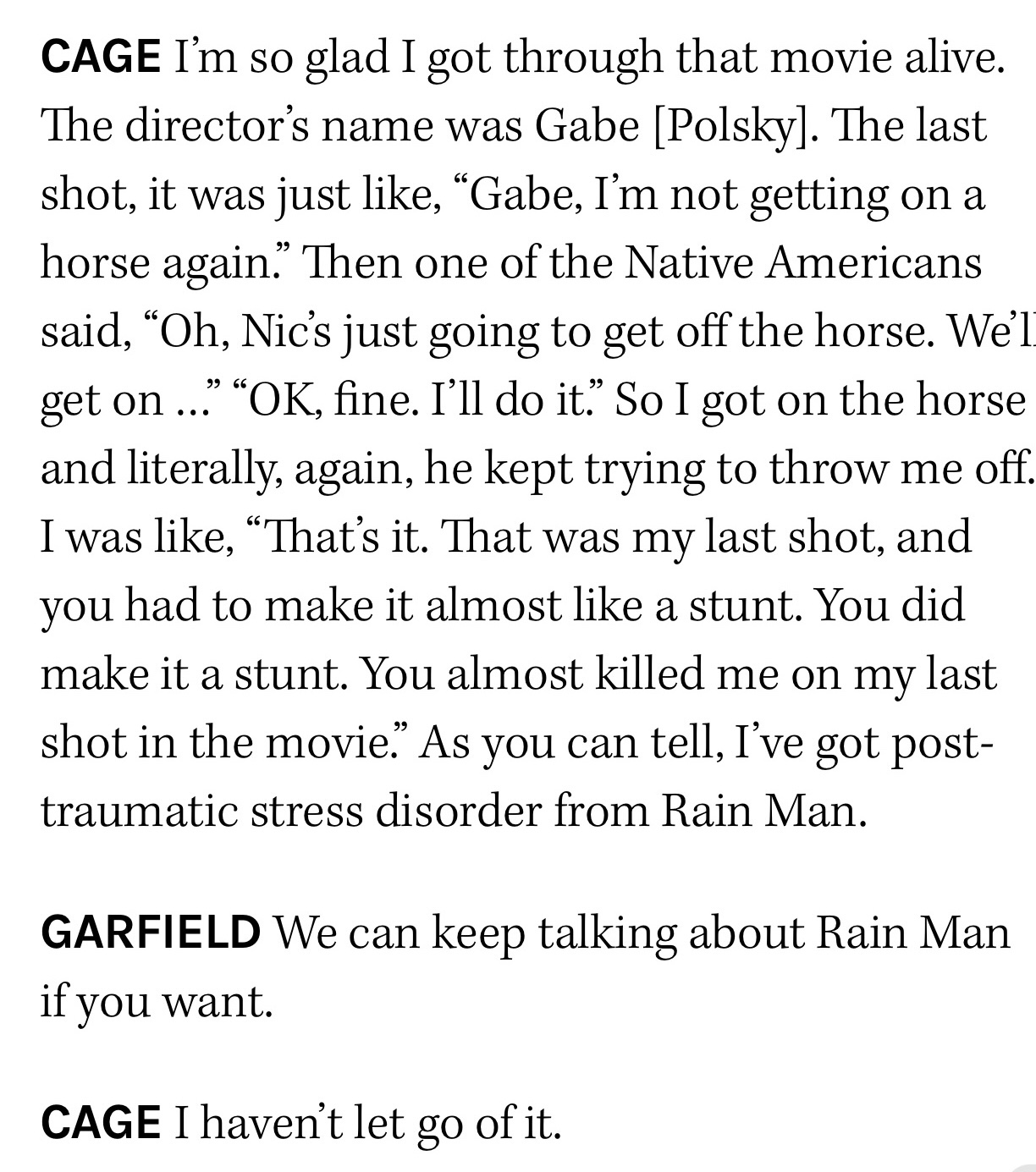 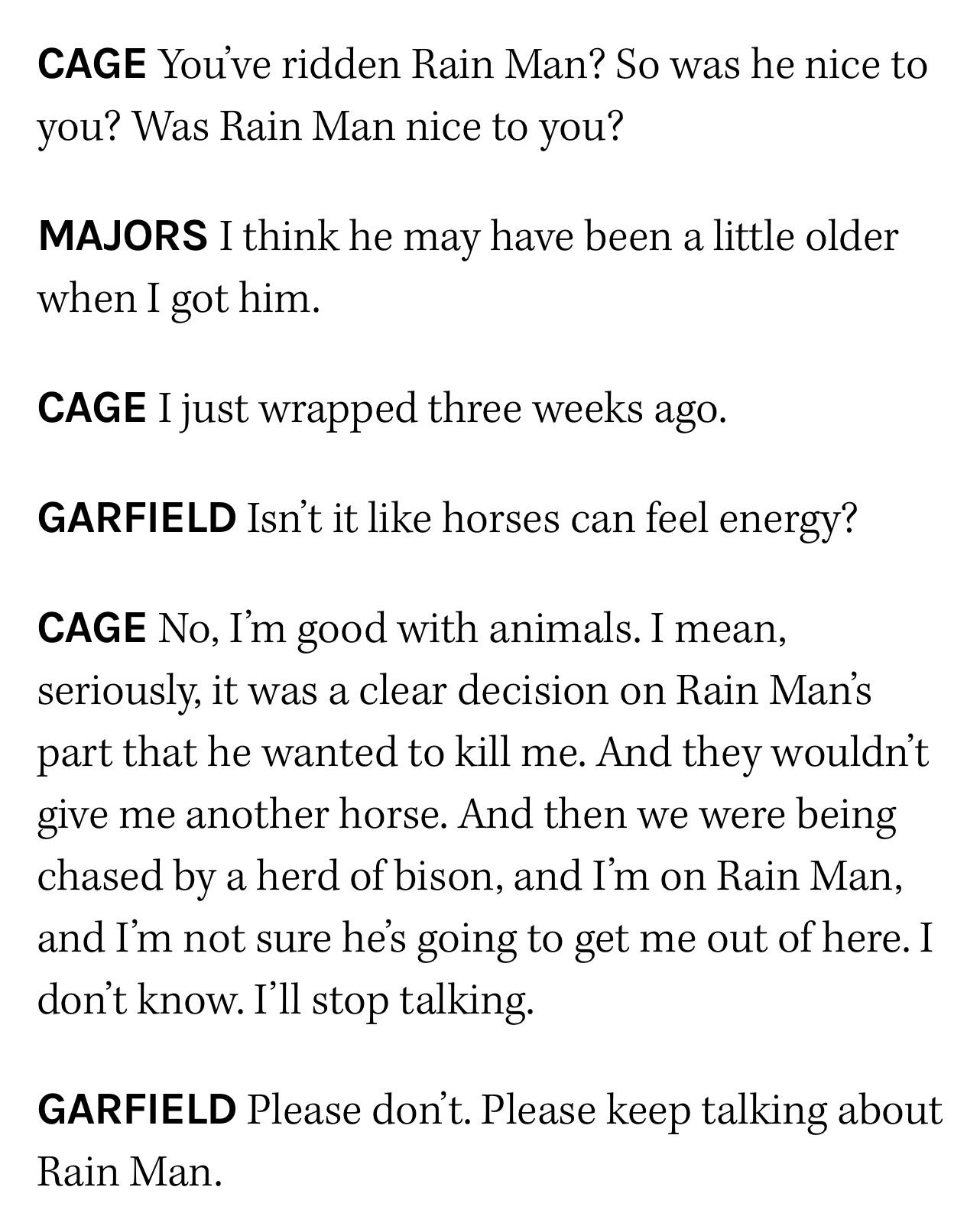