Five months ago Noyce’s film played at the Toronto Film Festival as Lakewood. Now it’s got a catchier title. Here’s my 9.21 review with the title switched out:

An adult all alone and on a phone, having to talk his or her way out of (or through) a tough, high-pressure situation. I don’t know how many times this set-up has been built into a compelling feature, but I’m thinking at least four**.

Now there’s Phillip Noyce‘s The Desperate Hour, which stars Naomi Watts as Amy, a widowed, small-town mom reacting not only to news of a Parkland-esque high school shooting, but to the possibility that her sullen and estranged son Noah (Colton Gobbo) may be involved in some way.

Nearly two-thirds of this 84-minute film (47 minutes) are focused solely on Amy and her iPhone in a remote wooded area. We’re talking about a torrent of smooth steadicam footage plus several overhead drone shots and some elegant editing (kudos to Lee Haugen), plus Watts stressing, emoting and hyperventilating her head off — a one-woman tour de force.

Right away I was thinking Noah might be the shooter, and that, you bet, made me sit up and focus all the more. And that’s all I’m going to say.

My second reaction was about Amy’s iPhone, and what an amazing reach it has. She’s in a woodsy area a few miles from town (I didn’t catch how many reception bars were showing) and yet she experiences only a couple of signal drop-outs, and she’s watching all kinds of video and whatnot without a hitch.

I was also impressed by her iPhone’s battery — what power! (I never leave home without a back-up battery for my iPhone 12 Max Pro — I have too many active apps and the battery is always draining hand over fist.)

Despite all that’s going on at the high school and having to juggle all kinds of incoming info, Amy continues to jog during most of her phone marathon.

If there’s one thing that viewers will be dead certain of, it’s that Watts will stumble and suffer an ankle injury. I was telepathically begging her not to. HE to Watts: “C’mon, stop…don’t…there are all kinds of obstacles on your forest path and you obviously need to focus so just start speed-walking”…down she goes!

The pace of The Desperate Hour is very fast and cranked up, and Amy is nothing if not resourceful. She manages to persuade an auto mechanic whom she doesn’t know to supply crucial information about Noah’s whereabouts, as well as info about a possible shooter’s name and contact info. All kinds of conversations and complications ensue, and you’re always aware that Chris Sparling‘s script is determined to increase the stress and suspense factors.

Most of these efforts felt reasonable to me, or at least not overly challenging or irksome. The Desperate Hour is a thriller. I didn’t fight it. I accepted the rules and requirements.

Living, the Ikiru remake that played Sundance ’22 last weekend, has been acquired for distribution by Sony Pictures Classics.

Living is a fine, honorable, occasionally touching film but not, I submit, the masterpiece that some have called it. It didn’t strike me as some kind of enhancement or special strengthening of the original 1952 Akira Kurosawa classic; it struck me as maybe a little more than a tasteful remake, but not much more than that. I respect and approve of Living. Can we let it go at that? 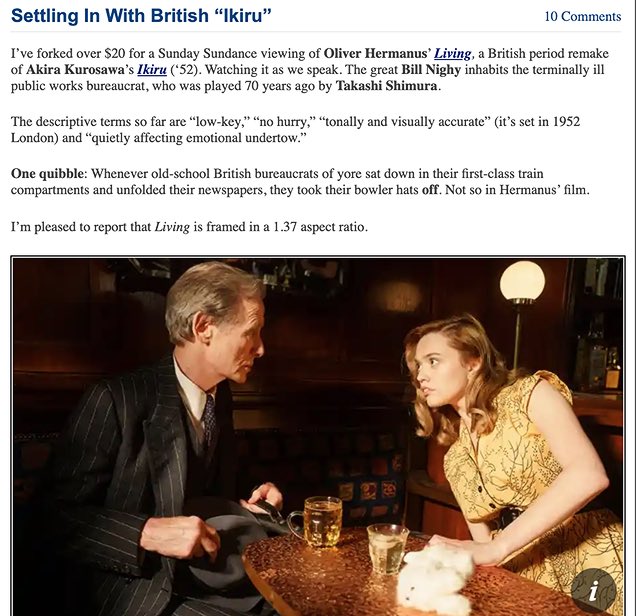 In a Best Picture Oscar spitball piece, IndieWire’s Anne Thompson has called Spider-Man: No Way Home a “long shot”. She has this deeply emotional, hugely successful Sony release in 20th place — a lower ranking than those shared by THR‘s Scott Feinberg or TheWrap‘s Steve Pond, but in the same ballpark.

Thompson’s top-ten noms are purely about safety, purely about raising a damp finger to the wind and adding her voice to the chorus of conventional thinkers.

I know that I speak for hundreds of industry veterans by saying that the elite Feinberg-Pond-Thompson mindset being knocked off its axis would be absolute heaven.

Please consider clapping your hands in order to tell this crew how full of shit they are. Peter Pan author James M. Barrie once urged audiences to clap in order to keep Tinkerbell alive — I’m asking the same thing here. Vote for the millions of younger ticket buyers out there, for those who’ve paid to see S-M: NWH more than once because it pushes a button that they wanted pushed before they knew it. Vote to show respect for a film that falls short of profound art but which really turned them on. That means something.

If Blanche Dubois had the floor, she would urge the following to Academy and guild members: “Don’t hang back with the snoots!”.

Broad Side of a Barn
Not once in my life have I spoken the anachronistic term "broad". It's been out of circulation for decades, and yet in 2005 Urban Dictionary posted the following definition: "Word for a woman. Less respectable than lady but much more respectable than bitch. As in 'Man, look at those two broads...they are smokin'!" Login with Patreon to view this post
January 25, 2022 4:21 pmby Jeffrey Wells
No Comments
Dylan Wells To The Rescue

The Austin-residing Dylan Wells stepped in today and solved the agonizing missing-comments Patreon problem** that has been plaguing Hollywood Elsewhere for more than a week. Other well-meaning tech guys tried to fix the issue and failed. This is the difference between being a professional-level tech guy and a genius-level one. Dylan reports that a Disqus update caused the problem. Hollywood Elsewhere is enormously thankful to Dylan for “slaying the dragon,” so to speak.

Dylan’s summary of the problem that no longer exists (thank God):

Jiminy Cricket’s Uncle in Fascist Italy
How curious that a new teaser for Guillermo del Toro's animated re-telling of Pinocchio focuses not on Geppetto or his carved-wood son Pinocchio or the kids turned into donkey slaves, but on a sophisticated insect Sebastian J. Cricket, obviously related in some way to Jiminy Cricket. Login with Patreon to view this post
January 25, 2022 2:52 pmby Jeffrey Wells

No Comments
God in Heaven

I’ll tell you right that John Cameron Swayze Mitchell looks too skin-and-bones to play Joe Exotic, who’s always had roundish, semi-jowly features. Kate McKinnon as Joe’s nemesis Carole Baskin…I’m fine with that. With McKinnon, not the show. I hate watching egoistic with horrible taste in clothing and hairstyling lowlifes make their lives even lower.

From Sam Tonkin’s 1.24.22 story in London’s Daily Mail, “Futuristic flying ‘AirCar’ that can transform from a road vehicle into a plane in under THREE MINUTES is certified to fly after passing safety tests in Slovakia“:

“AirCar certification opens the door for mass production of very efficient flying cars,” said Professor Stefan Klein, AirCar’s inventor, the leader of the development team and test pilot. “It is official and the final confirmation of our ability to change mid-distance travel forever.”

“The project’s co-founder Anton Zajac said: “Fifty years ago, the car was the epitome of freedom. AirCar allows us to be free again.”