Top Of My List
"Every day at 5pm Andrew, a middle-aged man working a white-collar job in a community legal centre, drives home through Melbourne’s outer suburbs in peak-hour traffic. The long commute affords him time to phone in on his ailing mother and his wife, and occasionally offer a lift home to a younger colleague, David. Login with Patreon to view this post
June 20, 2022 3:01 pmby Jeffrey Wells
No Comments

Excellent Carlin Recall
I've only watched half of Judd Apatow's George Carlin's American Dream -- maybe this Muhammud Ali clip is part of it. I wouldn't know. Login with Patreon to view this post
June 20, 2022 2:44 pmby Jeffrey Wells
No Comments
Why Are Divorces So Expensive?

Answer: Because they’re worth it.

On the subject of tweeners and young teens behaving in a way that has struck some as impossibly entitled and impudent and fickle…”a whole field of fucking brats”, Adam Carolla says the following at the 11:15 mark:

“We used to have a heirarchy. For instance, when I grew up I was scared shitless of every one of my friends’ dads. You would never…I was in my house a year and a half ago, and one of my daughters’ friends roller-skated past me in my house…can you imagine roller-skating in a friend’s house when we were nine or ten years old?….you go into the kitchen now, just randomly walking into your kitchen and one of your kid’s friends will just be making waffles…when we were kids, on the very off chance that we might go out to dinner?…no one wanted our input as to what restaurant we’re going to…now the conversation starts with “we’re going out to the restaurant” and the kid says “I don’t want Mexican food”…when we were growing up it was “we’re going out to dinner, we’re fucking lucky, zip it.

“The key component [today] is ‘you fucked up the kids, you fucked up your own life, and you’ve fucked up society because [somebody] will have to hire one of these little fuckers when they turn 22.'”

No Comments
“And For Every Hung-Up Person…”

Remember hang-ups? In the ’60s accusing a person of being hung up was a fairly serious put-down. Hang-ups were a key definer of middle-class neurotics — people who were into guilt and maintaining appearances, who embraced shallow concerns and inhibitions — people who believed in scrubbing kitchen floors and mowing their lawns on Saturdays, who did’t get high or drop acid or listen to Bob Dylan or attend the Newport Folk Festival.

I’m not saying that people who did get high and wear buckskin fringe jackets and listened to Dylan and so on weren’t hung-up, but the cliche prevailed — strictly embraced middle-class values and lifestyles and prohibitions were seen as a kind of prison.

I’m asking because I haven’t heard anyone accuse anyone else of being hung-up for decades. Excluding Republicans and conservative psychos like Lauren Boebert, are people hung-up about anything these days?

I think they are, yeah.

The first Urban Dictionary definition of “hung-up” reads as follows: “When all you think about is one person, and you can’t stop thinking about them.” The fourth definition: “Stereotyped, repetitive and seemingly purposeless movements. Compulsive fascination with and performance of repetitive, mechanical tasks, such as assembling and disassembling, collecting, or sorting household objects.”

Here’s another definition: “When you’re locked into processing the world according to (I’m sorry to mention this but it just came to me) woke doctrine….when all you can think about is whether this or that person or activity or political position is on the right side (i.e., yours)…when delivering or creating social justice for oppressed or less fortunate people and/or punishing their oppressors is pretty much everything.”

Note to Jagger: It’s Pronounced Meh-LAHN
If you're Italian it's pronounced Mee-LAHN-oh, but English speakers pronounced it Meh-LAHN. (The LAHN rhyming with "on" or the opposite of off.) Regretfully, Mick Jagger pronounces it Meh-LAN -- LAN rhyming with sand or Anne or tin can. Rich-as-Cresus Jagger has been running with the elites for over 55 years. He knows exactly how to correctly pronounce Milan, but from a personal perspective it's more important for Jagger to sound like an unpretentious middle-class British kid from Dartford, Kent, or to sound authentically himself. Login with Patreon to view this post
June 20, 2022 1:21 pmby Jeffrey Wells
No Comments
Reminder

As it happens two of 2022’s finest films so far, Chloe Okuno‘s Watcher and Audrey Diwan‘s Happening, begin streaming tomorrow — Tuesday, 6.21. Both directed by women, of course, and both, coincidentally or not, are IFC releases. These films are X factor — they stick to your ribs. Plus Watcher is a ’60s or ’70s Roman Polanski film.

Victimhood Made Delightful
I can't find the link, but Cosmopolitan critic Liz Smith did apparently write a few lines about Martin Scorsese's Taxi Driver, and one of them said that Jodie Foster's performance as Iris, a 12 year-old Lower East Side prostitute, was "delightful."

I can’t fully convey…I can’t even half-convey what a pleasure it’s been to watch Lightyear (a) piss off traditional fans (Chris Evans…what happened to Tim Allen?), (b) inspire a Toronto theatre manager to post a warning, (b) trigger homophobes with a harmless lesbian kiss and then (d) open to a lousy $51 million domestic — a good $25 if not $30 million short of what handicappers had projected. And I never even saw the damn thing…that’s the best part! 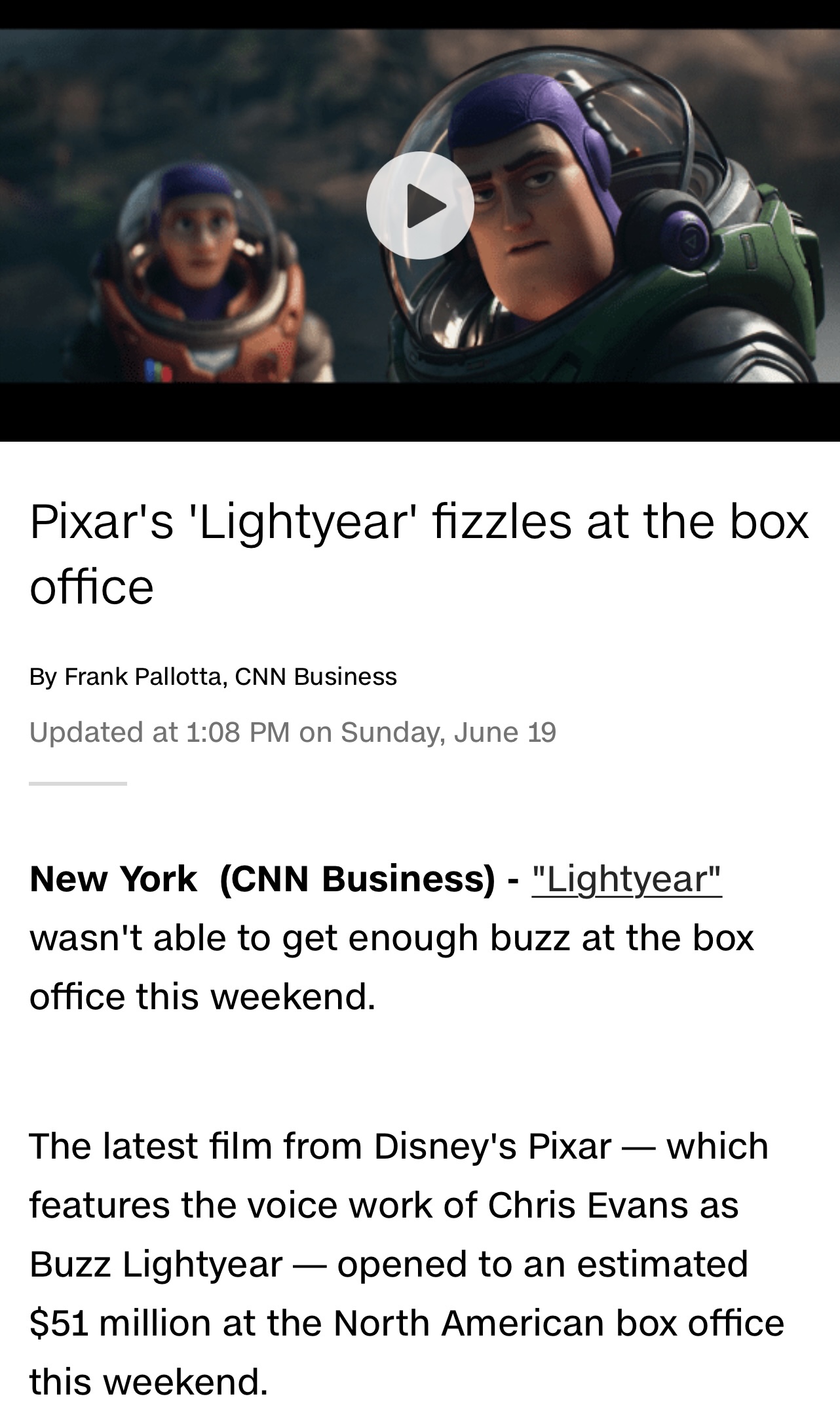 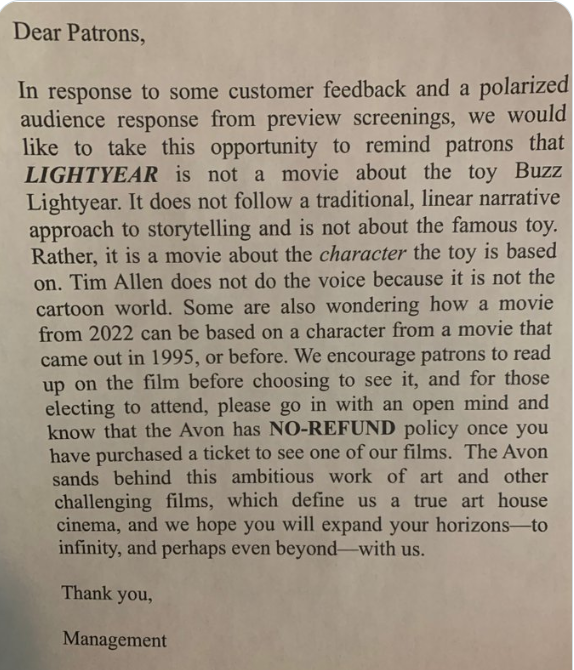