Latest Failure-of-“Bros” Analysis
"The public, by now, has become wary of anything Hollywood puts out for fear of it being what most people call 'woke.' That means it will have some kind of 'do better' agenda somewhere in there. Login with Patreon to view this post
October 6, 2022 2:58 pmby Jeff Wells
16 Comments

…and you can barely feel it. Because in a certain sense, it isn’t quite “there.”

Remember that old story about Marlene Dietrich calling Fred Zinnemann to tell him that mobs of people were lined up for an opening-night showing of From Here to Eternity at Loews Capitol (B’way & 51st) and Zinnemann said “but there hasn’t been any promotion and publicity!” and Dietrich telling him “they can smell it”?

That’s what’s not happening with TAR right now. No one can “smell” a thing apart from highly suspicious assertions from critics (whom no one trusts at all) that it’s very good. And the safe assumption that Cate Blanchett is going to be Best Actress-nominated. Which I agree with.

I’m not sure which trailers are more depressing to me personally — Black Panther: Wakanda Forever (Disney, 11.11), Black Adam (Warner Bros., 10.21) or Halloween Ends ((Universal, 10.14). They all feel like ironclad guarantees of this or that kind of dungeon entrapment.

The only trailer I can think of that doesn’t send me into a tailspin is Ticket to Paradise (Universal, 10.21), but that’s only because it promises a familiar and amiable ride — the bickering Bickersons (George Clooney, Julia Roberts) in Bali, trying to dissuade their daughter (Kaitlyn Dever, who doesn’t resemble either of them in the slightest way) from marrying a guy she doesn’t know all that well. The trailer says “this movie will not bite you or make you feel badly…it’ll be an easy sit.”

I was just thinking how I’d like to see Todd Field‘s about-to-open TAR yet again, but then I realized it’s only playing in a couple of Manhattan houses (Loew’s Lincoln Square, Angelika) with the wide break delayed until 10.28. A friend who saw it with me in Telluride says she’s having trouble remembering parts of it…that certain portions have liquified or vaporized in her brain.

From Michael Cieply‘s “The Movies Are Playing An Insiders’ Game” (10.6):

“There’s no promise of an October blockbuster, like Venom: Let There Be Carnage or No Time to Die in 2021. Instead, the release schedule is peppered with tough little films of the sort that light up festivals, win awards and make critics fight — Tár, Till, The Swimmer, Call Jane, The Banshees of Inisherin, Armageddon Time and such.

“These are movies for insiders, to which outsiders — mass consumers — are invited on a very limited basis. That’s how the seasonal game is now played.”

TAR is such a brilliant, odd-duck, upper-stratosphere thing — elliptical and elusive, neither here nor there but at the same time alluring and fearless — that it makes insider types feel like outsiders.

It’s more about aroma than actual taste, and it refuses to come to you. And for a while that’s a turn-on…”piece by piece I’m putting it together,” you tell yourself during the first hour, “and eventually all the strands will come together…all will be revealed and known.”

Field is saying “no, you come to the film…it’ll require work on your part and maybe some feelings of uncertainty or frustration even, but when you finally get there you’ll feel sated and satisfied.”

Except a certain itchy feeling builds up as it goes along, and although TAR tantalizes and intrigues as it feeds you little hints of information and motivation (it’s basically about a brilliant Berlin-based conductor getting #Me-Too’ed to death) but without any of the meat-and-potatoes, Adrian Lyne-ish plot points and shock revealings that would tie it all together, at least for the dumb people in the room.

That’s what I didn’t like about TAR — it made me feel like a dumb-ass. I had to ask friends what had actually happened (or had seemed to happen) and even now I still don’t really get it. That’s why I want to see it for a third time, crazy as that might sound. Plus the fact that I love the cushy affluence of it all. The scarves, the great apartments, the five-star restaurants, the sublime lighting, etc. I wanted to move into TAR and never leave. 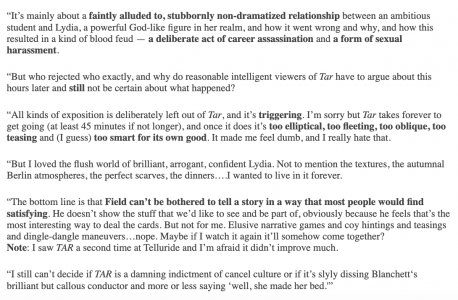 Ever since the accidental 8.20 car-bomb killing of Darya Dugina, the 29 year-old daughter of Vladimir Putin‘s Rasputin-like adviser Aleksandr Dugin, Ukrainian forces have been suspected of orchestrating the hit.

In a 10.5 interview with intelligence committee Democrat Jim Himes, a CNN anchor stated that “U.S. intelligence community believes that elements of the Ukrainian government authorized that car bombing.” (Note: It is believed that the explosion was intended to kill the father, not the daughter.) Without confirming this allegation, Himes replied that if it’s true “this raises the spectre of Ukraine having arguably [and] very clearly lost the moral high ground.”

Moral high ground? In a war? After the Bucha massacre? Is that a joke?

There is no morality in war save the absence of it. Once serious hostilities begin between combatants the idea of anyone occupying any moral high ground is ridiculous. As Russell Crowe‘s journalist character says in The Greatest Beer Run Ever, “This war is just one big crime scene.”

Union general William Tecumseh Sherman: “War is cruelty. There is no use trying to reform it. The crueler it is, the sooner it will be over.”

Do you want to defeat Russia in the Ukrainian conflict? Sean Connery‘s “Malone character” (from The Untouchables) has some questions.

Malone: “You said you wanted to get Capone. Do you really wanna get him? [If so], what are you prepared to do?”

Kevin Costner’s Eliot Ness: “Anything within the law.”

Malone: “And then what are you prepared to do? If you open the can on these worms you must be prepared to go all the way. Because they’re not gonna give up the fight until one of you is dead.”

Malone: “You wanna know how to get Capone? They pull a knife, you pull a gun. He sends one of yours to the hospital, you send one of his to the morgue. That’s the Chicago way! And that’s how you get Capone. Now do you want to do that? Are you ready to do that? I’m offering you a deal. Do you want this deal?”

Ness: “I have sworn to capture this man with all legal powers at my disposal and I will do so.”

…we will fire your ass in the blink of eye. This is what is known as management-level wokester terror.

From 10.4 THR piece by Ashley Cullins titled “Moral Clauses: Why a Red Scare Tactic Revived in the #MeToo Era Could Lead to a Fight With the Guilds“:

Excerpt: “In the wake of #MeToo, employers across Hollywood turned to morals clauses as an attempt to deter bad behavior. While these provisions have been criticized by talent reps for being too broad and too subjective, there’s actually a bigger problem with their presence in many contracts: They’re prohibited by the directors and writers guilds’ collective bargaining agreements — and they have been for decades.

“’The origin was the Red Scare,’ says talent lawyer Linda Lichter. ‘Companies put them in contracts so they could fire people if they were accused of being a Red. They’ve come back in the context of #MeToo.’

The clauses — which use language such as “public disrepute, humiliation, contempt, scandal or ridicule” — essentially mean anything that makes a company look bad could be grounds for immediate termination. Or, as Lichter puts it, ‘If you don’t behave, we can fire you.’

According to attorneys, it’s not uncommon for the first draft of a morals clause to include problematic broad phrases, giving examples like “neglects to govern their conduct with regard to social conventions” or “shocks, insults or offends a substantial portion of the community.”

“’Early on with the #MeToo movement we saw companies and brands going very quickly to terminating people, and they wanted to be able to rely on their morals clause to do it,’ says entertainment labor lawyer Ivy Kagan Bierman. “In some cases, the clause as drafted didn’t allow it because it had to be proven.”

I received a little pushback about yesterday’s riff about Florida governor Ron DeSantis wearing those awful white rubber boots during a tour of the coastal Florida areas devastated by Hurricane Ian.

I was informed that DeSantis is wearing standard-issue shrimp boots, which are common apparel for fishermen on shrimp boats. Moisture protection, snake protection.

My reply is that it doesn’t matter how many Cajun shrimpers own a pair of those Nancy Sinatra go-go boots — they look ridiculous.

Any allegedly straight male who wears white go-go-boots on a shrimp boat automatically causes his alpha male credentials too be questioned. And it WAS DeSantis’s Michael Dukakis on a tank moment (aka “Rocky the squirrel”).

If DeSantis was a MAN, he would have worn these black boots. If I was a shrimper, these would be my jam. 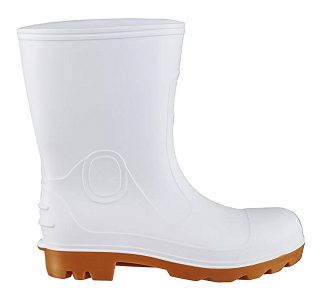 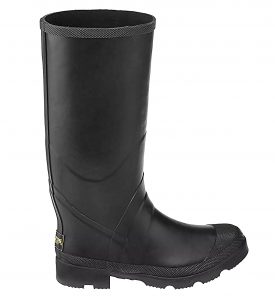 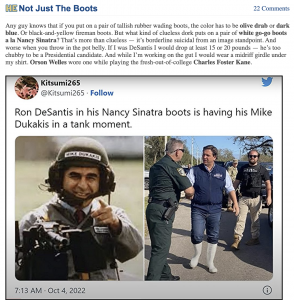