If I were to tell you that this is a nice Anglo Saxon barista who works at a nearby Starbucks, would that be okay? I’m sitting at a Starbucks right now, and the top guy has a beard and longish hair. I don’t know if they have Starbucks outlets in Jerusalem, but if they do I’m certain the guy at the counter wouldn’t resemble a cheerful Connecticut WASP.

“White Noise” Finale That Could’ve Been
Posted on 10.1.22: "The common consensus is that whatever you may think of Noah Baumbach’s White Noise, a dryly farcical ‘80s period drama set in an Ohio college town, the final sequence — an ambitiously choreographed dance sequence featuring shoppers at an A & P supermarket — is the highlight. Login with Patreon to view this post
November 22, 2022 2:15 pmby Jeff Wells
10 Comments
How Do You Stop Guys…

The answer is that you can’t. If guys want to wear these godawful things you have three options — (a) man up and roll with it, (b) avoid looking or (c) thank your host profusely, tell him/her how much you enjoyed the gathering and leave. No offense to the wearer. I just can’t stand mandals in any form.

Sitting second from right on the right side of the sofa is Cold War star Joanna Kulig. 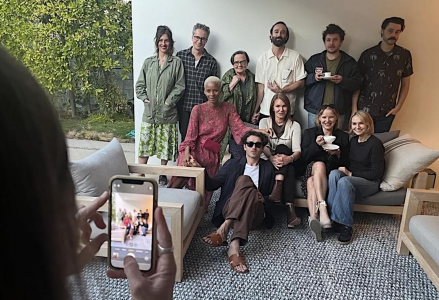 “I’m Gonna Get The Hell Out Of Here”
William H. Clothier's framings of John Ford's The Horse Soldiers ('59) are so visually pleasing...so wonderfully balanced and lighted, not to mention staged and edited to a fare-thee-well. First-rate filmmaking from an old-time era when 1.66 was still a celebrated aspect ratio. Login with Patreon to view this post
November 22, 2022 1:47 pmby Jeff Wells
17 Comments
Once More With “Gangs” Feeling

On this, the 59th anniversary of the assassination of JFK in Dallas, World of Reel‘s Jordan Ruimy has posted a recap of a Gangs of New York piece that was titled Gangs vs. Gangs, and which originally appeared in my Movie Poop Shoot column in December 2002.

I was told earlier today that the Gangs of New York Wikipedia page mentions a noteworthy piece by yours truly, posted in December 2001, that described the differences between a 1.37:1 work print version of Gangs that I saw on VHS vs. the final 2.39:1 release version. Here’s a link to the original article, and here’s a repost of it:

If Miramax Films and Martin Scorsese had decided to release a polished, cleaned-up version of the Gangs of New York work print they had in the can (or, if you want to get technical, that was stored on Marty and editor Thelma Schoonmaker‘s Avid) sometime in October ’01, we’d all be enjoying a better, more rewarding film than the Gangs that will open nationwide four days from now (12.20.02).

I’ve seen both versions and most of you haven’t, so I know something you don’t. The best Gangs of New York will not be hitting screens this weekend, and may never even be seen on DVD, given Scorsese’s apparent disinterest in releasing “director’s cut” versions of his films, or in supplying deleted scenes or outtakes or any of that jazz.

The work-print version is longer by roughly 20 minutes, and more filled out and expressive as a result, but that’s not the thing. The main distinction for me is that it’s plainer and therefore more cinematic, as it doesn’t use the narration track that, in my view, pollutes the official version. It also lacks a musical score, with only some drums and temp music.

This leaves you free, in short, to simply pick and choose from the feast of visual information that Gangs of New York is, and make of it what you will. And if that isn’t the essence of great movie-watching, I don’t know what is.

It also points out what’s wrong with the theatrical release version, which I feel has been fussed over too intensively, compressed, simplified, lathered in big-movie music and, to some extent, thematically obscured.

Miramax and Scorsese had the superior work-print version in their hands 14 months ago. It’s a little rough around the edges, but it’s not tremendously different from the version being released on Friday. It is only missing Leonardo DiCaprio‘s narration, a musical score and some CG effects, which tells me it could have easily been prepared for a December ’01 release. But Miramax decided otherwise and pushed it back it until now. If you ask me their reasons for doing so were short-sighted and wrong.

HE’s “B. Dog” (posted earlier today): “What’s missing? A sense of surprise. And the new trailer’s visuals, themes, dialogue, characters…none have changed. There’s a feeling of ‘haven’t we kinda seen this already?’ That said, they have to market this thing some way, right? So might as well go with ‘familiarity’ and a ‘Welcome back to the awe of Pandora’ strategy.

“I’m going to assume James Cameron and his writers have assembled some clever and compelling narrative suspense and structure under all this animated CGI stuff to drive more Avatar movies. I mean, one would hope. But it’s not evident in the trailers. At all.”

James Cameron to GQ‘s Zach Baron, as excerpted in a World of Reel post: [“Avatar: The Way Of Water is] very fucking [expensive]…the worst business case in movie history. It’ll have to be the third or fourth highest-grossing film in history [to become profitable]. That’s your threshold. That’s your break even.”

Ruimy: “Cameron has already mentioned that, if The Way of Water doesn’t break even (or earn roughly $800 million), he might stop making Avatar movies after the third, already completed one gets released.”

World of Reel commenter Richie Rich: “The story I’ve gathered from the trailer is that Jake and his family had to leave the forest and move in with the water people. So now they have to learn ‘the way of water’. And I’m sure some bad guys (who may or may not have been the ones who forced them out to the forest) will come to disrupt their new lives leading to Jake and family fighting with the water people against said bad guys.”

An article in the January 2023 issue of Empire dishes about de-aging tech used for the still-untitled Indy 5 flick, which stars the 80 year-old Harrison Ford in the title role.

I’ve always understood that Jones was born sometime around 1900, and so Ford (roughly 38 or 39 during the shooting of Raiders of the Lost Ark) will be inhabiting the 44 year-old archeologist in the forthcoming James Mangold film (Disney, 6.30.23).

The Indy 5 prelude is set in an old castle and involves Nazi antagonists. A blend of old footage plus anti-aging tech was used to make Ford look 44, or roughly how he appeared in Witness (’85) and The Mosquito Coast (’86). Ford was born in 1942.

Ford to Empire: “This is the first time I’ve seen [de-aging technology] where I believe it. It’s a little spooky. I don’t think I even want to know how it works, but it works.”

After the opener, Indy 5‘s story will advance 25 years to 1969, when Jones is supposed to be roughly 69. So Ford will be playing ten years younger than his actual age, which shouldn’t be a problem. 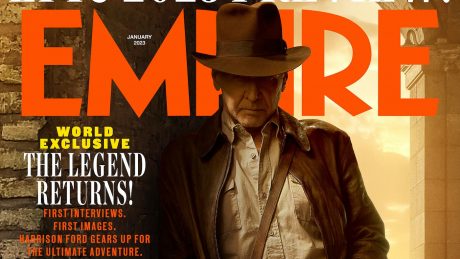 Two days after The Hollywood Reporter‘s Scott Feinberg managed to apologize his way out of a #MeToo Harvey Weinstein kerfuffle, another incident has blown up with Wakanda Forever star Letitia Wright, due to Feinberg having written about Wright having award-season baggage due to allegedly promoting anti-vax messaging.

“You’re all incredibly disrespectful“, Wright has stated on Instagram. “This is vile behavior. Stop your disgusting behavior.”

It has to be acknowledged that Wakanda Forever is a very difficult sit (or at least it was for me), and that in a sane world no one would even be flirting with the idea of nominating Wright for anything….please.

Here’s how The Direct‘s Klein Felt reported the conflict: 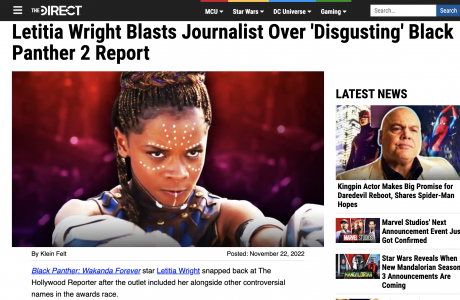 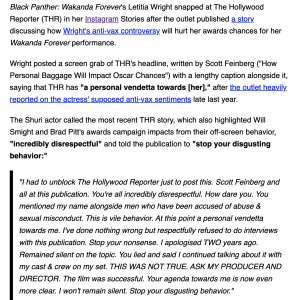 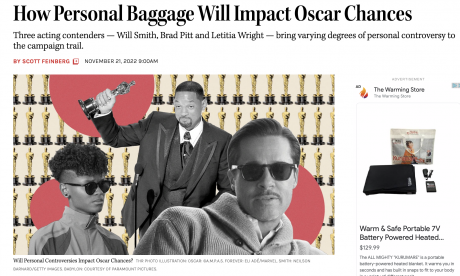 Back in the old days (i.e., seven or eight years ago and earlier) the Spirit Awards were known as the hip Oscars. Now they’re a secular award forum for the Woke Branch Davidians.

The Spirit Award nominations popped today, and what an inexplicable setback for The Whale‘s Brendan Fraser, who was expected to pick up an easy Best Lead Performance nom on his path to the Oscars.

If the Spirits were still adhering to gender categories, Fraser would have certainly been nominated for Best Actor.

But even under current gender-free system he still should have been nominated. Fraser plays a massively overweight gay guy (two woke points in one character) plus he has his emotional comeback narrative. What was the problem exactly?

On top of which the Spirit Davidians backhanded Danielle Deadwyler’s powerful performance as Mamie Till in Chinonye Chukwu’s Till. They brushed aside a major BIPOC performance in a film about the most searing incident in the 1950s and ’60s Civil Rights movement?

As things currently stand, the Spirit Davidians have announced ten nominations for Best Lead Performance, and only two honor male performances — Aftersun‘s Paul Mescal (a performance that I hated with a passion) and The Inspection‘s Jeremy Pope (which I still haven’t seen).

Here are the nominees along with HE’s boldfaced preferences in each category: